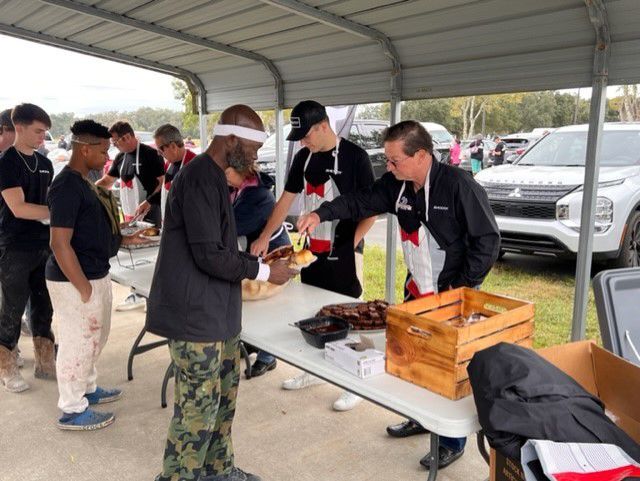 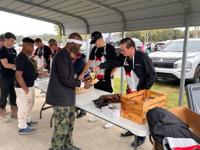 Monterey and Blackfin Boats’ President Bobby “Robert” Pita (right) passes out food to employees on Nov. 9 during a celebration lunch to commemorate Blackfin’s upcoming 50th anniversary next year. Pita was one of several executive staff members who served over 600 employees in attendance at the luncheon. 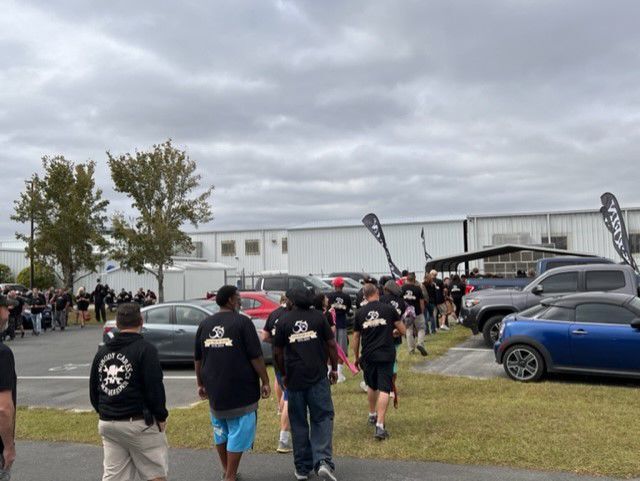 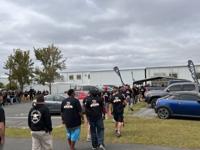 Employees at Monterey and Blackfin Boats are seen lined up on Nov. 9 as they wait for a plate of food. A celebration luncheon was held at the facility to commemorate Blackfin Boats’ upcoming 50th anniversary next year.

Monterey and Blackfin Boats’ President Bobby “Robert” Pita (right) passes out food to employees on Nov. 9 during a celebration lunch to commemorate Blackfin’s upcoming 50th anniversary next year. Pita was one of several executive staff members who served over 600 employees in attendance at the luncheon.

Employees at Monterey and Blackfin Boats are seen lined up on Nov. 9 as they wait for a plate of food. A celebration luncheon was held at the facility to commemorate Blackfin Boats’ upcoming 50th anniversary next year.

WILLISTON — The skies may have been gray, but that didn’t dampen the mood at Monterey and Blackfin Boats on Nov. 9.

This coming year, Blackfin Boats is set to celebrate 50 years of being in business after first launching in 1973. And to commemorate the milestone, a celebration was put together that featured a special lunch for over 600 of the manufactures’ employees.

“It’s an opportunity for us to share with them the benefits of our growth and to acknowledge them,” Bobby “Robert” Pita, Monterey and Blackfin Boat’s president, said. “Recognize them for their contributions.”

“All this wouldn’t matter if it wasn’t for all them,” he said.

Employees could be seen lined up outside in the parking lot and all the way down past the main entrance of the building as they waited in line for a plate of food. Rene Moore, brand manager for Monterey and Blackfin Boats, said executive staff members, including Pita, were the one’s who served the employees underneath the food tent.

Additionally, on top of the lunch, which was provided by Hill’s BBQ & Catering out of Gainesville, each employee also received a Blackfin t-shirt, according to Moore. On the back, the shirts read, “50 legendary years, 1973-2023.”

“It’s really exciting,” Pita said when asked what the 50-year milestone meant to him. “It’s exciting watching people come to work and learn and grow.”

Pita said they have been able to increase their number of employees to 625.

“Many of those are producing Blackfin Boats,” he said. “They are what make the whole thing happen.”

According to Moore, a good majority of these employees come from the Tri-County area.

“We all work together as a team, each building off each other’s efforts to produce, sell and market some of the best boats on the water today,” she said. “And I am very thankful we were all able to come together and celebrate this milestone. This is an exceptional group of people we have working here.”

Pita said Monterey and Blackfin Boats are “separate companies” but are under the same ownership of a parent corporation, Seabring Marine Industries Inc. Furthermore, the two are also produced “on separate product lines” and have different brands.

The two manufactures operate out of the same facility in Williston, which Pita said is roughly 300,000 square feet. The area itself is 40 acers.

As for Blackfin Boats, Pita said the manufacture has become one of the leading saltwater fishing brands in the U.S.

“Probably the fastest growing of the premium fish brands right now,” he added.

Pita said they construct, as far as Blackfin, boats that range anywhere from 22 to 40 feet in size.

Following the build process, which Pita said includes creating their own cabinets and upholstery for the vessels, the boats are sold and dispersed to a “dealer network.” The supporting dealers will then sell the boats to retail customers.

“We actually ship internationally,” he said.

Pita said in addition to going all over the world, they also have a dealer locally, as well. Miller’s Marine in Ocala is the one he referenced to.

“We’ve had a great relationship with them for many years,” Pita said.

When it comes to the shifts or transformations in the creation of boats or the market over the years, Pita said one of the more significant changes he has seen has been the rise in expectations and demands from consumers.

“That causes competition with the boat builders to pay attention to what customers want,” he said. “The ones that do a better job figuring out what the customers want and how to deliver grow and succeed.”

“We’ve been fortunate to do that,” Pita said.

Pita also went on to describe the changes and differences in boats now compared to several years ago. He said these changes include electronics and how boats are made.

“A lot of changes in the quality of the materials and the upholstery,” Pita said.

To learn more about Monterey and Blackfin Boats, visit www.BlackfinBoats.com and www.MontereyBoats.com.