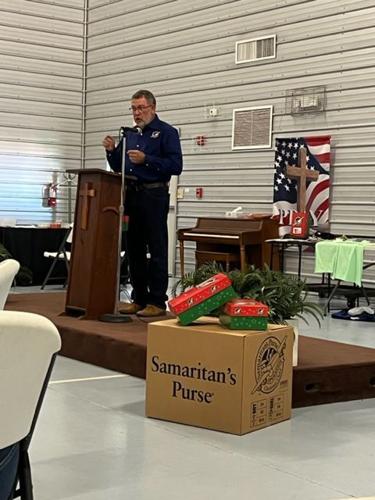 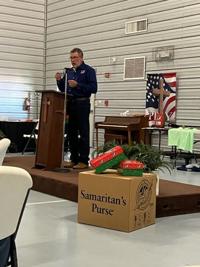 Jonny Johnson, area coordinator for the Nature Coast region of the Operation Christmas Child project covering Levy, Gilchrist, Dixie and portions of Alachua County, speaks to project leaders during a kickoff event on Saturday at Bethel Baptist Church in Trenton.

The Operation Christmas Child project kickoff event saw a number of attendees on Saturday at Bethel Baptist Church in Trenton.

Jonny Johnson, area coordinator for the Nature Coast region of the Operation Christmas Child project covering Levy, Gilchrist, Dixie and portions of Alachua County, speaks to project leaders during a kickoff event on Saturday at Bethel Baptist Church in Trenton.

The Operation Christmas Child project kickoff event saw a number of attendees on Saturday at Bethel Baptist Church in Trenton.

TRENTON — While Christmas is still a few months away, some folks in the Tri-County area are already beginning to plan for the holidays.

On Saturday, a number of folks from surrounding churches in the Tri-County area gathered at Bethel Baptist Church in Trenton for a project-leader workshop discussing one of the ministry projects of Samaritan’s Purse, Operation Christmas Child. The session was a kickoff event and provided leaders – as well as others – an opportunity to learn more about the project and what it entails.

Jonny Johnson, is the area coordinator for the Nature Coast region of the project, which covers Levy, Gilchrist, Dixie and portions of Alachua County. He said in a phone interview that the churches come together and pack shoeboxes and ship them worldwide to children in need. Additionally, the project doesn’t just involve the churches in this area, but those from around the world.

“Samaritan’s Purse is big into disaster relief,” Johnson said, as he spoke in front of those in attendance on Saturday. “They go wherever in the world where there’s earthquakes, hurricanes, tornados, fires, floods (and) droughts.”

Johnson said Operation Christmas Child is probably the largest project – Samaritan’s Purse also has several others that deal with education and health assistance for folks as well as help for military families going through marital problems brought on by the time and experiences in the service – the organization has.

“A lot of people think that Samaritan’s Place is a humanitarian organization,” he said.

But the organization does more than just giving. Johnson said it is also an “evangelistic group.”

“We tell people about Jesus,” he said. “That’s our main priority. “Let people know about Jesus and try to win them to him.”

As for Operation Christmas Child, Johnson said there is a team set up in every area for the project. These teams include: Church relations, student relations, which gets the schools along with the students involved, and logistics, the “collection of all of the shoe boxes.” There are also “community groups” and a media coordinator.

Johnson said every team has a faciliatory and there are numerous people in each group.

“It takes a lot to make all this happen,” he said. “And we’re in need of people in each one of these areas.”

While the organization is seeking help for multiple roles, according to Johnson, the biggest need is prayer team members.

Last year, Johnson said the goal was to pack 13,000 shoeboxes for this area. They exceeded that number, filling up 13,915. Furthermore, 625,975 shoeboxes were gathered in both Florida and Puerto Rico combined. In the U.S., 9,127,591 shoeboxes were collected.

“This is something that I’m passionate about,” he said. “It has to do with God’s Kingdom around the world. And I’m a part of that. And so are you.”

Johnson told the project leaders that the goal for the Nature Coast region this year is 17,000 shoeboxes. And there is a reason for the number.

“I didn’t just pull this number out of the air, “ he said. “I’ve kind of done my math and what we can expect this year. I think it’s obtainable. I really do.”

Johnson believes if more people join in the project, the better chance there is at increasing the number of shoeboxes.

“More people are involved,” he said. “We’re able to reach more churches as far as letting them know about Operation Christmas Child.”

According to the Samaritan’s Purse website, National Collection Week will take place Nov. 14-21, as over 4,500 drop-off locations will be open around the country for folks to drop their filled shoeboxes. For more information about Operation Christmas Child or Samaritan’s Purse, go to www.samaritanspurse.org.