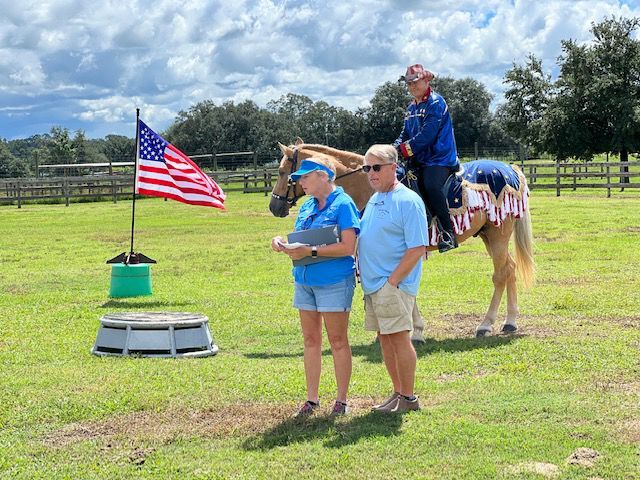 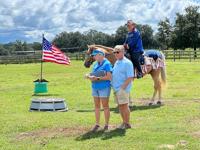 Beauty’s Haven Farm and Equine Rescue Inc. President Theresa Batchelor and her husband, Bob, speak to the crowd prior to a performance by owner/trainer Rafael Valle and Ivory Pal (back), a golden palomino champion Tennessee walking horse stallion, during the organization’s 11th annual Open House Saturday in Morriston. 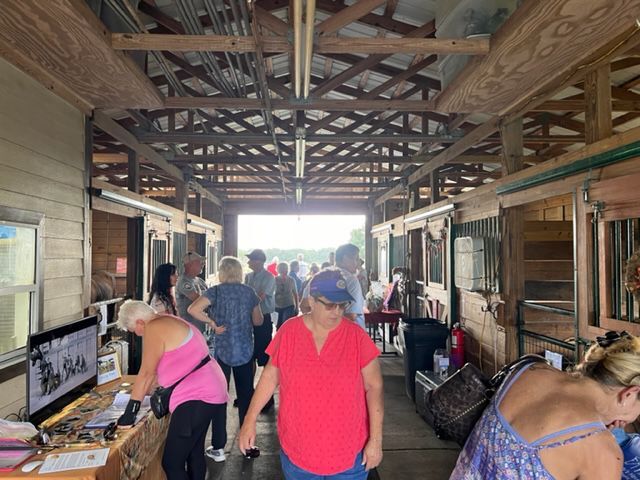 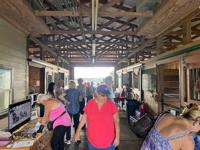 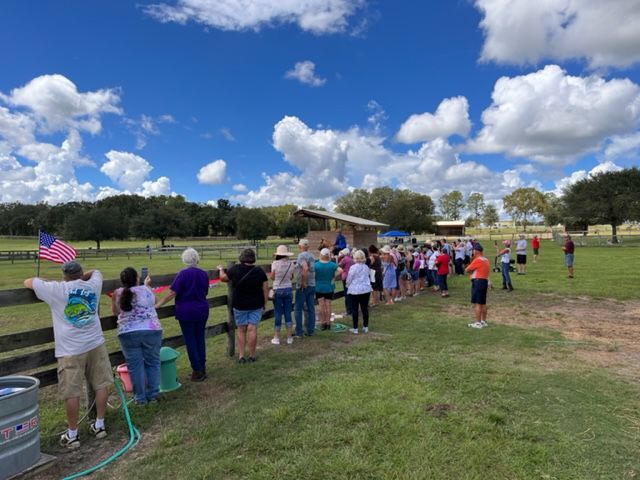 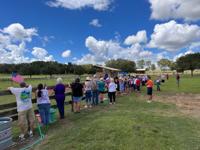 Beauty’s Haven Farm and Equine Rescue Inc. President Theresa Batchelor and her husband, Bob, speak to the crowd prior to a performance by owner/trainer Rafael Valle and Ivory Pal (back), a golden palomino champion Tennessee walking horse stallion, during the organization’s 11th annual Open House Saturday in Morriston.

MORRISTON — Over 100 people made their way to Beauty’s Haven Farm and Equine Rescue Inc. on Saturday in Morriston for the organization’s 11th annual Open House.

The event featured a silent auction, raffle items, a DJ and food vendor. Additionally, those in attendance also had a chance to get up close and personal with a few of the horses on the farm.

Theresa Batchelor is the president of Beauty’s Haven Farm and Equine Rescue. She said in a phone interview the normal average turnout for this event is about 100 to 120 people. On Saturday, the open house brought close to 200.

“There were more people from the local community this year than I think there normally are, which is really good,” she said. “We try to get community involvement.”

“We do this every year to try to raise money to help the expenses here at the rescue,” Theresa said of the open house.

About two hours into the event, folks began making their way over to one of the horse arenas located on the property for a feature presentation by Ivory Pal, a golden palomino champion Tennessee walking horse stallion. Owned, trained and loved by Rafael Valle, the horse, which is 25 years old, attracted quite the audience during the demonstration.

Pal and Valle performed to “America the Beautiful”, as Valle said it was in honor of all the veterans and to celebrate America.

“Ivory Pal came here, I want to say it was 13 years ago,” Batchelor said, noting that the horse also performed at the farm then. “He’s been a grand champion in many divisions. People just love him. He’s a people’s horse.”

Prior to the performance, Batchelor and her husband, Bob, took a few minutes to thank those lined up along the fence for attending. Furthermore, the husband and wife also welcomed Dee Wheeler to join them in front of the audience, where they presented her with a plaque.

Theresa said Dee and her husband, Doc, have been longtime supporters of Beauty’s Haven Farm and Equine Rescue. Doc is a World War II Navy veteran and has been going through health issues, which has stopped him from being able to travel.

“I wish he could have come,” Theresa said. “I really, really do. It would have meant the world to him.”

Theresa said Dee traveled from Tennessee, where she and Doc live, to attend the open house on Saturday.

“I’ve never met them,” Theresa said. “This was the first time I’ve met her.”

Beauty’s Haven Farm and Equine Rescue is a 501(c)(3) nonprofit organization. Theresa said their goal “is to rescue, rehab and rehome horses.”

“In the process of doing that, many times, we end up with horses that become sanctuary horses because they have special needs and just are not adoptable,” she said.

According to Theresa, the organization averages around 35 horses on any day.

“We don’t tailor to any particular breed...they all deserve a chance,” she said. “We usually take the worst of the worst. Horses that other rescues don’t want to take for various reasons. Usually, because it’s going to take too much money to rehab the horse or too much time.”

Beauty’s Haven Farm and Equine Rescue is in need of more volunteers to help with the organization. Additionally, Theresa said they are also hoping to get more participation from the community. This includes the younger generation, as well.

“We have tried to get kids in the schools involved because they are the horse owners of tomorrow,” she said. “They learn discipline. They learn so many things if they would just allow themselves to learn.”

“There are so many things that my husband and I, even outside of just caring for the horses, life skills that can be taught,” Theresa said. “We just can’t seem to get that community involvement, and I’m not sure how to go about it.”

The frustrations of not being able to get that engagement from the community is one reason why the husband and wife are looking to relocate outside of Levy County.

“We just don’t feel like we make a good enough difference,” Theresa said. “And we want to. We want to impact people’s lives.”

To learn more about Beauty’s Haven Farm and Equine Rescue and how to get involved, folks can go to the organization’s Facebook page @bhfer.