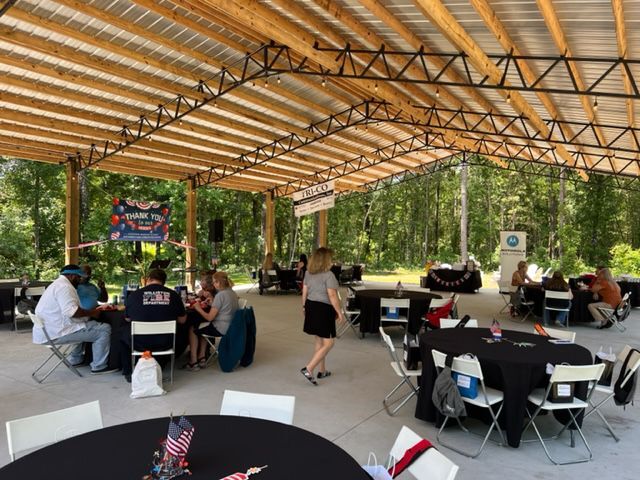 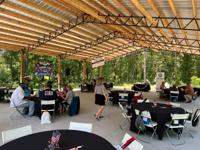 Those in attendance at the first responders appreciation luncheon eat and socialize while at Langan Acres on May 5. 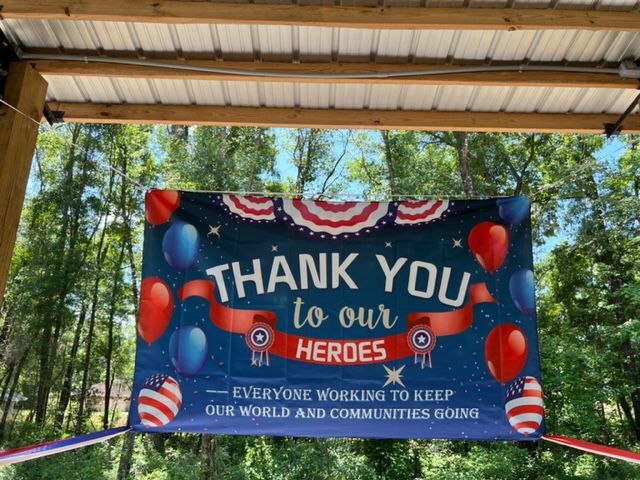 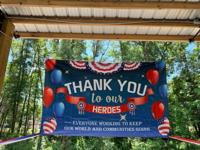 A “thank you to our heroes” banner is seen hanging at Langan Acres during the first responders appreciation luncheon held on May 5.

Those in attendance at the first responders appreciation luncheon eat and socialize while at Langan Acres on May 5.

A “thank you to our heroes” banner is seen hanging at Langan Acres during the first responders appreciation luncheon held on May 5.

WILLISTON — On May 5, first responders in Levy County were invited to come to a special event as a thank you for all they do in their communities.

Betsy Langan, who owns the business with her husband, Adam, said this idea came about after she was approached by John Velez, who is a Motorola sales executive for Tri-Co Communications Inc.

Additionally, Adam Langan is also a first responder in his own way as well, working as a lineman for a power company. And Betsy Langan said seeing firsthand how hard her husband works and the hours he puts in towards his job was another reason for her wanting to hold this event as well as getting involved in the community.

“When we opened our business, that was our priority,” she said. “We wanted to be involved. We wanted to be supportive. Not just to get people out to the property and utilize it. But to really feel like we were starting something that we could mold into just great relationships (and) friendships.”

Leverett said Tri-Co Communications Inc has been a member of the Williston Area Chamber of Commerce since 2019, and they have been looking for ways to get more involved. This is one of the reasons the company decided to jump on board and help sponsor this event.

Webb added to Leverett’s comments. He said they wanted to support the people who assist “our community.”

Tri-Co Communications Inc also wanted to show its appreciation to those who are making the sacrifice for others and are, as Webb said, “running into the burning buildings” and are covering miles on the highway.

Carolyn TenBroeck, who is the executive director of the Williston Area Chamber of Commerce, had a fairly similar response when asked why the chamber also decided to get involved with the luncheon.

TenBroeck said one reason was that May is Law Enforcement Appreciation Month. Secondly, starting Monday, it will mark the beginning of National EMS Week, which recognizes all of those on the medical front line.

Furthermore, TenBroeck also said it goes back to doing whatever the chamber can do to help the town and making “our community a better place.”

According to TenBroeck, this event is an example of how much people care about their community.

“When you have people who give up their days to help out for two to three hours, it shows the type of community we have,” she said.

Also on-site at the event was Heavy B’s Barbeque, which provided the lunch for all of those in attendance. Betsy Langan said they have helped out the chamber with events in the past, and when TenBroeck reached out about this one, the food truck was all in.

“To me, it is just a testament of like how many people in this community care about first responders and knowing that they are not just out there serving our community, but they are people,” she said. “They do have families. They do have lives. And they still continue to give.”

This was the first year an event like this was held for first responders in Levy County. When asked if they will continue it in the future, Betsy Langan said that is the goal. It was a fresh idea that turned into a handful of businesses wanting to get involved for a special event.

“We kind of just all came together and said, ‘you know, this is important,’” she said. “And the least we can do is serve those who serve us.”

“I would love to see it happen again,” Betsy Langan said. “We’ll just kind of have to see how it goes.”