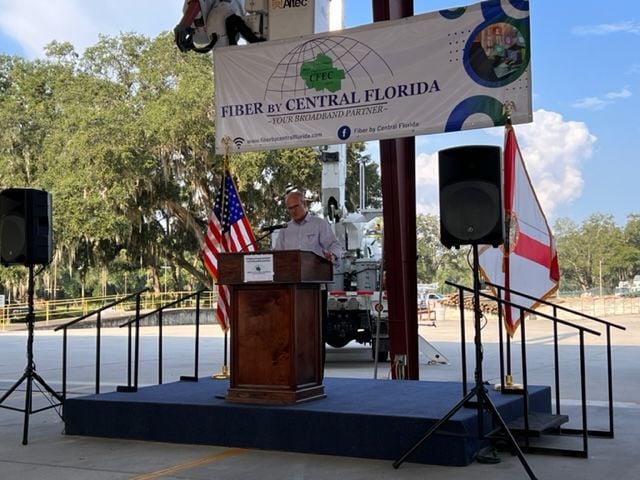 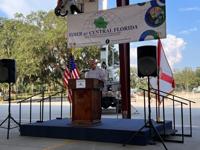 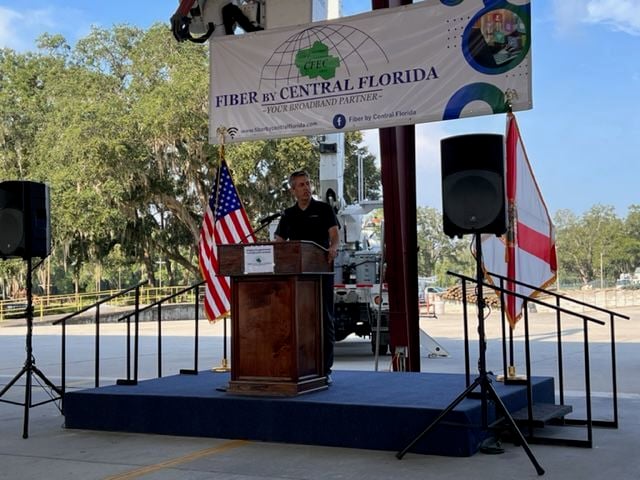 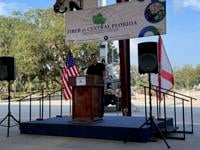 Jonathan Chambers, Conexon partner, addresses the crowd during Central Florida Electric Cooperative's Broadband Kickoff Event at CFEC Headquarters on Aug. 18 in Chiefland. According to a press release from CFEC, the utility company will be working in collaboration with Conxeon to design and build the fiber-optic system that will deliver needed access to high-speed internet for 100% of CFEC's consumers and communities.

Jonathan Chambers, Conexon partner, addresses the crowd during Central Florida Electric Cooperative's Broadband Kickoff Event at CFEC Headquarters on Aug. 18 in Chiefland. According to a press release from CFEC, the utility company will be working in collaboration with Conxeon to design and build the fiber-optic system that will deliver needed access to high-speed internet for 100% of CFEC's consumers and communities.

This comes following an announcement on Aug. 18 by CFEC during its Broadband Kickoff Event that was held at its headquarters in Chiefland. According to a press release sent out by CFEC, the utility company will be building a fiber-optic network over its current electric distribution infrastructure to issue vital access to high-speed internet for 100 percent of its members and communities.

A number of people attended the kickoff event, which featured comments from Denny George, CFEC general manager; Jonathan Chambers, Conexon partner; Chuck Clemons, candidate for State Representative District 22; and Kat Cammack, candidate for U.S. House of Representatives, Florida, District 3. Additionally, numerous officials and sheriffs as well as school board administrators from Dixie, Levy and Gilchrist County were all in attendance, as well.

The fiber-optic network, which will be established and ran by the newly created CFEC parent company, Fiber by Central Florida, not only will deliver the necessary Fiber-to-the-Home high speed internet assistance to each customer residing in the utility company’s region as well as, whenever feasible, to folks who are in the service of different power providers and live in the CFEC service zones, but it “will also be used to bolster the electronic distribution system, expanding CFEC’s electric smart grid,” according to the press release.

“The fiber backbone will be a key and critical part of our electric distribution system,” George said as he spoke to the audience, adding, “by providing for our ability to monitor key down stream equipment, voltage regulators, capacitors and reclosers will help us gain a platform for read meters and monitor home energy usage in the future and provide a system which we can self-heal for distribution automation, known also as smart grid, which will assist in the restoration of service.”

“CFEC chose Conexon for their expertise and years of experience in bringing Fiber-to-the-home (FTTH) systems to electric cooperatives like ours all over the nation,” the press release said.

The building of the fiber-optic network is scheduled to take three to four years and cost roughly $100 million, according to the press release. Though, George said they are aiming for the three-year mark. The fiber-optic network will extend across more than 4,300 miles of CFEC line, getting to costumers in Levy, Dixie, Gilchrist and parts of Alachua and Lafayette counties. Construction on the project is likely to start in the early months of 2023, with anticipation of internet services arriving to the first phase of fiber consumers by the end of 2023.

“As we move forward with this project, we will be reaching out to our community leaders, as we have been for the last year, and elected officials to help with getting the word out to the community and for their support as we apply for grant opportunities that will be needed in order to assist with the roll out,” George said.

Chambers said help with funding should be on the way.

“There is money coming,” he said, speaking to the audience. “The amount of money that needs to be invested by Central Florida Electric Cooperative – around $100 million – should be offset by the public funds that are meant to be spent for this very purpose. “Building a fiber network in the same manner electric Co-ops built electric networks in the 1930s and 1940s.”

According to the press release, there will be numerous price points for customers to choose from. This will ensure that high-speed internet service will be available to all people residing in the CFEC service areas, despite income. Costs are still being completed and will be shared with the public in the months to come.

“This project is a continuation of the commitment that CFEC first made 80 years ago to improve the lives in communities of those it serves,” George said. “Then with electricity. And now with broadband.”

Editor’s note: This story was published prior to the results from the Primary Election