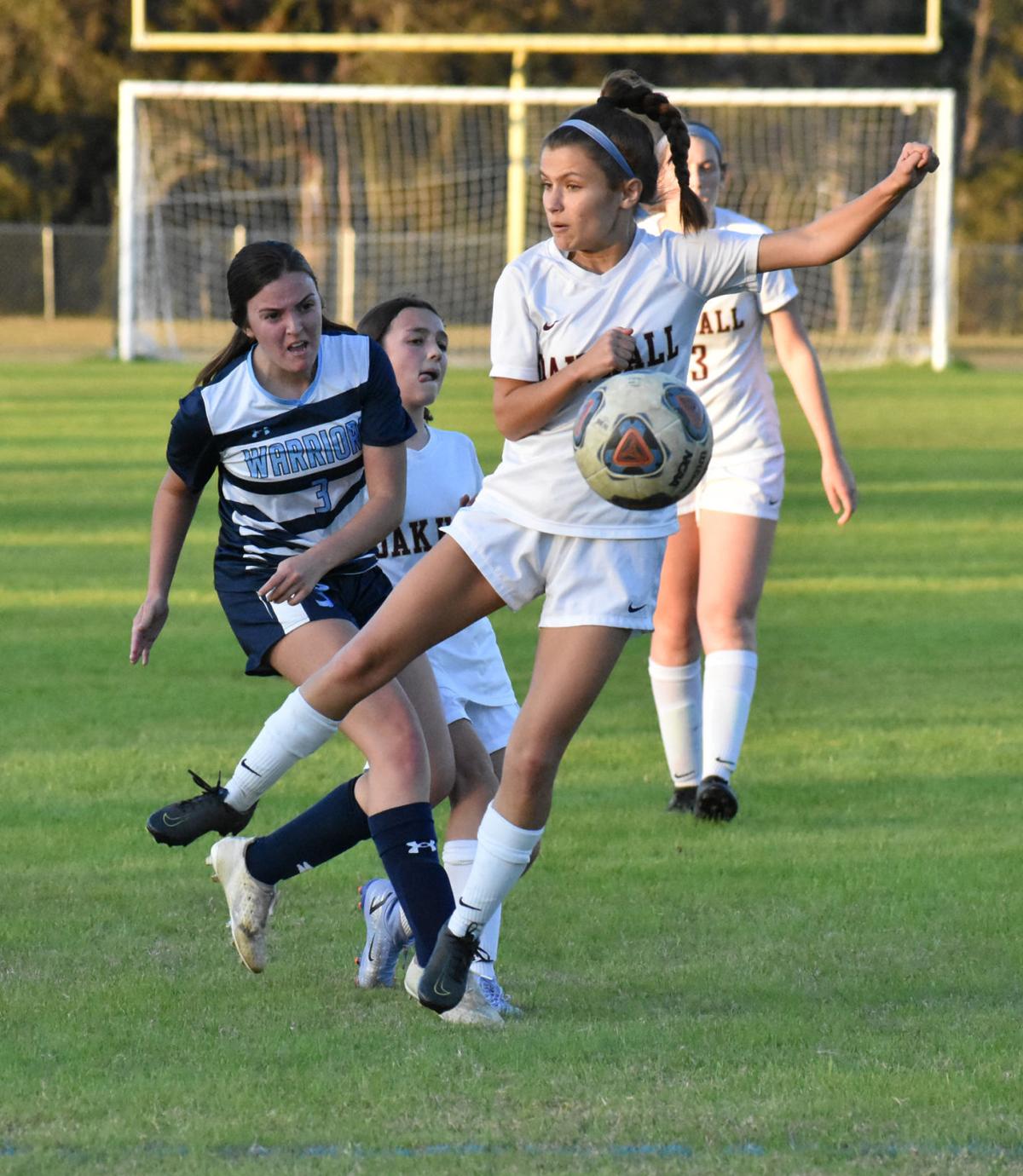 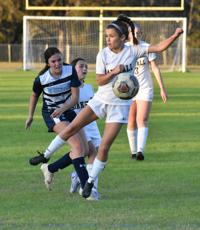 ABOVE: Melody Byers of Seven Rivers Christian, left, shoots the ball past Oak Hall’s Audrey Clark during Friday’s soccer match at Warrior Park in Lecanto. Byers scored a pair of goals in the 6-0 victory. RIGHT: Carmelo Cordero of Seven Rivers Christian, left, beats Peter Peloso of Oak Hall to the ball during Friday night’s match at Warrior Park in Lecanto, won 2-0 by the visiting Eagles. 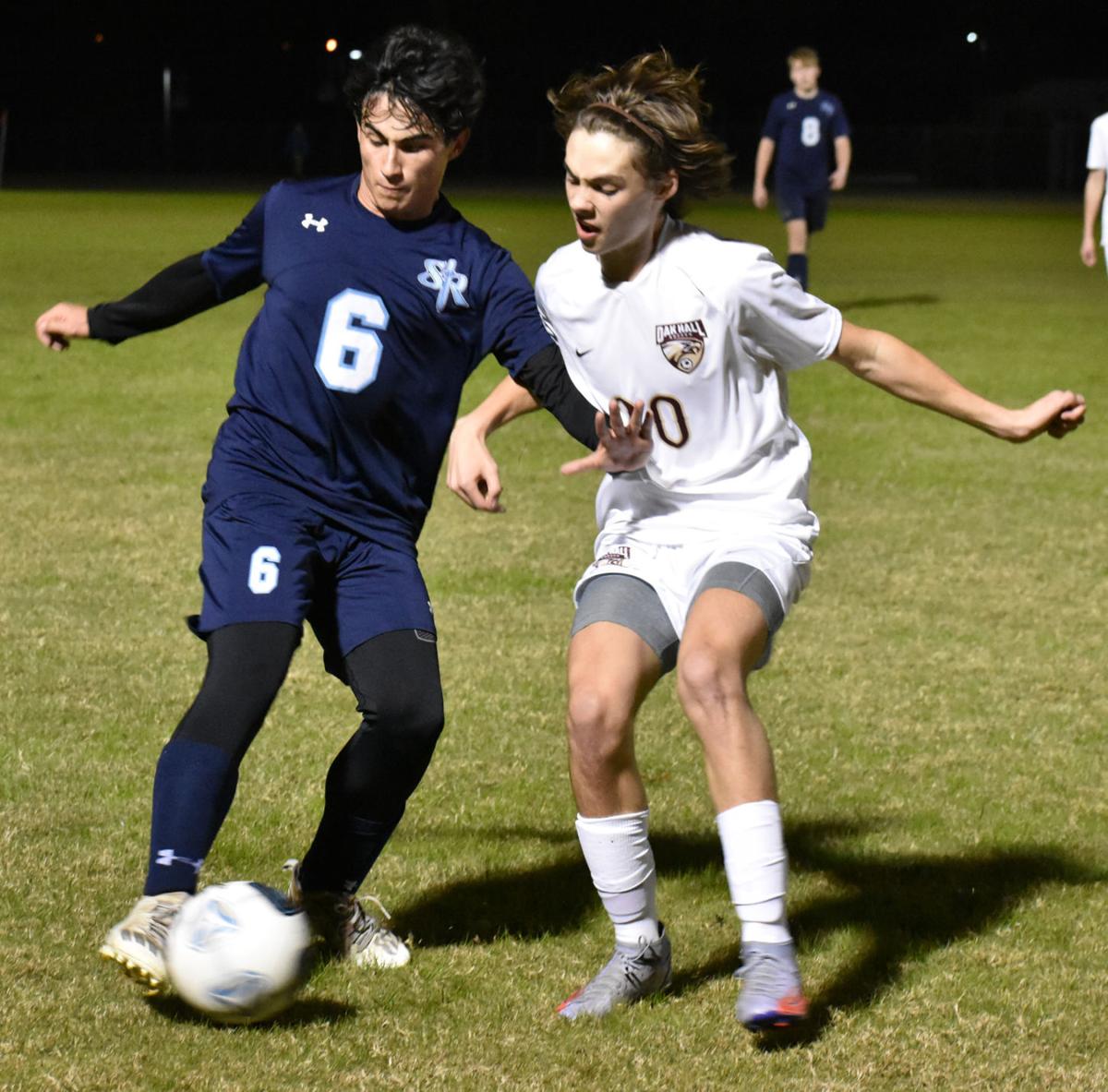 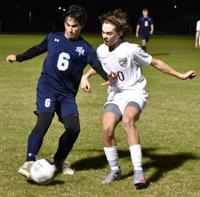 Carmelo Cordero of Seven Rivers Christian, left, beats Peter Peloso of Oak Hall to the ball during Friday night’s match at Warrior Park in Lecanto, won 2-0 by the visiting Eagles.

ABOVE: Melody Byers of Seven Rivers Christian, left, shoots the ball past Oak Hall’s Audrey Clark during Friday’s soccer match at Warrior Park in Lecanto. Byers scored a pair of goals in the 6-0 victory. RIGHT: Carmelo Cordero of Seven Rivers Christian, left, beats Peter Peloso of Oak Hall to the ball during Friday night’s match at Warrior Park in Lecanto, won 2-0 by the visiting Eagles.

Carmelo Cordero of Seven Rivers Christian, left, beats Peter Peloso of Oak Hall to the ball during Friday night’s match at Warrior Park in Lecanto, won 2-0 by the visiting Eagles.

LECANTO — The Seven Rivers Christian girls soccer team earned its third shutout victory of the season Friday night at Warrior Park, while the boys followed with a heartbreaking loss in the closing minutes.

Hosting Oak Hall out of Gainesville, the Warrior clubs split the doubleheader. The girls claimed a dominating 6-0 victory to improve to 9-1-1 on the season, while the boys fell to 3-5 with a 2-0 defeat at the hands of the Eagles.

It only took three minutes into the game for the Warrior girls to dent the scoreboard against Oak Hall.

Mckala Peters placed a perfect pass into the box to Reese McDougal, who easily slipped the ball past the goal keeper for a quick 1-0 lead.

Ten minutes later the Eagles were called for a hand ball in the box, which set up Melody Byers for a penalty kick. The Warrior converted her chance for a 2-0 lead.

“What I try to do is just put my head down and kick it with controlled power. I do look for a spot straight away,” Byers said. “I don’t really look to see if she leans one way or another, because I trust my shot.”

Just a few minutes later Kacie Cunningham made it 3-0 when she had a shot from Reese McDougal glance off her thigh and into the back of the net.

Late in the first half Byers tacked on her second goal of the night when she tapped in a rebound off the goal keeper on a shot from Peters. That made it a 4-0 score at the half.

In the final 10 minutes of the match, Karli Welter and Peters added goals for the 6-0 final.

Five Warriors scored in the victory.

“That’s exciting. We can’t just lean on one player for all of our goals, because then our opponents can shut that one player down,” head coach Rob McDougal said. “Having five different players score is exciting for us, to be able to score in different ways.”

Byers said the passing leads to offensive chances for many different players.

“I think we’re really hard to defend, just because of how well we work as a team. Our ability to pass is a strength,” she said. “You can tell when we pass to each other it’s with so much ease and we trust each other. When we put those things together it’s easy for us to score and hard to defend us.”

Coach McDougal said the offense gets the glory, but the defense did great work as well.

In the boys game, the Warriors and Eagles played even through the first 77 minutes. Each team had scoring chances but couldn’t convert and time of possession was fairly equal.

But with three minutes left in the match, the Warriors were called for a penalty in the box, which set up a penalty kick for Oak Hall.

Addis Kelly slipped the ball into the bottom left corner just past a diving Nehemiah Vann to put the Eagles on top 1-0.

Oak Hall added an insurance goal with 30 seconds left for the 2-0 road win.

“We were doing fine until we blew it at the end,” Seven Rivers coach Steve Meehan said.

Meehan was impressed with the play of the back line of his defense and Vann in goal, but knows the offense is limited and changes need to be made to help that side of the ball.

“We don’t have enough skill players, so we’re struggling,” he said. “We’re going to try and change our formation, what we’re running, and see if we can find something that will work.”

When do you take down your Christmas tree?