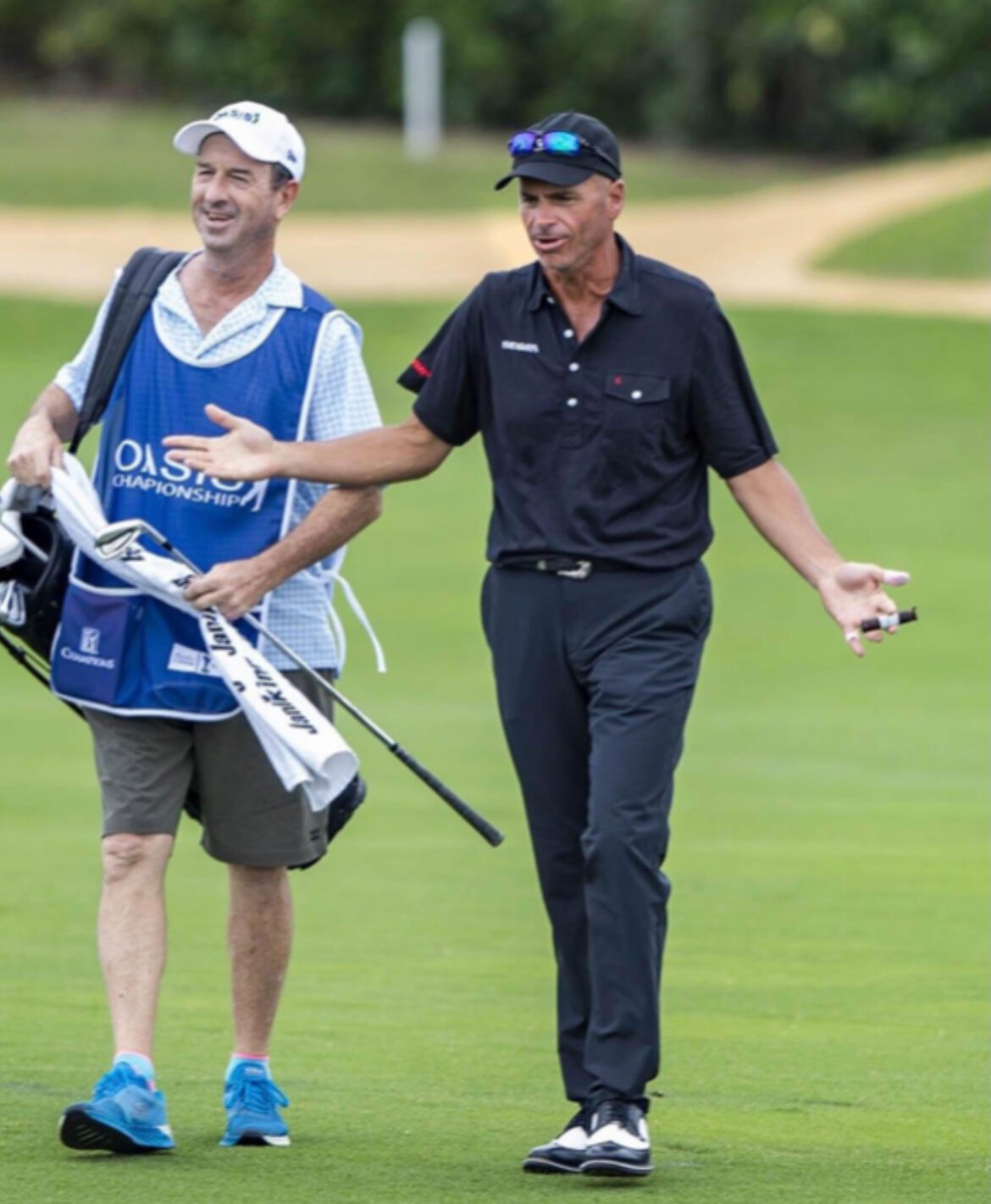 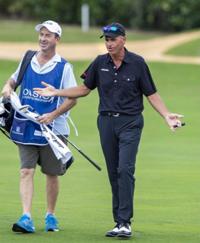 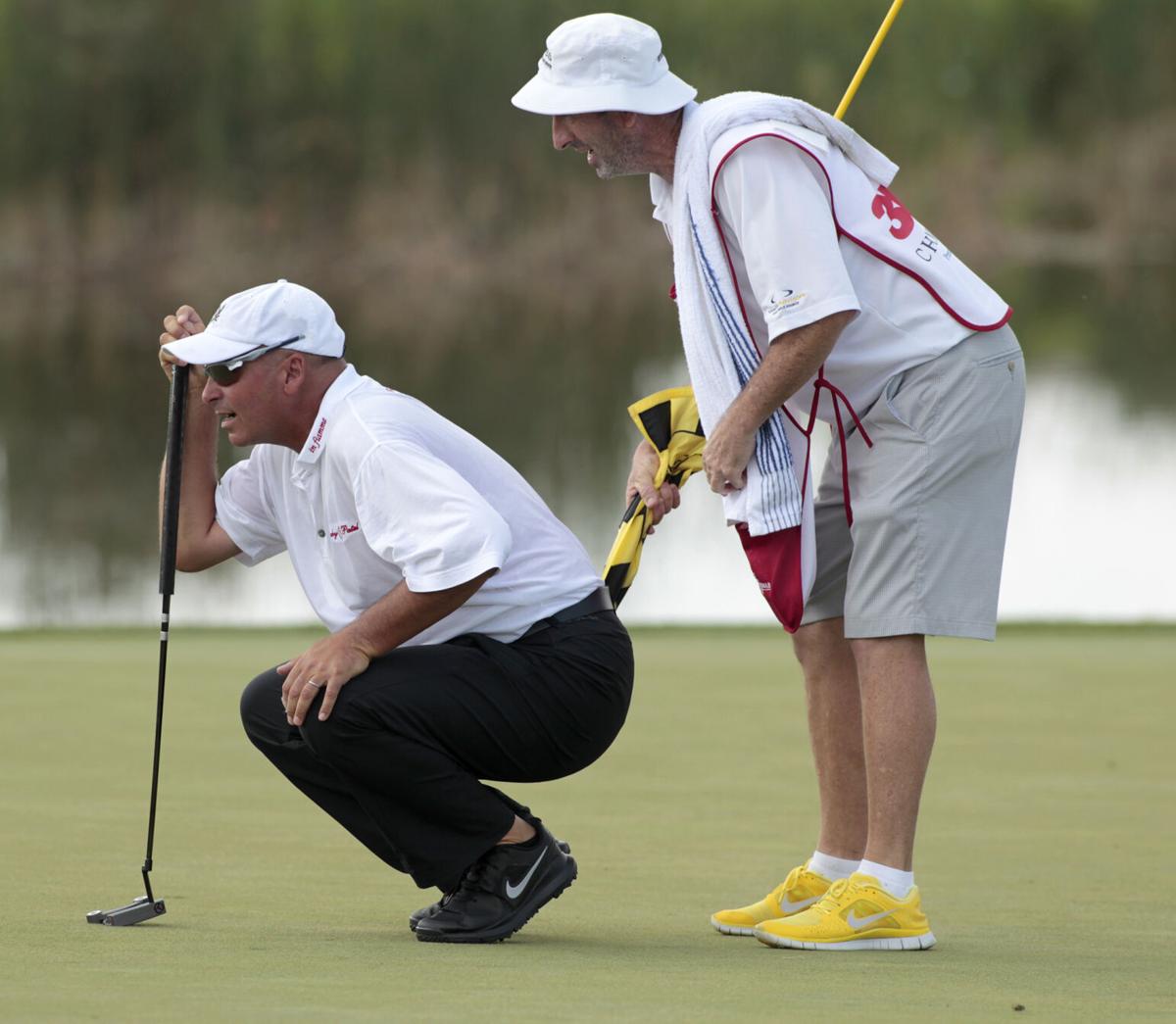 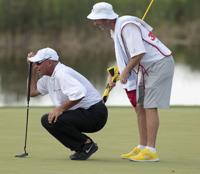 Rocco Mediate and his caddie Martin Courtois size up his putt on the ninth green during the second round of the Champions Tour's 3M Championship golf tournament at TPC Twin Cities, Aug. 2, 2014 in Blaine, Minn.

Rocco Mediate and his caddie Martin Courtois size up his putt on the ninth green during the second round of the Champions Tour's 3M Championship golf tournament at TPC Twin Cities, Aug. 2, 2014 in Blaine, Minn.

Martin Courtois won’t swing a club during the U.S. Senior Open this weekend and he won’t get to hoist a winning trophy.

But the 59-year-old Black Diamond resident hopes to play a role in a championship performance at Omaha Country Club. He’ll be on the bag for Jay Haas, trying to help Haas add to his 18 career victories on the PGA Tour Champions circuit.

"Jay at this stage of the game has done everything he sought out to do," Courtois said. "Now he’s trying to pile on top of what he’s done already.

"… I’m honored to caddy for someone of his stature. He’s won more than anyone I’ve ever caddied for."

The U.S. Senior Open is one of the five majors for the PGA Tour Champions, formerly known as the Senior PGA Tour and still often called by its old name of Champions Tour. The first round is set for Thursday.

Courtois brings 30 years of caddying experience to the course. The first time he ever worked on the PGA Tour was 1982, at what was then the Bing Crosby National Pro-Amateur but now the more familiar AT&T Pebble Beach Pro-Am.

That was local for him at the time; he’s originally from Castro Valley, California. He was about to go to the University of Wyoming on a basketball scholarship when another sport grabbed his attention.

"After basketball season I picked up golf," Courtois said. "My friend talked me into going. I always thought the sport wasn’t for me. It never had much appeal. But I gravitated toward it quickly.

Within a year of first picking up a club he was a scratch golfer, and in 1992 he played in the U.S. Amateur Championship.

He only lasted half a year at Wyoming, and upon returning from college he met a caddy named Dudley Logan, who Courtois said mentored him and "took my interest in golf to another level."

After caddying for a few years at Orinda Country Club in California, he moved on to other ventures. He ended up in North Carolina, opening up a large sports bar called T.J. Hoops. Additionally, he served as director of operations for the Pro Billiards Tour.

"I never depended on caddying being my sole source of income," Courtois said. "Ultimately it’s a very insecure profession."

However, around 1993 Courtois decided that he would devote the next 10 years to caddying and see where it took him. He had caddied for various golfers through the 1980s and built up many relationships.

"I’ve been blessed. The game has been great to me," Courtois said. "Some of the greatest players in the world are close friends of mine."

One of those in particular is Rocco Mediate. Courtois had worked with a variety of golfers up until 2007, when he first teamed up with Mediate.

"By the fifth week of us being together, he had a second-place finish at Bay Hill, which procured him full exemption status (on the PGA Tour) and off we went from there," Courtois said.

Courtois wasn’t there during Mediate’s most memorable performance, when he was the runner-up in the 2008 U.S. Open, losing to Tiger Woods in a dramatic 19-hole playoff. At that point Courtois had gotten involved in the then popular sweepstake business while living in Weeki Wachee, where he had moved to back in 1995.

Mediate called him in 2010 and asked him to return, and the two remained a pairing up until this April. The two are still good friends, Courtois said.

"I haven’t caddied for Rocco in his last tournament," Courtois said. "We’re just taking a hiatus."

There are other things to keep him busy. He moved to Black Diamond a year ago, and when the pandemic hit he spearheaded Caddies for a Cause, which through donations raised $100,000 to provide 78 caddies on the PGA Tour Champions with $1,450 stimulus checks.

Over the past few months he has caddied for a few different people, including Tom Lehman, and for the next few days he is with Haas.

"It’ll be a daunting task," Courtois said. "The golf course is tough, it’ll be very hot, the terrain is severe. I’d like to see us compete and have a chance at the end."