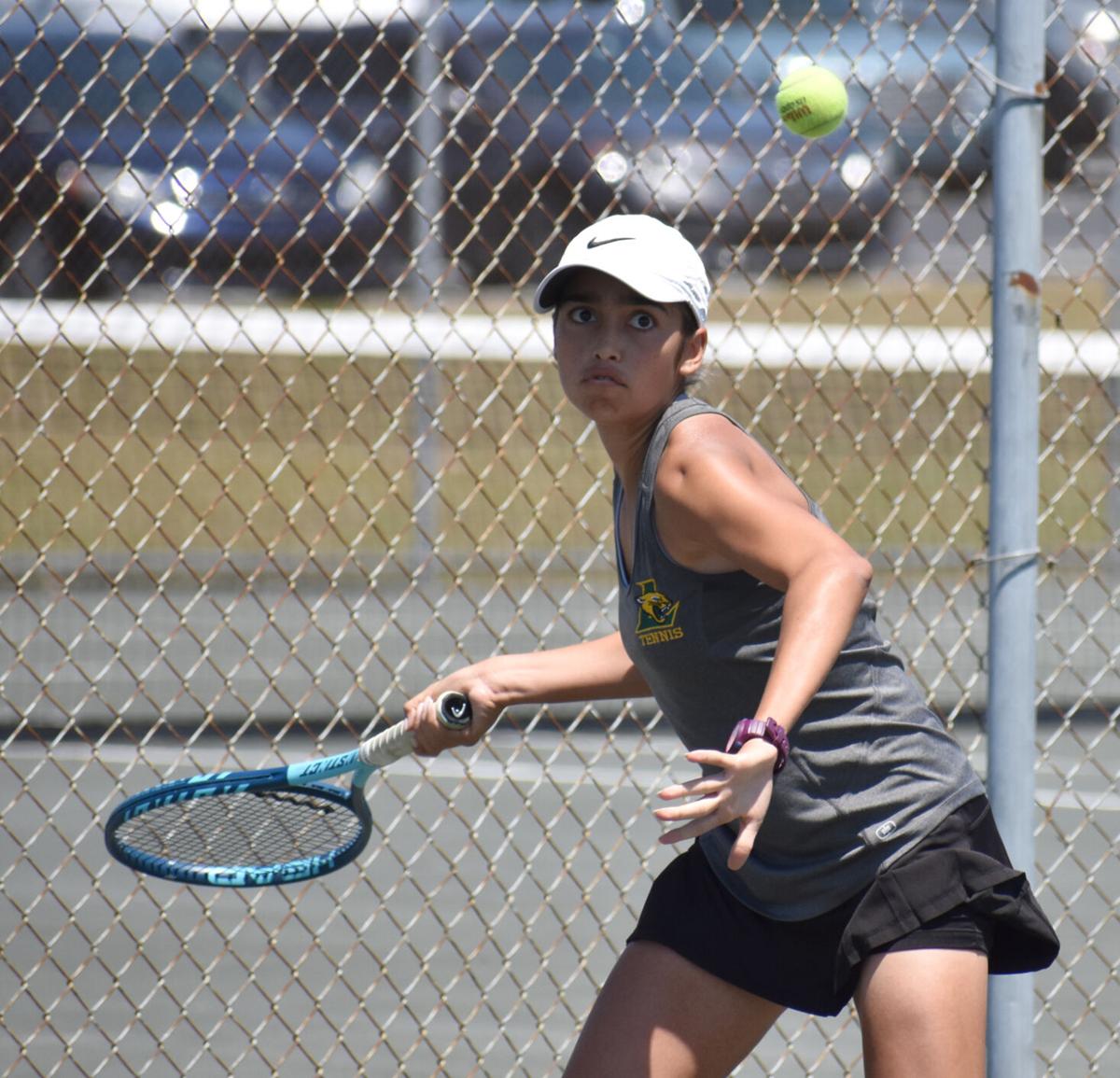 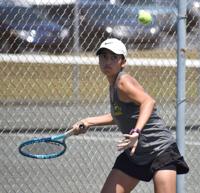 Mirabelle Tahiri of Lecanto gets set to hit a shot during the District 3A-9 No. 1 singles championship match Tuesday against Springstead’s Jolie Miller at Lecanto High School. Tahiri lost this match, but did win in No. 1 doubles with Nandini Karanam earlier in the day to advance to the state championships in doubles. The Panthers also won the district team title to move on to next week’s regional tournament. 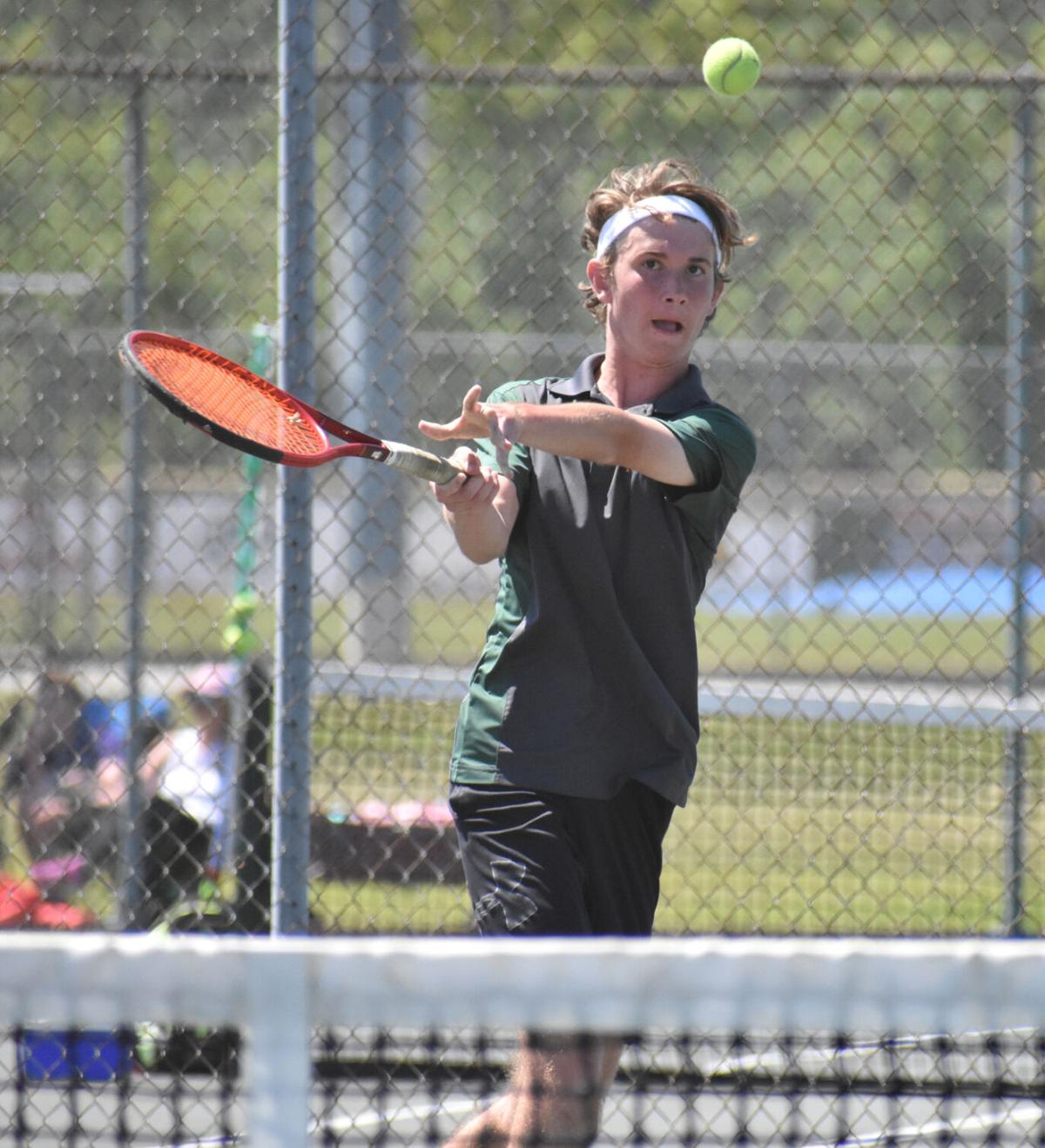 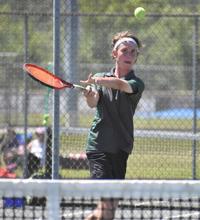 Austin Purinton of Lecanto hits a backhand shot during the No. 5 singles championship match Tuesday at the District 3A-9 tournament at Lecanto High School. Purinton defeated Mo Islam of Land O’ Lakes 6-4, 7-6 (7-4) for the title.

Mirabelle Tahiri of Lecanto gets set to hit a shot during the District 3A-9 No. 1 singles championship match Tuesday against Springstead’s Jolie Miller at Lecanto High School. Tahiri lost this match, but did win in No. 1 doubles with Nandini Karanam earlier in the day to advance to the state championships in doubles. The Panthers also won the district team title to move on to next week’s regional tournament.

Austin Purinton of Lecanto hits a backhand shot during the No. 5 singles championship match Tuesday at the District 3A-9 tournament at Lecanto High School. Purinton defeated Mo Islam of Land O’ Lakes 6-4, 7-6 (7-4) for the title.

LECANTO — As the Lecanto girls tennis team huddled around its newly won championship trophy, all five players could truly feel like they contributed.

That’s because before the team award was handed out, every Panther who competed in the two-day District 3A-9 Tournament at the Lecanto home courts had earned a district title either in singles or doubles action during Tuesday’s finals.

“I think it’s fabulous. They’ve worked really hard for it,” Lecanto girls coach Alice Christian said. “A lot of them do training too on their own time, so I think they deserve it for as much work and time as they put into it. Even better that they’re young and they’re still learning, which is great.

“We had several tiebreakers and two prevailed through it. It was tough and it’s hot out here, so it’s not an easy task to win those tiebreakers, especially when you’re beat down after two days of playing tennis. That was amazing.”

The Panthers went an impressive 4-2 in the finals, including a pivotal 3-0 in singles finals against opponents from Land O’ Lakes. The Gators went into the singles finals two wins behind the Panthers, 14-12, but Lecanto pulled away and finished with 17 victories.

“That is so good cause now regionals is here and it’s just something we’ve been training for the entire semester,” Lecanto No. 3 singles player Jahanvi Kompella said. “It’s a really nice feeling.”

Next Tuesday the Panthers will indeed host a regional semifinal, although two players already know they’re going to states.

Sophomore Mirabelle Tahiri and freshman Nandini Karanam teamed up to take the crown and an automatic state berth at No. 1 doubles, defeating Springstead’s Jolie Miller and Aszti Chadzynski, 6-4, 6-0.

That was a turnaround from last week’s Gulf Coast 8 Conference Tournament, when the Eagles’ pair beat Tahiri and Karanam in the finals, 8-6 in a pro set.

“I’m really excited. We played really good. It was kind of close in the first set but we kind of stuck together to pull it off and do really good in the second,” Tahiri said. “It’s really exciting because last year I was hoping to go, but then COVID canceled our season. So that was disappointing. So I’m glad we get to go this year.”

“I feel like we did a lot better this time like coordinating and talking to each other while playing rather than last time,” Karanam said. “It was definitely an improvement and it was a lot of fun to play.

“I’m excited cause there’s so many new people there (at states) and it’s going to be different from playing at our courts.”

Tahiri later found herself in a marathon 2 1/2-hour long match with Miller in the No. 1 singles finale. After Miller, who beat Tahiri in the conference final, rolled in the first set, Tahiri came back to win a tiebreaker in the second, forcing a third set. Miller eventually won the match, 6-1, 6-7 (5-7), 10-4.

Lecanto faced Land O’ Lakes in No. 3-5 singles finals. Junior Kashin Mathur had the easiest time of it at No. 5, defeating Sofia Gonzalez, 6-2, 6-4.

“It’s really nice, it’s a really good feeling,” Kompella said. “I think I did pretty good. There were definitely some strokes I have to work on before regionals but for the most part I think I did OK.

“I just kept going to her backhand with my forehand. But the one thing I was not doing so well was with my backhand. It wasn’t going in a lot.”

“I’m not sure (what led to the win), just a lot of determination and will to win,” Lachireddy said.

The Lecanto boys could also be heading to regionals, but it will take a couple more days to decide that. While Springstead took the team title with 13 wins, the Panthers tied for second with Mitchell at eight apiece.

That means the two teams must play a tiebreaking match, which takes place Thursday at 3:30 p.m. Lecanto, having had home-court advantage throughout the tournament, agreed to go down to Pasco County so the Mustangs would not have to make another long trip.

“It’s awesome,” Lecanto boys coach Tim Bowman said. “Our No. 4 guy went right through the tournament and won the No. 4 district champ. So that scored us three points. And our (No.) 5 boy Austin (Purinton) did the same thing, went through and won the district champ for the five seed. That’s six points we earned as a team.

“And then Tushar (Desaraju) earned us a point and Nicholas Blackstock earned us a point, which gave us eight. And now we’re tied with a Mitchell team for runner-up in the district. It’s fantastic.”

“I thought I was done. But then I somehow got through to the tiebreaker. It felt good,” Heinz said. “I liked to say I did it myself, but I got really lucky on some of those plays. I did work really hard in tennis, so I guess it paid off.”

“It feels really good, but now I’ve got to start focusing for next year,” Purinton said. “I could have definitely played better. I was definitely a little bit nervous. But I was happy with the way I played.

“It shows me how other people play and it shows me what I need to do as I move up each year, how I need to progress.”