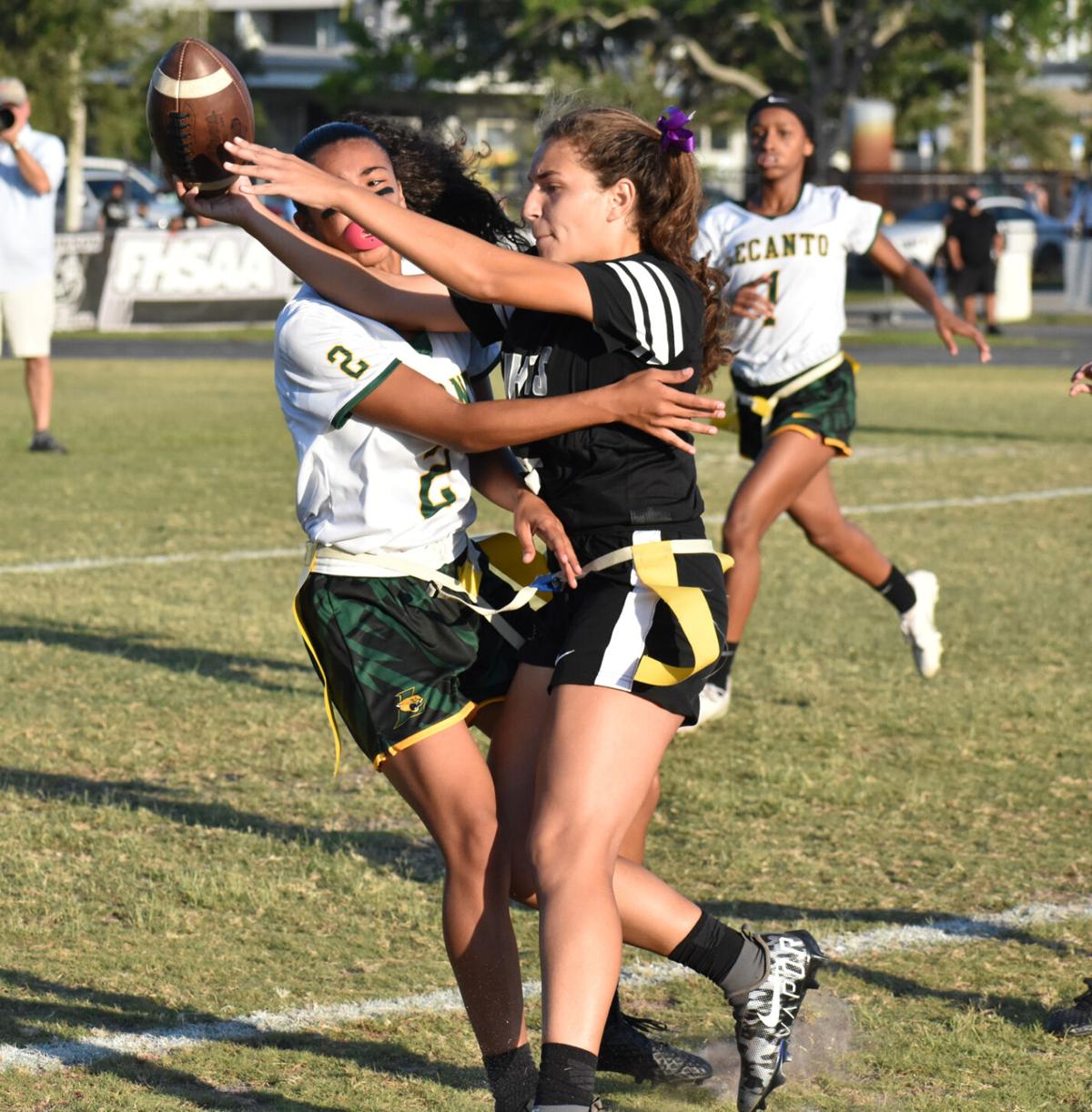 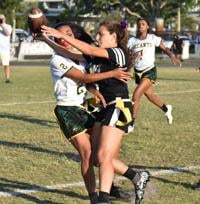 Lecanto defender Cynthia Homs, left, looks to make a stop as Robinson’s Bella Dolce makes a fingertip catch near the goal line Monday in the Region 1A-3 flag football championship game in Tampa. The Knights defeated the Panthers 34-0. 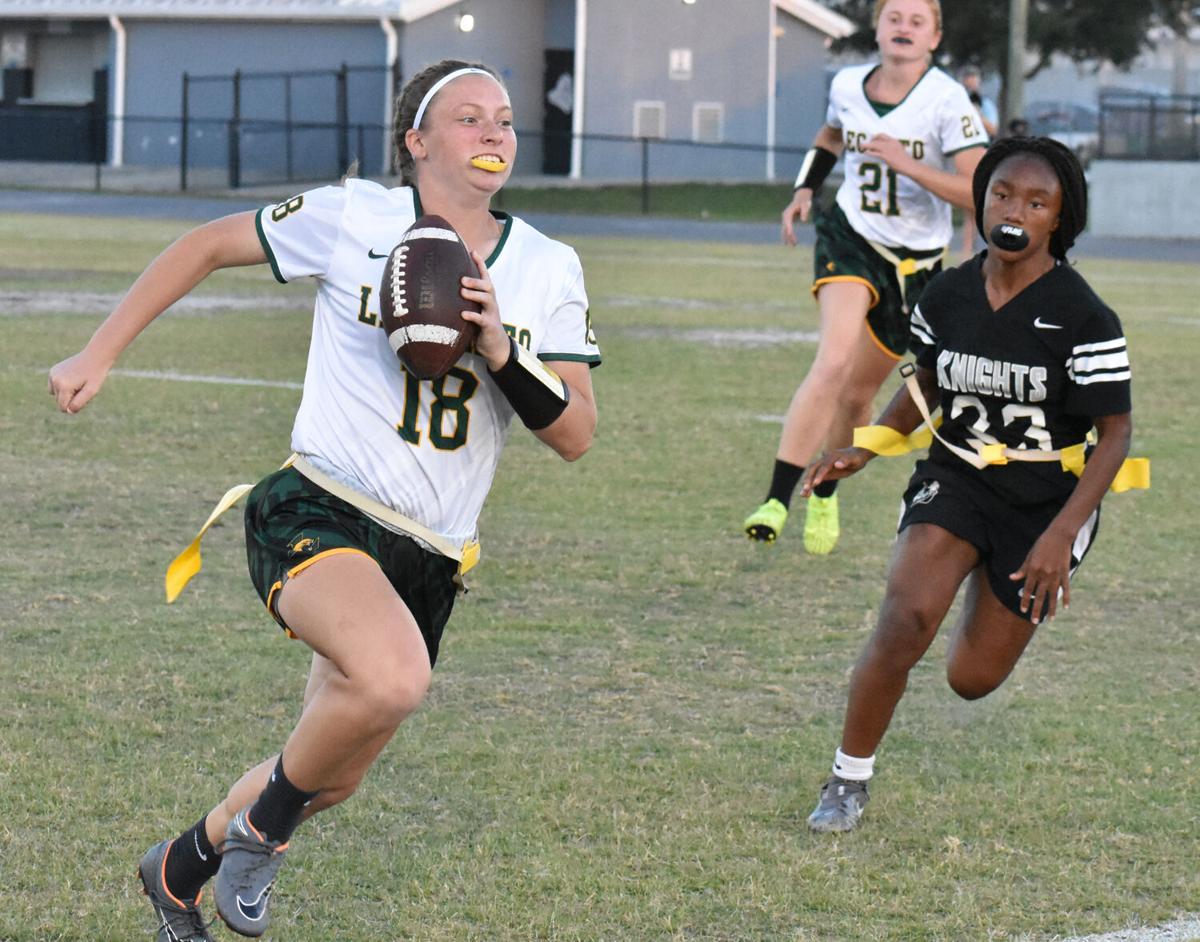 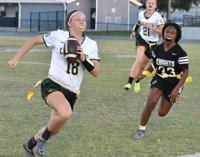 Trinity Keeran of Lecanto scrambles for a first down during the second half of Monday night’s flag football game in Tampa against Robinson.

Lecanto defender Cynthia Homs, left, looks to make a stop as Robinson’s Bella Dolce makes a fingertip catch near the goal line Monday in the Region 1A-3 flag football championship game in Tampa. The Knights defeated the Panthers 34-0.

Trinity Keeran of Lecanto scrambles for a first down during the second half of Monday night’s flag football game in Tampa against Robinson.

TAMPA — An incredible season and the careers of 10 Lecanto flag football seniors came to a close Monday night against the premier program in the state.

The third-ranked Panthers traveled to take on top-ranked Robinson in the Region 1A-3 championship game and the host Knights look like they will be tough to stop on their way to a fifth straight state title after a 34-0 victory over Lecanto.

Robinson has now won 48 games in a row after improving to 20-0 this spring and has outscored opponents 816-50. The Panthers’ campaign ended at 14-2.

“A very good run. It’s most wins in a season. End up the year 14-2 and in the Elite 8. I’m not sure it gets much better than that for our program nine years in. We’re where we should be,” Lecanto head coach Rick Keeran said. “Next time we just need to do things a little better execution-wise, but right now, we’re okay. Disappointed in the outcome, obviously, but I’m super proud of our girls.

“There’s 10 seniors who have done a lot for our program. I counted it up the other day. With all 10 seniors we have, there’s 34 years total playing in the program. We’re going in the right direction and we’ll see what happens.”

One of those seniors, Cynthia Homs, is proud of the program she and her teammates have helped build.

“From freshman year I’ve always loved playing. I just grew a bond with this team,” she said. “And senior year we did something together and made a name for ourselves. It was just great and it’s just sad that it’s over.

“It was an honor making it this far with this team.”

On Monday, the Panthers started the game with the ball but has to punt after three plays.

The Knights converted a fourth down early in their first drive, which was capped off by a Sydney Stout to Bella Dolce short touchdown pass. The one-point conversion made it a 7-0 game.

After another three-and-out by the Lecanto offense, Robinson was back in the end zone in just two plays, when Stout hit Dolce in stride down the sideline for a 22-yard touchdown pass.

After the conversion made it 14-0, Lecanto called timeout to regroup.

It seemed to help, as Jordan Martynowski passed to Trinity Keeran for a first down on the first play of the drive and the two hooked up for another long pass later in the drive. But the Knight defense stiffened and eventually forced another punt early in the second quarter.

Stout added two more touchdown passes in the second quarter — to go over 100 TD passes for the season — to make it a 27-0 game at halftime.

The two teams played in the preseason and the Panthers kept it close, but the offense couldn’t keep the defense off the field long enough on Monday.

“When we competed in preseason in Tampa, we held the ball and had drives and that helped,” coach Keeran said. “But when you punt the ball and give the ball back to that offense, you’re asking for trouble. And we did that early and quite often.

Stout’s fifth touchdown pass of the night in the third quarter made it 34-0.

The Lecanto offense drove deep into Robinson territory late in the game after Trinity Keeran passed 20 yards to Casie Tallman and later hit Homs for a 16-yard gain on fourth down to get inside the 20. But the drive — and the game — ended on an interception right at the two-minute warning, where the mercy rule was put into effect.

“We played them in the preseason and we knew from the start they would be difficult to beat. We came out and tried to execute, it just didn’t go as planned,” Homs said.