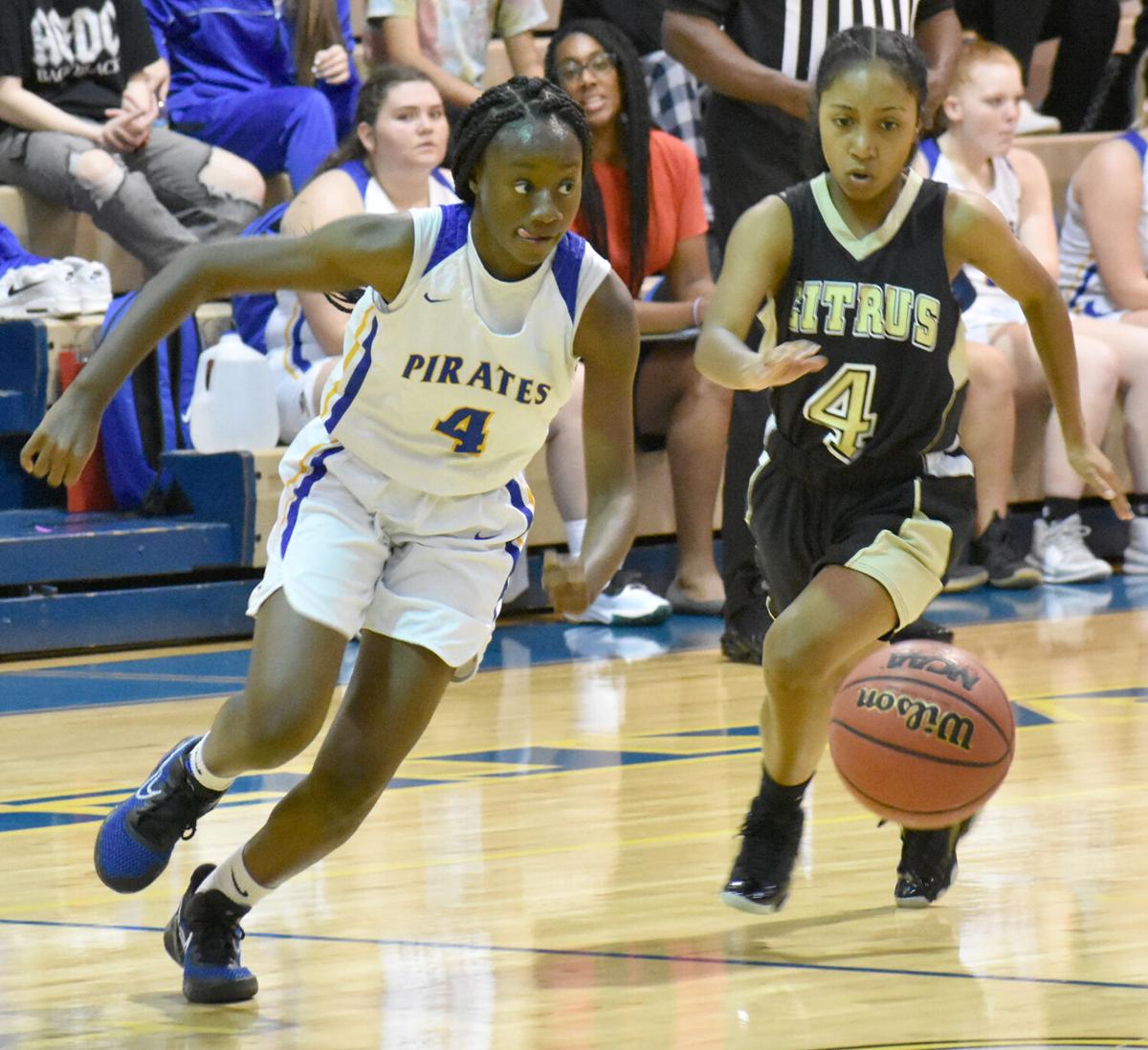 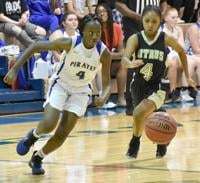 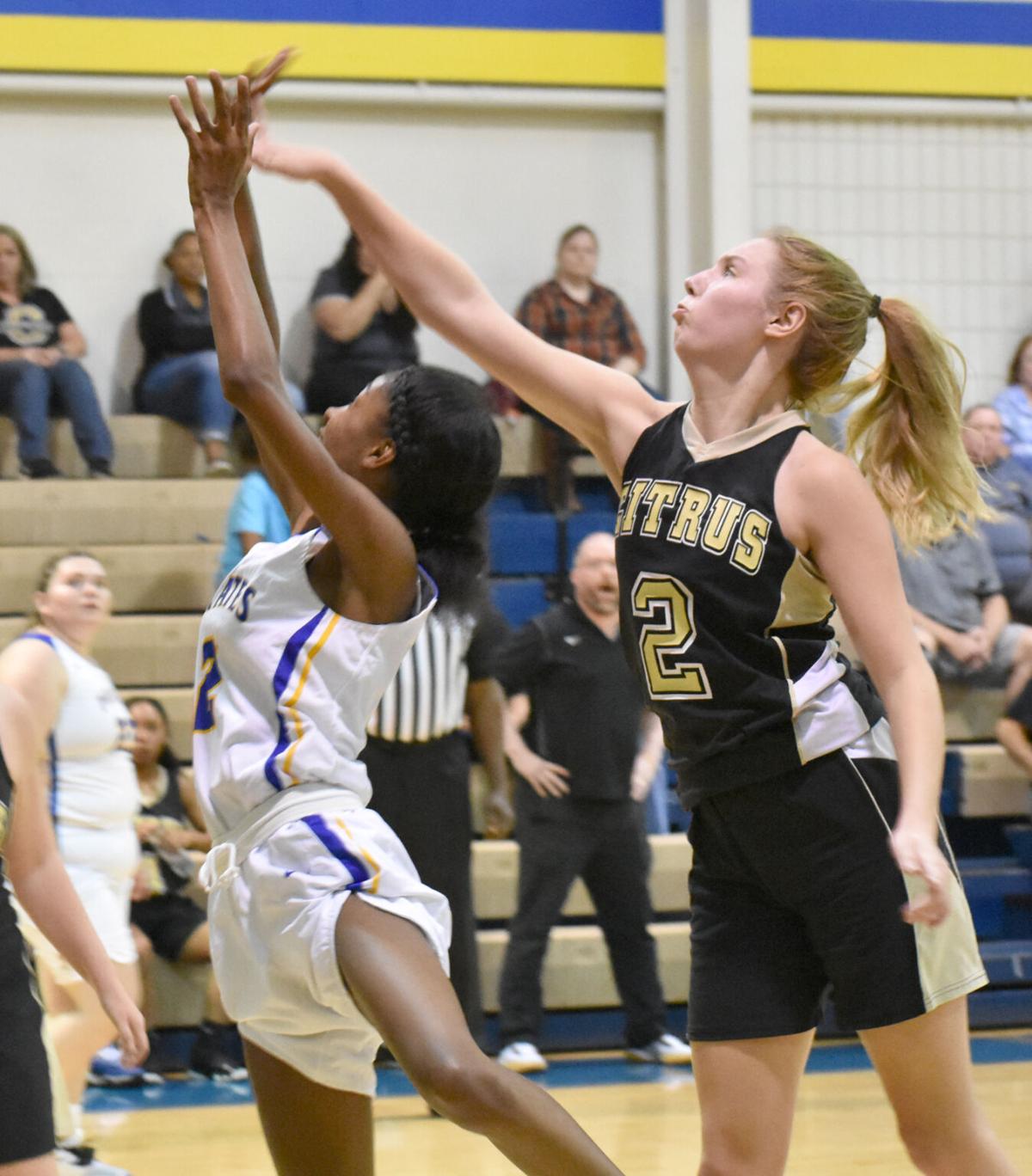 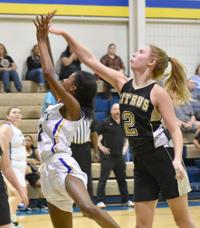 IG Edwards of Crystal River, left, drives to the basket and scores past Citrus defender Jillian Landgraf during Friday’s game in Crystal River. Edwards had 20 points for the Pirates, while Landgraf led all scorers with 33.

IG Edwards of Crystal River, left, drives to the basket and scores past Citrus defender Jillian Landgraf during Friday’s game in Crystal River. Edwards had 20 points for the Pirates, while Landgraf led all scorers with 33.

CRYSTAL RIVER — With several new faces on both teams, it was hard knowing what to expect when the Crystal River and Citrus girls basketball teams got together Friday night.

In an entertaining county battle between 0-1 teams, the new-look Pirates topped a much-improved Hurricanes squad, 66-49.

“We’re a young, inexperienced team. We don’t have a JV. We only have nine girls on the team. We’re going to get better every week,” first-year Citrus head coach Rich Archambault said.

Crystal River, which is replacing all five starters from last year’s Class 4A elite eight team, jumped out to an 18-9 first-quarter lead thanks to 12 points from IG Edwards and six from Jaylin DeVaughn — the only two returnees who saw varsity action last season.

Edwards finished the first half with 17 points and DeVaughn added 14, as the Pirates took a commanding 37-17 lead into the break.

He said Edwards and DeVaughn have stepped into their leadership roles well on a very inexperienced team.

“It’s night and day from last year to this year. They are in practice every day, motivating the other kids constantly. Talking to them on the bench. It’s like having an extra coach on the bench,” he said. “It’s good to see how much they’ve stepped up, not just on the court with their skill-set, but as leaders. It’s just going to make us better as a team.”

The Pirate lead grew to 26 early in the third quarter, but then Bryant pulled his starters and Citrus newcomer Jillian Landgraf took over the game.

She had nine points at halftime and added 14 in the third quarter alone — including a trio of 3-pointers — to help cut 10 points off the Crystal River lead at 52-36.

Two more baskets by Landgraf early in the fourth trimmed the lead to 12, but the Hurricanes would get no closer, as the Pirate bench players closed out the game on a 9-3 run.

“I’m proud of what they did. I was a little disappointed that first half. I went into the locker room and yelled more than I usually do,” Archambault said. “But they came out in the second half, made some adjustments and we were definitely much more competitive.”

Bryant said his younger players learned some valuable lessons with a lot of playing time in the second half.

The girl Bryant was talking about was Landgraf, who finished the night with 33 points, including seven 3-pointers.

“She’s very solid on the court and in the classroom. And she’s an unselfish ballplayer,” Archambault said.

DeVaughn led the Pirates with 21 points and Edwards added 20. Aidian Cordero had 10 points and Angelina Jenkins chipped in eight for Crystal River.

In addition to Landgraf’s 33 points, Ashtyn Morris added 12 and Mariah Cobb had four.

The Pirates (1-1) and Hurricanes (0-2) are both off until after the Thanksgiving break.