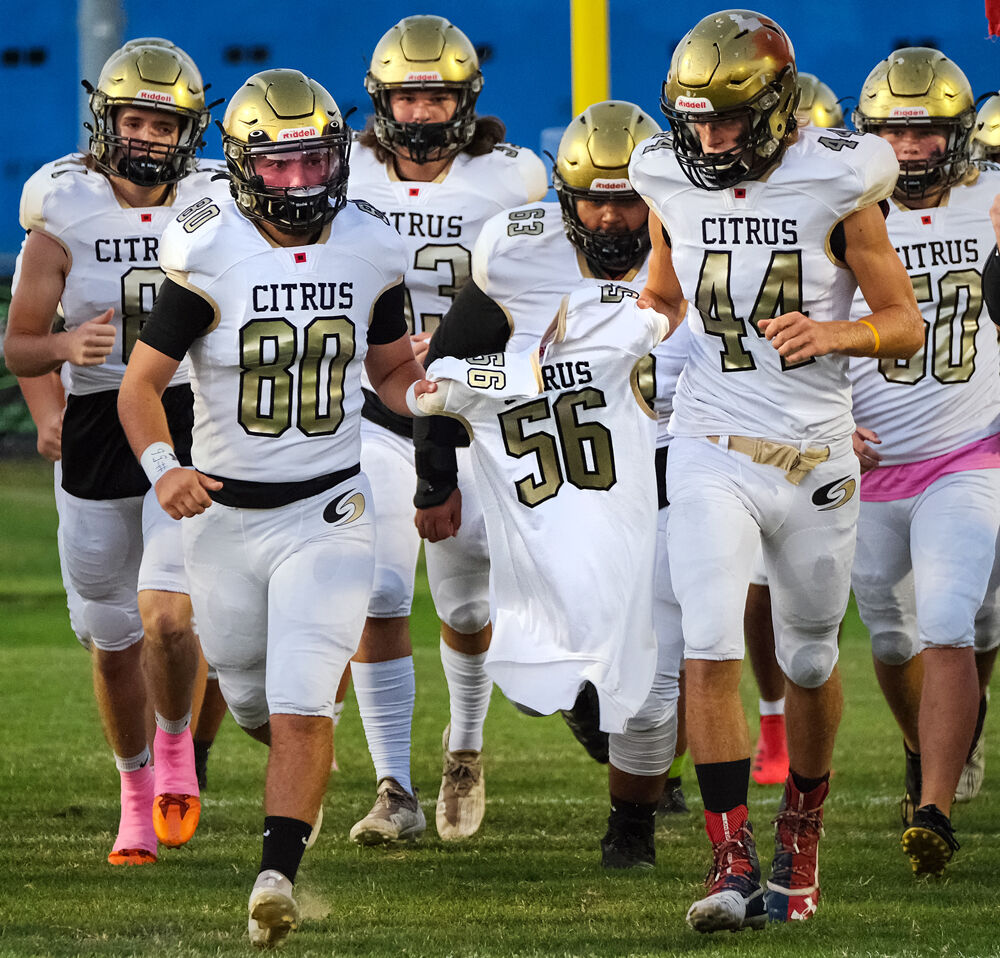 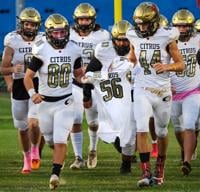 Shaun Jonaitis (80) and Caleb Holloway (44) hold the jersey of fallen player Antonio Hicks as the Citrus Hurricanes take the field in Crystal River on Friday night. Hicks, who passed away after collapsing during a football practice in September, was honored at the start of the game with a moment of silence. 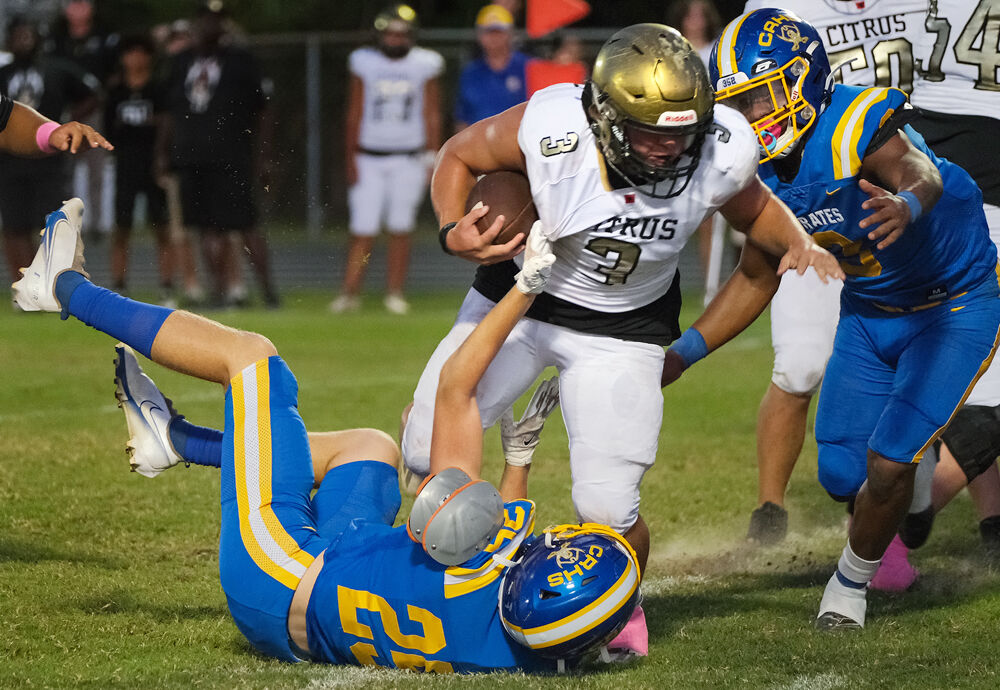 Shaun Jonaitis (80) and Caleb Holloway (44) hold the jersey of fallen player Antonio Hicks as the Citrus Hurricanes take the field in Crystal River on Friday night. Hicks, who passed away after collapsing during a football practice in September, was honored at the start of the game with a moment of silence.

CRYSTAL RIVER – As the ball fell to the ground, deflected off the hand of Colton McNeely, the Citrus High football team raced across the field in raucous celebration.

Friday night’s 18-16 overtime victory over host Crystal River didn’t result in a championship, a playoff berth or anything of that sort. But for the Hurricanes, it meant so much more.

A game that began with the team captains holding the No. 56 jersey of Antonio Hicks as they walked to midfield for the coin toss ended with a team photo where that same jersey was front and center. It was the team’s first action since Hicks died during a practice on Sept. 28.

“It’s been tough, but I think brotherhood’s the biggest part. We need brotherhood on this team, so that’s what we’ve got,” McNeely said. “It means a lot. We needed it.”

Citrus head coach McKinley Franklin turned and pointed to the sky as he talked about what made the difference for this squad.

“See that star right there? That’s the 12th man right there. That’s our guy,” Franklin said. “There’s no other star in the sky.”

The ’Canes (1-5, 1-1 District 5A-5) came in winless and having not played in three weeks, nevermind the emotional turmoil they had endured. Yet they were able to take advantage of some sloppy play by the Pirates (2-6, 1-2 5A-5) in a penalty-filled performance.

It was McNeely who blocked a punt on the game’s opening possession, with Ronald Hauter recovering to give the ’Canes the ball at the Crystal River 24-yard line.

That drive actually ended in a missed field goal, but the Pirates were flagged for a hold, a false start and chop block on consecutive plays to pin them back to the 3-yard line, and on the next snap Citrus swarmed the ball carrier for a safety.

“We got to get a lot better in terms of controlling what we can control,” Crystal River head coach Cliff Lohrey said. “Too many things that we could have controlled that we just didn’t do a good enough job of.”

Crystal River did piece together an 11-play, 69-yard drive in the second quarter capped by Zach Van Fleet’s 31-yard field goal, making it 3-2 with 4:53 left in the half.

A shanked punt gave the Pirates the ball back on the Citrus 30, and in three plays they scored on an 11-yard run by Joel Velazquez with 1:18 to play before halftime. That 10-2 advantage carried into the intermission.

Then came a second half in which McNeely and the ’Canes dominated time of possession. Citrus held the ball for nearly the entire third quarter on a 16-play opening drive of the second half, although a holding penalty and a couple fumbles led to a turnover on downs with 2:10 left in the quarter.

Despite getting down to the Citrus 32, more penalties pushed the Pirates back and they had to punt. However, the ’Canes turned the ball over on downs again to end an 11-play drive.

Jabin Black recovered a Crystal River fumble on the next play of the ensuing possession, and finally Citrus cashed in going 32 yards on seven plays, the last a 3-yard dive up the middle by McNeely. He also punched in the 2-point conversion to make it 10-10 with 4:23 remaining in the fourth quarter.

“They were blitzing the inside and then we started running the ball outside. Then when they started containing the outside we started pounding it,” said McNeely, who ran the ball 27 times for 152 yards.

Neither team could break the tie before the end of the fourth, necessitating overtime. Citrus went first starting from the 10-yard line and wasted no time as McNeely ran right up the middle and scored on the first play. He did the same thing on the 2-point conversion to make it 18-10.

Crystal River needed two plays to get down to the 1-yard line, but a 3-yard loss made it 4th-and-goal from the 4. Velazquez took a direct snap, ran to his left and found pay dirt to give the Pirates a chance to tie it.

That touchdown run, though, ended in chaos with the two teams pushing and shoving in the end zone, requiring coaches, officials and school administrators to rush on the field to separate the players.

After the officials held a lengthy conference, each team was hit with two offsetting personal foul penalties, setting up the game’s final play. Crystal River opted to pass and McNeely batted it down for the dramatic conclusion.

“Colton McNeely is an outstanding athlete,” Franklin said. “I had a feeling that if it had to come down to them going to his side, that we would stop it. I’m kind of surprised that Cliff threw the ball to that side. The kid, I’m going to say it, he’s probably the best running back in the county, probably one of the best linebackers in our district. He’s that good.”

“Not executed cause we didn’t score. So no, not executed the way we wanted to,” Lohrey said of that final 2-point try. “Our guys did the best they could. It didn’t go the way of the Pirates.”

For Citrus, it all seemed a cathartic moment in the wake of such tragedy.

“We played this one for 56. We’re going to honor him all season,” Franklin said. “We got our first win in honor of him.

“... Adversity is not what defines a team, it’s how you come through the adversity,” added Franklin, his voice cracking with emotion. “Two weeks ago, when we lost Antonio, I knew there’d be a decision that had to be made. The kids made that decision. They wanted to play football. They showed you that tonight.”