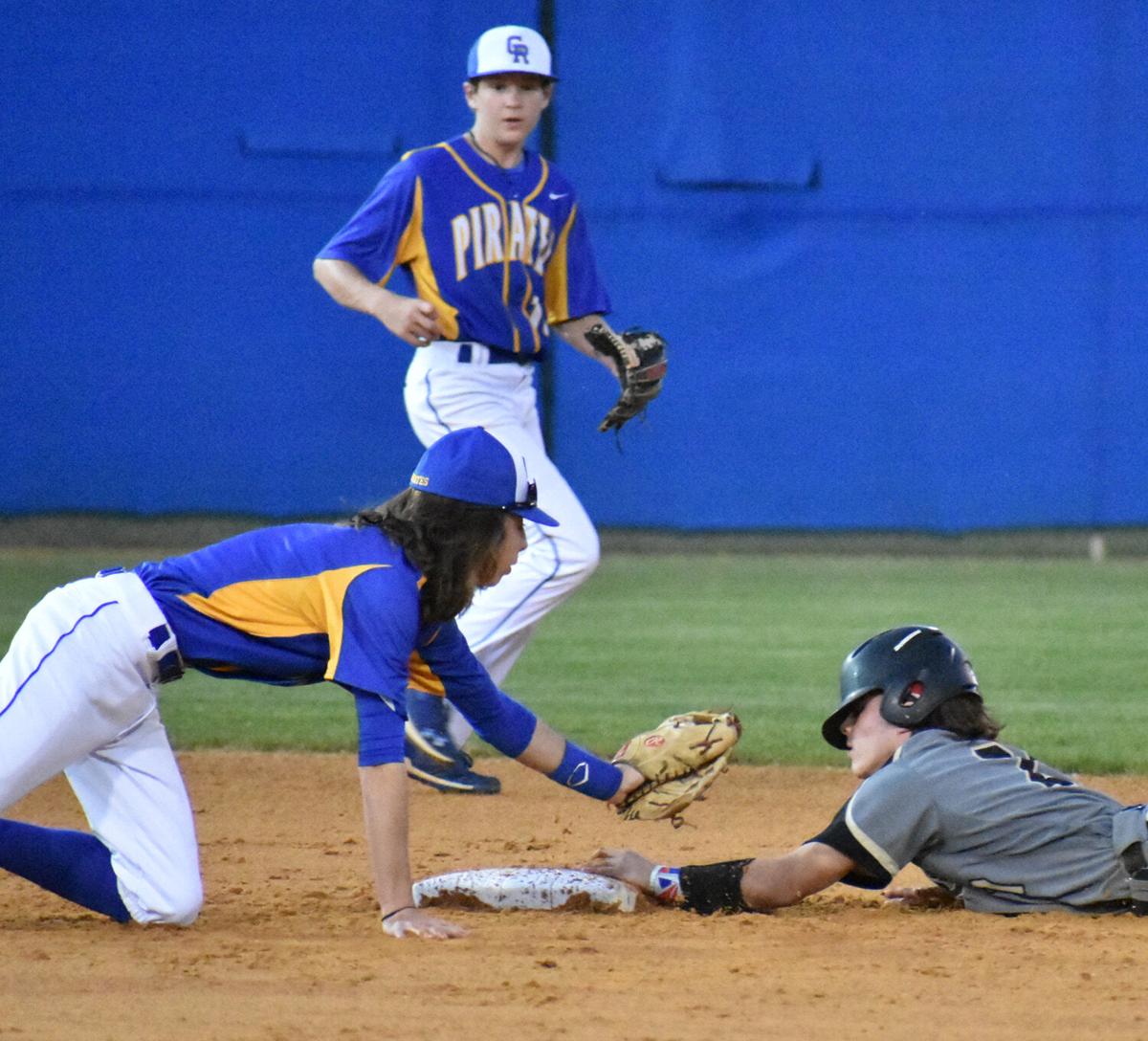 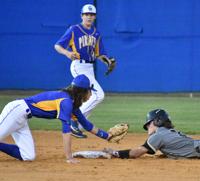 Cason Williamson of Citrus, right, slides in safely for a stolen base as Crystal River second baseman Dylan Hall applies the tag during the first inning Friday night at Crystal River High School. The Pirates won 5-2 to split the season series with the Hurricanes. 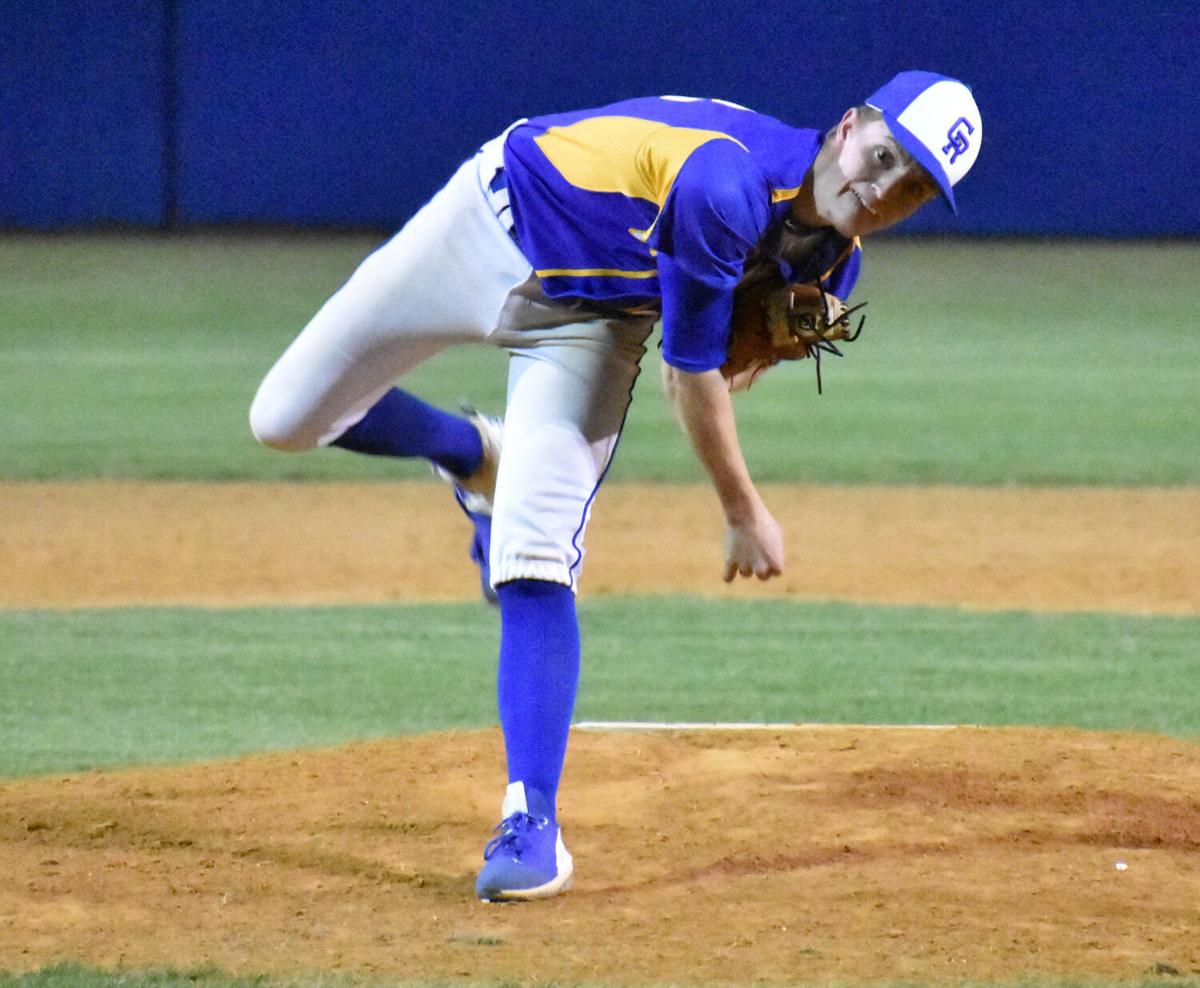 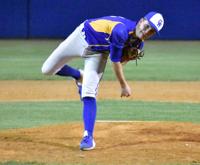 Cason Williamson of Citrus, right, slides in safely for a stolen base as Crystal River second baseman Dylan Hall applies the tag during the first inning Friday night at Crystal River High School. The Pirates won 5-2 to split the season series with the Hurricanes.

CRYSTAL RIVER — Down 2-0 and having already allowed eight men to reach base, Crystal River seemed in for yet another rough night in a week of forgettable performances.

But the Pirates showed resolve on their home field Friday night, held down visiting Citrus the rest of the way and rallied for a 5-2 victory.

It was a welcome turnaround for Crystal River (3-2) after losing 14-1 to the Hurricanes (2-3) on Tuesday night and 13-2 to Dunnellon on Thursday.

“We started off the year 2-0, we had good momentum, and then we kind of lost track of where we’re at, got a little complacent. We got beat pretty good,” Crystal River head coach James Metz said. “We finally kind of found our way back. We had a good practice and the boys are grinding. They’re working hard, that’s where it’s at.

Citrus appeared ready to pile on right out of the gate, when Cason Williamson and Jacob Palmeri were both hit by pitches around a single by Brycen Kersh, as the first three batters reached base in the top of the first inning.

But an attempted delayed double steal ended up with the man on third getting caught in a rundown, and the ’Canes stranded the other two.

Blake Clark singled leading off the top of the second, and eventually came around on a wild pitch that bounced several feet in front of the plate. Williamson followed by lining a RBI single into right field.

A walk to Kersh loaded the bases with one out, but Crystal River starter Jeff Jones fanned the next two to wiggle out of further trouble.

“It’s always deflating when you’ve got runners in scoring position and you don’t get those runs in,” Citrus head coach Jon Bolin said. “Early we felt like we had a chance, but they battled. I give them credit. They battled and their starter, he did well.”

Escaping jams was a reoccurring theme for the Pirate pitchers throughout the evening. The ’Canes put a man on in all but one inning and had a total of 17 base runners, yet left 11 of them on base.

“Knowing that you have pitchers behind you to back you up, close it out; there was pretty good energy in the dugout,” Jones said. “We picked it up and started smashing balls.

“We kind of just stepped back (with men on base) and looked at coaches and took a deep breath, and we set like Coach always taught us. So that’s how we reset.”

Riley Houle singled, Patrick Patella was hit by a pitch and Anthony Agate had a base hit to load the bases with none out in the bottom of the fourth. Crystal River pushed two runs across when Lane Stevens hit a grounder to shortstop, resulting in a force at second and then an errant relay throw to first.

In the fifth, J.J. Dourm reached on an error, Jones walked and Wyatt Pochis laid down a perfect bunt that the first baseman fielded and threw to third, far too late to get Dourm.

Houle lifted a sacrifice fly to right field and Patella followed with a bouncer to the second baseman, who tagged Houle but had no chance to throw out Patella at first.

Dylan Hall relieved Jones to start the sixth and got out of a two-out,

bases-loaded jam when shortstop Karson Nadal fielded a grounder and dove to tag second base. Stevens scored on a wild pitch for an insurance run in the bottom half, then Hall tossed a scoreless seventh to get the save.

“We threw strikes. We made the plays when we needed and that’s it,” Metz said. “If we throw strikes, we’ve got a good defense, we let them work, we’re good.”

“It’s an amazing feeling,” Jones said. “To know that we went on the road (at Citrus) and took an ‘L,’ a tough ‘L,’ and come back at home and defend our house is pretty strong.”

These first two weeks of the season have been the definition of up and down for the ’Canes, who have alternated losses and wins.

Tim Flippen struck out eight in 4 2/3 innings of work, giving up three hits, three walks and a hit batter. Citrus committed three fielding errors behind him.

“… We’ve got some soul searching to do, that’s for sure. And we had a good talk after the game. We realized to a man now that we’ve got to work harder.”