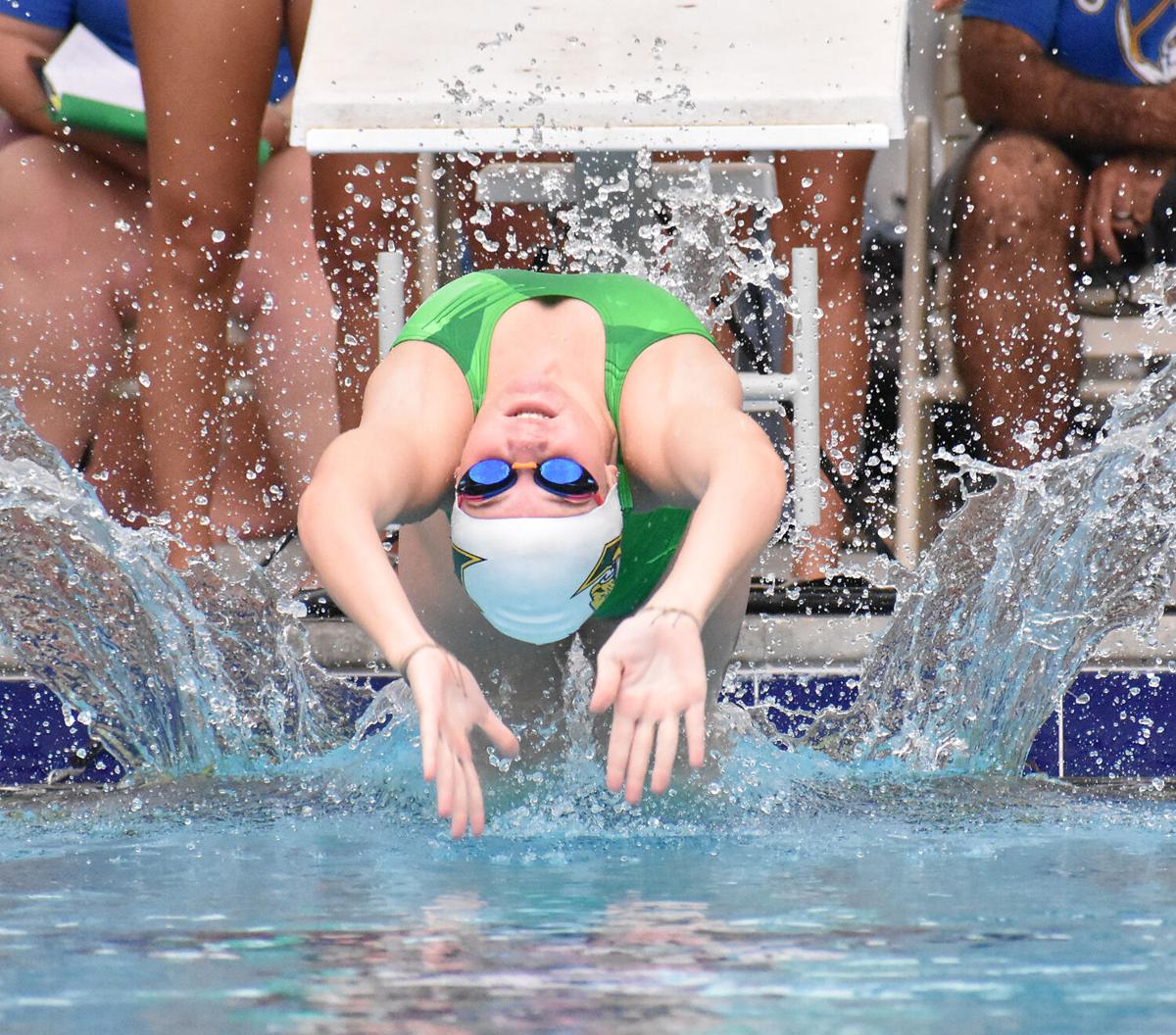 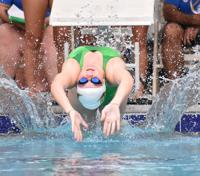 Grace Burkholder of Lecanto dives into the water to start the 200-medley relay Thursday against Crystal River at the Citrus Memorial Health Foundation YMCA in Lecanto. That was also the location of Saturday’s Gulf Coast 8 conference meet. The junior won GC8 titles in the 50 freestyle, 100 backstroke and 200-freestyle relay. 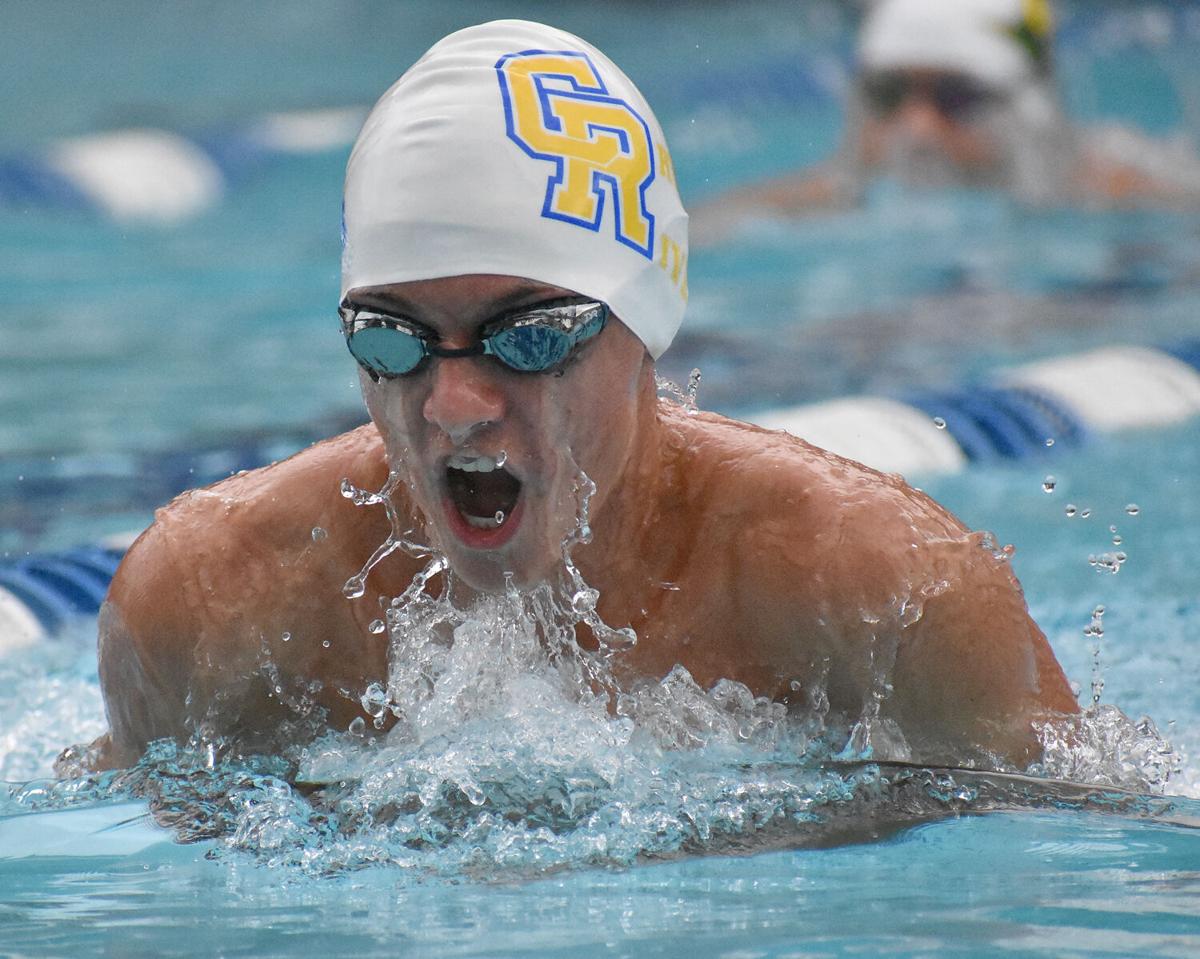 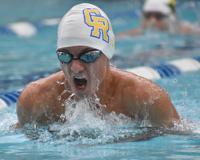 Kenneth Witkowich of Crystal River swims the breaststroke leg during the 200-medley relay Thursday in a meet against Lecanto at the Citrus Memorial Health Foundation YMCA.

Grace Burkholder of Lecanto dives into the water to start the 200-medley relay Thursday against Crystal River at the Citrus Memorial Health Foundation YMCA in Lecanto. That was also the location of Saturday’s Gulf Coast 8 conference meet. The junior won GC8 titles in the 50 freestyle, 100 backstroke and 200-freestyle relay.

Kenneth Witkowich of Crystal River swims the breaststroke leg during the 200-medley relay Thursday in a meet against Lecanto at the Citrus Memorial Health Foundation YMCA.

LECANTO — It took three years for the Gulf Coast 8 conference championship swim meet to occur, but for Crystal River it proved worth the wait.

Teams from seven GC8 schools (Central High didn’t field a team this year) converged on the Citrus Memorial Health Foundation YMCA on Saturday, but none could outperform the Pirates.

Scheduling conflicts prevented a conference meet from taking place the first two years of the GC8’s existence, so both the Crystal River boys and girls became the conference’s inaugural swimming champions.

"It’s fantastic. For the boys and the girls to just come together as a team, it’s exciting for them, and the first-ever one in the conference," Crystal River coach Chuck Gatton said. "Everybody stepped up for everybody else and it’s a great feeling for them. Good motivation."

The most drama came on the girls’ side, where the Pirates held just a six-point lead heading in the final event, the 400-yard freestyle relay.

Molly Maguire, Gabriella Witkowich, Olivia Szylkowski and Baylie Wells combined to take first place with a 4:18.82 clocking, allowing Crystal River to pull away in the team standings with a 123 compared to 109 by Springstead and 99 by Lecanto.

"… Some of my times, I did better than I did on Thursday (against Lecanto). But I could have done better."

She also got one in the 200-free relay, along with Haileigh Swisher, Blakely Messer and Lorilei Mohammadbhoy (1:57.69).

"I definitely think I can get better for the rest of the season, but so far I’m feeling OK," Burkholder said. "It’s really exciting actually. I was really excited for previous years but then it didn’t happen. This year is really exciting. I’m really proud of my teammates, too.

"… It’s showing me where I am, how fast I can go. But I don’t think this is the best I can get yet. But it’s definitely showing me placement-wise where I think I can go."

The Crystal River boys held a more comfortable advantage as the meet wound down, ending up at 134, well ahead of Lecanto in second at 92.

"I think my performance was pretty close to what I normally do. It was a little bit off since I had a meet two days ago," Hickman said. "I feel like I could have done a little bit better, but that’s why I train.

"We absolutely push each other every event," Hickman said. "I know I personally swim faster when I’m against people who are really close to my time, because we just want to get that little bit faster to beat each other. So it’s a lot of very friendly competition and it’s fantastic to have."

Hickman was part of the first-place 200-medley relay, along with Landon Vincent, Kenneth Witkowich and Dean Carey. The Pirates didn’t have any other first-place finishes, but rather showed off some depth in collecting the team trophy.

"Today was pretty mediocre, but that wasn’t what mattered today. It was to have a good time with the team and get ready for districts," Jenkins said. "They’re (times) definitely getting faster as I go through the season. Meets like this raise the competition, which makes me go faster. They should definitely be where I need them to be by districts."

At the start of the season Jenkins came down with COVID-19, forcing him to miss time, and admits it has impacted his progression.

"That was a big thorn in my side," Jenkins said. "I couldn’t do the whole first meet and I was out of the pool for like two weeks. COVID really drains you."