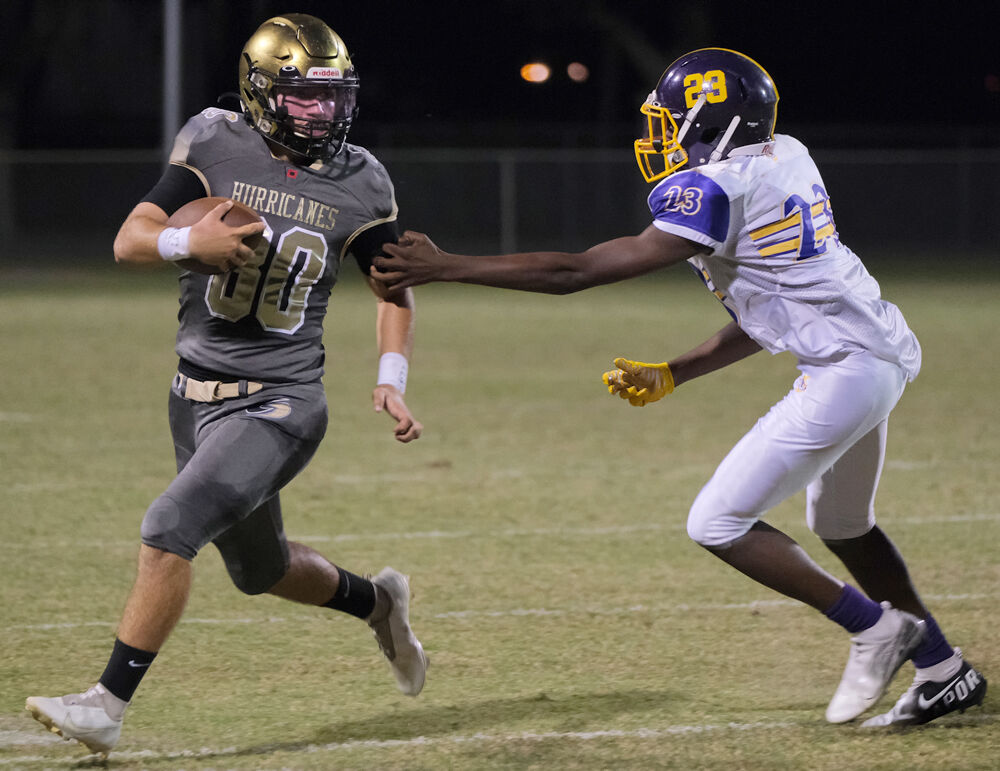 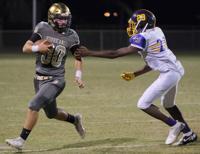 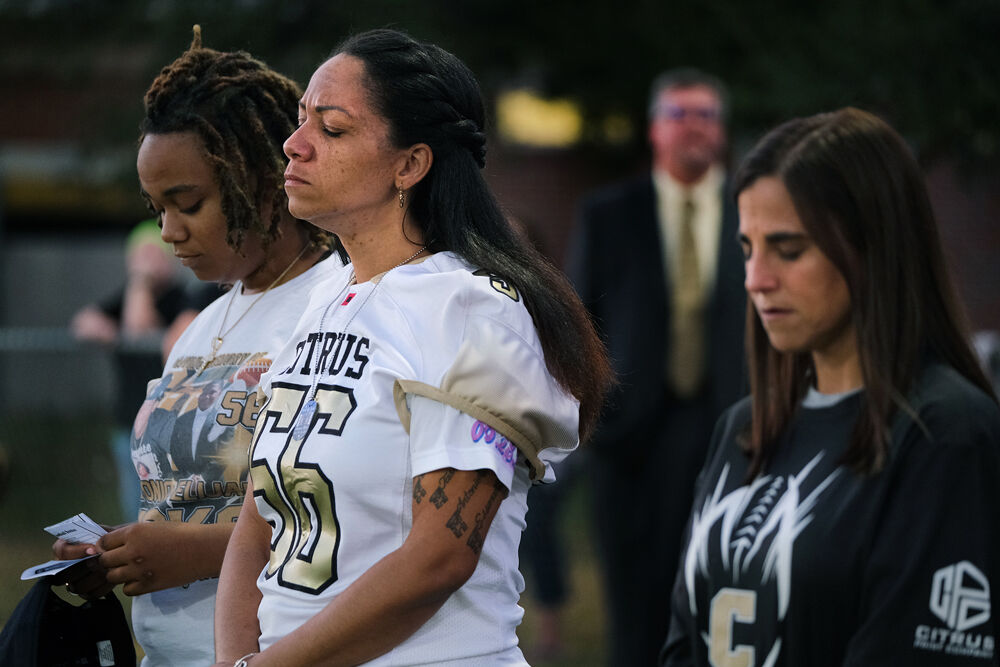 Lakesha Harrison, center, observes a monment of silence before the start of Friday night’s game in Inverness in honor of her son, Antonio Hicks, who died after collapsing during football practice in September. Also pictured is her daughter, Tashianna Hicks, left, and Deana Williamson, right, the mother of Citrus quaterback Cason Williamson. Williamson said their sons had grown up together.

Lakesha Harrison, center, observes a monment of silence before the start of Friday night’s game in Inverness in honor of her son, Antonio Hicks, who died after collapsing during football practice in September. Also pictured is her daughter, Tashianna Hicks, left, and Deana Williamson, right, the mother of Citrus quaterback Cason Williamson. Williamson said their sons had grown up together.

INVERNESS — In a battle of two teams using the name Hurricanes, one rolled through like a major storm; the other simply fizzled out.

The end result was host Citrus sending everyone off to the homecoming dance happy, as those Hurricanes enjoyed a blowout victory over District 5A-5 foe Lake Weir on Friday night, 42-0.

“It feels great. We get to go hang out with our friends after a big ‘W,’ 42-0, and that’s it,” senior running back/linebacker Nick Freier said. “Great game all around.

“… It was tough on us and everything when our teammate passed away. But we’re getting through it together as a team and the coaching staff is bringing us together, and we’re just huddling as a big family.”

It was Citrus’ first home game since 16-year-old sophomore Antonio Hicks died during a practice on Sept. 28. Hicks’ uniform number, 56, was painted adorned with angel wings at midfield inside of the normal giant letter C, as well the letters LLA standing for Long Live Antonio.

Hicks’ mother, Lakesha Harrison, joined the team captains for the opening coin toss and was presented with the coin.

Coming off an emotional overtime win at Crystal River a week earlier, the ’Canes (2-6, 2-1 5A-5) made it a two-game streak by making big plays on both sides of the ball.

Deonte Sesler opened the scoring with a 4-yard touchdown run with 59 seconds left in the first quarter, capping a drive that began with him breaking off a 27-yard scamper.

The ensuing possession for Lake Weir (1-6, 0-4 5A-5) ended with Devin Souhrada tipping a pass in the air for Freier to intercept, though a penalty on the return pinned Citrus at its own 1-yard line.

However, Colton McNeely took the first snap 68 yards into Lake Weir territory. Citrus eventually came away with a 26-yard field goal made by Clay Cooper as 6:59 remained in the half.

Aided in part by Lake Weir’s penchant for jumping offsides, Citrus continued to move the ball up and down the field. Freier had another pick that set up a 25-yard touchdown pass from Cason Williamson to Souhrada, making it 17-0 with 19 seconds left before the intermission.

“It might be one of the best games I’ve ever played,” said Freier, who also ran the ball eight times for 73 yards with a 1-yard touchdown in the fourth quarter.

Williamson and Souhrada also connected for a second time, this time for 20 yards in the third quarter. Those are the first two passing touchdowns of the season for these ’Canes.

“It felt awesome,” Souhrada said. “It was just the blocking up front giving the quarterback time to throw the ball.”

Then there was McNeely, the sophomore who has put together a breakout campaign. He ran the ball 21 times for 201 yards and twice found the end zone in the third quarter, from 1 and 5 yards respectively. It was the second time this season he has surpassed 200 yards and his third two-touchdown game.

“We wanted to run the ball more tonight. We knew that we could, knew that we could run the ball some and that’s what we did,” Citrus head coach McKinley Franklin said. “After a while it opened up our passing game a little bit and we were able to throw the ball some. Both sides of us running and passing were pretty balanced and it was good. Colton ran the ball pretty well, Cason did a good job commanding the offense and moving the kids down the field.

“And then defensively, Timmy Cantrell is a mastermind. He’s a young kid, he’s a sophomore. He probably leads the district in tackles right now for linebackers. He did a great job leading the team tonight. I’m very pleased with all of their efforts.”

Citrus now has some momentum to build upon, as it finishes the final two weeks up on the road in its final district game against first-place Dunnellon, then at home hosting winless Central.

“A win’s always good. The kids played great,” Franklin said. “I’m so pleased with the way they played tonight. They worked hard all week. It’s a big win for us.

“… They’re Hurricanes, man. And I’ll say this: 28 years I’ve been out of school and the same feeling that I have right now in my gut being a Hurricane is the same feeling I see inside each one of these young men as they continue to get past Sept. 28. These kids are phenomenal, they really are.”