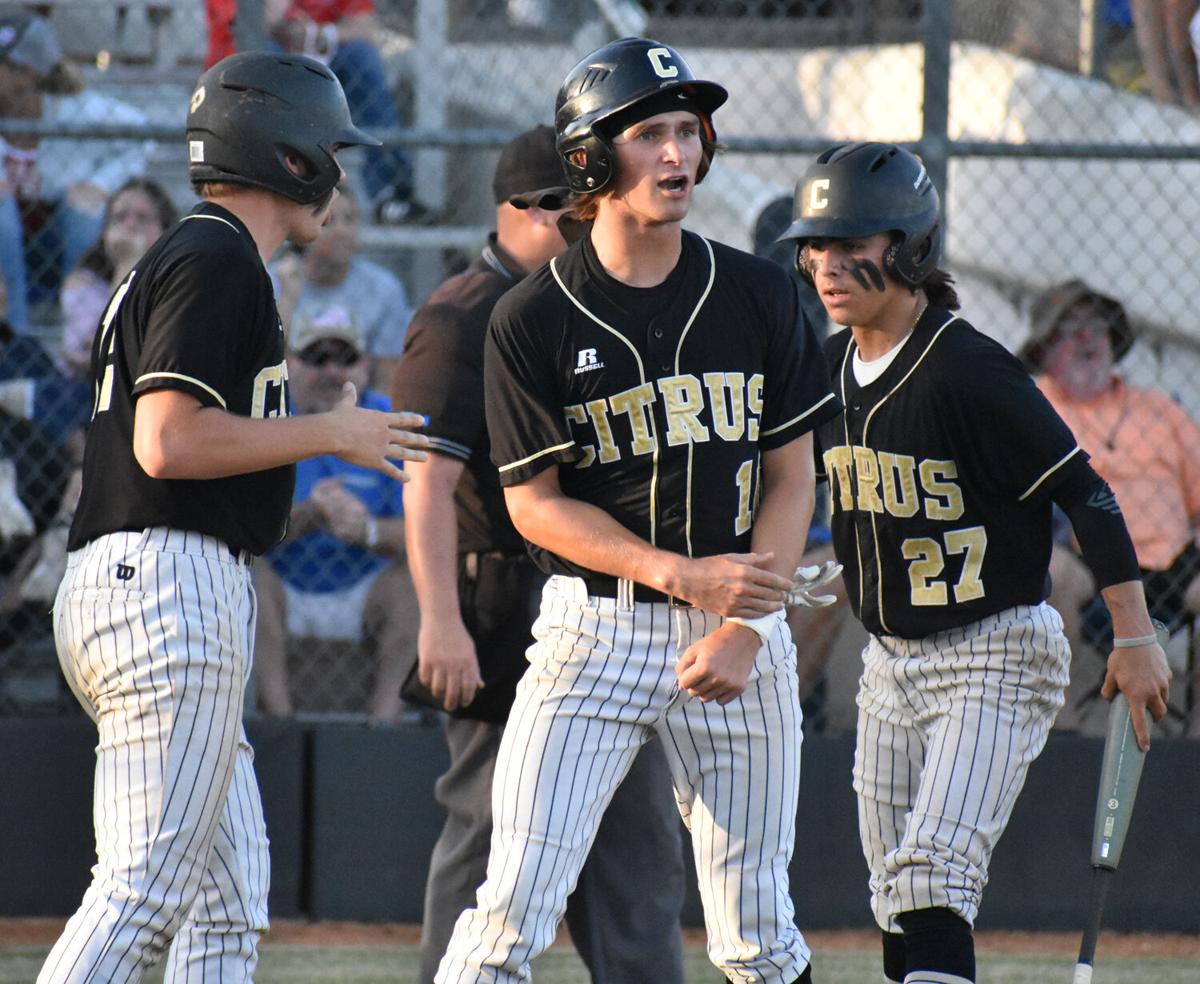 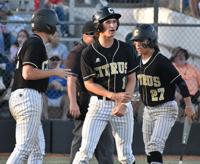 Brycen Kersh, center, and Cason Williamson, right, celebrate with Citrus teammate Blake Clark, left, on Friday after Kersh and Williamson scored on a single by Mikey McSharry during the first inning of the District 4A-5 baseball title game at home against Tavares. The Hurricanes won 10-3. 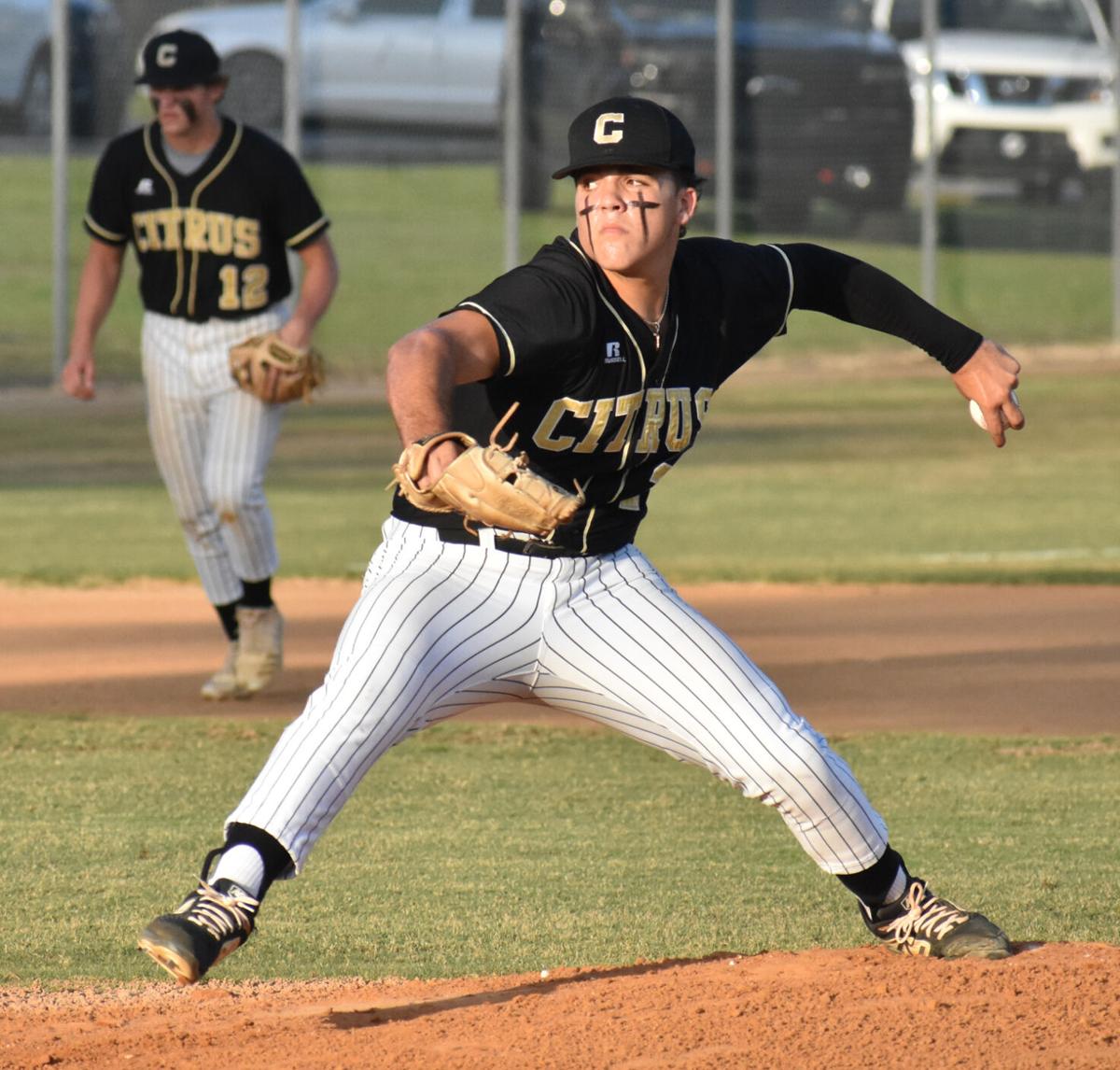 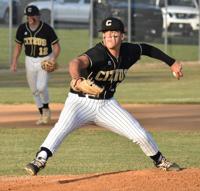 Cristofer Walley pitches during the first inning of Friday night’s District 4A-5 championship game against Tavares at Citrus High School in Inverness.

Brycen Kersh, center, and Cason Williamson, right, celebrate with Citrus teammate Blake Clark, left, on Friday after Kersh and Williamson scored on a single by Mikey McSharry during the first inning of the District 4A-5 baseball title game at home against Tavares. The Hurricanes won 10-3.

Cristofer Walley pitches during the first inning of Friday night’s District 4A-5 championship game against Tavares at Citrus High School in Inverness.

INVERNESS — Down 2-0 before its first at-bat, and 3-2 in the middle of the game, Citrus faced the possibility of missing out on its first district baseball title in six years.

The Hurricanes, though, had other ideas. They rallied back quickly from both of those deficits and broke the game open later, defeating visiting Tavares in the District 4A-5 championship game on Friday night, 10-3.

“We battled through injuries all year, sickness. Just trying to stay healthy and stay on the field was a task in itself. And to finish like this, kind of limping into this thing; that was awesome.”

The Hurricanes (16-9) last celebrated a district crown in 2015, a year that ended in the state semifinals. They haven’t posted a winning record since, but that’s changed in their second season since Bolin returned for his second stint as head coach.

“I just think it’s a special bunch of guys,” Bolin said. “They play hard, they practice hard. They love to play the game. It was a team that just never quits, never gave up. (Jacob) Palmeri goes down, our starting shortstop goes down and it was just like OK, we moved into survival mode. What we got to do next? Coaches didn’t even have to say anything, they just build upon themselves.

“They’re (Tavares) scrappy, they’re well-coached. But just perseverance. I never felt at one point during the game that we were going to be out, even when we got down early. Just ’cause of my history with this club, I know they’re not going to quit.”

The Bulldogs (11-15) were the third seed in the tournament, but had defeated the top-seeded ’Canes on April 8, 6-5. They got on the board with a couple of two-out hits in the top of the first, a single just inside third base for Greg Saines and a double off the fence in right-center field.

In the bottom half Citrus got those runs right back. Cason Williamson led off with an infield single to the shortstop and Brycen Kersh beat out a bunt in front of home plate.

With two away Mikey McSharry got them both home on a two-run single that dropped in front of the right fielder.

That allowed starter Cristofer Walley to settle in after the rocky start. The lefty gave up just one hit over the next four innings, a solo home run to dead center off the bat of Tyler McDonald.

“My adrenaline just pumped in. I just got to work,” Walley said. “I felt better. I felt more loose, more into the game. … That (tying the game) was hype. That helped me a lot.”

After McDonald’s homer in the top of the fourth, the ’Canes again responded. Dalton Denham singled and Nick Freier came in as a pinch runner. Bryce Pixley followed with a comebacker that ricocheted off the pitcher’s glove. Pixley beat the throw to first, and Freier continued running to third, drawing a wild throw from the first baseman, allowing Freier to get up and race home.

Pixley ended up on third by the end of that play and scored on a single to up the middle by Tyler Cameron. Tim Flippen later singled to left for another RBI, making it 5-3.

“Energy in the dugout, that really got us honestly,” Flippen said. “Just getting everybody up, that puts confidence in a hitter. That means a lot.”

“Timely hitting; we had runners on second and third every time,” Walley said. “We moved them over and got them in.”

Walley went five innings, giving up three runs on five hits, three walks and a hit batter. He struck out seven. Flippen relieved for the final two innings, pitching around a hit batter in the sixth and an error in the seventh, fanning two batters.

“Our pitchers have been the backbone of our team all year,” Bolin said. “Walley’s been terrific for us all year long. He might have been a little bit fatigued tonight, throwing 45 pitches two nights ago.”

Citrus sent 10 batters to the plate in a five-run sixth. Kersh and Flippen each had RBI singles, and a run apiece scored on a wild pitch, an error and a balk.

The game ended on a 4-6-3 double play in the top of the seventh, setting off a celebration in the middle of the diamond. The ’Canes will host Eustis next Thursday in a regional quarterfinal, starting at 7 p.m.

“It means a whole lot, a whole lot,” the senior Flippen said. “We’ve put in the work for the past four years. Just to finally get it means a lot to me.”