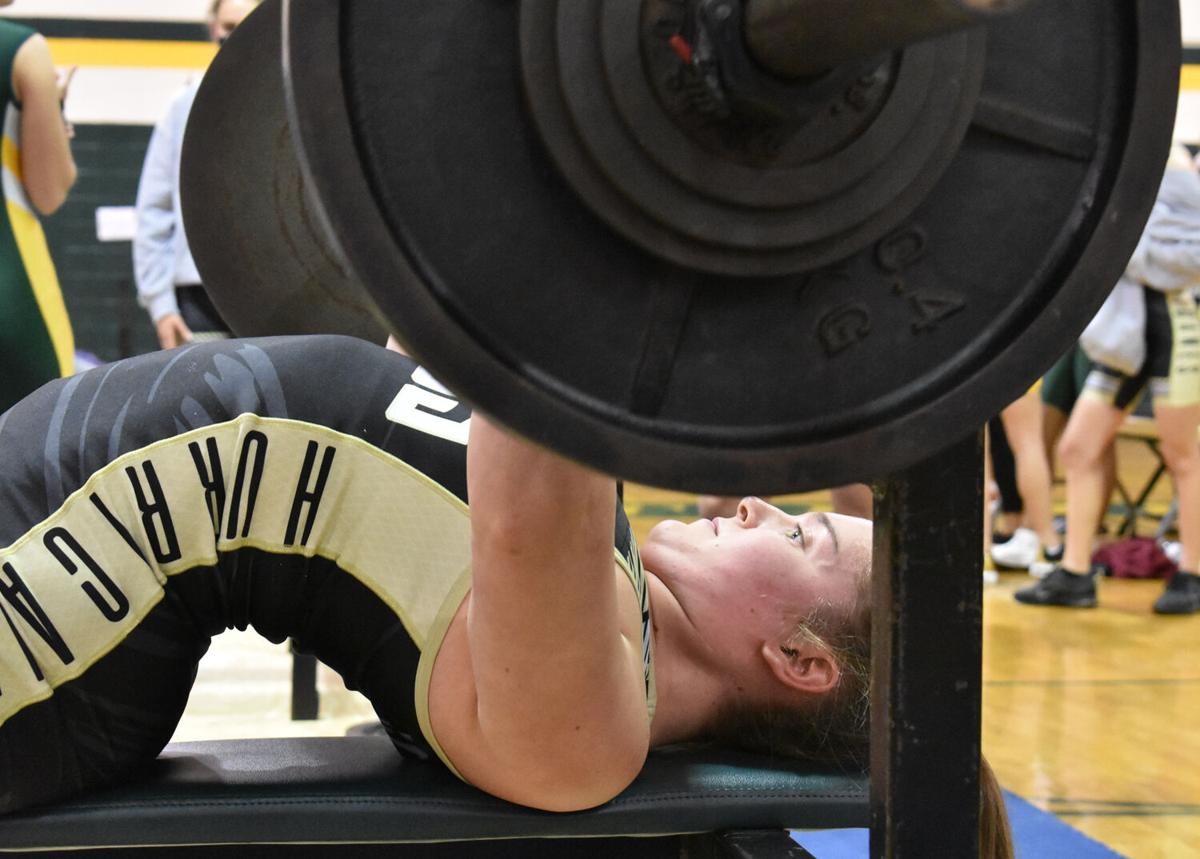 Kennedi Blevins of Citrus successfully bench presses 170 pounds on her way to the 139-pound division championship Wednesday at the District 2A-7 girls weightlifting meet at Lecanto High School. Blevins, a returning state champion, advances to regionals. 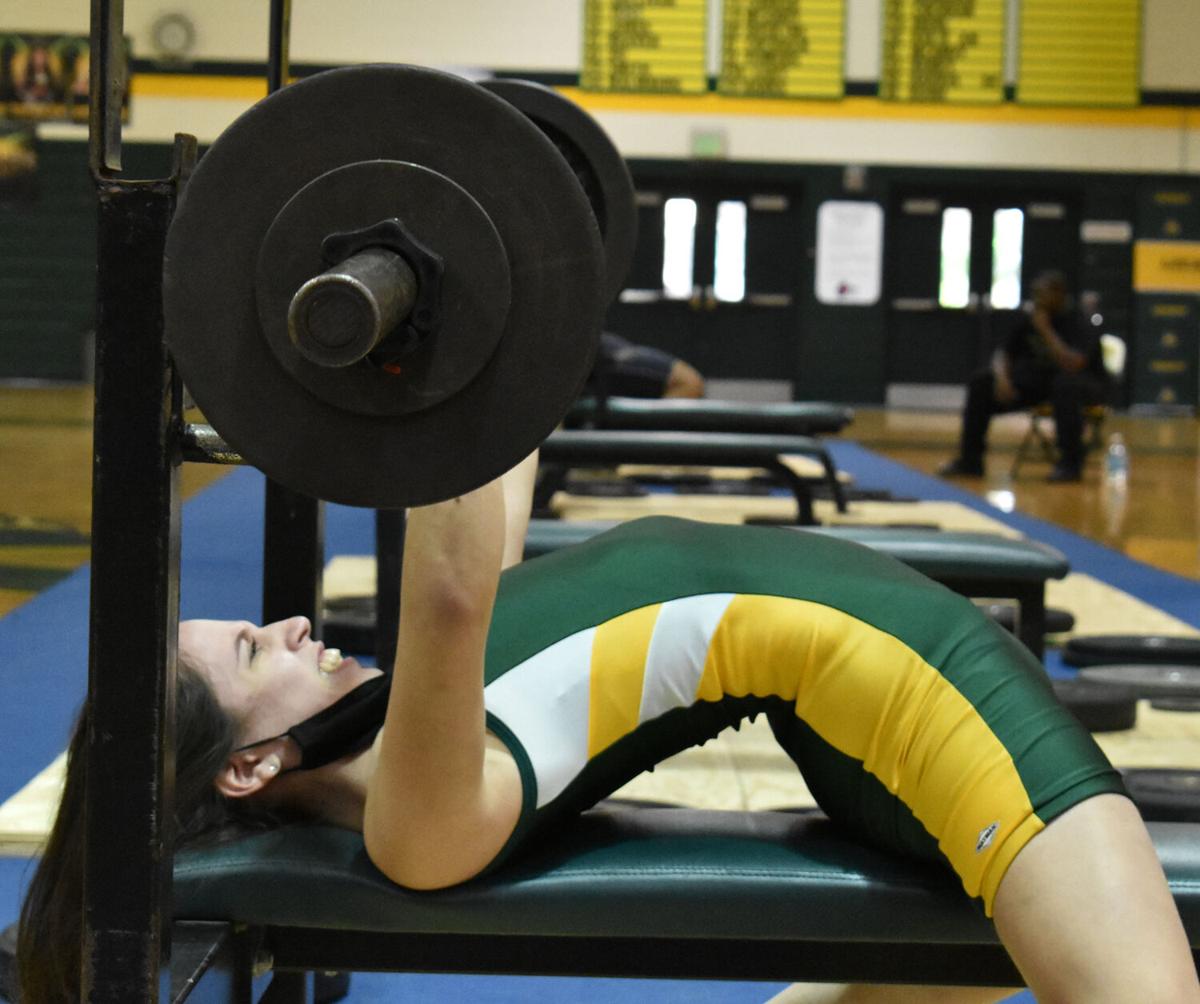 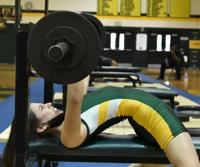 Lecanto’s Kimberly Flores grimaces as she bench presses 100 pounds Wednesday at the District 2A-7 girls weightlifting meet at Lecanto High School. Flores was second in the 110-pound division.

Kennedi Blevins of Citrus successfully bench presses 170 pounds on her way to the 139-pound division championship Wednesday at the District 2A-7 girls weightlifting meet at Lecanto High School. Blevins, a returning state champion, advances to regionals.

Lecanto’s Kimberly Flores grimaces as she bench presses 100 pounds Wednesday at the District 2A-7 girls weightlifting meet at Lecanto High School. Flores was second in the 110-pound division.

LECANTO — A year ago, the Citrus girls weightlifting team celebrated the first district title in the program’s history.

On Wednesday in the Lecanto gym, the Hurricanes doubled that championship total, finishing in first place in the District 2A-7 meet.

“I think it was definitely a team effort, from the coaching staff to every single one of those girls to go out there and give it their all. We told them at the beginning, ‘It’s going to take every single one of you for this to come to a reality,’ and they did. They gave it everything they got and thank God that it came our way.”

The ’Canes posted a team score of 60 and boasted three individual champions, in a meet where the top six in each weight class advance to the Region 2A-2 meet next Wednesday at St. Augustine.

No surprise that one of them was senior Kennedi Blevins, who won a state championship last year at 139 pounds. She came in having won back-to-back district crowns in that weight class, and made it a three-peat with a 185-pound bench press and 115 clean-and-jerk for a 300 total.

“I’m excited. I’m really proud of how the entire team did today. We all came out and did our best and that’s all we can do,” Blevins said. “It (her performance) could have been better, but I’m happy with it.”

Blevins was walking gingerly after the meet and sporting a knee brace, saying she was taking it easy while she nurses a minor injury.

“I’m not where I would want to be but only time will tell,” said Blevins, who was also a state runner-up in 2019. “Hopefully I’ll be ready by states.”

Junior Rebecca Tatun placed first at 154, another expected showing out of a two-time state qualifier who medaled at 139 a year ago. In this meet, she benched 155 and cleaned 185 for a 340 total that was the second-highest among all weight classes.

“It feels amazing. It’s a thrill that you only get once in a lifetime,” Tatun said of the team victory. “We’re in there every day practicing, pushing our hardest. We motivate each other like crazy.

“I got a new bench PR and I tied my old clean-and-jerk PR, which is a big achievement. I haven’t hit that in a long time.”

Lecanto also had a trio of district champs, with two-time state qualifier Alli Wilson earning her second straight at 129. The junior tallied 145 in both the bench and clean for a 290.

A surprise conference co-champion last week, Lecanto came in third in the team standings with a 50, just behind Vanguard at 53.

Boys weightlifting coach Wyndell “Chop” Alexander, who coached both boys and girls at Citrus prior to taking the head football job at Lecanto last year, was again filling in as he did at the previous week’s conference meet.

Greg Harper had been the head girls coach up until last week, when he stepped down after being hired as head football coach at Williston. His wife, Karen Harper, has taken over as Lecanto’s girls weightlifting coach but both Harpers have been stuck in quarantine.

“This is Greg Harper’s team,” Alexander said. “I thought the girls did a fantastic job. I had a few girls in my class, like Essence Cokely. I kind of worked with her on her technique a little bit. So a few of the girls I knew. But overall I thought they did a good job.”