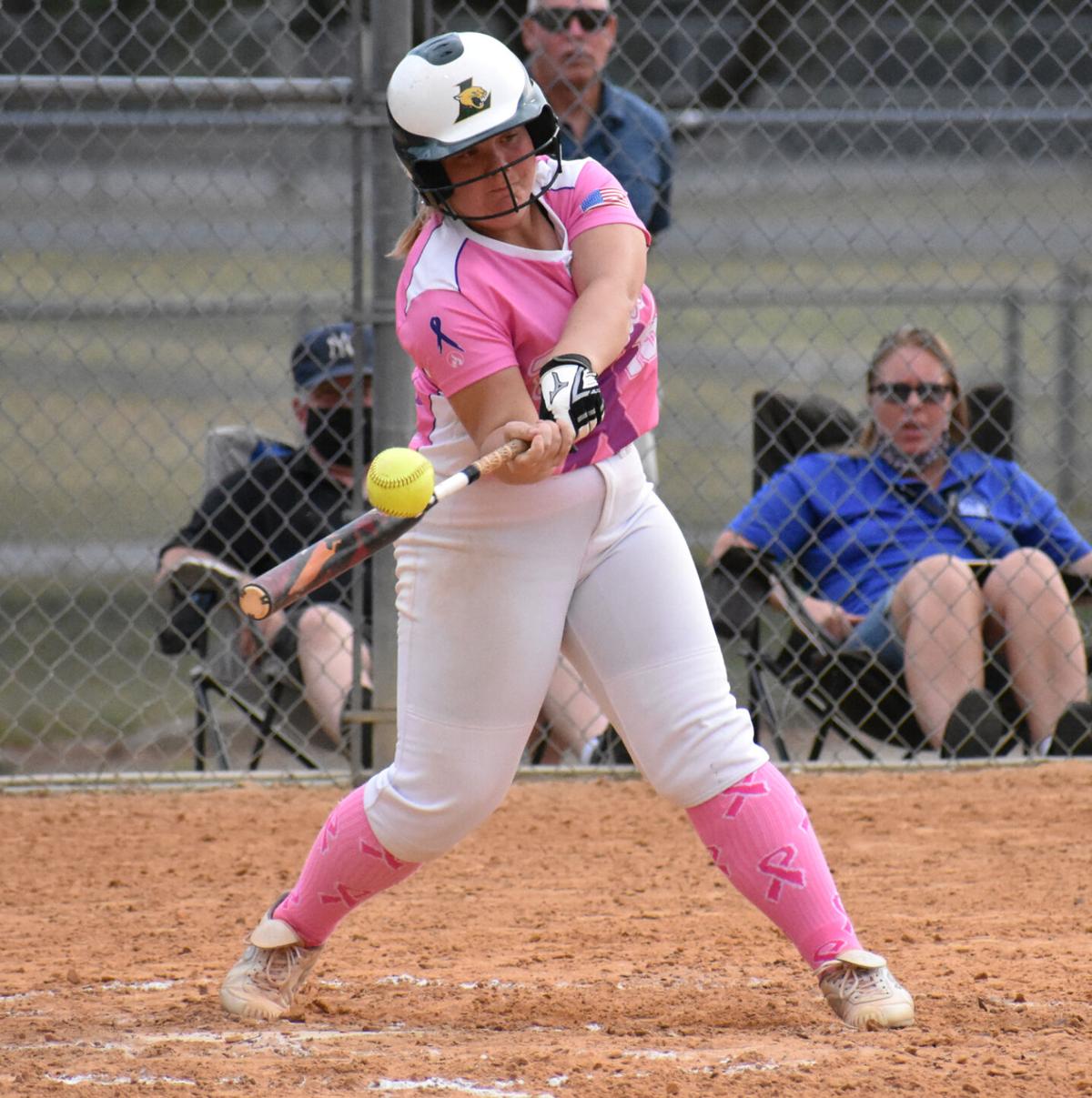 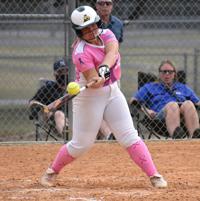 The Lecanto softball team scored three runs in the top of the first inning Friday night at Citrus High School, thanks in large part to a two-run double smacked by Melissa Plante. The Panthers defeated the Hurricanes 11-0. 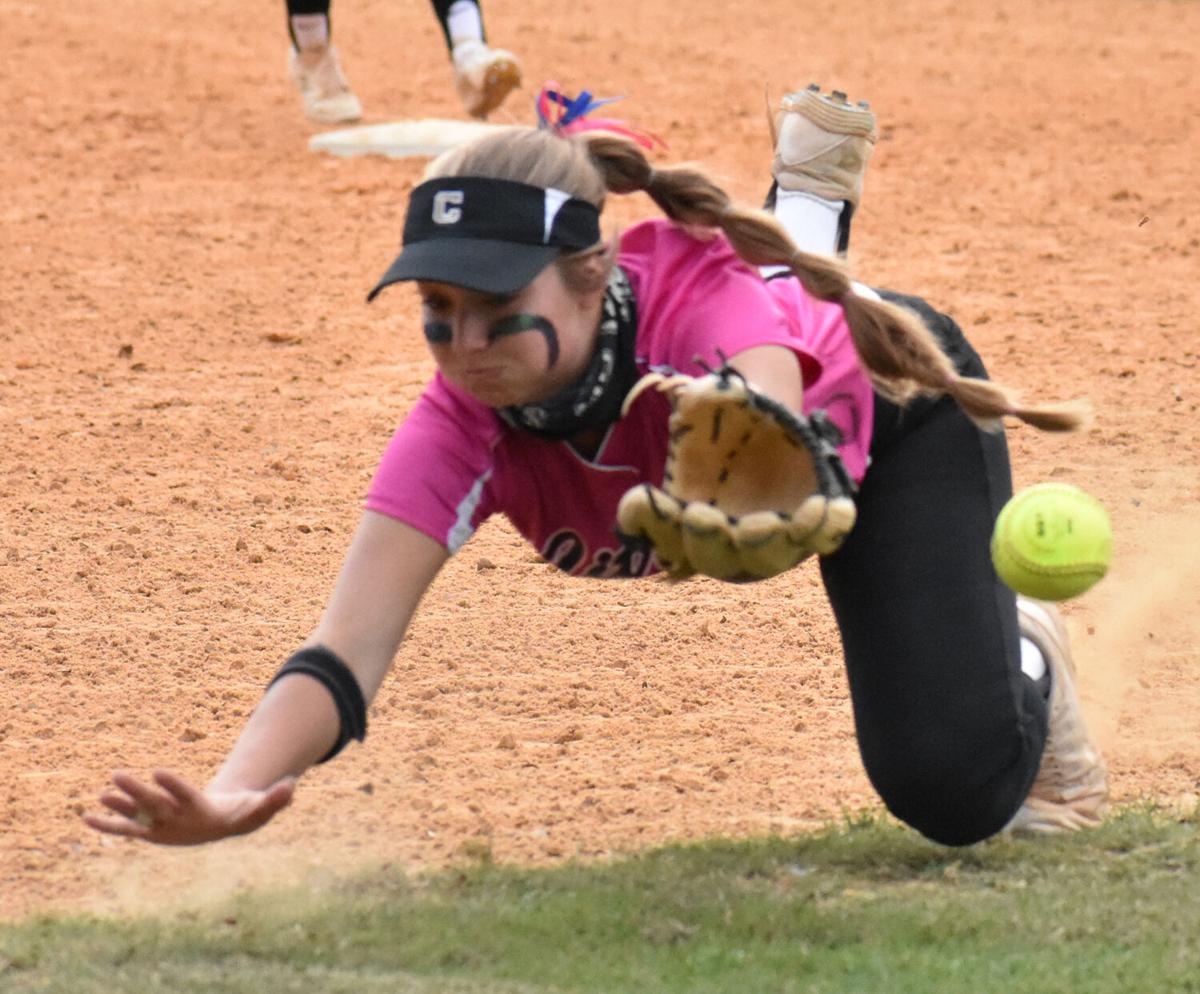 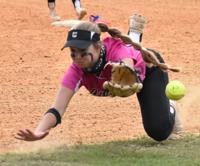 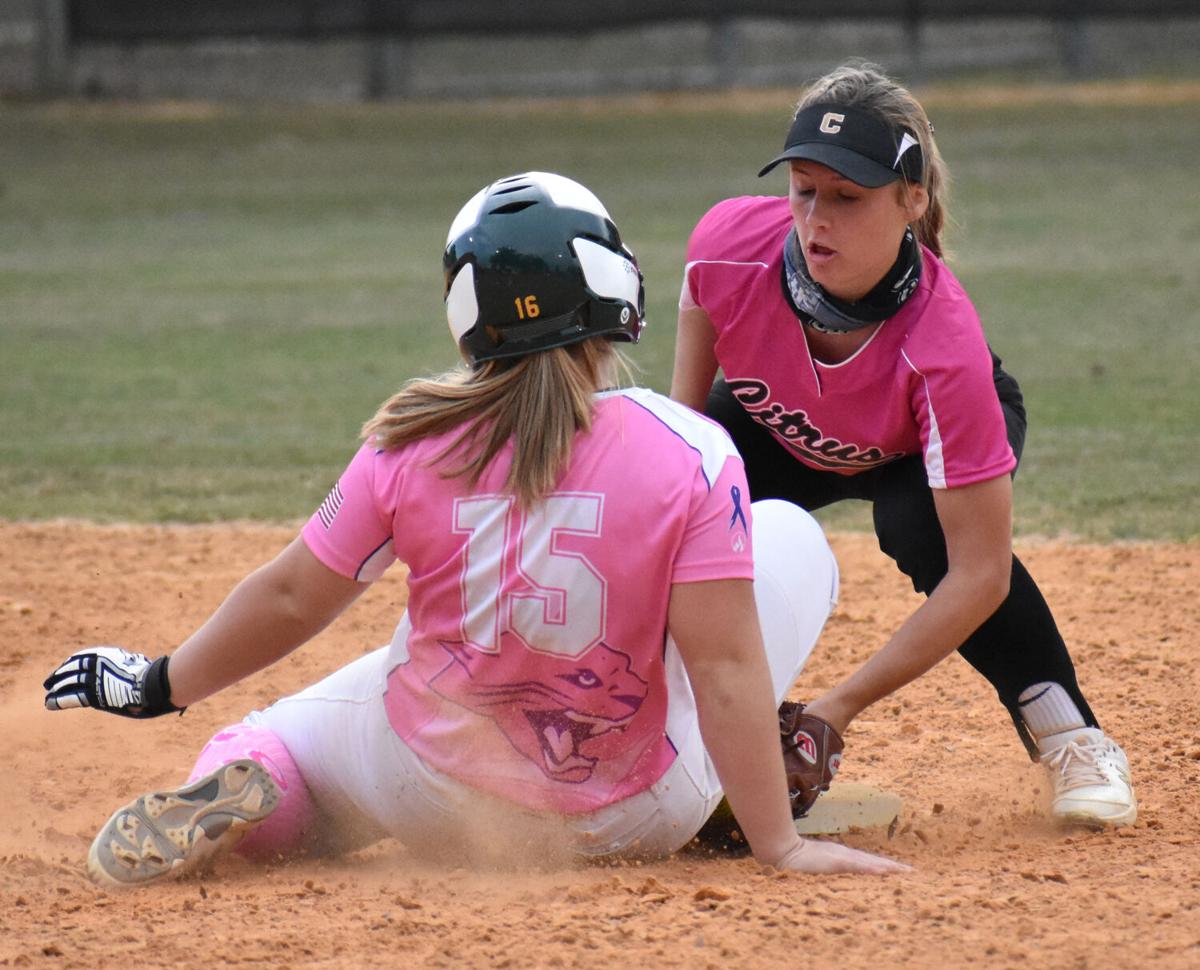 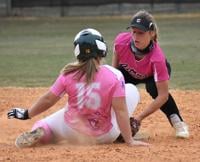 Melissa Plante of Lecanto is safe at second base just ahead of the tag by Citrus shortstop Molly Bender on Friday at Citrus High.

The Lecanto softball team scored three runs in the top of the first inning Friday night at Citrus High School, thanks in large part to a two-run double smacked by Melissa Plante. The Panthers defeated the Hurricanes 11-0.

Melissa Plante of Lecanto is safe at second base just ahead of the tag by Citrus shortstop Molly Bender on Friday at Citrus High.

INVERNESS — Both teams took the field clad in pink on Friday night, as Lecanto paid a visit to Citrus in a county softball matchup.

For many in attendance it was more personal than just a change of attire to help raise breast cancer awareness. The game was dedicated to the memory of Heather Bishop, a teacher at Floral City Elementary, a Citrus High alum and the sister-in-law of Citrus head coach Larry Bishop. She passed away in January at age 48 after a battle with breast cancer.

“It was an emotional night for us,” Larry Bishop said. “A lot of these kids went through Floral City Elementary where she was a teacher. So they knew her very well, as well.

“It means the world to me personally. It’s a small community, we’re a tight family. For our community to rally around the things that we’ve done this week for the (Heather Bishop Memorial Scholarship Fund) has been phenomenal.”

The Panthers cruised to an 11-0 victory in five innings, but Lecanto head coach Robert Dupler left no doubt about where he wanted the focus to lie.

“Nobody lost tonight,” Dupler said. “This game was to honor a very special lady and a pillar of our community. And that’s exactly what both teams did. They both came out here and they represented for Miss Heather.

In the game, the Panthers (12-4) scored three times in the first inning and five runs in the second to break it open early.

With two on and two out in the top of the first, Lecanto pitcher Kayla Bilbey gave herself some support by grounding a single up the middle to plate the game’s first run. The next batter, Melissa Plante, hit a pop-up between first and second that landed just out of the grasp of the second baseman and turned into a two-run double.

Then the Panthers batted around in the second. Elizabeth Bochert lined a RBI single to center, and once again Bilbey and Plante drove in runs. Bilbey laced a single to center that brought two across, setting up Plante for a two-run double into the gap in right-center that rolled up against the fence.

Bilbey added another single in the fourth to finish 3-for-3 with three RBI, and her courtesy runner Victoria Johnson scored all three times.

“A lot better than I’ve been,” Bilbey said. “I’ve just been struggling.”

The sophomore also performed well on the mound, scattering five hits, walking two and striking out four in her five innings. She pitched around two singles to start the bottom of the first and a bases-loaded, one-out jam in the fourth.

Emma Christiensen added a two-run home run in the third and Alyssa Farley singled in a run in the fourth. Christiensen and Kaleigh Nonnenmacher each had two hits, while Bochert and Farley both joined Bilbey in reaching base three times.

“I think our bats were on. I think that Kayla was settled down in the circle tonight. She pitched a fabulous game,” Dupler said. “And our defense played error-free. And with it being an emotional game, it’s tough on the team that’s playing in the emotional game, too, that’s home. I still take nothing from them. I think that they’re one of the best softball teams in the area.

“I look for them to go deeper into the playoffs than most teams will. I think they’ve got a shot of making a serious run in 4A. They’ve just got to keep battling together. Their bats were off tonight, it happens.”

Shyanne Waller had two hits for the ’Canes, who fell to 9-9 on the season. Molly Bender, Ashton Lewis and Paris Pollard had the other hits.

“We’re playing well. There’s certain spots, we’ve got some youngsters in key positions,” Coach Bishop said. “Not just the youngsters, but we made mistakes sometimes in key situations. But overall we were very pleased with the way we’ve been playing.

“Our pitchers, we’re getting from the circle what we want as far as placement of the ball. We get a low pitch, we get a groundball; high pitch, pop-up. We’ve just got to make those plays when we get those results.”

Fake news another example of the media not having a clew. The game had nothing to do with brest cancer a very terrible disease but thats beside the point. The game was to raise awareness of COLON CANCER which a awesome woman Heather Bishop passed away from in January. Just really upsetting that yall can't get the details correct. Proves local, national, world media is full of garbage and only push the narrative they think is best.

Why the pink uniforms?