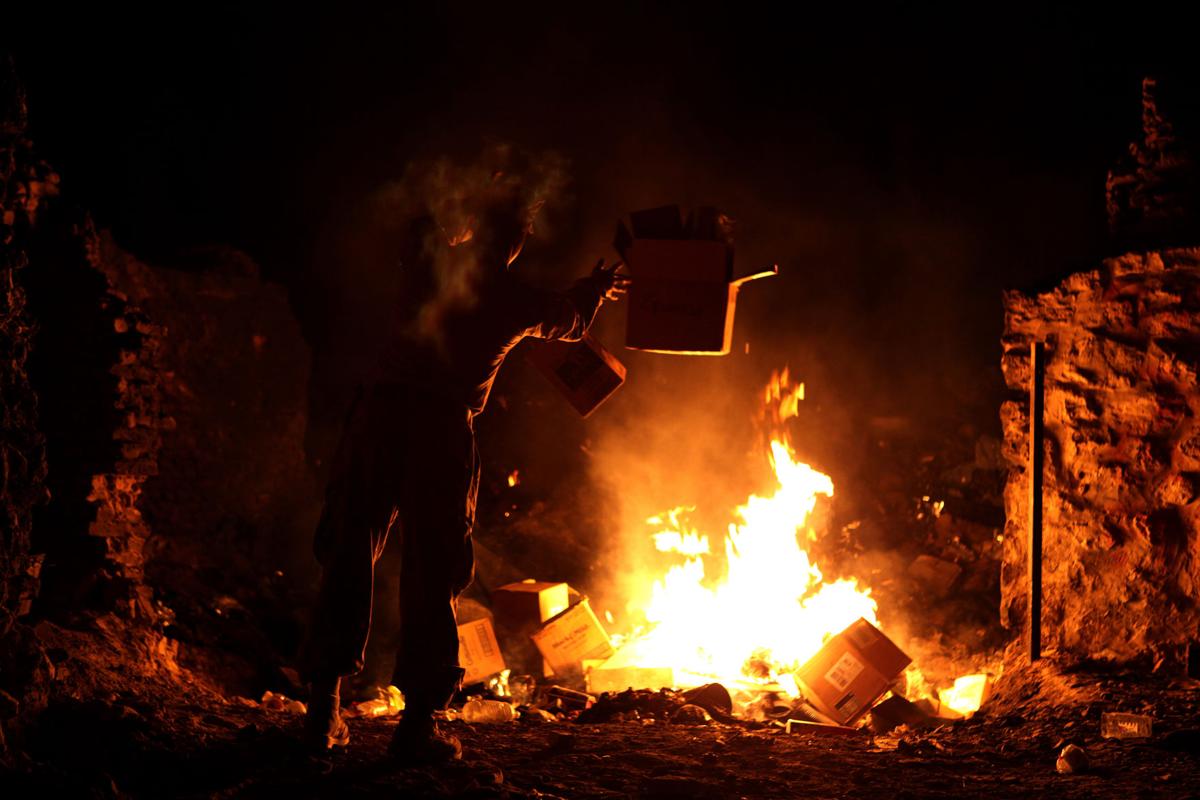 A U.S. Marine express services team member disposes of trash March 6, 2013, at the burn pit at Forward Operating Base Zeebrugge, Helmand province, Afghanistan. Military sites used open-air fires to destroy their trash at locations in Iraq and Afghanistan, causing smoke and fumes to be inhaled by military personnel in the area at the large pits run by U.S. military and civilian contractors.

In a recent Chronicle article, “The Poison of war,” I covered the impact of Agent Orange exposure to our veterans during the Vietnam War. It was tremendous to have so many people contact me about the information I provided on our suffering and America’s delays in responding to our illnesses and those of family members. Nearly all of whom spoke or wrote to me said they had no idea the impact of the poisoning to our military personnel and their families by Agent Orange.

During those conversations, I asked quite a few of them if they knew about the problems of burn pit exposures during Operation Iraqi Freedom and Operation Enduring Freedom impacting the health of veterans serving in Afghanistan and Iraq. Nearly every single person did not know about it, or knew very little. Therefore, I decided to write this article to inform everyone about burn pits and how they are impacting the health of today’s veterans.

What is a burn pit? Military sites used open-air fires to destroy their trash at locations in Iraq and Afghanistan, causing smoke and fumes to be inhaled by military personnel in the area at the large pits run by U.S. military and civilian contractors. Joint Base Balad, the largest U.S. base in Iraq and one of hundreds of U.S. bases in Afghanistan and Iraq where trash was burned in open pits for years, had a burn pit operation burning nearly 200 tons of waste per day. The base was churning out three times more garbage than Juneau, Alaska, which had a comparable population. JP4 jet fuel was a favorite trash igniter and it released clouds of benzene, a known carcinogen, while the smoke contamination consisted of plastics, batteries, appliances, medicine, and dead animals. Military personnel working at the burn pits reported the destruction of lithium ion batteries, plastic chemical drums, nylon, tires, wires, tarps, human waste, moldy bread, plastic bottles, radio batteries, amputated body parts, the blood and clothes of the wounded, and many more horrific contaminants. Air-sample tests found arsenic, benzene, formaldehyde, metals and sulfuric acid from the pit burning. One analysis conducted on dust samples from Camp Victory in Iraq found hazardous levels of copper, iron, and titanium particles. Other researchers detected dioxin, the cancer-causing chemical found in Agent Orange. Burning plastic bottles released dioxin and hydrochloric acid, and burning foam cups released dioxin, benzene, and other carcinogens. A veteran who lived adjacent to the burn pit at Afghanistan’s Kandahar Air Base said in The Verge, an online magazine, “I remember waking up with soot on me; you’d come out and barely see the sun because it was so dark from the smoke. It would just rain down on us. We always called it ‘black snow.’” That veteran is now confined to a wheelchair because of inoperable tumors in his knees, and breathes using an oxygen tank due to an obstructive lung disease.

Finally responding to pressure by veterans and various legal actions, the U.S. Department of Veterans Affairs (VA) in 2014 set up a burn-pit registry at www.publichealth.va.gov/exposures/burnpits/registry.asp for those affected and as of January 2020 there have been over 192,000 registered veterans. The Airborne Hazards and Open Burn Pit Registry is a free, voluntary, online questionnaire where veterans can document your exposures and report health issues. Those authorized to register are veterans of Operation Enduring Freedom/Operation Iraqi Freedom/Operation New Dawn, Djibouti Africa on or after Sept. 11, 2001, Operations Desert Shield or Desert Storm, and the Southwest Asia theater of operations on or after August 2, 1990. But response to claims by military personnel for their exposure illnesses in those areas have been, in many instances, ignored. What were their illnesses? The online magazine, The New Republic, reported their investigation found veterans who had served near burn pits began suffering from asthma, sinusitis, bronchitis, unexplained diarrhea, persistent runny nose or cough, severe headaches and abdominal pain, ulcers, weeping lesions on the extremities, and chronic infections. Many coughed up black mucus, which they called “plume crud,” “black goop,” or “Iraqi crud.” Some developed cancers—tumors grew on their lungs, brains, bone, and skin — including leukemia. Others suffered from severe respiratory conditions, including chronic obstructive pulmonary disease and constrictive bronchiolitis, a rare and often fatal lung disorder for which there is no treatment.

Those attempting to file claims with the VA run into many roadblocks. For example, Reserve Component service members should be able to seek care from the VA but they have had difficulty showing service connection because their medical records were never kept, were lost or destroyed. To further complicate the issue, National Guard and Reserve members have to prove they performed duty near burn pits, but their orders don’t provide exact location(s) of their duties for national security purposes.

There is a book by a military veteran, Joseph Hickman, “Burn Pits: The Poisoning of America’s Soldiers,” comparing the years and years of frustration of Vietnam War veterans exposure to Agent Orange to that of our veterans burn pit frustration in gaining recognition by the Veterans Administration and approving medical support for their exposure illnesses. Prime reason for failures being the costs for our government to do so. Of course, the VA denies delays are occurring but there has been nothing by slow movement in their system to take appropriate action. An attempt was taken by the military to install closed incinerators at the bases to prevent the release of poison into the air but as late as 2013 open burn pits still occurred and at one base their two closed incinerators were not even being used despite the $16 million spent to build them.

Currently, 38 U.S.C. Section 1710 allows for VA health care for veterans exposed to a toxic substance, radiation, or other conditions. However, this does not specifically address those veterans exposed to burn pits. The Disabled American Veterans (DAV) sponsored Veterans Burn Pits Exposure Recognition Act — introduced by Senators Joe Manchin, D-W.V., and Dan Sullivan, R-Alaska. It asks the VA to concede service members were exposed if they served in areas known to have burn pits from 1990 until the department has determined pits were no longer used in the area. Since the Nov. 21, 2019, bill introduction there has been limited action taken by legislators, and claims continue to be delayed. According to the DAV, since there is no current presumptive service connection and veterans must file claims for direct service connection for diseases and illnesses related to burn pit exposure. In order to establish a direct service connection for a related illness or disease, there must be medical evidence of a current disability; evidence of burn pit exposure; and evidence of a nexus between the burn pit exposure and the current disability. While we know, in general, where burn pits were used, it can be difficult to document each individual veteran’s exposure to a burn pit, especially during combat operations and in war zones. This becomes a significant barrier for veterans trying to prove their burn pit exposure to establish service connection. If a veteran is able to prove their exposure to burn pits, they still must obtain a medical opinion linking their disease or illness to the exposure. Obtaining a medical opinion can be difficult if medical professionals are not aware of the actual chemicals and toxins emitted from burn pits.

As you can see, it is a nightmare comparable to that found over the past four decades by Vietnam War veterans exposed to Agent Orange. This past week, alone, the VA finally released a new list of locations where veterans of my era may have been exposed to Agent Orange. Hopefully, our current veterans will not have to wait 45 years as we did before America recognizes their locations of exposure, associated illnesses, provides treatment, and accepts veterans claims of disability.

If you are a veteran who served near the burn pits, I highly encourage you to register on the VA website and write a personal letter to the sponsoring legislators of the Veterans Burn Pits Exposure Recognition Act. Do everything possible to get copies of orders, letters, etc., verifying your service near the burn pits. You may be healthy today, but tomorrow may bring horrific diseases from your burn pit exposure. Only by pressure from you and the public will action be taken by VA to ensure you receive just cause for your service and related illnesses.

John Stewart is a retired Air Force chief master sergeant, disabled Vietnam War veteran and has been a veterans advocate for nearly three decades. In 2016 he was inducted into the Florida Veterans Hall of Fame for his volunteer service. You can learn more about him at www.veteransgrapevine.com.

What activities have you spent the most time on while sheltering in place?