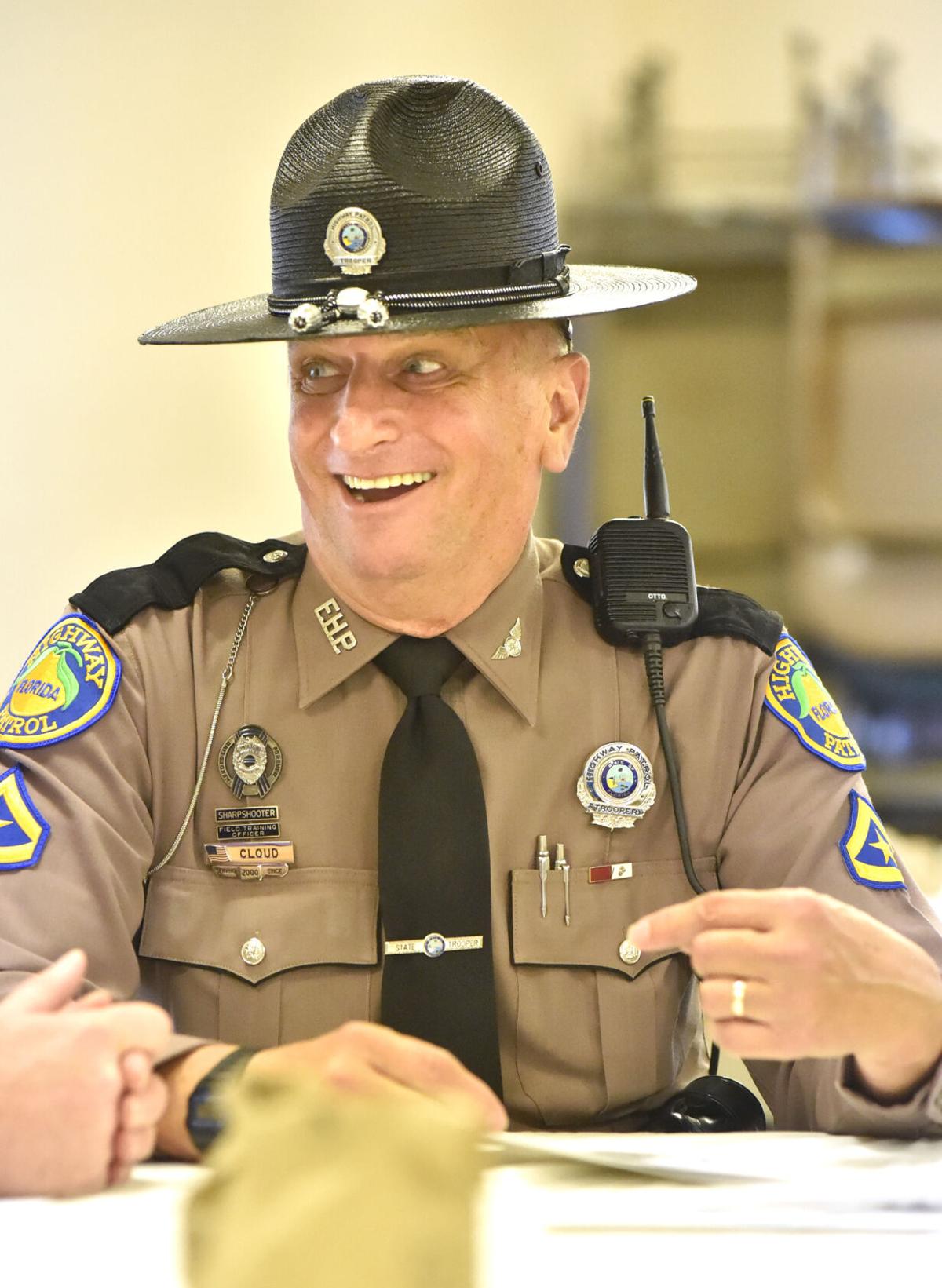 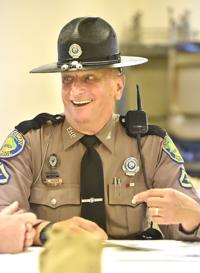 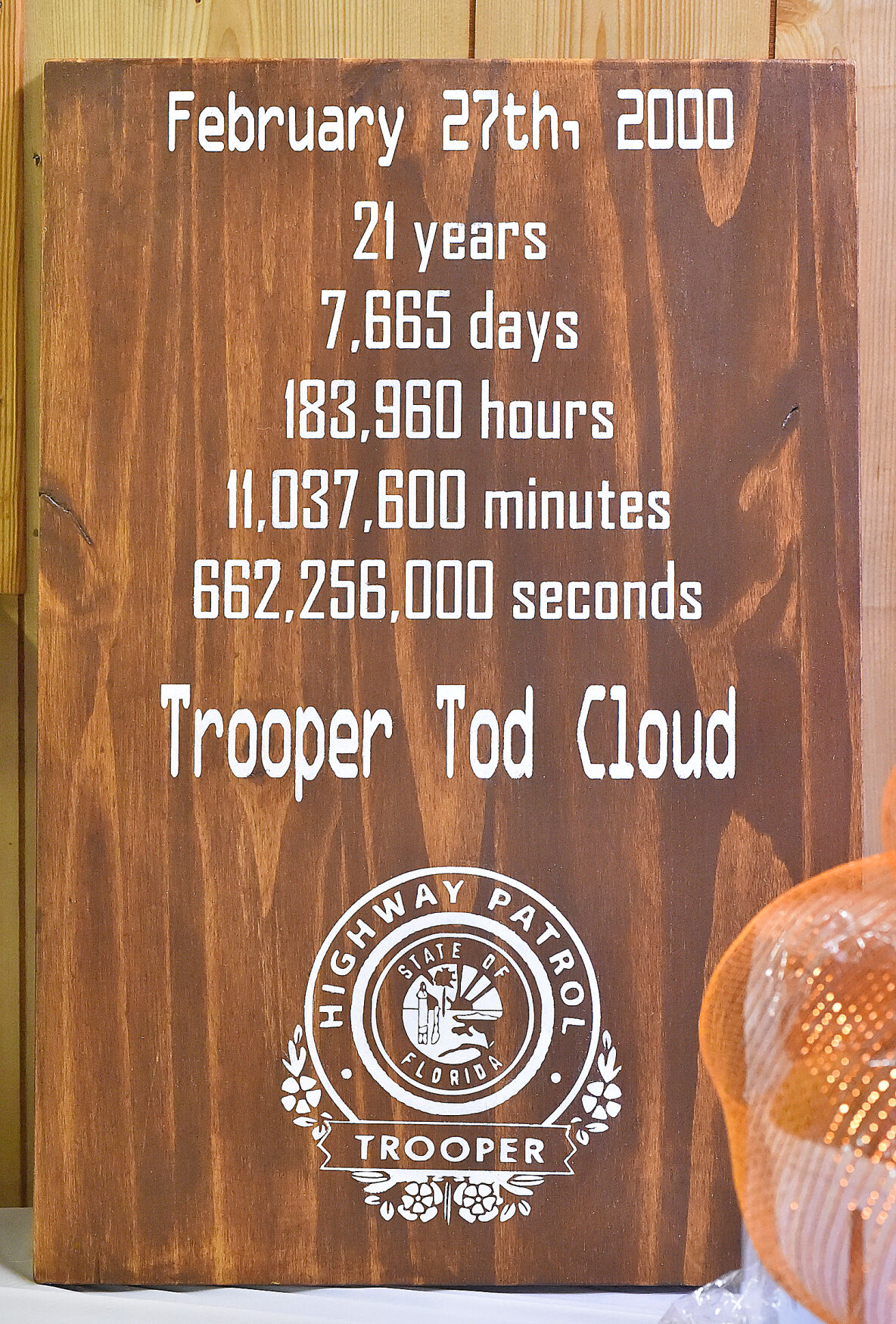 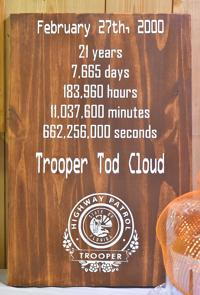 A wooden plaque detailing his work waits to be presented to Master Trooper Tod Cloud.

Florida Highway Patrol Master Trooper Tod Cloud retired Thursday, April 1, after 21 years as a highway patrolman stationed in Citrus County. Cloud, who has roughly 31 years of law enforcement under his belt, also served as a corrections officer in Sumter County, and as a policeman with the Crystal River and Interlachen police departments before becoming a trooper. Following are some vignettes shared by county residents.

“Trooper Tod Cloud has ticketed me four times, pulled me over at least six. Every time my heart stops. I know right of the bat not only did I break the law ... but I put my friend and mentor in situations he doesn’t like to be in. I can honestly say, I learn something each time. Respect and honesty always win. I’ve seen both fear, professionalism, kindness, faith and passion for God, family, job and this county from Trooper Cloud more times than I can count. He’s constantly teaching me. I have been blessed with the friend my family and I consider him. Trooper Tod (mama only thought he needed one “d”) Cloud; you will be missed. Not only by my kids, but by the many kids in Citrus County. From YMCA Halloween Trunk or Treats with Lil Johnny Rollover Car, to Nature Coast EMS Trunk or Treats, and all the behind the scenes stuff you do ... you changed lives here, especially mine … for the better.”

“Tod ticketed my brother Gator and I commended him for that as my brother deserved it.”

“He’s the one in the all-black car. I wave to him on a daily basis. God bless him and happy retirement.”

“I was ticketed for no seatbelt. But a valuable lesson was instilled. He shook my hand and offered success for my daughter who’s a trooper in Massachusetts.”

“A very serious guy; he’s never pulled me over!”

“Trooper Cloud does his job and he’s a respectful guy.”

“We witnessed a wreck; had to do Zoom meeting for court; Trooper Cloud didn’t make it … judge said he was late; Trooper Cloud said he’s always on “Trooper Time” months later (Mann) got notified that he was counted in the meeting.”

“Trooper Cloud is very professional, maintains ‘a to the books’ persona. Never gives into personal side. Even at community events.”

“I was pulled over rushing to a game; he’s tough and fair. It was a work zone. Citrus County will remember his devotion to highway. He won’t be missed on the roads; and good luck with retirement.”

“Trooper Cloud’s very involved with kids and community. (I) cannot believe he’s retiring! He does his job well; he pulled me over doing 61 in a 55!”