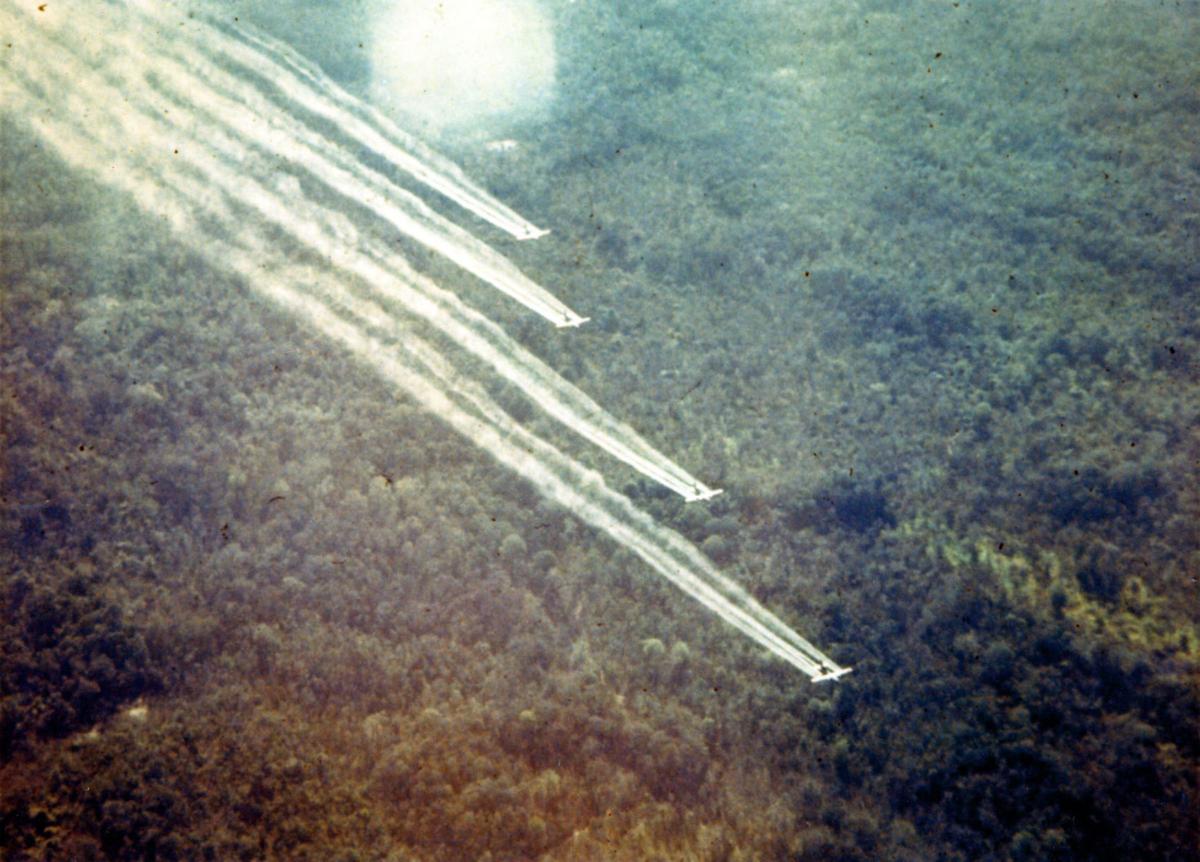 A four-ship formation flies on a defoliation spray run in Vietnam.

It is late at night and I am sitting in our recently purchased Citrus County home, acquired while we address and I recover from a serious illness, and was doing some research on the Vietnam War for an upcoming issue of my volunteer effort, nonprofit veterans magazine. One of my articles will address Agent Orange exposure in that war, an event many people do not know about or simply have forgotten. Sadly, there are many Vietnam War veterans in America now dying because of their exposure to Agent Orange spraying in the war. It has been reported the number of Vietnam veterans affected by that chemical is astonishing with roughly 300,000 veterans having died — that’s almost five times as many as those lost in combat. Roughly 2.8 million U.S. military personnel — out of 7.4 million total — who served in Vietnam between 1962 and 1971 were exposed. Many more deaths from it are in the future.

What was Agent Orange, why was it sprayed and how did it impact our veterans? These are questions I address nearly daily to the young and old in our area and around the country. In the past month, alone, I have explained Agent Orange and its impact on our veterans to nurses, family members of veterans, hospital workers, cashiers, middle schoolers, high schoolers, members of our church, teachers, neighbors and younger veterans. I am tired of trying to explain what Agent Orange was, the tragedies it has caused and why we are losing so many veterans from exposure to it. I am tired of explaining the health impact of it to our family members for generations to come. But, once more, I’ll explain it to you. If you do not know about Agent Orange, I think you will be fully knowledgeable after reading my information and I hope you will pass it on to those who also do not know and did not read this article.

So, let me tell you about the poison of war.

America sprayed more than 20 million gallons of various herbicides over Vietnam, Cambodia, Laos and other locations from 1961 to 1971. The jungle provided concealment and cover for Viet Cong insurgents and began as an idea in 1961 on a White House list of “techniques and gadgets” that might be tried in lieu of all-out combat. And, Operation Ranch Hand in the Vietnam War began. It took an aircraft four minutes to empty a 1,000-gallon tank and cover an area 10 miles long and 260 feet wide. Agent Orange kills vegetation of all types, destroying roots as well. Leaves die and fall off, transforming a thick forest into a mass of barren trees. Once green areas turn black. At its peak in 1969, there were 25 spray planes and the results went far beyond anything the White House ever imagined.

Local commanders and ground forces loved the spraying and the operation expanded to spraying from backpacks, trucks and riverboats. In some areas, concentrations in soil and water were hundreds of times greater than the levels considered safe by the U.S. Environmental Protection Agency. Military commanders ordered frequent defoliation campaigns, because killing off the foliage resulted in fewer casualties for our military. Or until history proved otherwise, after we drank contaminated water, touched the Agent Orange on jungle plants, ate contaminated food, were sprayed from above, and bathed in it at rivers and streams.

The herbicides came in 55-gallon drums marked with colored bands four inches wide. The defoliants were named for the color of the bands: Agents Blue, Green, Pink, Purple, White, and the most famous of all, Agent Orange, referred to simply as Orange. The latter containing the poisonous chemical dioxin, which was the most commonly used ingredient, and was sprayed at up to 20 times the concentration manufacturers recommended for killing plants. It could destroy jungle foliage in a very short period of time. Unfortunately, dioxin is highly toxic — even in minute doses — and accumulates in fatty tissue. Serious health issues in veterans resulted in exposure to this poison and the list of diseases seems endless. Cancer, neurological problems, heart disease and numerous other diseases are attributed to Orange. For example, a nonprofit group by the name of ZERO — The End of Prostate Cancer, an organization dedicated to prostate cancer education, testing, patient support, research and advocacy recently reported that veterans are twice as likely to have prostate cancer than civilian counterparts. In fact, nearly 489,000 prostate cancer patients are in the Veterans Administration health system. Over 16,000 of these patients have metastatic prostate cancer. I usually say there are 489,001. Because, after exposure to Agent Orange in Vietnam and Thailand, I have prostate cancer and am currently undergoing radiation treatment. Along with my Agent Orange-caused Ischemic Heart Disease that resulted in double cardiac bypass at 49 years of age, along with more other heart procedures than I can possibly count on both hands, in conjunction with severe neuropathy and a number of other medical issues I must deal with daily. I don’t seek sympathy but have simply joined the hundreds and hundreds of thousands of other Vietnam veterans dealing with Agent Orange. Those still alive.

It took until February 1991 before our government recognized the impact of our exposure and the Agent Orange Act was passed that said any veteran of military, naval or air service in Vietnam would be “presumed to have been exposed” to a herbicide containing dioxins and that there would be a “presumption of service connection” if the veteran contracted a disease specified in the act. Three such medical conditions were listed: non-Hodgkin’s lymphoma, soft tissue sarcoma and chloracne. The original list of three presumptive diseases has now grown to 14. Of these, six are types of cancer, including prostate cancer.

On Jan. 1 of this year, our government finally accepted the fact that sailors sitting off the coast of Vietnam, known as Blue Water Sailors, would be considered for disability ratings for their obvious exposure. Think about that date. It is 48 years after spraying ceased. How many that were exposed are alive today? We Vietnam Veterans have a saying about this continual failure to recognize our illnesses caused by Agent Orange: “Deny, deny, wait until we die.”

More bad news. We have learned that Agent Orange is not just sickening veterans but also causing birth defects in our children, some having unusual defects — missing limbs, extra limbs and other diseases — that didn’t run in our families. The VA makes payments only to male veterans with children who have spina bifida, in which the spinal cord doesn’t develop properly, and the children of a small number of female Vietnam veterans having 18 other diseases ranging from cleft lip and palate, to syndactyly — fused digits. This failure to acknowledge the impact of Agent Orange exposure ignores the vast majority of our veterans ailing children. But there is more bad news. Birth defects and heart problems are showing up not only in our children, but our grandchildren. Dr. Michael Skinner, with Washington State University’s Center for Reproductive Biology, has studied the transgenerational health effects of dioxin exposure using animals and says women who served in Vietnam and were exposed to Agent Orange could have passed the dioxin to children for at least 15 to 20 years after they returned home.

“The problem with dioxin or Agent Orange is that it stays in the system for a very long period of time,” he said.

Therefore, we Vietnam War veterans are passing it into the future of America.

You have now received my rudimentary lesson of Agent Orange. It is a subject now rarely being taught in many schools, or found in the media, and in a few short years most of us Vietnam War veterans will be gone, along with the history of what has happened to us. However, I want to try and keep the memory alive of our being poisoned. Please tell your children, your grandchildren, your friends, your neighbors. Let our unfortunate legacy live on into history so that we will be remembered and honored for our sacrifices.

To my brothers of the Vietnam War, welcome home.

John Stewart is a retired Air Force chief master sergeant, disabled Vietnam War veteran and has been a veterans advocate for nearly three decades. In 2016 he was inducted into the Florida Veterans Hall of Fame for his volunteer service. You can learn more about him at www.veteransgrapevine.com.

My brother has had multiple health problems for being exposed.Leukemia. heart disease., peripheral neuropathy. There's a draft dodger at 1600 Penn. Ave. who wasn't exposed because he bought his way out.

Most of the 80,000 chemicals used in the US haven't been adequately tested for their effects on human health. And people think political correctness is killing America?

Thank you for sharing, both my brothers died from exposers to agent orange

I am so sad to know about your losses. They were truly heroes.

State lawmakers want to impose term limits on school board members. Is this a good idea?