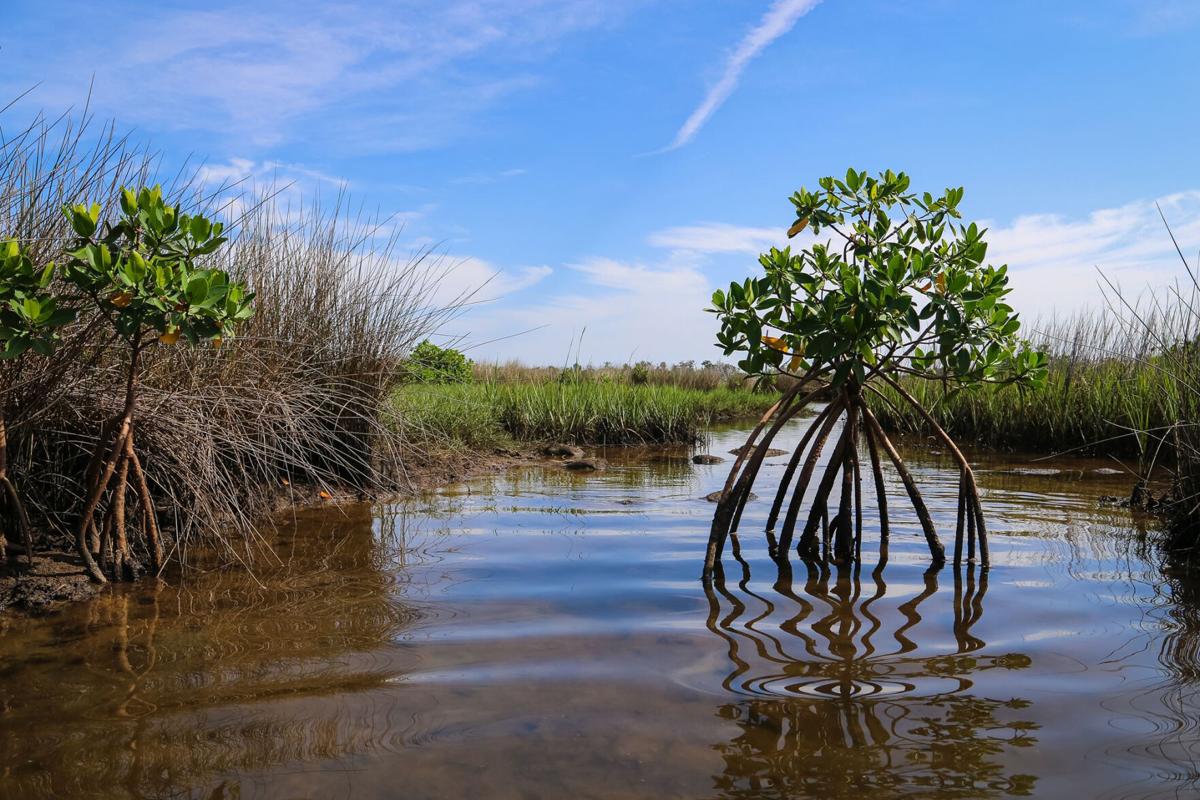 The second-place winner for the Save Our Waters Week annual photo contest was Laynee Nadal of Crystal River, who was drawn by the symmetrical roots of a mangrove tree in the tranquil, mid-morning waters of Ozella.

The river and bay we see today are not the same ones I remember from the early ’70s. It’s certainly not the natural wonder some of our lifelong residents saw long before then.

Crystal River appeared on the map when Florida Power Corporation built the first power generating units in Citrus County, Units 1 and 2, in the 1960s. To make way for development for the people flocking to the area supporting the new power plants and the many residual industries that followed, developers bulldozed pristine wetlands to create canals and waterfront property. A direct impact was that what once served as natural filters for the river are now paved roads, houses, and fertilizer hungry lawns.

Most recently and through the success of our Tourist Development Council (TDC), the world has found our natural beauty and has made Crystal River a worldwide tourism destination visited by hundreds of thousands of people each year.

All of these actions are collectively taking their toll on the River through the introduction of harmful nutrients, pollutants, erosion, and alteration of the natural filters that once cleansed the water entering the system.

As a result of this, our beloved River has suffered irreparable harm.

While it is impracticable to think that the river will look like it did before man stepped foot in this town, there are many things we can do, and are doing, to help restore the river.

Led by the efforts of the Save Crystal River (SCR) organization, that paradigm is changing before our eyes.

Funding through springs money provided by the Florida Legislature has allowed SCR to remove noxious sediments in our waters and replace it with nutrient hungry native eelgrass. They are creating a manmade natural filter before our eyes. This effort is only possible through the springs money funneled from Tallahassee that deserves a huge shout out to Sen. Wilton Simpson and former Sen. Charlie Dean for making that happen.

The springshed is the area that feeds the Crystal River and is composed of approximately 250 square miles of urbanized and agricultural lands, forested uplands, and wetlands. Anything that happens in this area can have a positive or negative effect on the water feeding the Crystal River.

Almost half of the harmful nutrients entering the spring come from the tens of thousands of septic tanks already belching nutrients into the springshed. The city of Crystal River and Citrus County have proactively been replacing septic tanks and connecting homes to a centralized sanitary sewer system for decades.

That effort got a huge boost by the influx of springs money that can be used to offset the expenses of installing sewer systems. These projects are not always popular due to the fact the homeowner is often asked to contribute to the cost and is left with a monthly sewer bill, but it is the right thing to do.

The vast number of tourists and residents using the river for recreation is also putting a strain on the resource. On any given weekend, you will find hundreds and hundreds of people fishing, diving, kayaking, swimming, manatee watching or just plain relaxing on the river.

Also, almost 50 boats have dropped anchor in King’s Bay and don’t seem to leave. Some are visitors passing through town, which is good. Most of the others seem to be permanently stored. Many are abandoned and left to rot. All of these moored boats cause significant safety issues to boaters as well as environmental concerns regarding the improper disposal of waste in the bay.

To adequately address these issues, we need one set of consistent rules on Kings Bay. Currently, half of the bay is within city limits, and the other is not. The city of Crystal River recently began the process of annexing the other half of the bay. Once annexed, these issues can be addressed with one common set of rules.