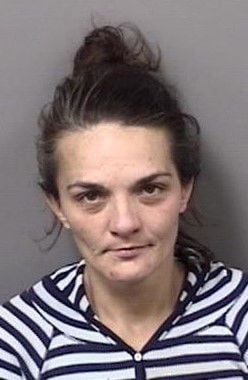 A Crystal River woman attempted to go on a shopping spree with stolen debit/credit cards booked herself a room at the Citrus County Jail, according to a Citrus County Sheriff’s Office arrest report.

Amanda Nadine Hamilton, 35, of Crystal River, who was arrested Monday, now faces one charge of a burglary of an occupied structure and three counts of fraudulent/illegal use of a credit card. Her bond was set at $21,000, per reports.

According to the report, deputies were called Feb. 23 to the 6200 block of West Pine Circle in Crystal River in reference to a burglary. Upon arrival, law enforcement authorities made contact with the victim who advised their vehicle, which had been parked in the garage, had been entered by an unknown suspect(s). The victim told deputies they were missing their keys, credit/debit cards, personal identification and their purse/wallet.

During the investigation, the victim told deputies on Feb. 24 she was notified by her bank on Feb. 22 that she received a fraudulent use text message at 11:30 p.m., which occurred at the Race Trac in Crystal River. The first message indicated her card was charged $137.3 and the second transaction for $146.99. The first transaction, the report stated, went through.

In a follow-up with the victim, they told authorities they had returned home at about 10 p.m. Feb. 22 when they left their items unsecured in the vehicle, which had been parked in the garage, the report stated. The victim told deputies the burglary must have occurred between 10 and 11 p.m. Feb. 22.

Deputies proceeded to the Race Trac at 1001 NE 5th St. in Crystal River where they spoke with the manager on duty regarding the timeframe and last four digits of the card used. The manager was able to locate the transaction with the card, verifying the exact amount and approximate time the card was used. The manager, the report stated, and the deputies were able to review the security footage where a white female, later identified as Hamilton, use a credit card attempting to pay for the merchandise on the counter.

According to the report, the victim contacted authorities March 4, notifying them they had received a notification that someone had attempted to use their credit card at the CVS in Beverly Hills. The charge had been in excess of $360, however, the charge did not go through because the victim had put a lock on their card.

Deputies then made contact with the store manager, the report stated, notifying them the canceled transaction was for $375. The manager reviewed security footage in which a white female entered the store with another white female. The deputy recognized one of the females as Hamilton. After a short while, a woman who was believed to be Hamilton, attempted to use the credit card. After the transaction was denied, Hamilton left the store without any of the items.

According to the report, deputies were able to confirm Hamilton's identification through surveillance photographs.

Deputies made contact with Hamilton on March 9. She was transported to the Citrus County Jail, where he was booked on the aforementioned charges.