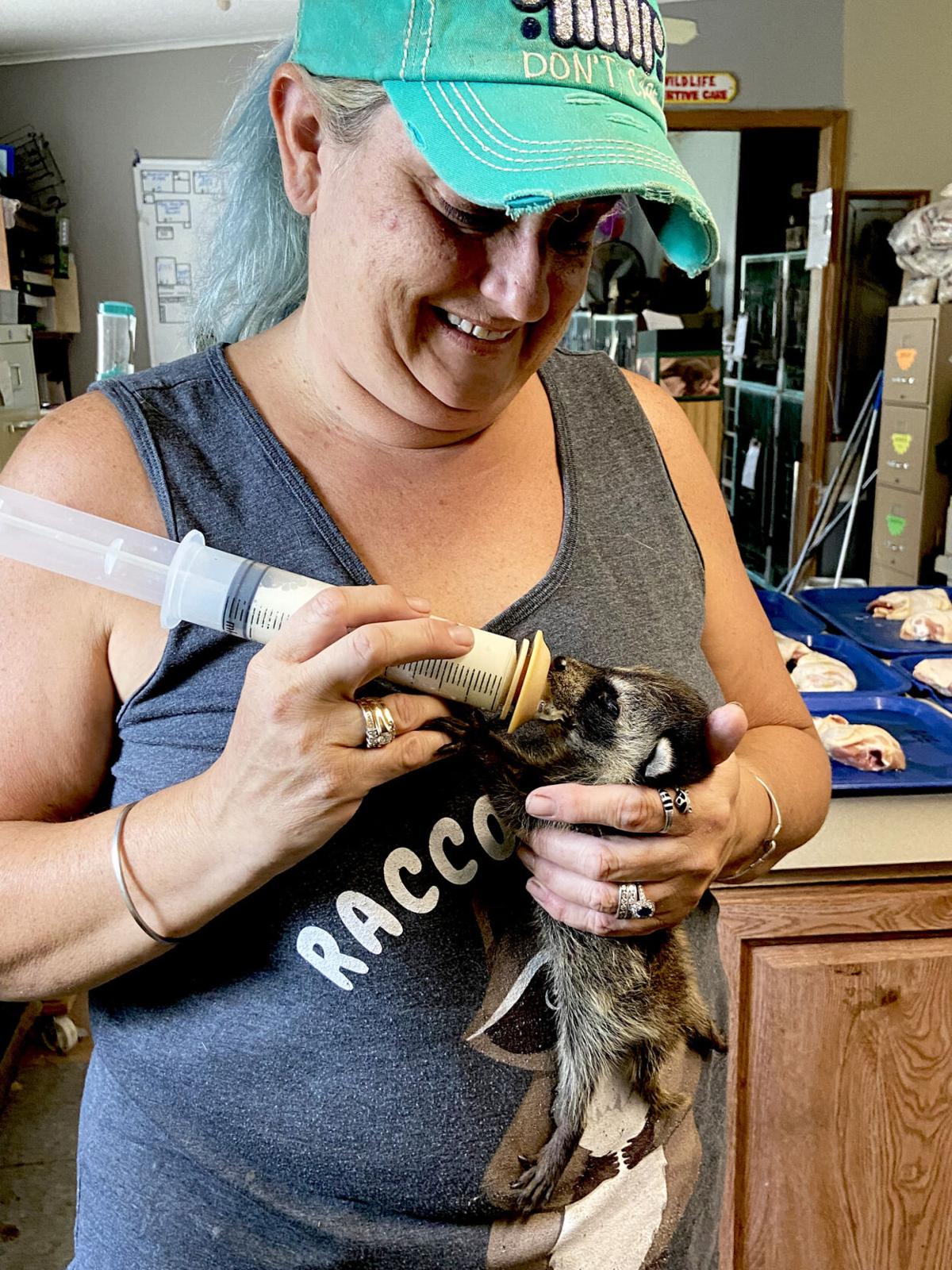 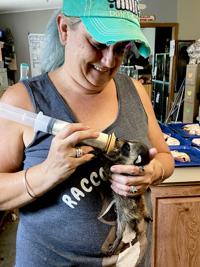 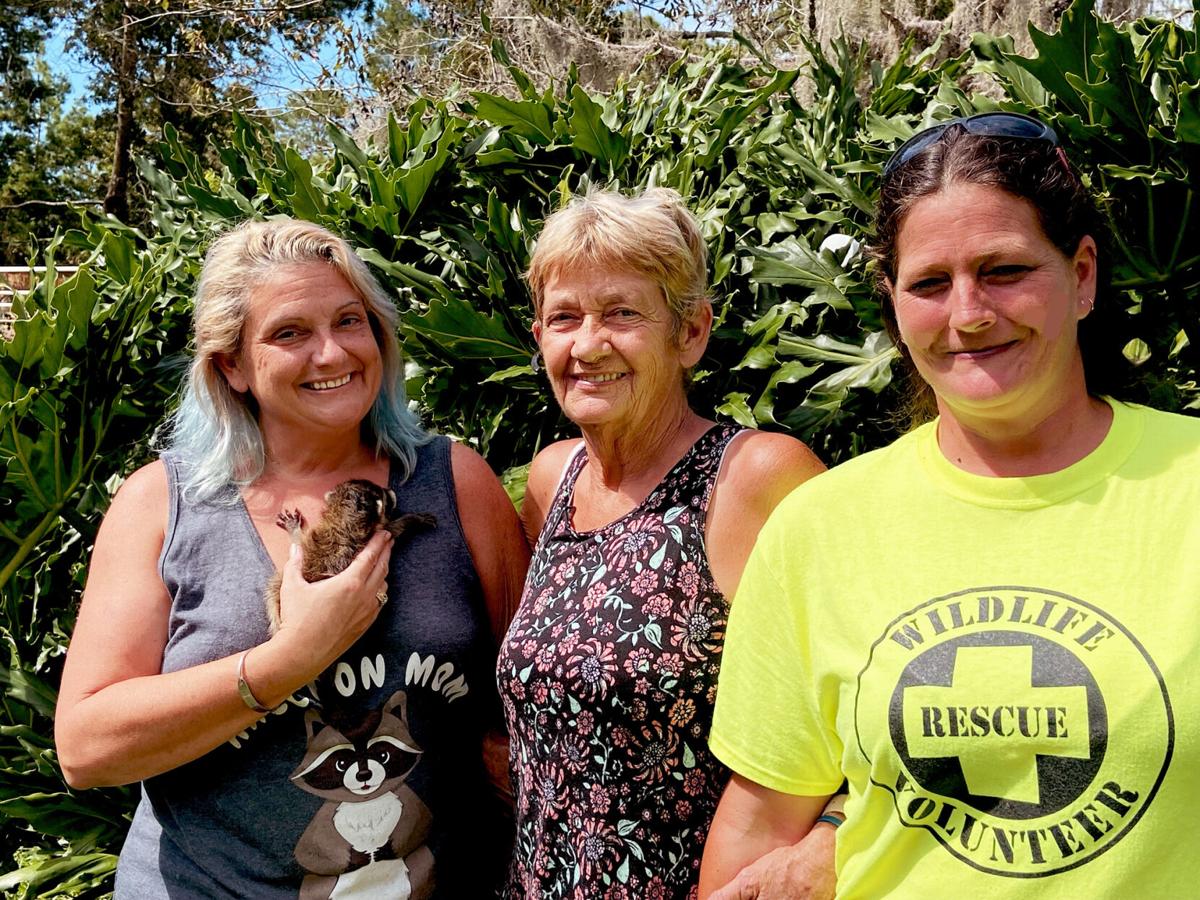 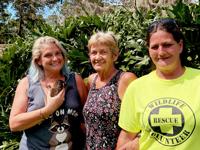 From left, Sonja Bussiere with a baby raccoon, Mary Opall, and Christina Hunley. Opall is the director of Nature World Wildlife Rescue and Bussiere is the treasurer. All are volunteers. 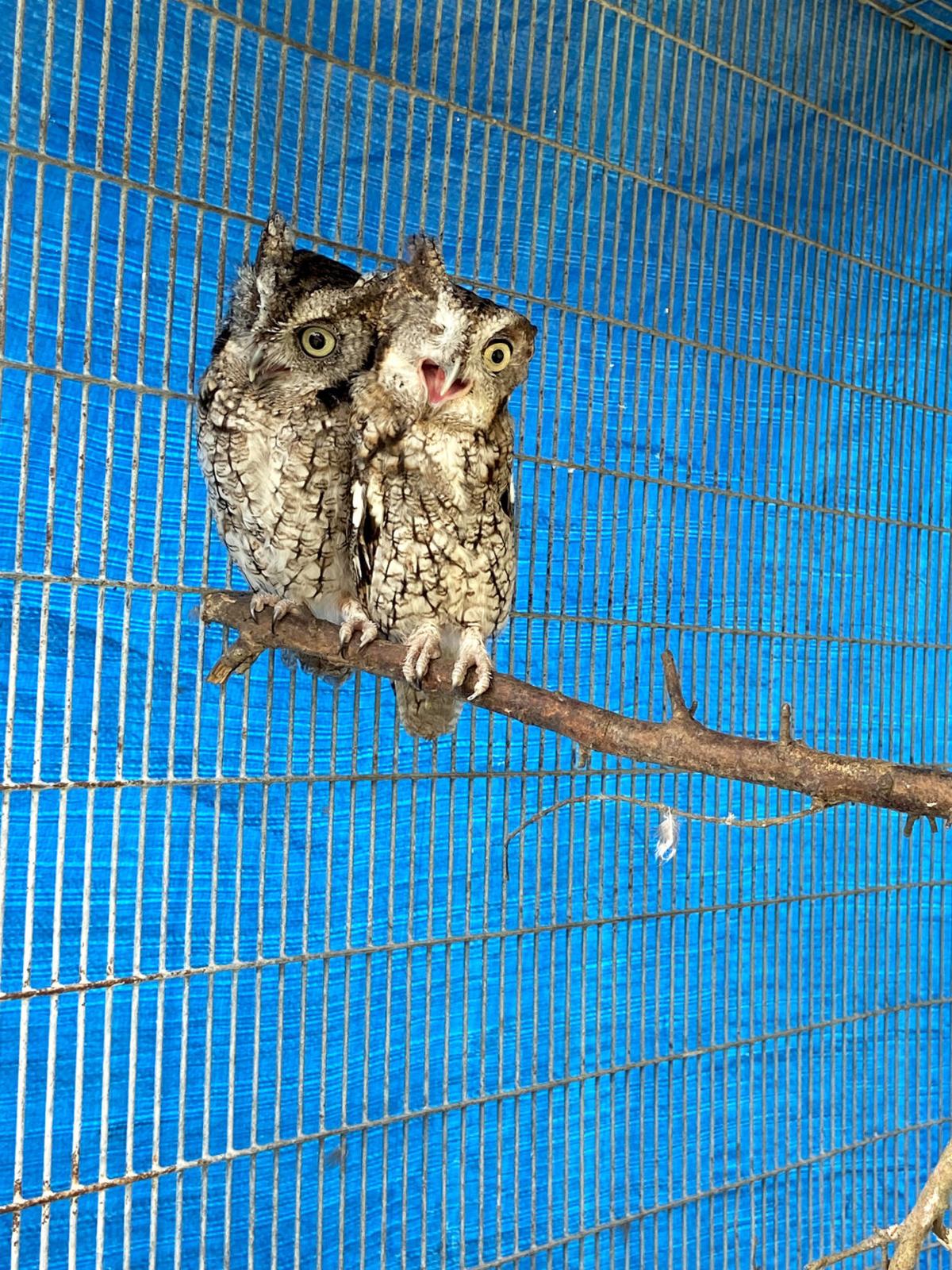 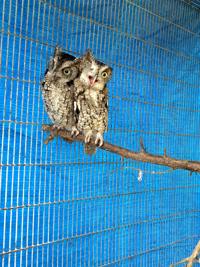 Two screech owls. The one with only one eye serves as an animal ambassador when volunteers take animals out to talk to the public about wildlife. 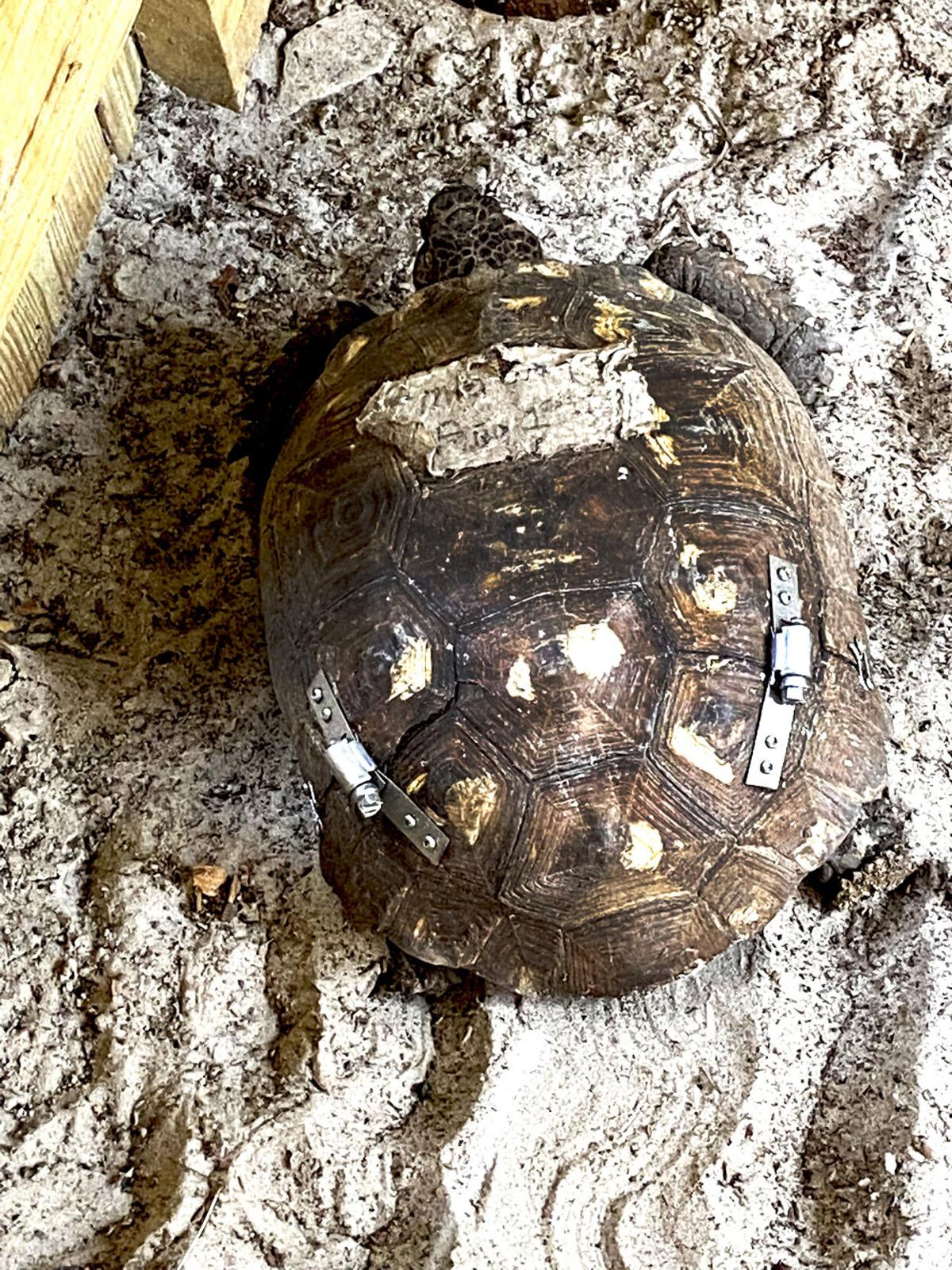 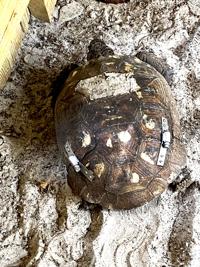 A gopher tortoise whose shell is patched up with surgical screws. The tortoise was hit by a car.

From left, Sonja Bussiere with a baby raccoon, Mary Opall, and Christina Hunley. Opall is the director of Nature World Wildlife Rescue and Bussiere is the treasurer. All are volunteers.

Two screech owls. The one with only one eye serves as an animal ambassador when volunteers take animals out to talk to the public about wildlife.

A gopher tortoise whose shell is patched up with surgical screws. The tortoise was hit by a car.

From a modest trailer near the end of an obscure road in Homosassa, Nature World Wildlife Rescue offers a last chance for freedom to the approximately 500 wild animals it annually tries to save from broken wings, dislocated limbs, bug infections, and the other traumas they’ve suffered.

Before COVID, about 1,200 wild animals were assessed and treated annually by the all-volunteer staff of the nonprofit group that was founded in 1985 by the former Homosassa Springs Nature World attraction and veterinarians K.C. Nayfield and Mark Lowe of Midway Animal Hospital in Homosassa.

Today, Mary Opall owns the property, holds the permits, and is the director of the facility, which she said is the only freestanding wildlife rescue in an eight-county area. Sure, there are other rescues, but they mostly operate out of people’s backyards, according to Opall.

The group is funded through donations. It does not receive any government money. That makes it tough to pay the $30,000 a year it costs to feed the animals who are undergoing rehabilitation, not to mention the utility and supply bills, and other costs.

Yet, the facility has saved up enough money to upgrade its building. The Nature World volunteers expect another single-wide trailer to be set up soon, but it would be nice if they could upgrade to a double-wide, they said.

Meanwhile, the volunteers are content to tend to their furry and feather-bedecked visitors to see what they can do to get the animals released back to nature.

“My passion is to see them be released,” Opall said. “That is a success, for sure.”

Not all the animals can be released. Some have to be euthanized because their injuries are too serious. Others who wouldn’t survive in the wild but who, nevertheless, could successfully live out their lives with a little TLC may become longtime residents and part of Nature World’s menagerie of animals used for educating children and the greater public about how to respect wildlife.

Nature World works closely with veterinarians to assess and treat animals and to determine which ones can be saved, the volunteers said.

“You have to do what’s best for the animals,” Bussiere said.

Before COVID, the volunteers would take some of the animals with them when they gave talks at schools or set up booths at area festivals.

Things are a little quieter since the pandemic set in — but not that quiet.

On a recent Saturday, Sonja Bussiere, who’s the group’s treasurer, was answering the phone and driving around the area in her jeep, picking up five baby squirrels, four baby raccoons, and a baby opossum.

Bussiere rehabilitates Nature World’s raccoons and deer at her home.

During a recent visit to Nature World, there were all manner of birds, gopher tortoises, a coyote, and at least one baby raccoon in residence. Opal said the cast of animal characters constantly changes.

And each tortoise, bird, or animal has its own story, as do the people who work at the Rescue, as well as those who phone the facility and have spotted an animal that’s in trouble.

Bussiere, Opall, and volunteer Christina Hunley told of a female semi driver who was passing through Ocala on the Interstate. She spotted a grounded red-tailed hawk, captured the bird, and put it in her truck. She phoned Nature World as she headed for Arkansas.

She received advice on how to care for the hawk while she was on the road, and when she returned five days later, she drove the bird to Nature World.

“We took care of it, fattened it up, and released it near Ocala,” Opall said.

Then, there was the blind deer who fell into a gravel pit and later was patched up, the swan whose mate had died who was coaxed to stop grieving, and the tortoises hit by cars whose shells are mending with the help of surgical screws and safety pins.

There also was the grounded young eagle with an eye problem.

A veterinarian initially assessed that the bird had a fungal infection and prescribed appropriate medicine. When the eye didn’t improve, a volunteer said, “Let me see.”

Upon close inspection, the volunteer discovered a tick in a fold of the eagle’s eye. When the tick was removed and antibiotics prescribed, the eagle perked up and soon could see, fly, and be released.

Opall, Bussiere, and Hunley each have unique stories to tell, too, of how they got involved in saving wild animals’ lives.

Opall met a woman from Nature World at a festival, who invited her to a meeting. Next, the woman told Opall they were going to rescue a young sandhill crane.

Opall said she drove the woman near where the crane had been spotted, and they looked and looked until suddenly, the woman screamed, “There he is.”

Opall didn’t see him. She was looking near the ground for a baby bird.

“Well, he’s looking right at you over that fence,” the woman said.

Opall then saw a rather large crane. The women needed to catch the bird. But how?

Opall’s companion spotted two teenagers and talked them into helping.

The teens chased the bird onto someone’s porch, and Opall threw a net over it. Then the woman from Nature World directed the teens to bundle up the bird and carry it to the car. And they did.

Somehow, the team effort and the success of rescuing the bird persuaded Opall that wildlife rescue was the path she was destined to follow.

Bussiere told how she and her husband were driving along Fort Island Trail when she spotted an injured osprey. She jumped out of the car and approached the bird.

She got the osprey in a box and phoned Opall.

Opall told her to bring the bird to the Rescue.

Bussiere thought she’d just drop off the bird. But Opall asked, “Where are you going?”

Opall needed help holding down the bird and picking bugs off it.

Bussiere helped and was hooked. And the bird was rehabilitated and released.

Hunley was working on construction and her crew had cut down a tree near Homosassa Elementary School. One of the men Hunley was working with called to her and said there had been a nest of baby squirrels in the tree.

Hunley took the little critters home and did what she could to feed them. After days had passed, she phoned Opall to come over and assess when the squirrels might be released.

“They were the biggest, fattest squirrels,” Opall said. “They were so-o-o-o ready to go.”

Undeterred by Opall’s laughter, Hunley asked if she could help at Nature World.

This team of volunteers is always looking for more hands to help out. They could use assistance on most days of the week. And they said if people are a little fearful of feeding and caring for wildlife, there’s always a need for cleanup and other tasks.

They also could use someone to help with paperwork and grant writing.

And although their focus is wildlife, their efforts also have benefited teenagers.

Nature World works with teens in the Juvenile Court system who are assigned to perform community service.

“We treat them (the teens) with respect, and the animals bring them out,” Opall said.

Bussiere said some of the students have gone on to college and studied related subjects, such as biology.

Opall told of one man who thanked her for helping his son, but she rather dismissed him, not seeking praise. Then, he grabbed her arms, looked into her eyes, and said, “Thank you. You saved my son.”

The teen had been referred to Nature World by the court.

“I just treat them like they’re my grandkids,” Opall said. “They’ll come back and visit later and bring their wives and kids.”

Opall said one of her desires is to show that she and her volunteers care as much about wildlife rescue as the Rescue’s founders.

“I hope to make them proud,” she said.

Bussiere and Hunley said Opall certainly does just that.

“Mary’s the heart and soul of this,” Bussiere said.