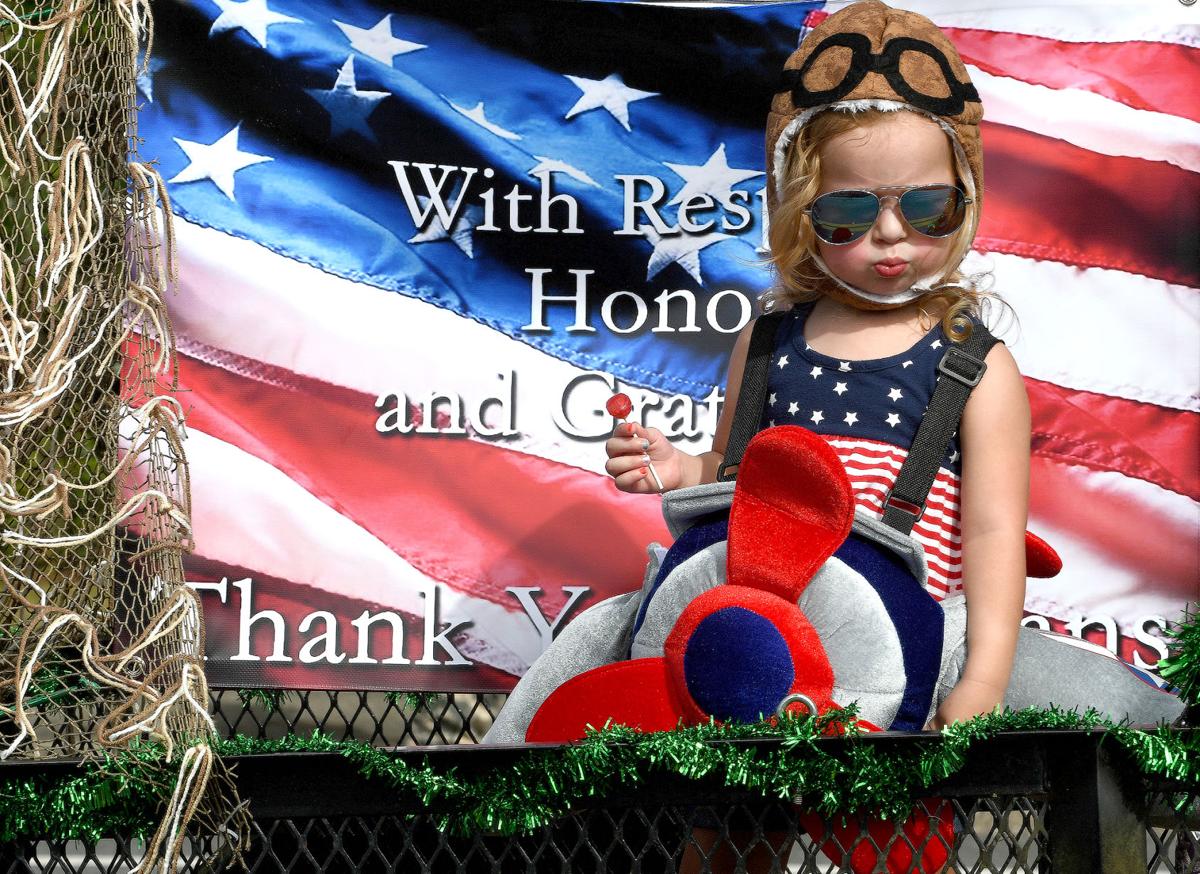 Two-year-old Aracelli Bryant has the aviator look down pat Monday as she rides on a parade float that thanks veterans for their service. The float is sponsored by the Holder Wrecking Crew 4-H Club. 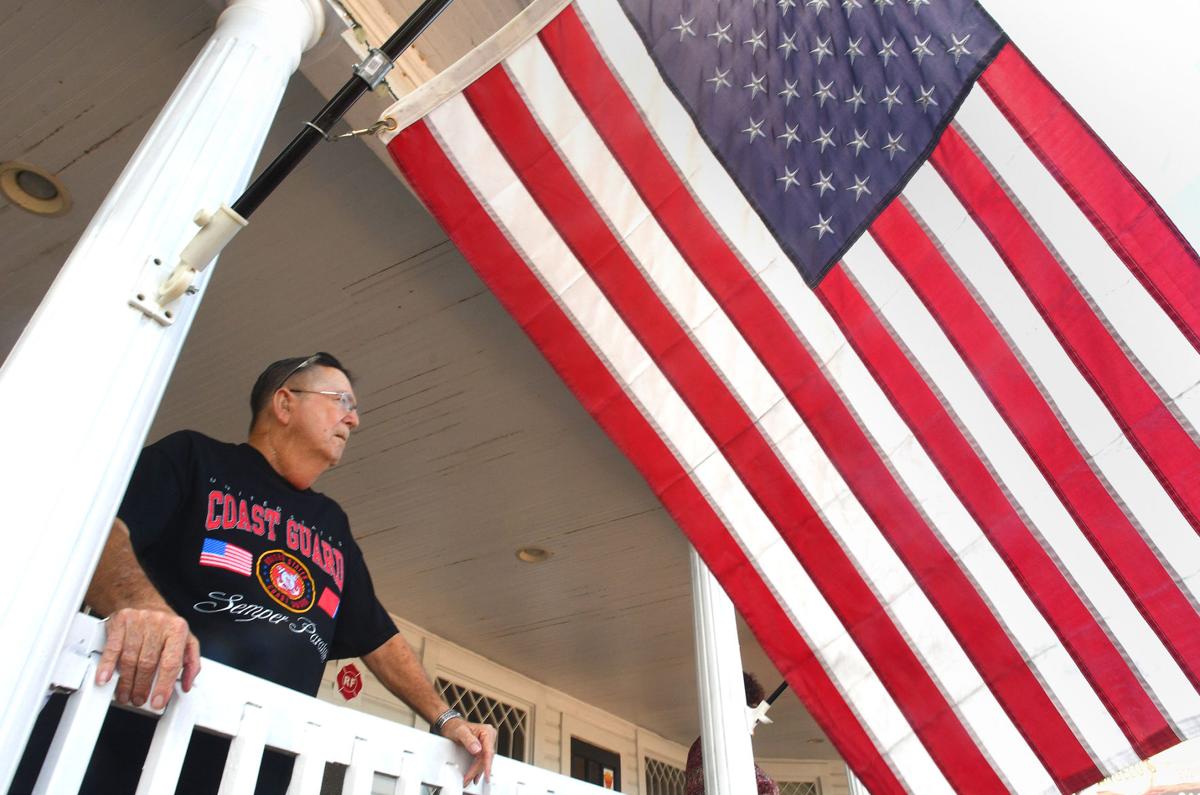 Retired U.S. Coast Guardsman Richard Cornell watches the parade pass by from the front deck of Angelo's Pizzeria in Inverness. Cornell served 32 years in the Coast Guard before retiring. 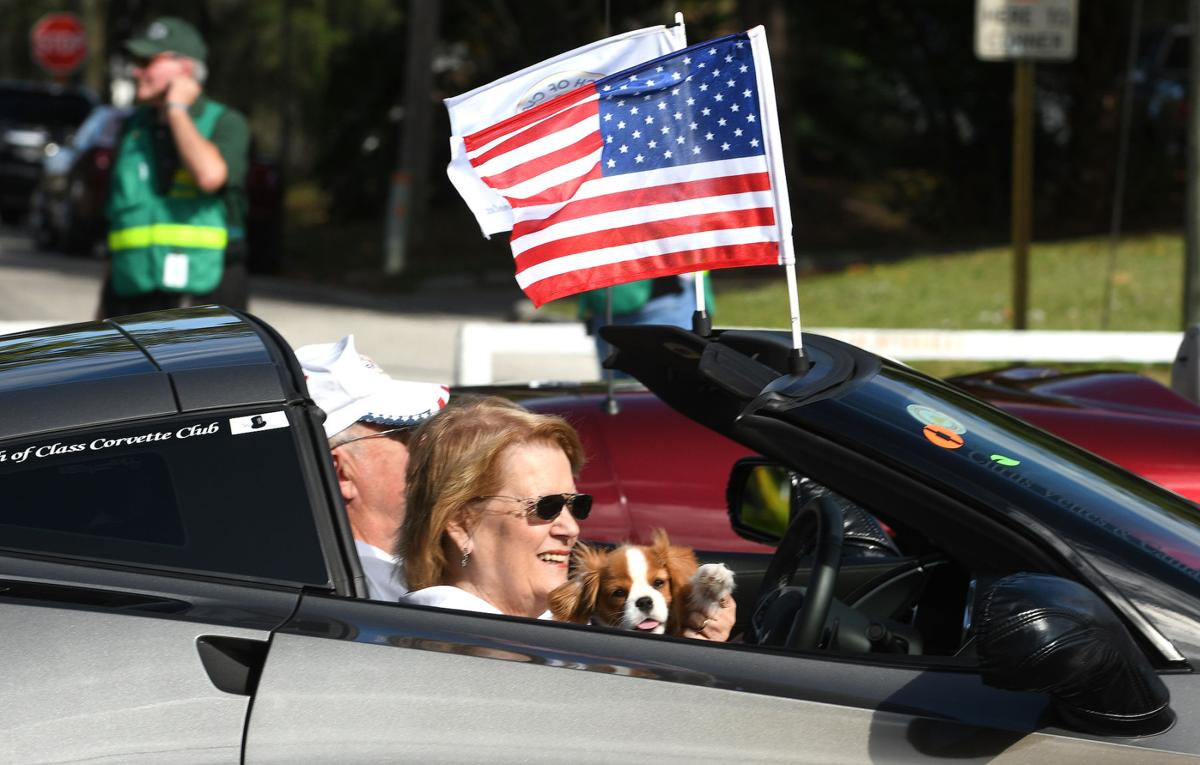 Joan Kaupp holds Lizzie and uses her paw to wave to those along the parade route Monday during the annual Veterans Day Parade in Inverness. Her husband, Bill, drives their Corvette. They belong to the A Touch of Class Corvette Club. 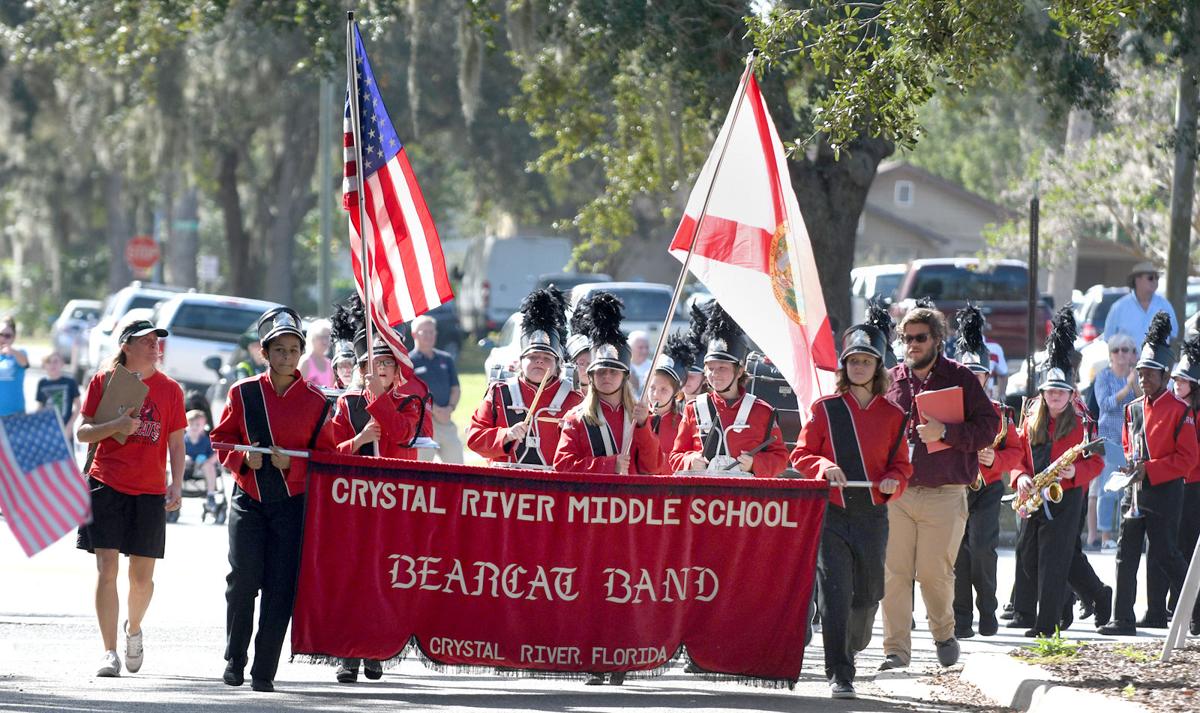 Members of the Crystal River Middle School Band march toward Courthouse Square during the opening portion of the Veterans Day Parade. 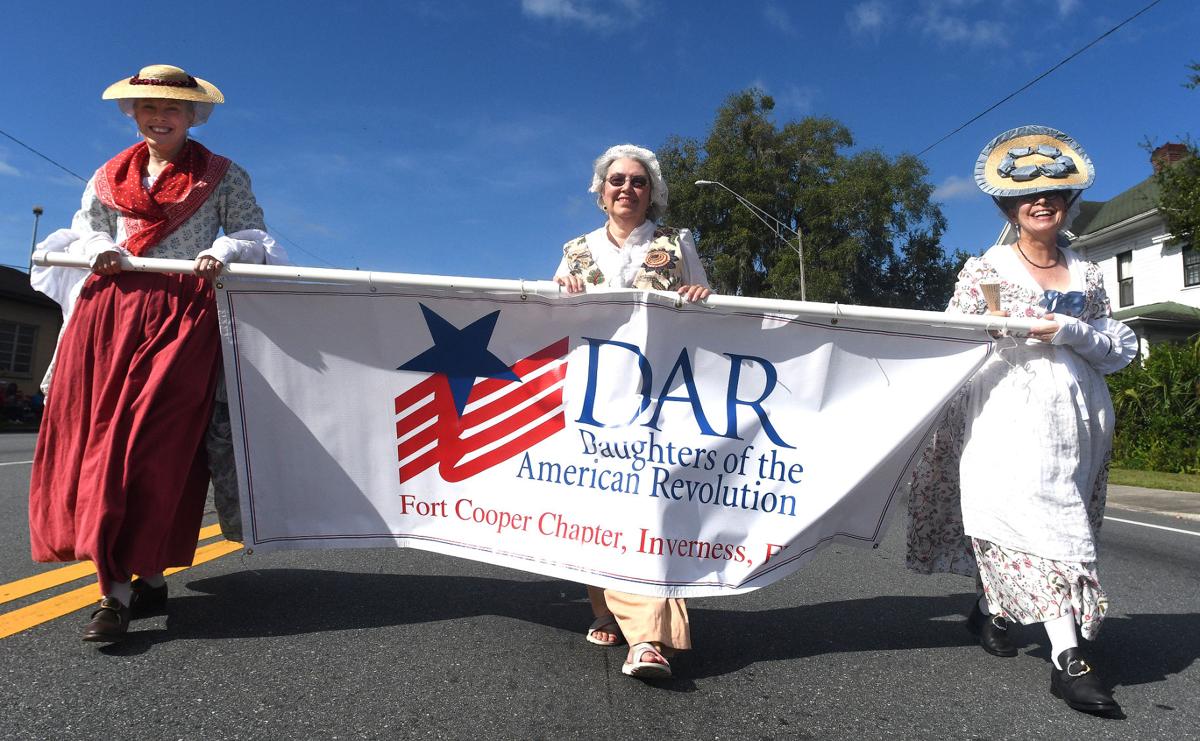 Members of the Fort Cooper Chapter of the Daughters of the American Revolution walk through Inverness as part of the Veterans Day Parade. 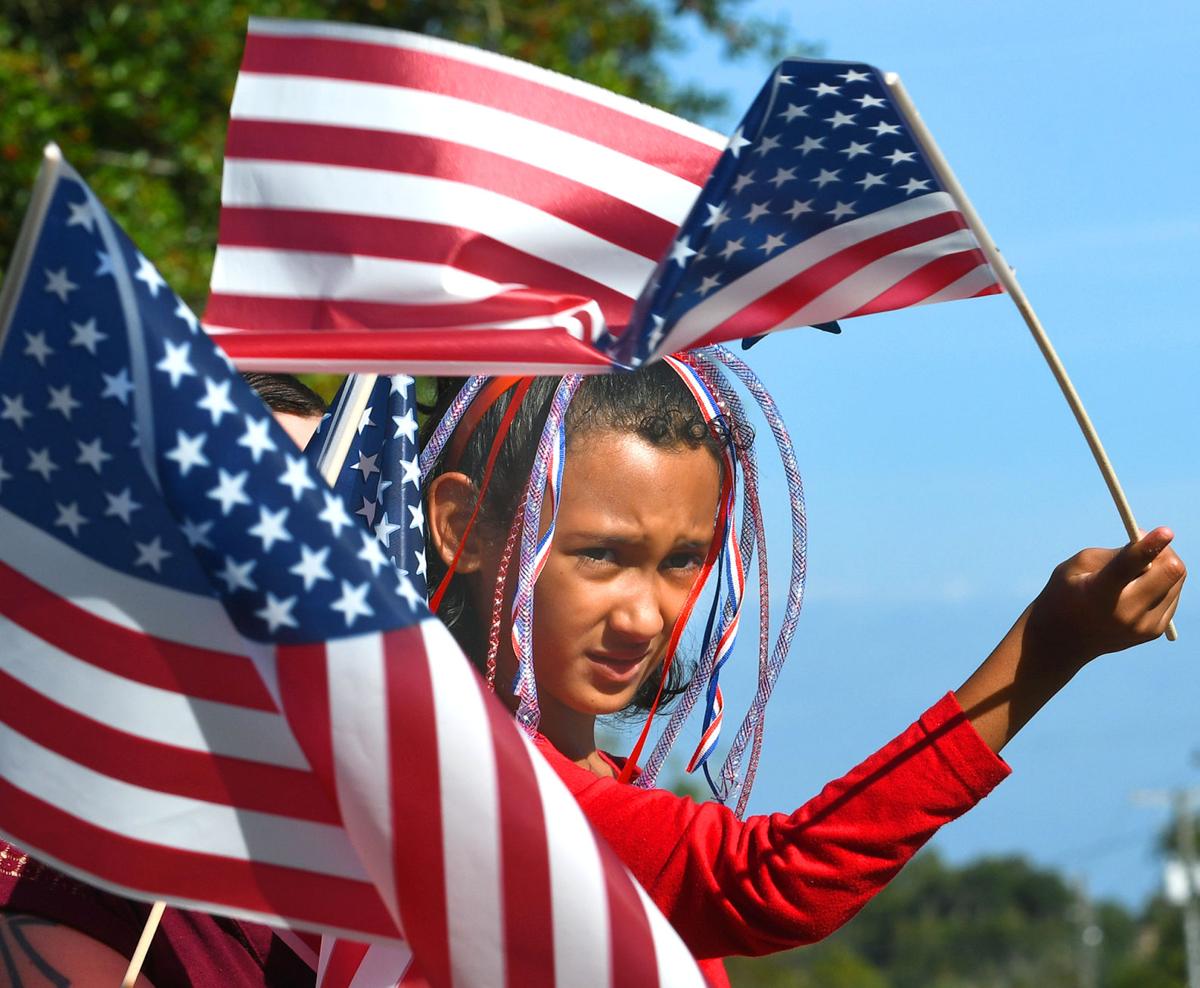 Amarie Forteau, 7, is surrounded in red, white and blue while watching the parade march past her position on Courthouse Square in downtown Inverness during the Veterans Day Parade. She is held by her mother, U.S. Air Force veteran Rebecca Forteau. 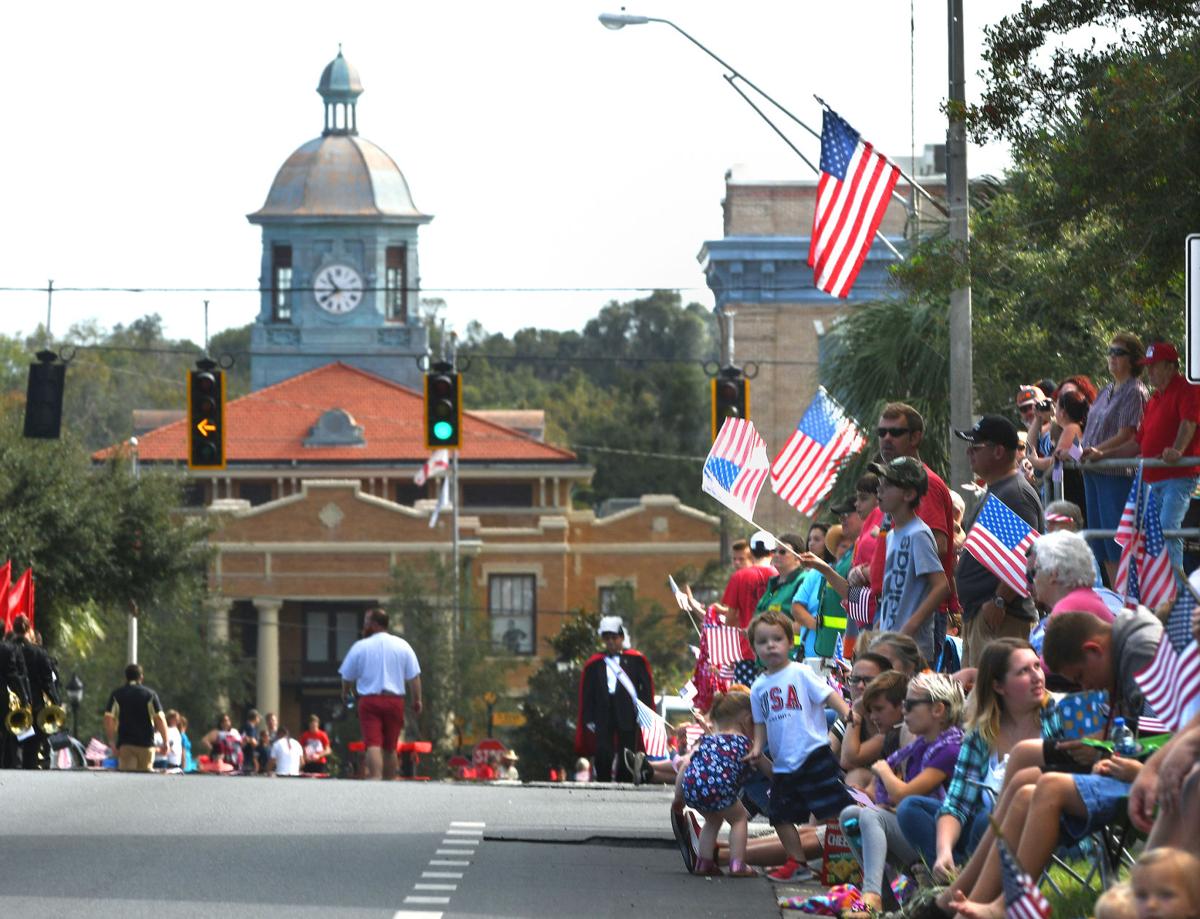 Thousands of parade viewers line Main Street in downtown Inverness to watch the hundreds of clubs, civic organizations, bands and military organizations march past in the 2018 Veterans Day Parade. 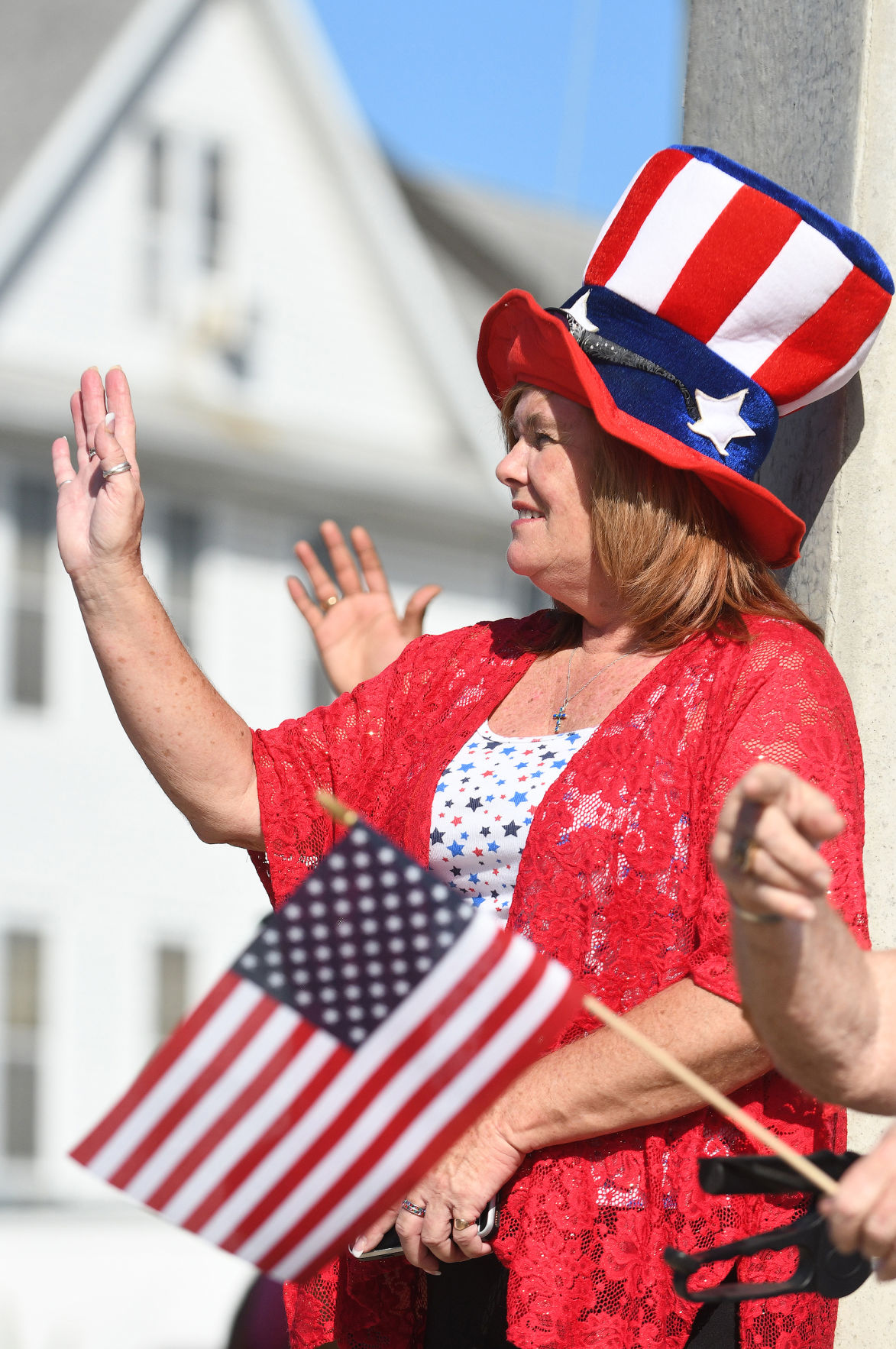 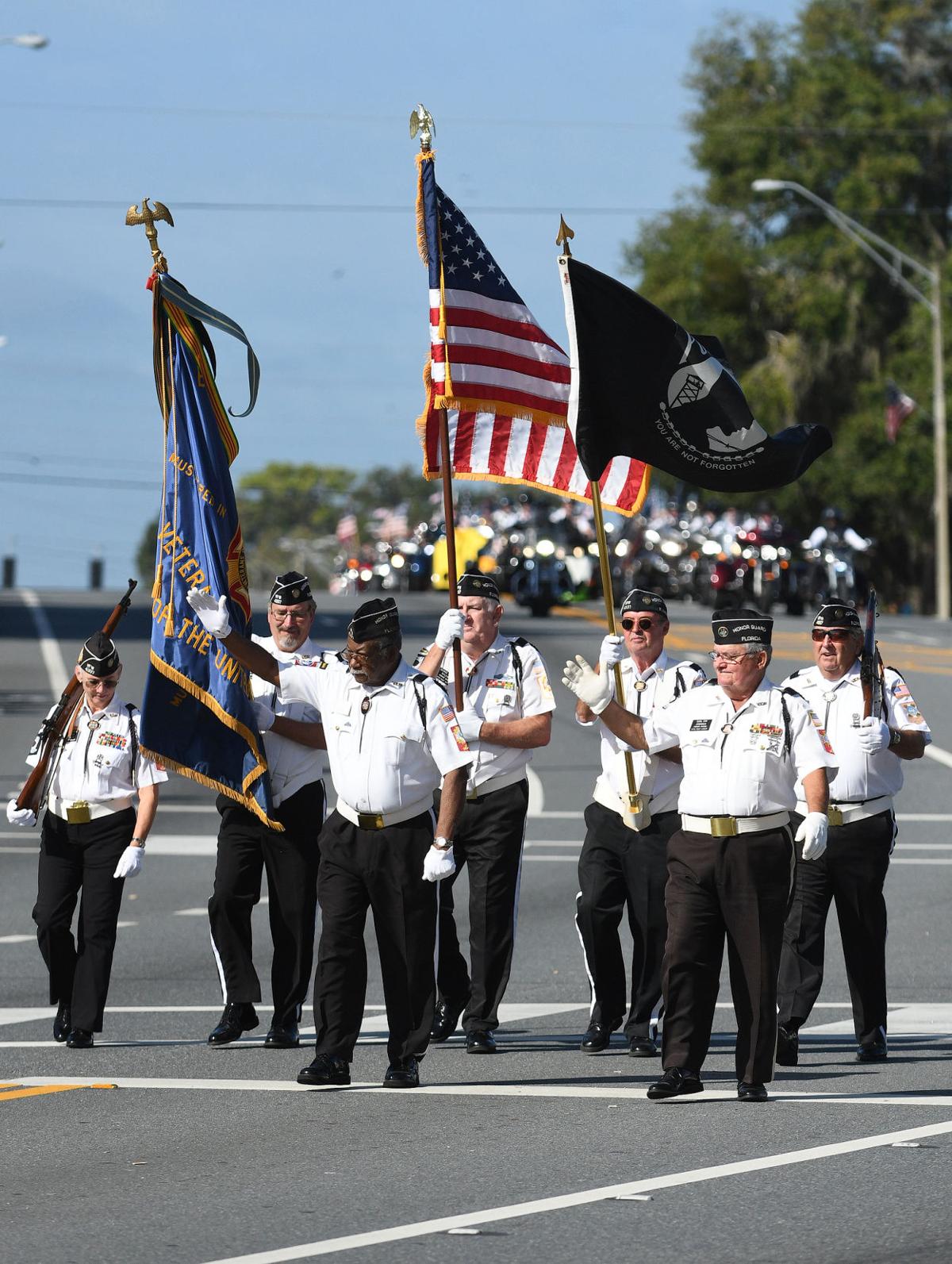 Members of  VFW Post 4337 carry the colors through downtown Inverness as the Veterans Day Parade gets started.

When Veterans of Foreign Wars Post 4337 bore the United States flag, the flag for prisoners of war, and flag of their post, veterans young and old rose to their feet and saluted.

Downtown Inverness broke into applause Monday morning in honor of the city’s Veterans Day Parade and those who had sacrificed in defense of liberty.

More than 30 organizations participated in this 26th annual Veterans Day Parade, and several thousand spectators lined Main Street and the downtown square around the Old Courthouse Heritage Museum where the parade ended and memorial began.

More than 200 people collected there to hear dignitaries and veterans pay homage to veterans who served in wars from World War II to more recent conflicts in the deserts of the Middle East.

The ceremony began at 11 a.m., a remembrance of Armistice Day and World War I, which officially ended on the 11th hour of the 11th day of the 11th month in 1918.

“That was the end of the war that was supposed to be the end of wars. It didn’t quite work out that way,” said Richard Hunt, the grand marshal for the parade and U.S. Marine Corps veteran of the Vietnam War and Purple Heart recipient.

Armistice Day became Veterans Day because “it honors the veterans who make sure that this country stays free,” he said.

“This truly is your day,” he said when he asked veterans in the audience to raise their hands.

“From private to general, all branches of service, rich, poor, educated, some maybe not so much formally (educated), all giving everything they had for this county,” he said.

“For those of us who have served, not a single day goes by without thinking of those we served with; both those who are with us and those who are not,” he said.

As for Inverness’ efforts to honor and remember veterans, Hunt described it as a “small town done right.”

"We will never forget the old ... and the very young (who served their country),” Hunt told the crowd. “We’re all in this together. We’re all family. That’s what makes Veterans Day.”

More than 1.3 million Americans have died in wars since the country's inception, beginning with the Revolutionary War.

The ceremony included an empty, draped chair upon which Citrus County Chronicle reporter Nancy Kennedy, a veteran, placed flowers and white gloves — the symbols of the unknown missing soldier.

Daniels invoked the spirit of those who “never returned from the clutches of enemies from wars past to present.”

Plaisted promised the families who lost loved ones in wars that their sacrifices would never be trivialized or forgotten.

“We honor them so strongly here,” he said.

“And we ask God to protect us,” he said. “And may God bless the United States of America.”

Winners in  the 2018 Veterans Day Parade were:

Lest they forget, several thousand people descended on the city of Inverness on Monday to honor  veterans who sacrificed for the protection of…

000YEQ6
000YHNU Glamour Salon specializes in
NOW AT OUR NEW LOCATION On Hwy 44 in
MONDAY, JUNE 1st thru WEDNESDAY, JUNE
Lunch Specials EVERYDAY Corned Beef &
VILLAGE TOYOTA NO PAYMENTS FOR UP TO 6