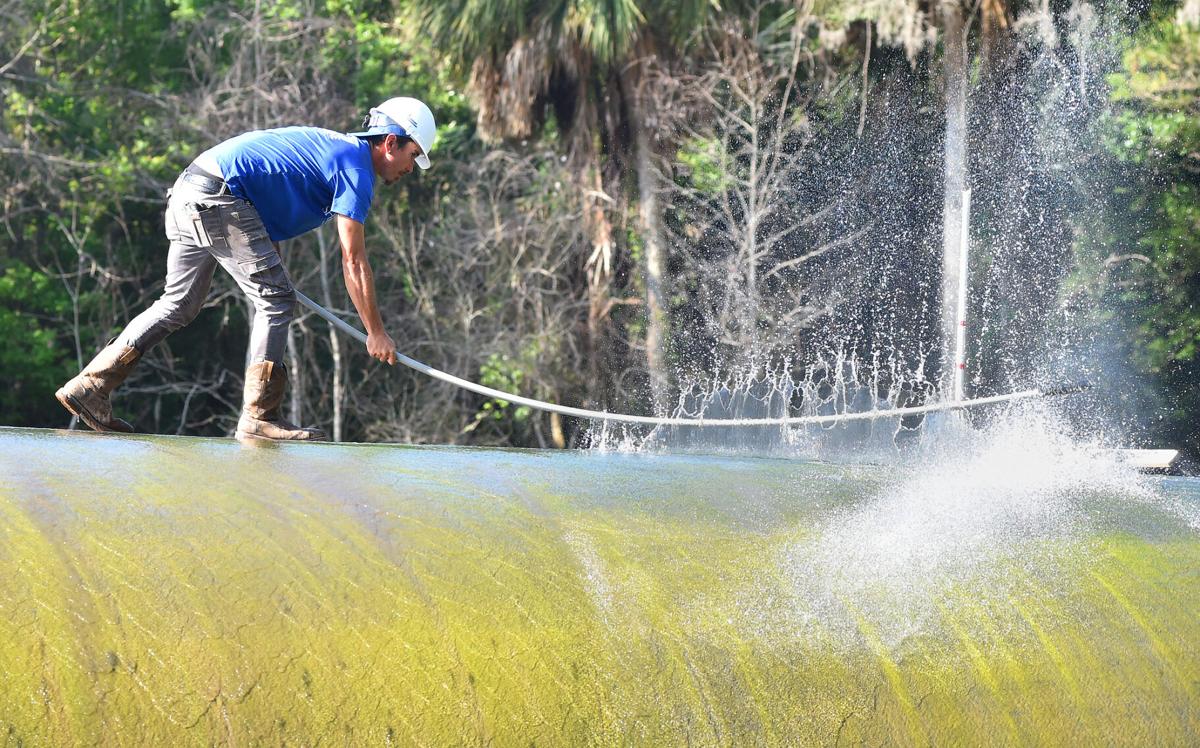 Sea & Shoreline site supervisor Travis Benavivez uses a PVC pipe to strike a water-filled bag that collects organic materials taken from the Hall's River in Homosassa. Striking the bag unclogs the porous material allowing water to escape while containing the organic materials collected from the river. The projects intends for native eelgrasses to grow and thrive. 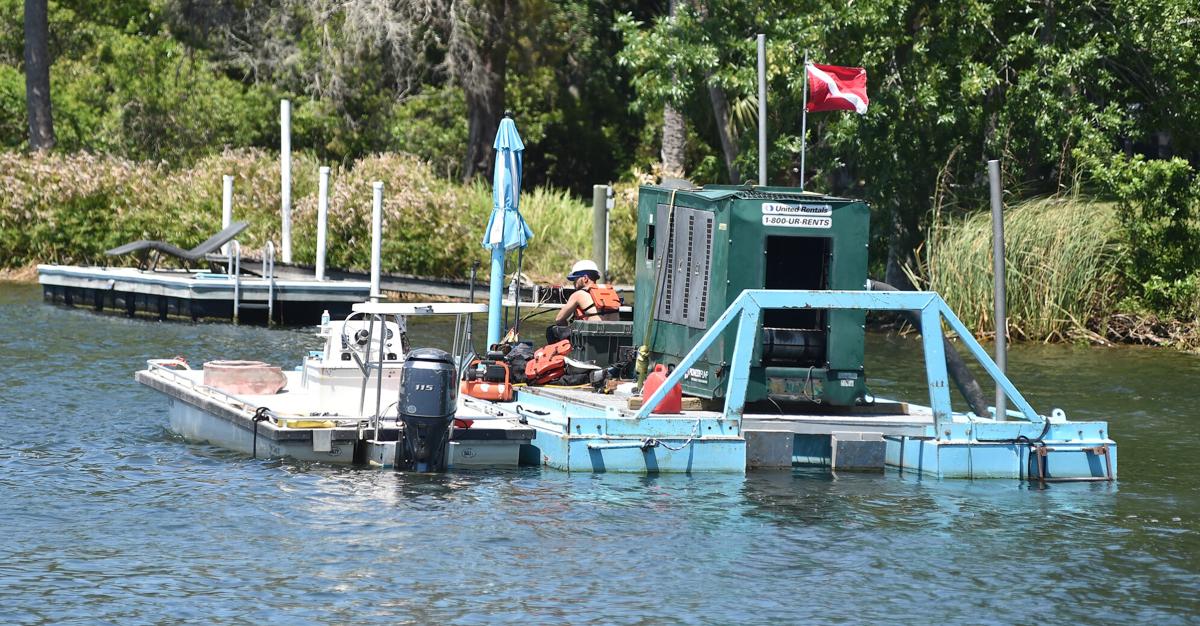 Divers work under the surface of King's Bay Thursday, April 29, as organic material is sucked from the bottom of the bay into a device that will separate the material and return the water into the bay. 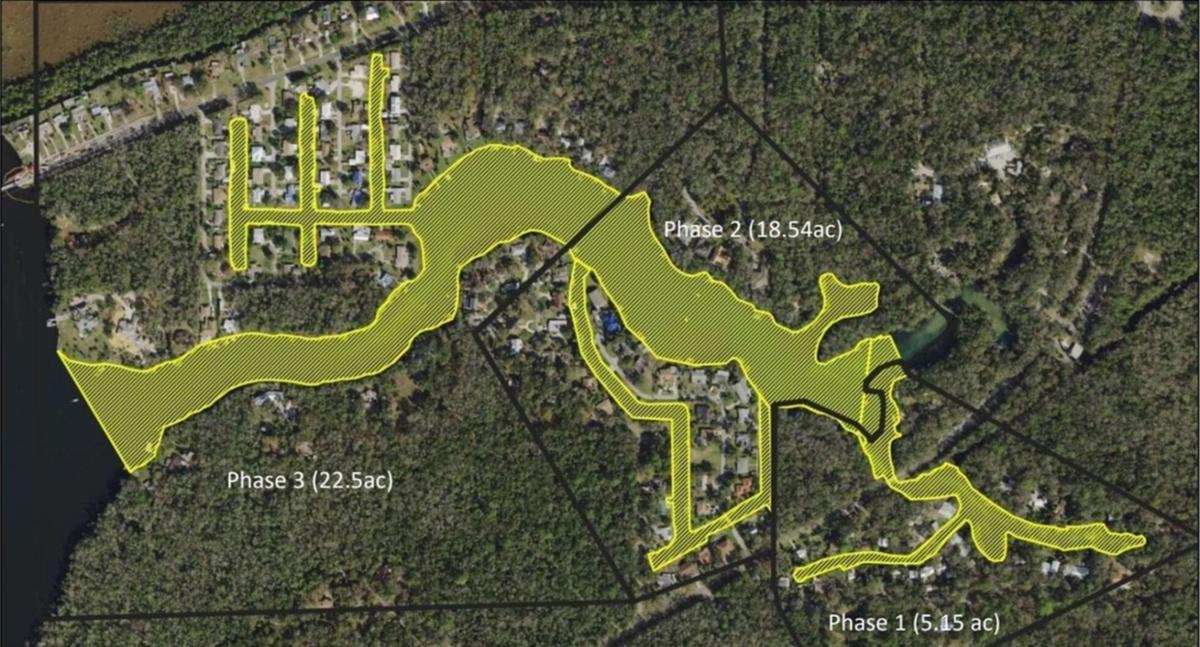 A map of the three-phased Homosassa River Restoration Project. 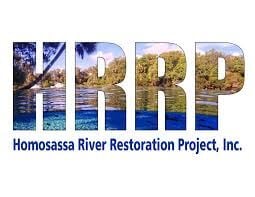 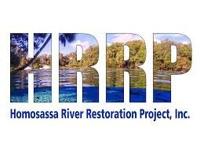 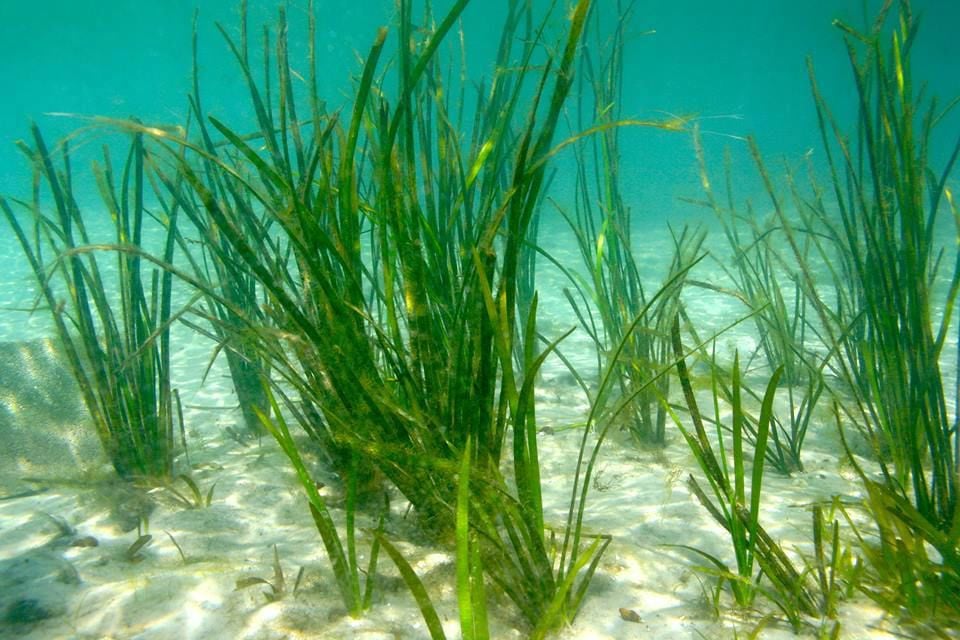 Planted "Rockstar" eelgrass on the restored bottom of King's Bay in Crystal River. 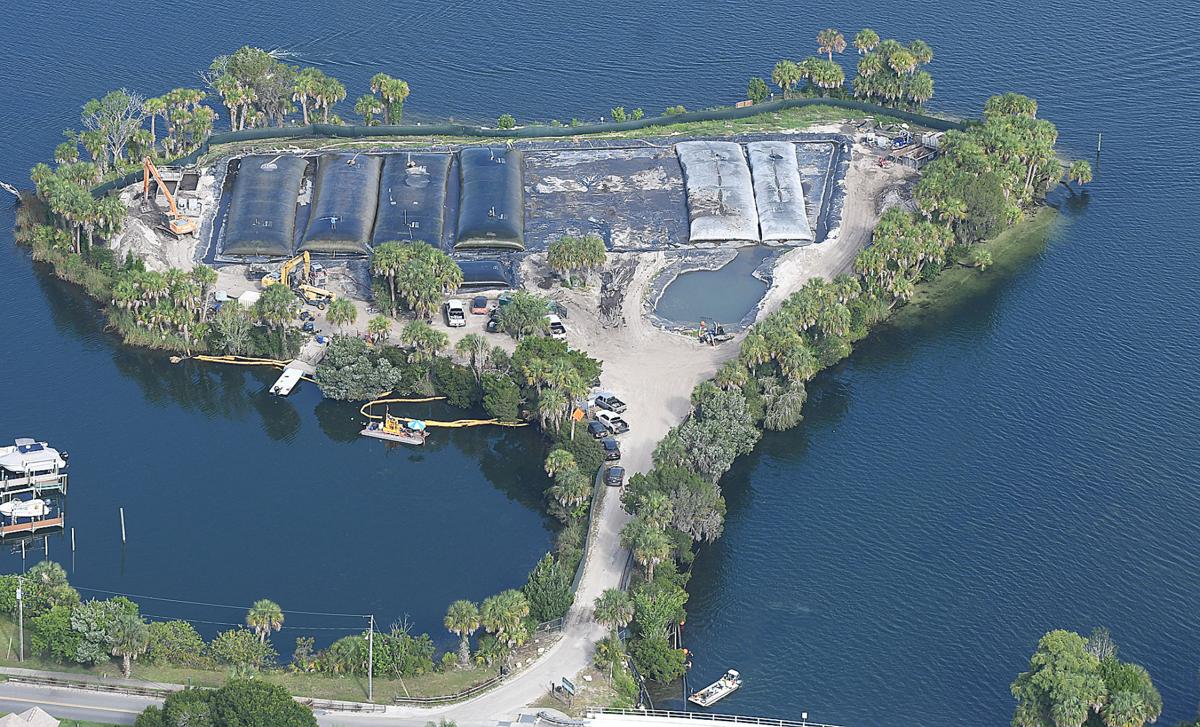 April 1 kicked off the annual and separate restoration endeavors on the Homosassa River and in King’s Bay, Crystal River.

Both cleanups were born from the respective citizen efforts of grassroot groups Save Crystal River Inc. (SCR) and the Homosassa River Restoration Project Inc. (HRRP) to vacuum dredge their local waterways of muck before replanting sandy bottoms with natural eelgrass.

Winter Garden-based contractor Sea & Shoreline, LLC and its roughly 45 workers and divers were tasked with handling operations at the two restoration sites.

Sea & Shoreline has been in charge of both environmental endeavors since their individual inceptions; 2021 is the sixth year for SCR’s project, and the second year for HRRP’s.

“We’re cranking back up again this year,” said Howard Miller, Sea & Shoreline’s vice president of sales. “We’re rocking and rolling with larger staff than we’ve had.”

Florida senators and representatives voted this legislative session in their proposed budgets to appropriate $4 million toward SCR’s upcoming phases of its King’s Bay Restoration Project.

“We’ve had good luck in the past,” Massullo said about prior and similar funding asks to the FDEP. “I don't know how much we’ll get from them; we may get more. ... It doesn’t hurt to ask.”

Representatives and senators respectively budgeted $50 million and $75 million this legislative session for the springs fund.

Joint legislative committees will form to draft a singular state budget for Gov. Ron DeSantis to review and adjust before it’s sent back to the Legislature.

Along with a $2 million grant from 2019, state lawmakers during their 2020 session allocated $1.5 million to launch the Homosassa River Restoration Project, which, has planted more than 11,000 native and sustainable seagrasses in canals east of Fishbowl Drive Bridge, Minguy said.

Minguy said he’s confident the fruits of HRRP’s labor have proven it worthy of more support to clean the river more to the west.

“I think we’ve proven it’s a viable concept and that it works,” he said. “We’re spending taxpayer dollars effectively and efficiently, and we hope Tallahassee sees that as well.”

Perfecting a method it’s used for years and hopes to expand through Florida’s coasts, Sea & Shoreline is on track to meet its yearly and ultimate deadlines.

“We’re moving nice,” Miller said, “and every year it gets a little more easier.”

Sea & Shoreline barges and divers can only do in-water work outside of the local manatee-migration season, which runs from Nov. 15 to March 31.

Moore said SCR is also applying for grants to restore Hunter Springs Cove in Crystal River, and around the city's anticipated Riverwalk.

Due to a shortened cleanup period in 2020, a portion of HRRP’s first of three phases to restore 46.19 acres in the Homosassa River by 2025 has been completed.

Similar to 2020, the King’s Bay Restoration Project is based on and around Shatz Island off of Kings Bay Drive, while the restoration of the Homosassa River is headquartered on 3 rented acres behind the Bella Oasis Hotel off U.S. 19.

From a industrial pumping system on the sites, pipes snake out toward and into the bay and river to barges or divers sucking the water bottom clean of invasive algae and vegetation.

Miller thanked Sea & Shoreline’s neighbors for accommodating its work, which sometimes goes underneath private docks or gets in the way of passing watercraft.

“People have been so gracious,” he said. “Keep an eye out for us because we’re out there.”

Whatever’s removed from the Homosassa River and King’s Bay travels back to the nearest pump site at a rate between 2,500 and 4,500 gallons a minute, and is filtered through a series of mechanical dewatering sieves to remove larger sediments.

Water’s then pumped into fine-mesh Geotube bags, after its injected with microscopic polymers used to bond onto nitrogen and phosphorus particles — fuel for algae blooms.

Once the Geotube bags reach their maximum size — a typical height of 8 feet —  clean water seeps from their tiny pores and into a lined trench flowing naturally back into the waterway, leaving the clumps of polymers and particles behind.

Afterward Sea & Shoreline plants thousands of its homegrown durable eelgrasses on the clear bottom to be maintained until they take a natural foothold to create new ecosystems.

“Because of our project,” he said, “we have the healthiest manatees anywhere.”

Miller said Sea & Shoreline has been trying to get more restoration projects along Florida's east coast, where manatees have been dying from starvation.

“We’re trying to work with the other side of the state to get some projects going,” he said, “and get some seagrass growing as quickly as we can.”