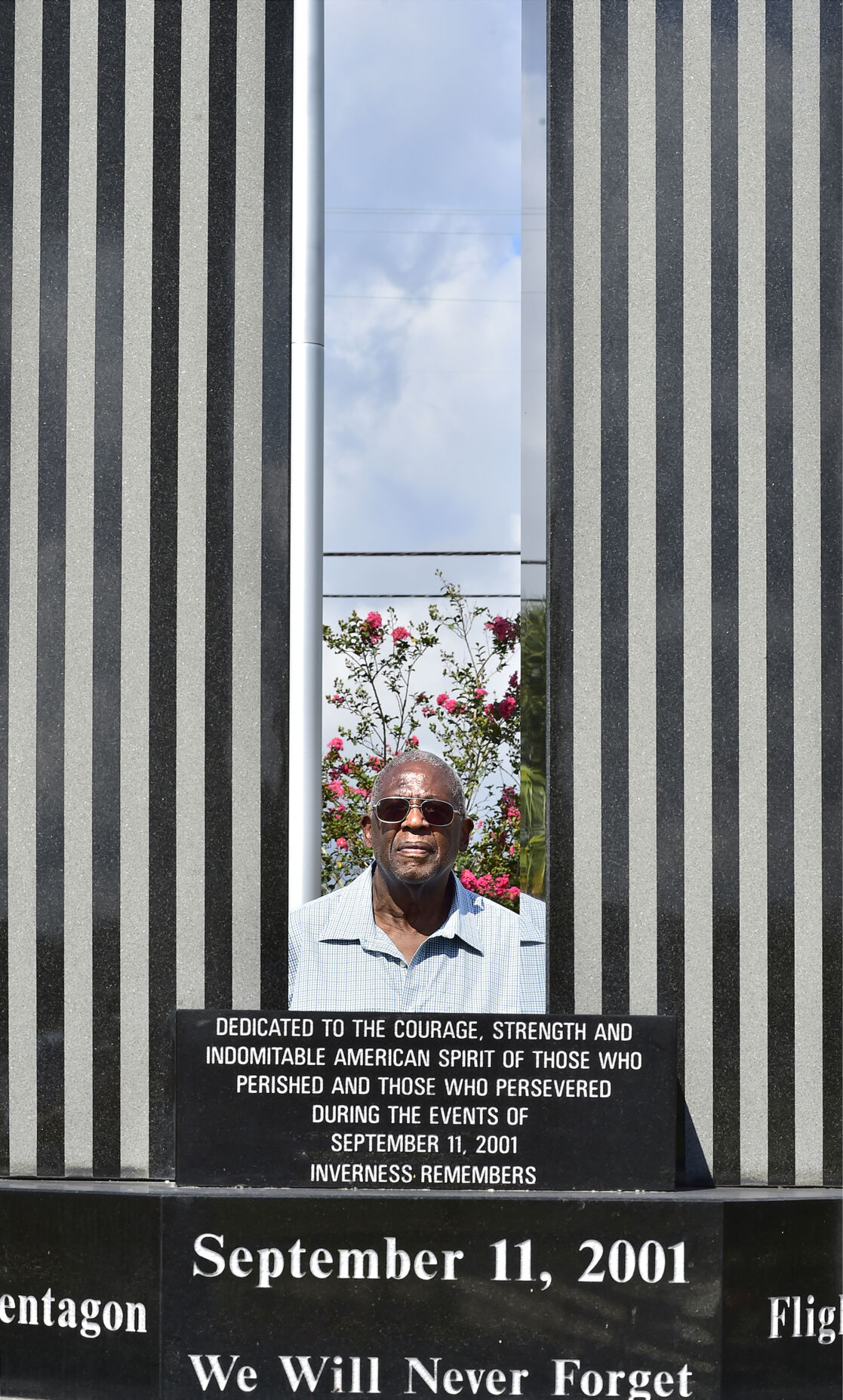 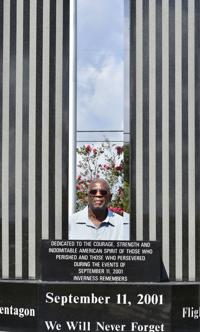 Earl Carlos worked in the 73rd floor of Tower 1 of the World Trade Center and was in the building when the building was struck by a commercial airliner. He stayed with two of his co-workers ensuring their safety as they made an escape to the street. Above, Carlos stands at the 9/11 memorial in Inverness' Liberty Park.

Earl Carlos recalls the morning of Sept. 11, 2001, when he and others in the Port Authority were impacted by terrorist attacks on the World Trade Center in New York City. The Liberty Park 9/11 Memorial stands behind Carlos.

Earl Carlos worked in the 73rd floor of Tower 1 of the World Trade Center and was in the building when the building was struck by a commercial airliner. He stayed with two of his co-workers ensuring their safety as they made an escape to the street. Above, Carlos stands at the 9/11 memorial in Inverness' Liberty Park.

Earl Carlos recalls the morning of Sept. 11, 2001, when he and others in the Port Authority were impacted by terrorist attacks on the World Trade Center in New York City. The Liberty Park 9/11 Memorial stands behind Carlos.

As he usually did, Earl Carlos arrived at his job around 7:30 a.m.

He worked as a systems technician for the Port Authority on the 73rd floor of Tower One of the World Trade Center.

It was a beautiful fall day, a Tuesday.

“My job was to bring up the computer systems so they’ll be online when the rest of the people got to their jobs,” he said.

Carlos and some of the others had gone to the cafeteria about 10 floors down to get something for breakfast to eat at their desks while they waited for the computers to be up for the day.

“My friend was at his desk by the window and he yelled, ‘Plane!’ but the way he yelled it, it wasn’t like normal,” Carlos said. “We’d seen helicopters and small Piper Cubs flying down below us before. So, when he did that, in his voice I could tell something was wrong.

“I stood up and looked his way and I could see the plane coming at the window,” he said. “I thought, ‘That ain’t no small plane.’

“Then at the last minute, instead of coming through our window, it went up, and about two, three minutes later I heard a big BOOM! When it hit the building, the building bent over about 45 degrees, and I’m thinking it’s going to break off and we’re all going down to the ground.”

As he felt the building bend and waited for what he was sure would be the end of his 60 years on Earth, the building sprang back.

“That threw me about 10 feet across the room to the wall, and I held onto the wall and yelled out to the rest of the people that we better get out, and we started running,” he said.

At that time of the morning, shortly before 9 a.m., there were only about 10 people on his floor.

“Some of them didn’t even know what happened,” he said. “One lady said, ‘Let me go put my sandwich in the refrigerator before I go,’ so she could eat it when she got back. We didn’t know what had even happened.”

Carlos and two women took the B stairway that went from the roof to the ground floor.

“Then as we were going down, the police and firemen started coming up, and when we got to about the 65th floor the building jerked,” he said. “I thought maybe the building was settling or something and kept on going.”

At one point, they reached a water cooler and Carlos took off his tie and soaked it in the water and put it over his face because he has asthma.

“When we got down around the 35th floor, we saw water running down the steps, the sprinkler system had broken,” he said. “So we walked through the water and got to the mezzanine. When we came in that morning, there were revolving glass doors about 20-feet high and turnstiles. But when we got there, no glass, no doors, no turnstiles.

“I found out later that the fuel from the plane ran down the elevator shaft, and when it hit the bottom and hit the generators, which were hot, there was a big firebomb,” he said.

Carlos and the two women who were with him took the escalator from the mezzanine to the ground floor.

“As we got to the bottom, I looked out and saw airplane engines and bodies coming down,” he said. “We went back up the escalator and back through the water that was about ankle-deep, like a waterfall from the sprinklers. We came out of the building in back of Trinity Church on Church Street and Broadway.”

They headed toward Beekman Hospital, about two blocks away.

“We started walking and somebody yelled out, ‘The building’s coming down!’ All I could think of, it could fall left, right, north, south. I didn’t know where it would fall. So, we started running for the East River,” he said.

They ran another block toward the river and looked back to see the huge cloud of debris coming toward them.

“In less than two minutes it was on top of us, and I couldn’t even see my hand in front of my face,” Carlos said. “So, we felt along the buildings because we couldn’t see where we were walking. Cars were blowing their horns, and we kept walking.”

When they got to Beekman Hospital, someone opened the door and they were able to see just enough to get inside.

“We weren’t injured, but they gave us water and washed our eyes and gave us masks,” Carlos said.

After that, the trio decided to go to the house of one of the women on 15th Street in Manhattan, which wasn’t too far away.

Carlos lived about 50 miles away in New Jersey, and the other woman lived in Brooklyn.

“When we got to Delancey Street, we saw a crowd looking south toward the World Trade Center, and when we went to look at what they were looking at, we saw the second building coming down,” he said.

All that morning as they traveled, Carlos tried to find a way to contact his wife to tell her he was alive, but phone service was spotty at best.

When they arrived at the woman’s house, her neighbors told them what they knew from news reports and fed them deli sandwiches.

While Carlos took a shower, someone used a hand vacuum to clean his pants of dust and debris, and someone else found him an extra-large Mickey Mouse T-shirt to wear.

“I finally called my wife and she said they closed the whole city down and to stay where you are — no transit, nothing was moving,” he said. “About 2 that afternoon they announced that the trains were starting to run, also a ferry from New York to New Jersey.”

Carlos decided to take the ferry, and so did scores of other people. The lines to get on the ferry were seven to eight people deep and blocks long.

A policeman said to follow him to get on a bus to get another ferry, and just as it was Carlos’ turn to get on, the ferry captain said, “That’s it. No more.”

That’s when Carlos saw a man walking on the pier, an Army engineer with a tugboat who said he could take 10 people. By then, it was around 4 p.m.

Carlos was finally able to call his son and told him to meet him at Journal Square where the Port Authority has a bus terminal in New Jersey.

After what may have been the longest day of his life, Earl Carlos made it home by 8 p.m.

“All the neighbors were there, and after all the fuss was over, I walked over to my liquor cabinet and got a bottle of Johnnie Walker Red and a water glass and filled it halfway. I drank that down and said good night to everybody and went to sleep,” he said. “I got up the next morning and the first thing I did was go to church and tell God thanks and then I went to my doctor’s office to get checked out.”

The next day, Sept. 13, he was back to work, this time at a Port Authority building in Hoboken.

The following summer, Carlos and his wife made plans to finally build a house on the property they owned in Citrus County, and after retiring in 2004, they moved here permanently.

“I think about all the friends I lost,” he said. “There were a couple of ladies I worked with, both of them smokers. They had gone outside to smoke and were on their way up in the elevator when the plane hit and it cut the lines. They found them later in the elevator shaft.

“I think about all the Port Authority policemen that were lost,” he said. “Everybody always wants to know if it bothers me to talk about it. It doesn’t, because it’s what happened and I’m thankful I got out.”