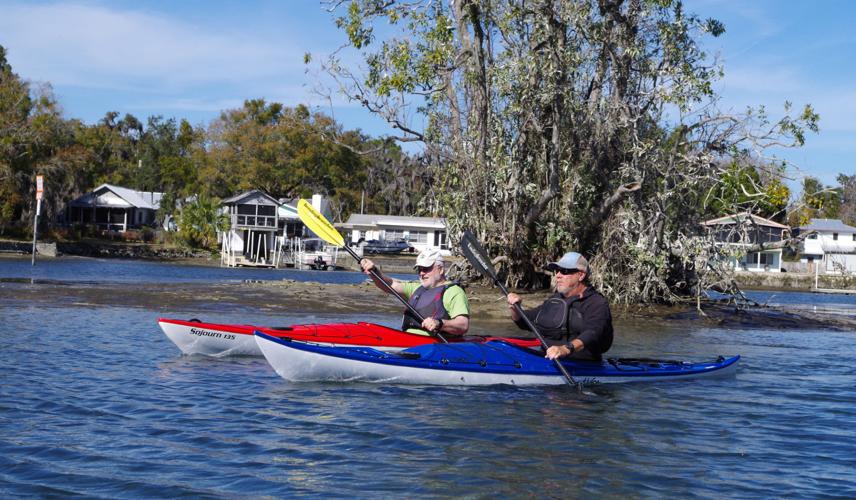 Max Schulman, left, and Matt Clemons kayak in Hunters Cove in Crystal River. Schulman and Clemons feature that location and many others in their book “Finding the Treasures of the Trails, Paddling Citrus County,” which showcases paddling trails throughout the county. 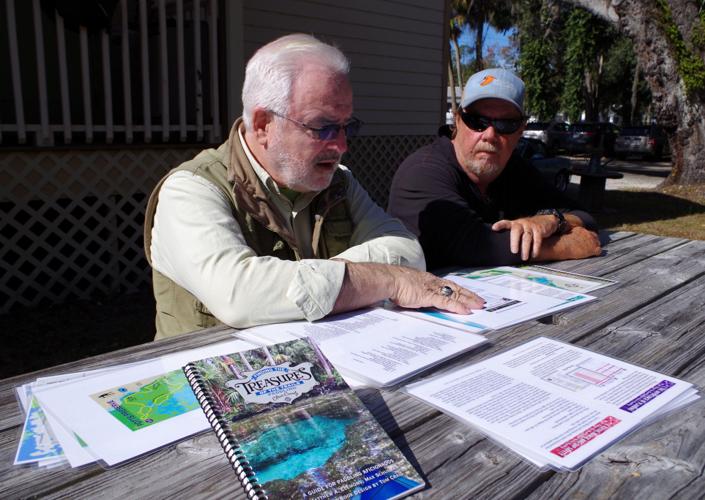 Max Schulman, left, and Matt Clemons talk about how they co-wrote their paddling guide book, which was illustrated and designed by their colleague Tom Craig.

Max Schulman, left, and Matt Clemons kayak in Hunters Cove in Crystal River. Schulman and Clemons feature that location and many others in their book “Finding the Treasures of the Trails, Paddling Citrus County,” which showcases paddling trails throughout the county.

Max Schulman, left, and Matt Clemons talk about how they co-wrote their paddling guide book, which was illustrated and designed by their colleague Tom Craig.

Experiencing what Citrus County’s diverse wildlife and scenery have to offer can be done in many ways.

Wanting to keep that experience obtainable for rookie and veteran adventurers alike, locals Max Schulman and Matt Clemons co-wrote a guide book showcasing a number of paddling trails throughout the county’s treasured waterways.

“Finding the Treasures of the Trails, Paddling Citrus County,” was published at the end of 2017, after a year’s worth of mapping, photographing, documenting and traveling 22 different water trails around the county’s coastal, river and lake systems.

“This is an accumulation of a lot of on-water experience in Citrus County, and it will be very helpful to kayakers,” Clemons said. “It’s supposed to be an overall representation of Citrus County, and get us to the point where we’re not just manatees and Three Sisters. There’s so much out here to do.”

“If you want that high-end experience…we have that in our county,” Schulman added. “The foundation has to be that people will come here for a great adventure in which they’re safe and they greatly value.”

Schulman’s and Clemons’ book, which was illustrated and designed by their colleague Tom Craig, also has another mission: to advocate for sustainable ecotourism by educating readers on bets practices for interacting with the environment.

Along with featuring Citrus County’s waters, the guide book provides readers with a checklist of equipment and safety measures, including how to draw up and submit a float plan and how to check up on weather, tides and flows.

“Part of the book that makes it different and better is the things people need to do before they go outside,” Schulman said. “It’s how do you plan the perfect kayak sortie.”

Choosing a paddle-craft such as a kayak, canoe or paddle board is not that simple.

Rushing in without knowledge to buy excursion gear, paddle craft and paddles can lead to uncomfortable, unenjoyable and even unsafe journeys, Schulman and Clemons agreed.

Clemons, who owns Aardvarks Florida Kayak Company in Crystal River, said someone either looking to buy a paddle-craft or rent one should understand beforehand what their experience is, where they’re going, how far out they’re going and who they’re going with.

“What works for one person might not work for a second person,” Clemons said.

Nothing is more important than having a lifejacket, or personal flotation device, especially one that is suitable for either offshore or nearshore trips.

“Safety is always first in my mind,” Clemons said.

Kayak shops or other groups affiliated with the American Canoe Association or British Canoeing Union offer the most reliable courses, from basic to advanced, Clemons said.

“I couldn’t believe how much you need to learn about your motor,” Schulman said, referring to oars and paddles.

Each section in the book on a particular paddling trail gives a summary of the trip and a map, detailing routes and where the appropriate launches are, along with points of interest, like restaurants, campsites and restrooms.

“We targeted working aids and planning aids that make it so a kayaker can do it safety but also do it accurately,” Schulman said.

Of course, paddlers don’t have to follow the book’s routes.

However, there are some locations that demand a more vigilant and experienced type of paddler, like the hard-to-navigate Lake Rousseau between Citrus, Marion and Levy counties — “... which is a really difficult place to paddle, it’s so worthwhile, but it’s really hard to know where you are,” Schulman said.

Schulman said three contributors shared their own way of cruising through Lake Rousseau.

“It’s important to have good maps,” he said.

Clemons and Schulman also laid out a pair of through-paddles, or multi-day excursions that pass through Citrus County, like the Withlacoochee South Paddle Trail and the Citrus County segments of the Florida Saltwater Circumnavigation Trail.

Before this book, Schulman and Craig already had one local guide book under their belt: “Finding the Treasures of the Trails, Citrus County,” which focused on area biking and hiking trails.

After their first guide book was published in December 2016, Schulman and Craig began compiling their photos and logs of their journeys on the water for a sequel.

They turned to Clemons for guidance on which coastal areas he recommended to feature.

“The coastal stuff for me is where my heart is,” Clemons said.

Clemons said he had journaled about these trails on his business’s website, and found an opportunity to expand his knowledge with Schulman’s proposition to co-write the book.

“I’ve been wanting to do it for a long time,” Clemons said. “Half of it was already written on the website.”

Schulman said Clemons was invaluable when it came to correcting what he collected along his journeys that Clemons asked him and Craig to document.

Showcasing Citrus County’s Tsala Apopka Lakes and the Withlacoochee River was another main objective for the book, said Schulman, whose had experience with those areas himself.

Schulman, Clemons and Craig also had help from a variety of private, civic and governmental contributors, which either assisted by providing GPS data, photography or expertise.

After gathering and correcting their notes, and skimming through more than 6,000 photos from Craig, the Citrus County Audubon Society, and the Nature Coast Ramblers, the book’s authors were set to publish at the end of December.

Clemons and Schulman said they’re not expecting to make money off their book. Instead, they hope to spread its message through speaking sessions at various organizations, which in turn will stock their book on finding Citrus County’s treasures.

“We’re not going to make a lot of money on this book, and it’s not about the money,” Schulman said. “I really have hopes for this book.”

“Finding the Treasures of the Trails, Paddling Citrus County” is sold at a number of locations, including Aardvarks Florida Kayak Company, located at 707 N. Citrus Ave. in Crystal River.