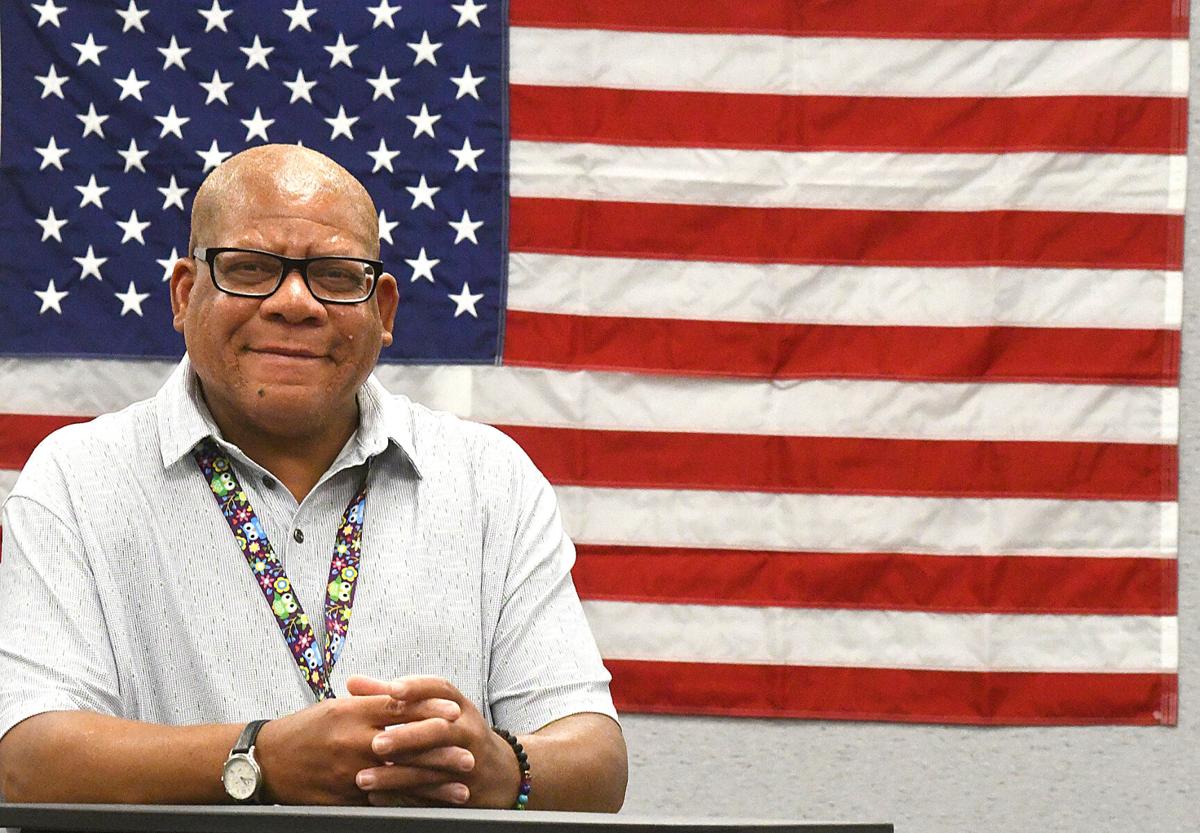 Long-time Supervisor of Voter Outreach Coordinator Patrick Thomas will be leaving his post at the elections office this week following 18 years on the job. "He was the perfect ambassador for the Citrus County Supervisor of Elections office," Susan Gill said. 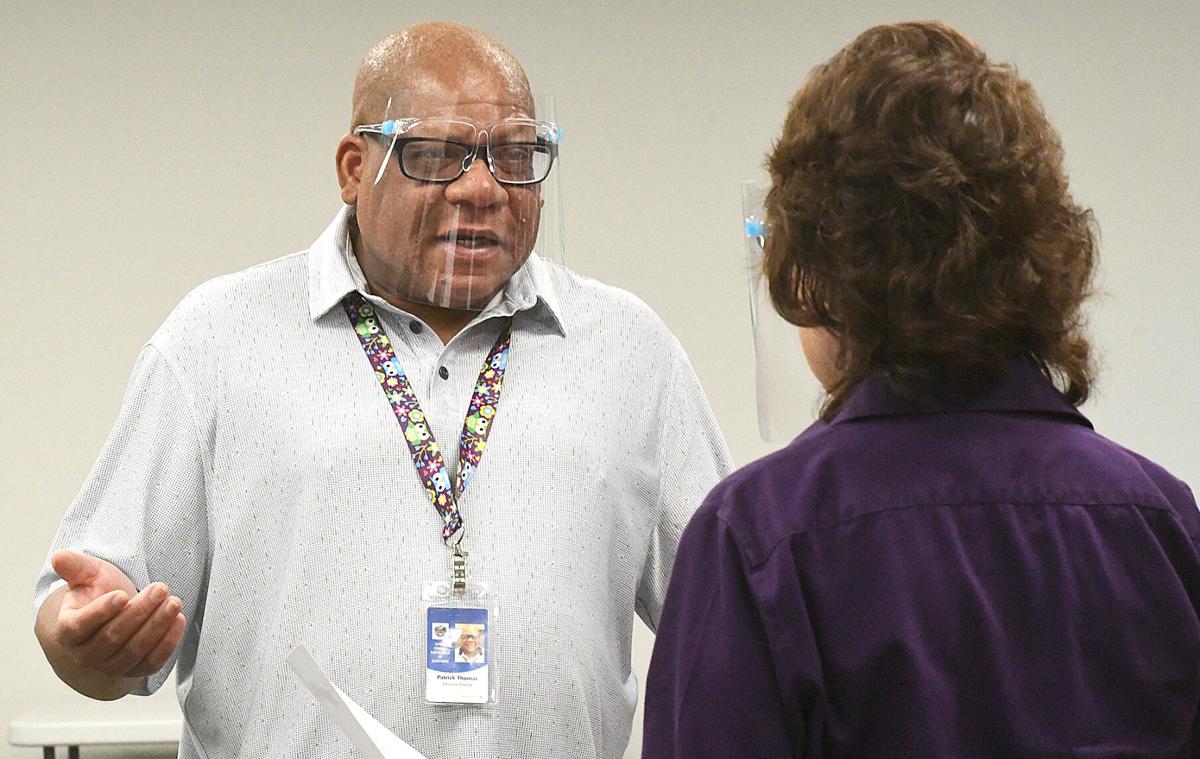 Voter Outreach Coordinator Patrick Thomas speaks Wednesday, Sept. 16, with Supervisor of Elections Susan Gill. Thomas is well known throughout the community for his work educating young and old alike about all things elections. 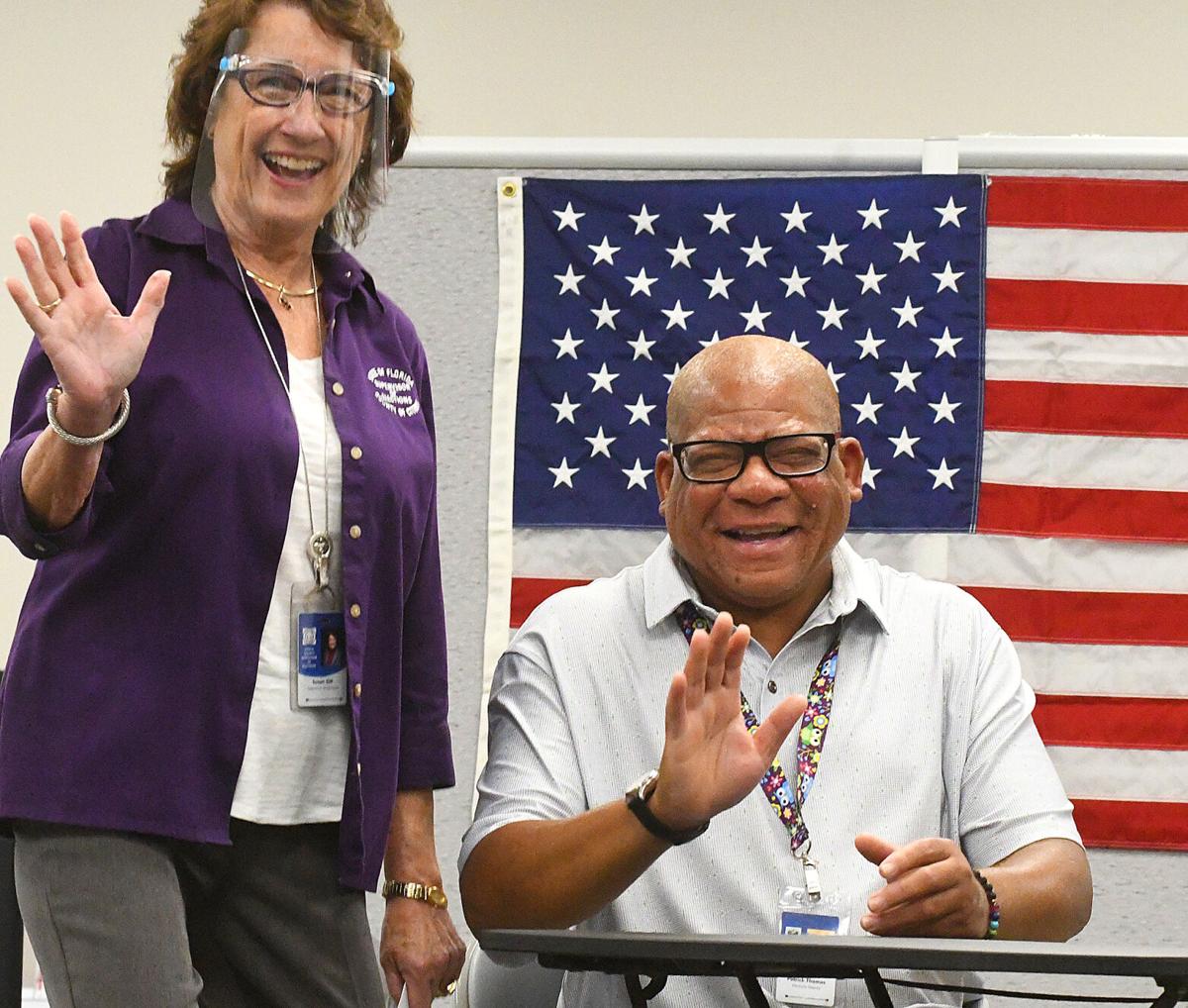 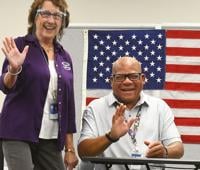 Long-time Supervisor of Voter Outreach Coordinator Patrick Thomas will be leaving his post at the elections office this week following 18 years on the job. "He was the perfect ambassador for the Citrus County Supervisor of Elections office," Susan Gill said.

Voter Outreach Coordinator Patrick Thomas speaks Wednesday, Sept. 16, with Supervisor of Elections Susan Gill. Thomas is well known throughout the community for his work educating young and old alike about all things elections.

Susan Gill is a fixture at parades.

Like most elected officials, she rides in a convertible, sitting atop the back seat, waving at crowds along the roadways.

But even the retiring supervisor of elections knows she isn’t the most popular one in the car.

“I’m sitting there waving and stuff, and people are like, ‘Hi Patrick!’” Gill said.

That would be Patrick Thomas, at the wheel of the convertible, a friendly and familiar face to an untold number of Citrus County residents.

Thomas, who has worked for Gill for 18 years — and in government employment since 1985 —  is leaving to go work for the Key Training Center in Inverness. His last day is Friday, Sept. 18.

“It’s like the heavens opened up: Here you are, answer this call,” Thomas said.

His career has included working in local government, and 10 years as an aide to Karen Thurman during part of her tenure in the state Senate and Congress.

“It’s been quite an adventure,” he said.

Thomas, 52, is a lifelong Inverness resident. Grandson of the late iconic preacher LeRoy Bellamy, Thomas grew up in Inverness and graduated from Citrus High School.

His government career actually started while at CHS. In 1985, Thomas began working with the late Clerk of Courts Walt Connors as part of a job entry program, where he was paid while also still in high school.

His task was considered high tech at the time — converting court records and blueprints to microfilm.

He worked in the basement of the Old Courthouse and, when the clerk’s office moved to the New Courthouse, Thomas went with the move.

“We moved across the street, but we were still in the basement,” he said.

One day he ran into Thurman, who at the time was a state senator. Thurman, a Dunnellon Democrat, invited Thomas to join his staff as a constituent liaison, a job he kept even after she was elected to the U.S. House of Representatives.

“That was awesome. I’m glad I did that,” Thomas said. “That was an experience and education you just don’t get. It was constantly interacting with different people on different levels. Every day was something new. There was always something going on.”

When Thurman lost her re-election attempt in 2002, Gill had been in office for two years and Thomas was interested in staying involved in the election process.

He said political allegiances — Gill is a Republican, Thomas a Democrat — never came up.

“Talk about being apolitical to the nth degree, that’s Susan,” Thomas said.

Thomas became involved in voter outreach. He was a staple representing the elections office at county festivals, and he and Gill both visited schools to register young voters.

“The outreach part is what I’ll miss the most,” he said. “Seeing certain people at certain events. I see people at the Strawberry Festival I don’t see at other times of the year.”

But for an outgoing person like Thomas, restrictions and cancelations brought by COVID-19 has made it difficult.

“All the candidate forums we did, we couldn’t do it anymore,” he said. “Everything was Zoom. That’s just not the way I like to do things.”

Plus, the elections office moved from downtown Inverness to Meadowcrest, and Gill said this is her last term. The timing was there to move on.

Gill said Thomas will be missed.

“Everybody knows Patrick and everybody loves Patrick,” she said. “We’ve worked together for 18 years. It’s just been a joy.”

Thomas is also grateful for the experience.

“I wish only the best for the election office,” he said, “but they’ll have to do it without me.”

Elections Supervisor Susan Gill says this term will be her last