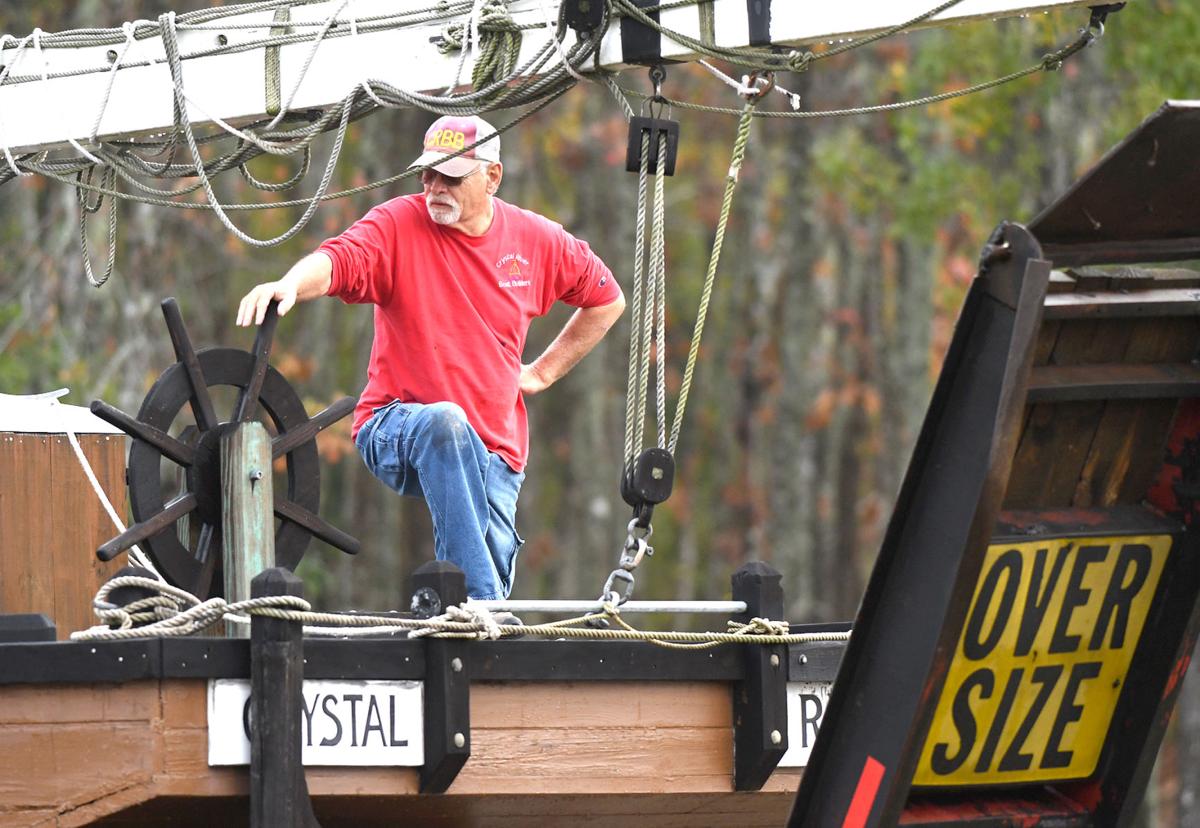 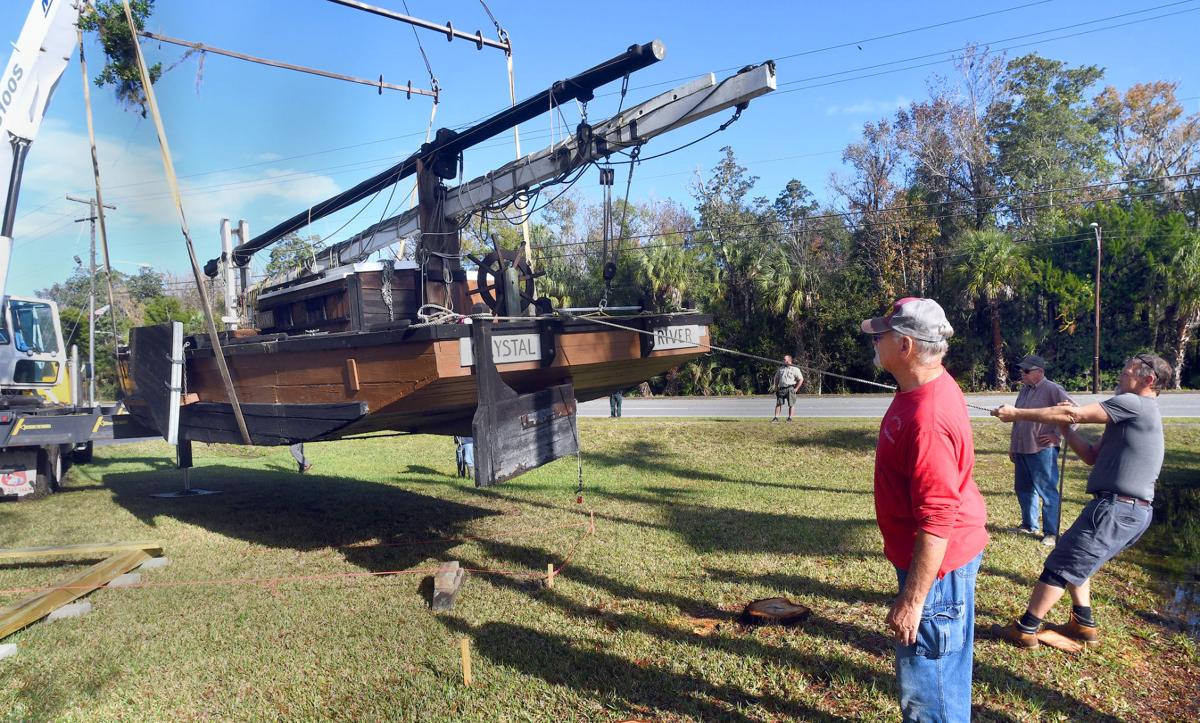 Crystal River Boat Builders president Bill Connor, in red, keeps a sharp eye on the Spirit Monday morning as it is slowly moved into position at the Best Western in Crystal River. 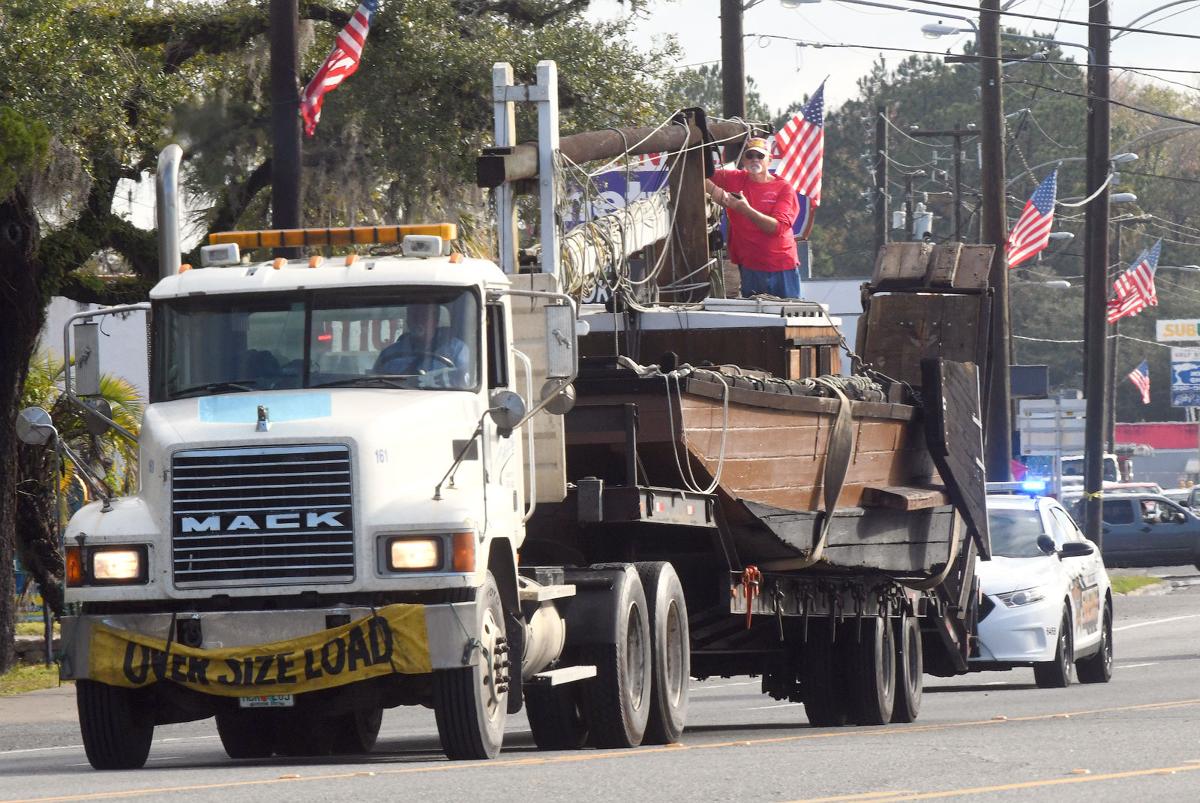 The Spirit is rolled through downtown Crystal River on U.S. 19 toward the Best Western where it will reside. 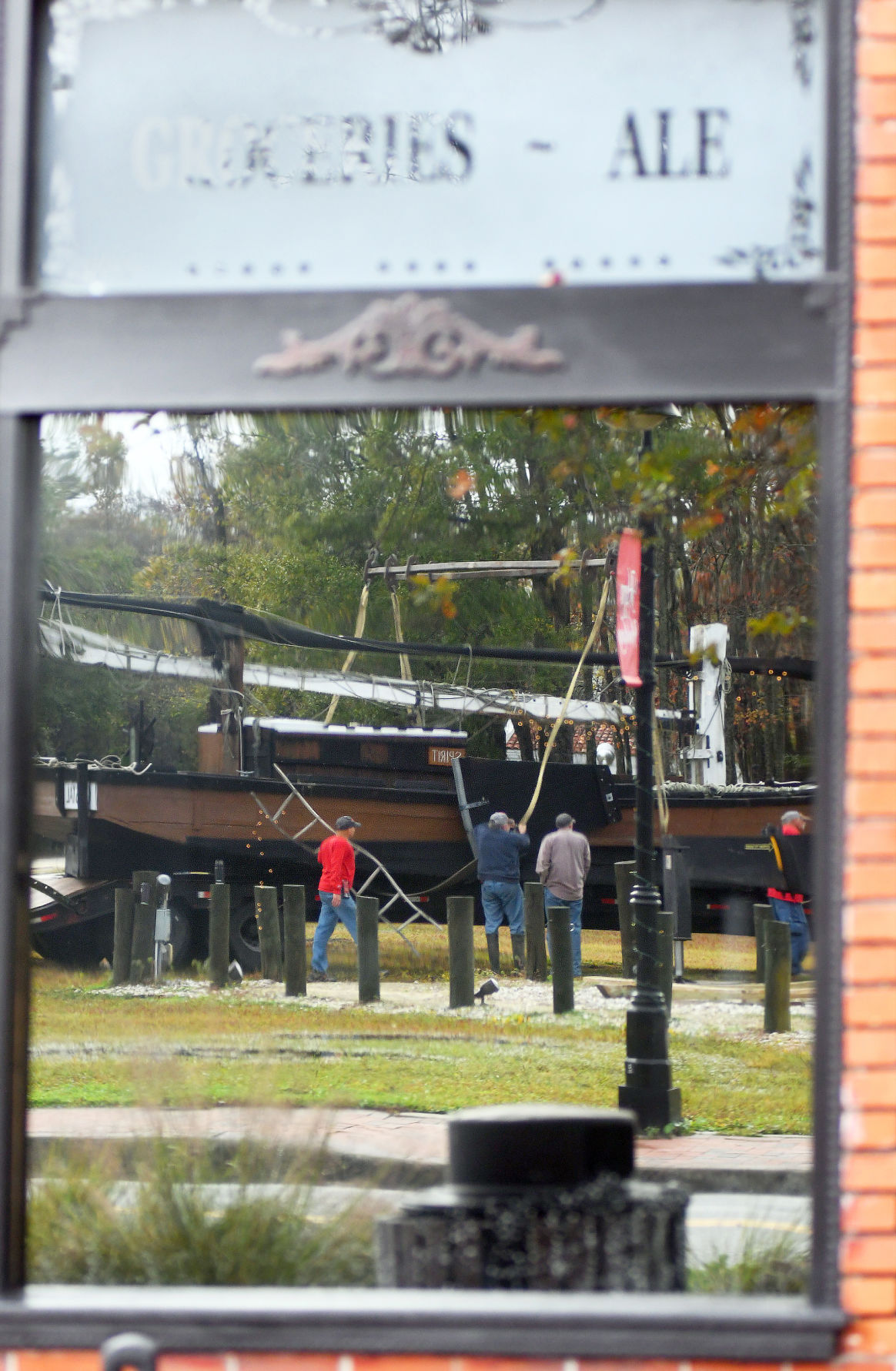 The reflection of workers preparing to move the Spirit is seen Monday morning from a window of a business in the historic downtown area of Crystal River. 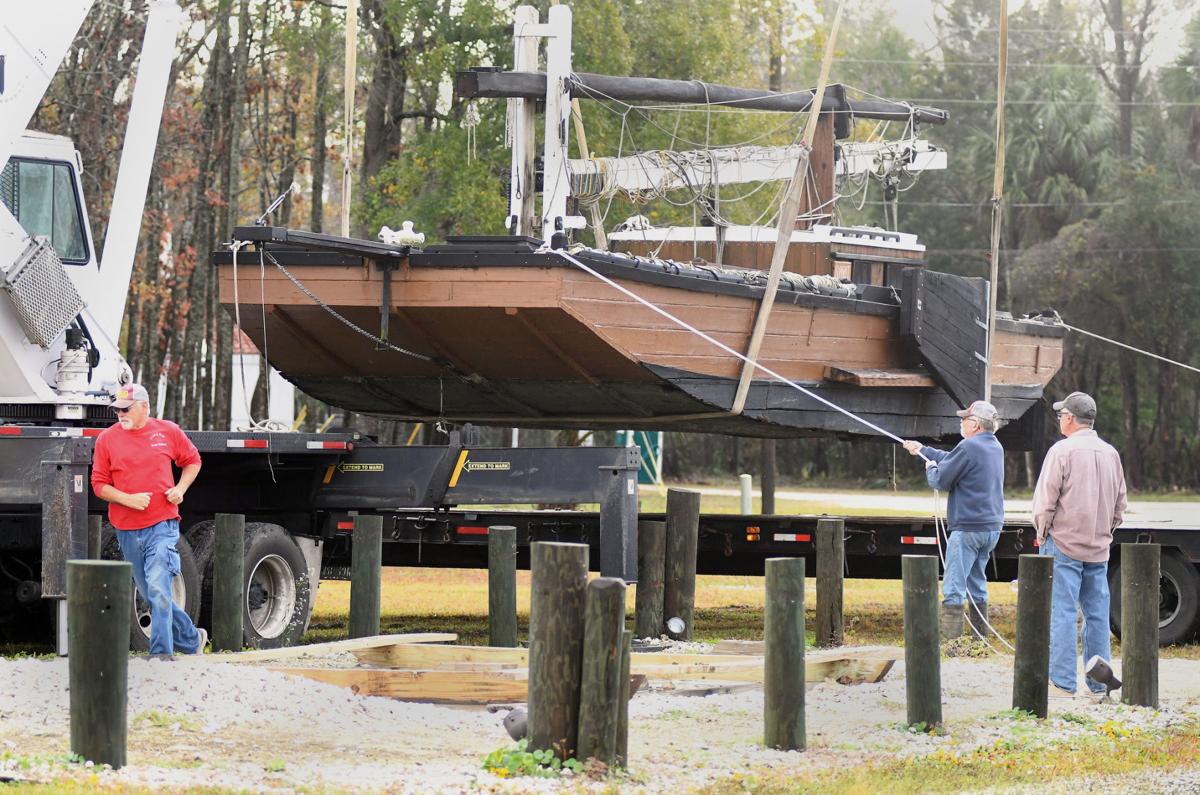 Workers use ropes to steady the Spirit Monday morning as it is lifted onto a waiting flatbed trailer for transport. 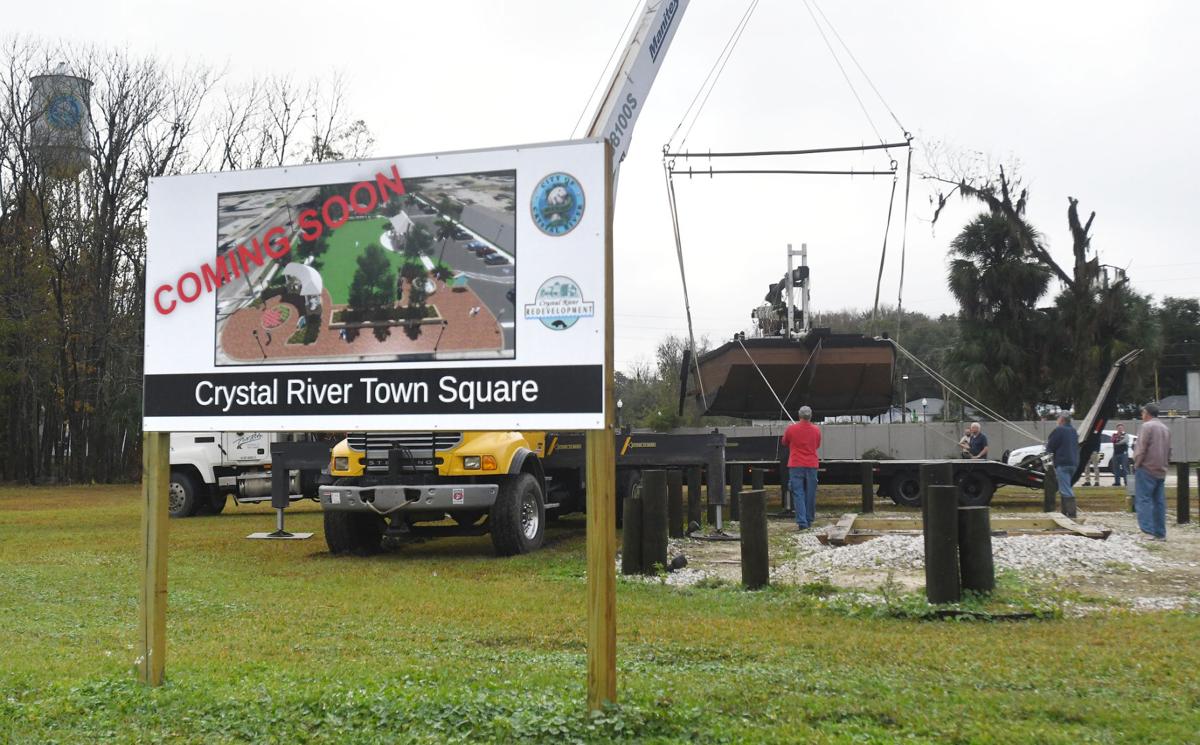 The Spirit is being moved from a location where it has resided to make way for the Crystal River Town Square.

The flat-bed tractor trailer became stuck in the mud Monday after the Spirit was loaded on. A front-end loader was used to pull the rig from the mud.

Crystal River Boat Builders president Bill Connor, in red, keeps a sharp eye on the Spirit Monday morning as it is slowly moved into position at the Best Western in Crystal River.

The Spirit is being moved from a location where it has resided to make way for the Crystal River Town Square.

The flat-bed tractor trailer became stuck in the mud Monday after the Spirit was loaded on. A front-end loader was used to pull the rig from the mud.

The Spirit was willing but the flatbed trailer — not so much.

The 40-foot boat that’s been sitting on the corner of U.S. 19 and Citrus Avenue since 2015 was scheduled to make what is probably its final voyage Monday morning.

Not by sea, but by trailer.

Work crews assembled at the corner around 8 a.m. and, via crane, hauled the Civil War-era sailing scow reproduction onto a trailer. That went smoothly. But given the soaked ground, the trailer got stuck in the grass and it required help from the city’s front-end loader to tow it out.

But it worked and the rest of the move was problem-free.

With a police escort, the crews transported the Spirit on its 0.5-mile trek just five minutes north to its new berth at the Best Western Crystal River Resort.

From start to finish, the entire move took about two-and-a-half hours.

“The Spirit has landed,” said Danielle Damato Doty, executive director of Crystal River Main Street, as she watched it touch down at the Best Western site fronting U.S. 19.

“I think it’s been just a great magnet for downtown for the years it’s been there,” Doty said. “The Best Western is a great alternative. (Not) only does it get to stay in the city but it will serve as a visual impact when you’re coming into the city from the north.”

Crystal River Main Street paid $450 for the crane and Pave-Rite out of Lecanto donated use of the trailer.

Dr. Paresh Desai bought the Best Western last October and, after talking with the Crystal River Boat Builders, agreed to have the Spirit displayed on his property.

Desai said it fits in with the fishing village motif the city wants to foster. And he did it as a gesture to the memory of his good friend Bob Mercer, who took the lead as Crystal River Main Street volunteer in relocating the Spirit from King’s Bay to Citrus Avenue.

“I thought the Best Western would be the best spot for this boat,” he said. “(The Spirit) now has a permanent home.”

The relocation was necessary to make room for the city’s new town square park on the southeast corner of U.S. 19 and South Citrus Avenue. Construction is expected to start early in January and should take six months.

When completed, the town center will feature a fountain, raised planter and seawall, flagpole, covered shade structures and a trolley stop, all surrounding an event lawn.

Meanwhile, a few tourists gathered along Citrus Avenue Monday morning got an unexpected diversion from their itinerary.

“This is right up my alley,” said Andre Arnoldi, visiting from Arkansas and a lover of boats and all things nautical.

Except for the trailer getting stuck, the lifting of the boat from its Citrus Avenue perch and getting it securely on-board was masterfully accomplished, Arnoldi said.

“They made it look easy,” he said.

Mike Lewis of California, in town with his RV, has visited Crystal River before and enjoyed seeing the Spirit at its downtown dock.

“I’m sorry they’re moving it,” Lewis said. “It was a bit of history and what this town is all about.”

Not everyone was happy to see the Spirit moved from its Citrus Avenue site.

“I think it should stay there,” said Shannon Simmons of Homosassa.

Simmons thought the city could have found a spot for it somewhere on the property of the new town square park.

Steve Kingery, member of the Crystal River Boat Builders, helped coordinate Monday’s move. He said the boat is a visible reminder of Crystal River’s heritage and connection to the water.

“It’s kind of been a little bit of a landmark,” Kingery said. “Hopefully it adds depth and it takes people back (in time),”

Phillis Mercer, whose late husband was so instrumental in getting the Spirit to Citrus Avenue, said she is disappointed the Spirit was moved off city property.

But she’s pleased Desai stepped up and allowed the vessel to stay on his property where folks can still see it. Otherwise, she feared it would have been scrapped.

“You knew you were in Crystal River when you saw the boat,” Mercer said. “It may not be the prettiest but it’s a part of our history.”

Crystal River has a builder for its town square.

It’s just a vacant field right now, with a big boat on it.

In about six months time, Crystal River’s most visible yet ever-empty corner on U.S. 19 will be filled.

Would’ve been nice to see a picture of the boat in front of BW.