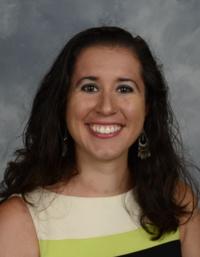 The Twitter profile for Tiana Dalichov, left, next to the Crystal River Middle School web site's photo of social studies teacher Dayanna Volitich. Volitich was removed from the classroom, the Citrus County School District announced Sunday, March 4, after it was informed of comments Volitich made on the podcast under her alias Tiana Dalichov. The Twitter account was deleted on or before March 2. 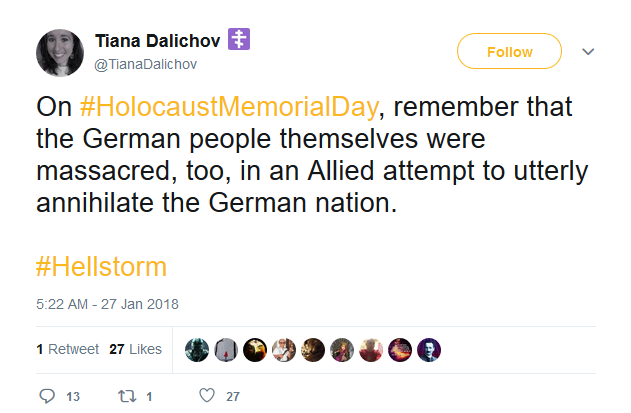 The above was tweeted on Jan. 27 by Dayanna Volitich under her alias Tiana Dalichov. Volitich said in a statement released Sunday that her writing and speech as Dalichov was satire.

The Twitter profile for Tiana Dalichov, left, next to the Crystal River Middle School web site's photo of social studies teacher Dayanna Volitich. Volitich was removed from the classroom, the Citrus County School District announced Sunday, March 4, after it was informed of comments Volitich made on the podcast under her alias Tiana Dalichov. The Twitter account was deleted on or before March 2.

The above was tweeted on Jan. 27 by Dayanna Volitich under her alias Tiana Dalichov. Volitich said in a statement released Sunday that her writing and speech as Dalichov was satire.

Crystal River Middle School social studies teacher Dayanna Volitich has been removed from the classroom as part of a Citrus County School District investigation following the revelation that she espoused racist views in a podcast and on social media under the alias Tiana Dalichov.

Her removal was announced in a statement released by the district on Sunday, which was followed by the release of a statement on her behalf in which she denied holding racist views.

"On Friday, March 2, 2018 the Citrus County School District was made aware of a concerning podcast by a Huffington Post reporter. The reporter indicated they believed one of the persons participating in the podcast was a teacher at Crystal River Middle School," the district’s statement reads. "The Human Resources department was notified and an investigation was initiated immediately. The teacher has been removed from the classroom and the investigation is ongoing. Pursuant to Florida Statute an open investigation and materials related to it are exempt from public record and cannot be discussed until the investigation is complete."

Volitich assumed the alias while hosting the podcast “Unapologetic.” The weekly podcast, which bears the tagline “Covering the topics others are too afraid to talk about," is a new venture for Volitich, having launched in February. In its pilot episode, she describes herself as a political commentator, historian, educator and says she has passion for writing, particularly novels. “I’ve also been given the nickname ‘The Twitter Slayer’ of late, for my propensity to debate people on Twitter and utterly destroy them in confrontations,” she says.

Prior to the launch of her podcast and under her alias, Volitich was a Twitter personality and contributor to a small libertarian news website based in Washington, D.C., as well as an author of multiple science-fiction books. Volitich had just shy of 1,400 followers on Twitter as of March 2. In the days since the Huffington Post contacted the school district, a Twitter account and Facebook profile for Dalichov were deleted.

Volitich did not respond Friday evening to an email request for comment by a Chronicle reporter. In a statement obtained by television station News Channel 8 on Sunday, however, she claimed her actions were satire.

“None of the statements released about my being a white nationalist or white supremacist have any truth to them, nor are my political beliefs injected into my teaching of social studies curriculum. While operating under the Russian pseudonym ‘Tiana Dalichov’ on social media and the Unapologetic Podcast, I employed political satire and exaggeration, mainly to the end of attracting listeners and followers, and generating conversation about the content discussed between myself and my guests. The views ‘Tiana Dalichov’ espouses do not pervade my professional career. As an adult, my decisions are my own, and my family has nothing whatsoever to do with my social media accounts or my podcast. From them, I humbly ask for forgiveness, as it was never my intention to cause them grief while engaging in a hobby on my personal time. All future questions about the current situation should be directed to my attorney. I cannot comment further, due to the ongoing school board investigation,” the statement reads.

However, in an episode of her podcast in which she interviews the author of a book purporting that cultures are genetic and hierarchical, Volitich seems to earnestly agree with her guest.

Speaking with Brian Hendrix, author of “The Genetic Roots of Culture: How Culture Results from Genetic Behavior” and who Volitich describes as “a friend of mine,” she agrees with the thesis put forth by Hendrix that culture is genetic — either “You build huts or cathedrals,” as Hendrix puts it.

Hendrix continues, “I don’t like racists either, even though probably in the most technical sense of the word you could probably say I’m racist because I do believe that some races of people are inferior and superior — in certain ways. I would never say black people are, you know, crap people, they’re inferior at everything, but there are certain things certain races can do better. Asians are way better at math in the aggregate than white people … and white people build cultures better than Asian people or black people … and we can view it all throughout history.”

To this Volitich responds: “I think I would align myself similarly to your sentiment there. Like, I would pretty much say, yeah, OK, if believing that certain races specialize in certain things makes me racist then I guess that’s what I am, because I do share your sentiment there. Everything you’ve said, like, meshes perfectly with what, you know, I’m kind of thinking on the inside here.”

A conversation follows regarding controversial remarks made by President Donald Trump in January in which he referred to Haiti and certain African countries using an expletive. Volitich and her guest express support for Trump’s remarks thusly:

“Outfits like CNN and MSNBC, they ran with the misinformation that Trump was saying these are (expletive) people … well — and this ties into my book well, I think, because in a sense, it is because most of those people are like that, because they can’t build a country that isn’t garbage,” Hendrix says.

“Right, and that all kind of ties back in, like you were saying, that ties back into their culture and their base behaviors. These are things that have been genetically ingrained into them for hundreds of thousands of years,” Volitich replies.

In a later episode of her podcast, Volitich interviews Lana Lektoff, a producer for and wife of the founder of Red Ice Media, described by the Southern Poverty Law Center as “an ethno-centric Swedish online news source” that regularly welcomes recognized anti-Semites and Holocaust deniers.

“We need more people on our side who would be committed to being teachers,” her guest says. “They don’t have to be vocal about their views, but get in there, be more covert, and just start taking over those places. … Children is very important, and communists always knew that. They always wanted the minds of children.”

“I am absolutely one of them, then,” Volitich replies. “As a teacher, it’s a tough place to be, you know, it’s not nearly as, you know, bloody as a battlefield, but it’s pretty darn close. Because there’s so just much animosity and so much bureaucracy surrounding you that you’re on a very steep hill, and it’s hard to make your way to the top of it when you’re virtually alone. You might be incredibly lucky to find someone that’s also, you know, in the same mindset as you, but even then, it’s still difficult.”

In the episode, Volitich says she is “getting a little bit more underhanded as to how, you know, I deal with it if students ask questions about a particular topic. I had kids asking about the government shutdown several weeks ago. I have kids that ask about North Korea and how everything’s going with that. I have kids asking about ISIS and Saudi Arabia, and all kinds of things, and they have honest questions. And I told them at the beginning of the year, I said, ‘If you have questions, I will answer you. I’m not going to give you a biased view of anything; I’ll give you the facts and you can make up your own mind. And I think that’s something a lot of teachers just don’t do anymore.”

“I’ve had a couple instances where, you know, parents were concerned,” Volitich continues. “I had one at the beginning of this year who emailed the principal over my head and basically, you know, told her ‘I’m worried that your teacher is, you know, she’s injecting political bias into her teaching,’ and the principal came to me and she was like, ‘I’m not worried. Should I be worried?’ And I’m like, ‘No.’ And she believed me, and she backed off, and I haven’t heard anything since.”

The Chronicle has requested records of those complaints, but had not received them as of Sunday evening.

“If it were the other way around with leftists,” Volitich continues, “I would be paranoid with my own kids. But at the same time I wouldn’t try to get the teacher fired, I’d just coach my own kids at home and say, ‘Listen, if this is what you’re hearing, this is the other side.”

Teacher accused of racist remarks has no record of complaints

Volitich investigation found cause for discipline