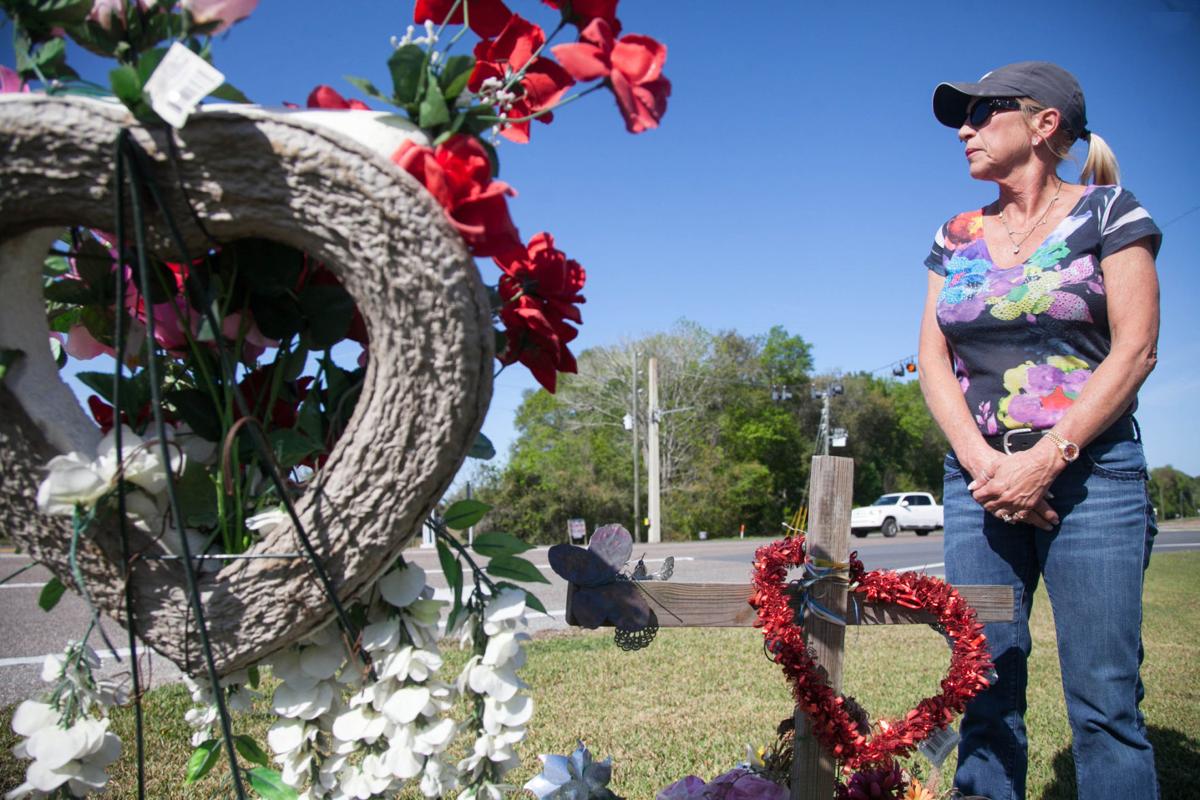 File pic: Donna Dilling, owner of Des Champs Corner Store near Brooksville, stands next to a memorial site where a fatal crash once occurred near the intersection of U.S. 98 and County Road 491, just south of Citrus County. The Florida Department of Transportation wants to put a $1.4 million traffic roundabout at the intersection. 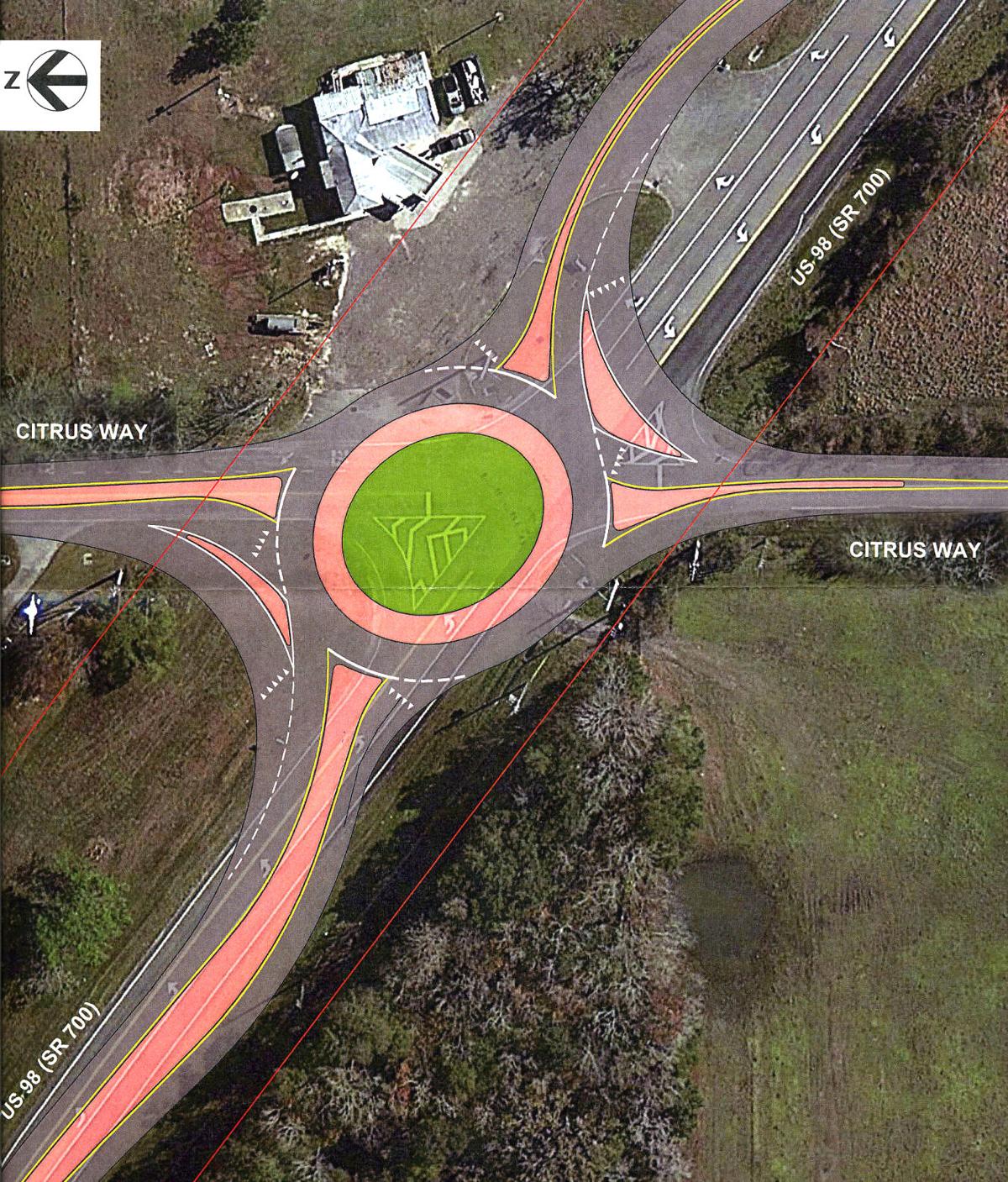 The intersection of U.S. 98 and County Road 491 has been the scene of numerous accidents. The Florida Department of Transportation plans to rework the intersection, establishing a roundabout designed to slow traffic and minimize the potential for wrecks.

File pic: Donna Dilling, owner of Des Champs Corner Store near Brooksville, stands next to a memorial site where a fatal crash once occurred near the intersection of U.S. 98 and County Road 491, just south of Citrus County. The Florida Department of Transportation wants to put a $1.4 million traffic roundabout at the intersection.

The intersection of U.S. 98 and County Road 491 has been the scene of numerous accidents. The Florida Department of Transportation plans to rework the intersection, establishing a roundabout designed to slow traffic and minimize the potential for wrecks.

Donna Dilling has had an ongoing petition on the counter of her store asking people to support a traffic light at the dangerous intersection where she is located.

DesChamps Corner is on the northeast corner of County Road 491 and U.S. 98 where car crashes and fatalities have been common. She’s gathered 1,550 signed petitions so far and is hoping that will sway the powers-that-be to stop plans to build a roundabout there and instead put up a light.

This week, Dilling got some help from the Agricultural Alliance of Citrus County (AACC), which agreed to draft a letter of support for the light and send it to the Florida Department of Transportation (FDOT).

She also got a vote of confidence from County Commissioner Jimmie T. Smith, who attended the AG alliance meeting and is convinced that a roundabout will probably not work at that intersection.

“Just put a darn red light up,” Dilling said Tuesday morning during a visit to her store. “A roundabout is not going to prevent accidents. It may prevent severe accidents, but a red light will reduce accidents.”

The AACC waded into the fray after member John Thomas spoke at length about the dangerous corner and the potential negative impact a roundabout would create for Dilling’s convenience store.

DesChamps is a favorite stopping place for truckers and is frequented by folks from Citrus County who are either headed to Hernando County for shopping or to access the Suncoast Parkway just west of the store.

Dilling said the rumble strips FDOT installed on either side of C.R. 491 leading up to U.S. 98 have helped alert drivers that a major intersection is coming up and to slow down. But it’s not 100 percent effective, she said, and the bad sight lines when they get to U.S. 98 make it difficult to judge.

Dilling’s petition has been at the store ever since FDOT proposed the roundabout about three years ago. Work on the $2.6 million traffic-calming device is scheduled to begin in 2022.

A roundabout will take out a chunk of her county-owned right of way in front of her store and reconfigure the road so that patrons will have a harder time accessing the place, she said.

“The truckers aren’t going to be able to get in here,” Dilling said.

Dilling said she is thankful of the Ag Alliance’s support.

“If we get the right people behind us, we can stop it,” she said.

FDOT officials said a roundabout is preferred over a traffic signal because it will slow speeds and the motion of traffic will move in the same direction.

Once built, there will be a flashing beacon, rumble strips, navigation signs and a gradual decrease in speed limit put in place to alert motorists the roundabout is ahead.

"Our in-house design team is currently working on plans, with the phase II plans expected this February," FDOT spokesman David Botello said. "The current concept shows the roundabout fitting within existing FDOT right of way at the intersection and there is no expectation or intent to acquire right of way from either property for this project."

We had round a bouts up north - had a lot of accidents.

Has anyone done any research on how 18 wheelers...tractor trailer trucks do on roundabouts? It seems to me that it would be difficult for them to maneuver those. There are a LOT of these trucks going through that intersection at all hours of the day and night.

This is not meant to be disrespectful to Ms. Dilling; I frequently stop in her store to or from work. I drive from Beverly Hills to Brooksville every day and pass-through this intersection ten times a week and It is unacceptably dangerous. Her quest is completely self-serving to protect the parking she has on someone else's property (State R/W). The T-Bone accidents at this intersection are horrendous. I drove by one several years ago where there were five fatalities in ONE wreck. A traffic signal will only serve to change the statistics from T-Bone fatalities to rear-end fatalities. A round-a-bout is the only solution.

Roundabouts are all over Europe and Australia and work beautifully. Roundabouts are cheaper, never fail electronically because there is no electricity involved, slow drivers down at intersections, and prevent idiots from running a red light because there is none. If a roundabout saves lives, it is worth it. If a traffic light were there, you be sitting for ridiculous, long minutes when no other traffic is anywhere to be seen. Sorry for the lady's business--she'll have to relocate to a better place on 98.

I was dead set against Round A Bouts until one was installed near my house. Traffic congestion disappeared overnight. I now drive through several regularly. I would remove all red lights and replace them with R-A-B's.

The article mentions the cost of the round-a-bout. What would be the cost of a red light?

I hate round abouts! No one yields properly. Everyone gets frustrated and becomes disrespectful. Hard for large vehicles to maneuver which then clogs everything up. Just go with a red light that everyone(I hope) understands and respects.

I agree with MIchaelRicard and crizor. We need traffic lights not roundabouts.

While FDOT is working on that they should start working on the on the other end of 491 and SR 200. Dead trap if ever there was one, mis-aligned intersection.

Yes Indeed. Both places need Lights and NOT round a bouts