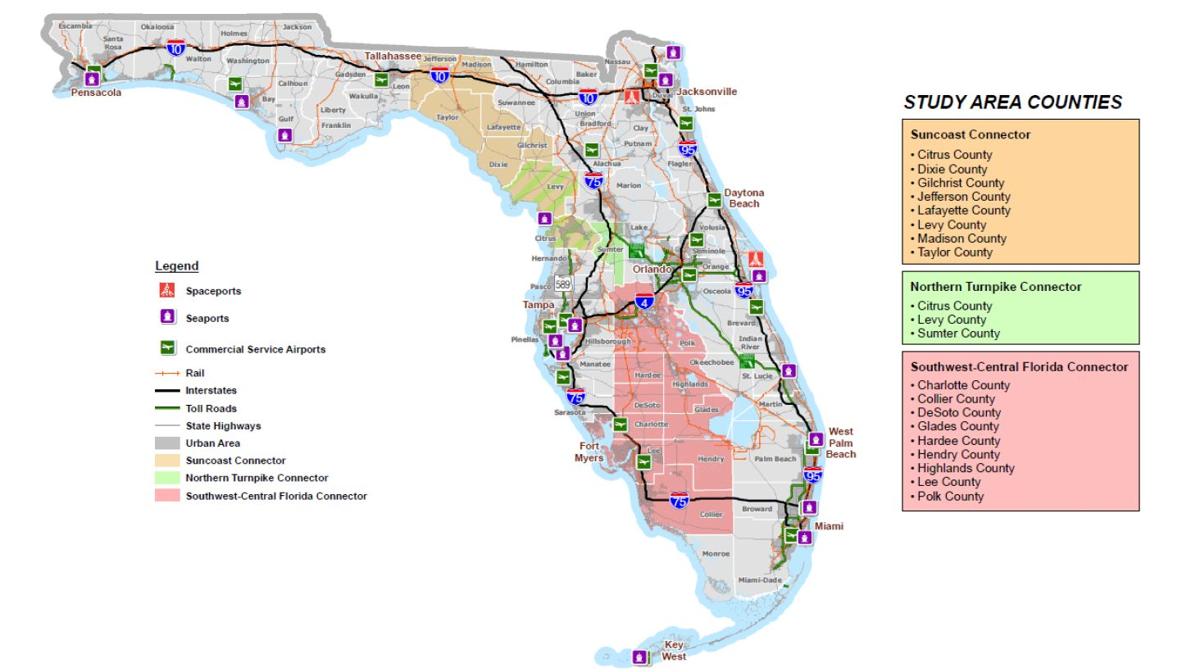 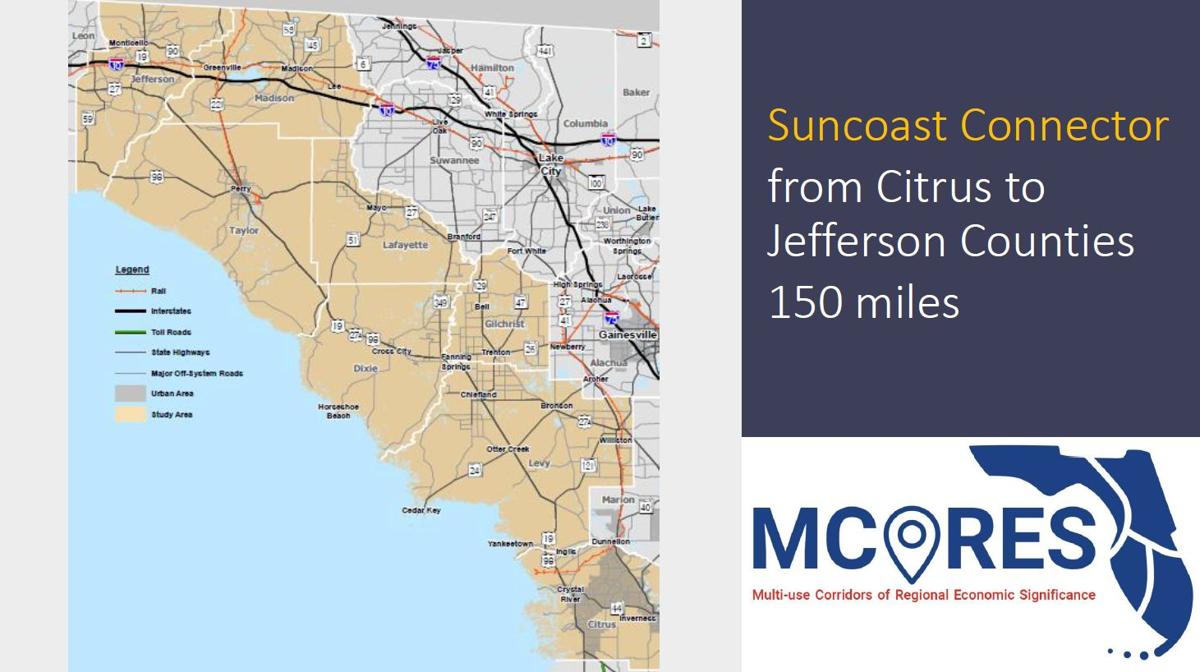 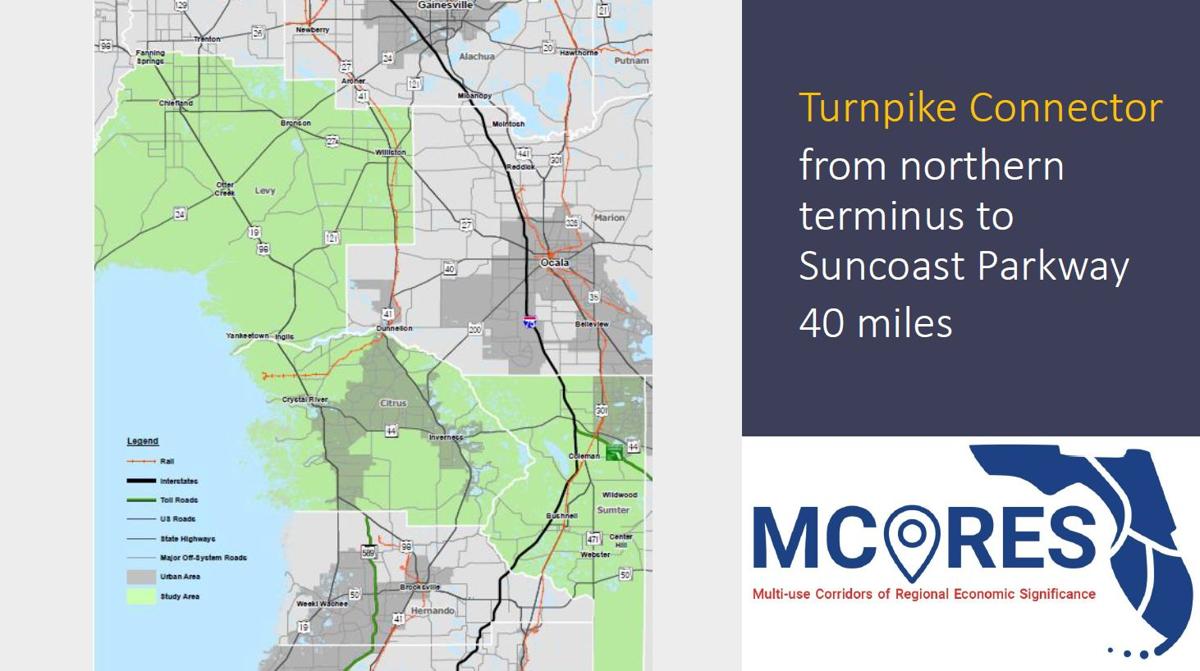 The planned study area for extending the Suncoast Parkway north from Citrus County sidesteps two counties that had raised significant opposition in having the roadway cut through their communities.

Instead, the Suncoast Parkway’s proposed extension follows a path similar to what was first envisioned for the Suncoast more than 20 years ago, according to maps provided this week by the Florida Department of Transportation.

A Powerpoint on a state procurement website doesn’t show routes, but it groups together counties involved in three projects: Suncoast Parkway extension; Florida Turnpike extension from Interstate 75 to the parkway; and the Southwest-Central Florida connector between Polk and Collier counties.

State Senate President Bill Galvano, R-Bradenton, made the road projects his top priority in the last legislative session. The Legislature passed the bill creating a task force for each project and Gov. Ron DeSantis signed it.

Unlike the so-called Coastal Corridor, which would have connected the parkway with I-75 near Gainesville, the Suncoast extension excludes Marion and Alachua counties. Local governments and citizens objected to Coastal Corridor routes and then-Gov. Rick Scott shelved the project.

This set of road projects is combined into something called Multi-Use Corridors of Regional Economic Significance, or M-CORES.

The Suncoast connection ignores I-75 altogether. It connects Citrus 140 miles north with Jefferson County on the Georgia border; the other counties in the study area are Levy, Dixie, Taylor, Lafayette, Madison and Gilchrist.

Marion is also not included in the study area to link the turnpike with the Suncoast Parkway. Those counties are Citrus, Sumter and Levy.

The state is now constructing the Suncoast Parkway between U.S. 98 and State Road 44 in Lecanto and it is scheduled for completion in 2022. Plans are then to continue it another three miles to County Road 486; however, state transportation officials have said that link may not be necessary if the road continues to U.S. 19 north of Crystal River.

Citrus County Commissioner Scott Carnahan, who has advocated moving the road northward to I-10 in North Florida, was pleased to hear the study corridor excluded Marion and Alachua counties.

However, told that the turnpike connector study area is only Citrus, Levy and Sumter, Carnahan wasn’t as supportive.

The new law requires each task force to have its final report completed by Oct. 1, 2020, with construction to start no later than Dec. 31, 2022 and corridors open to traffic eight years later.

Gov. Ron DeSantis on Friday signed a controversial measure aimed at expanding and building three toll roads on the western side of the state, …

They don’t know exactly where it’s going or how it’ll get there, but Citrus County commissioners are fully on board when it comes to extending…

The roads to somewhere start Tuesday, when a host of elected officials, agency directors and the public converge in Tampa for the kickoff of t…

No one knows yet where Florida’s Turnpike will intersect with the Suncoast Parkway, but a group began the task Tuesday of narrowing down where…