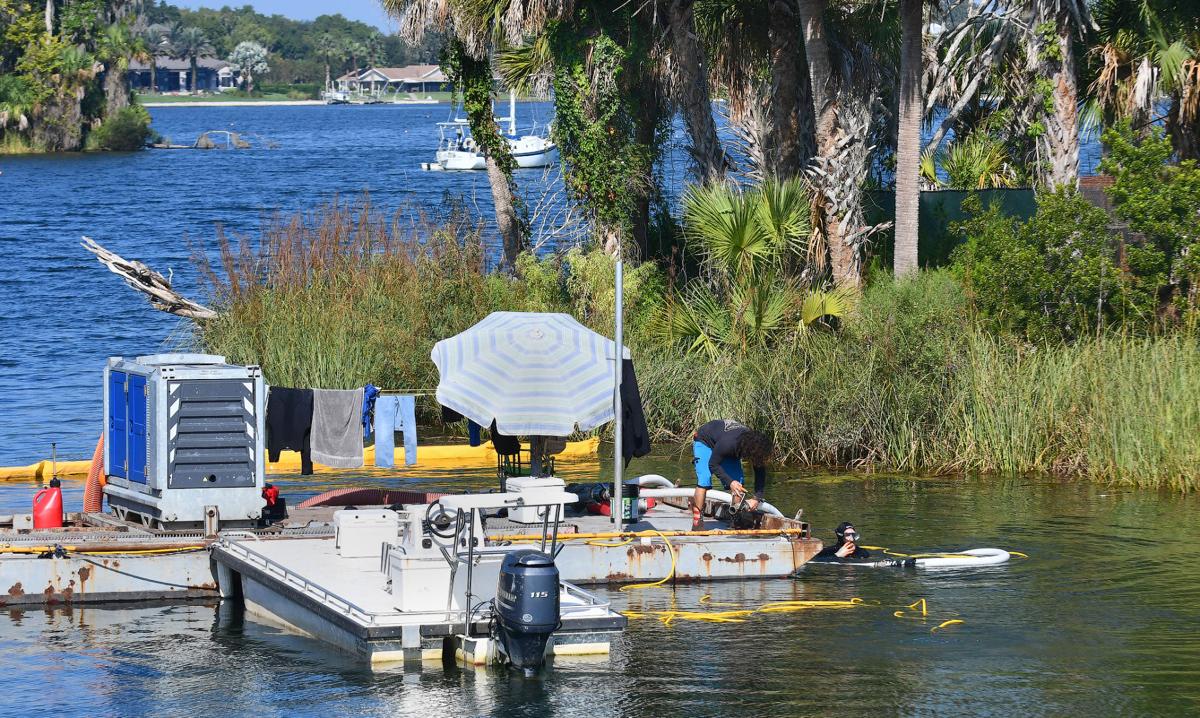 Work continues Friday morning on the Save Crystal River restoration project that is conducted by Sea & Shoreline Aquatic Restoration. Above, two divers use equipment to suck sediment from the bottom of Kings Bay next to Schatz Island. 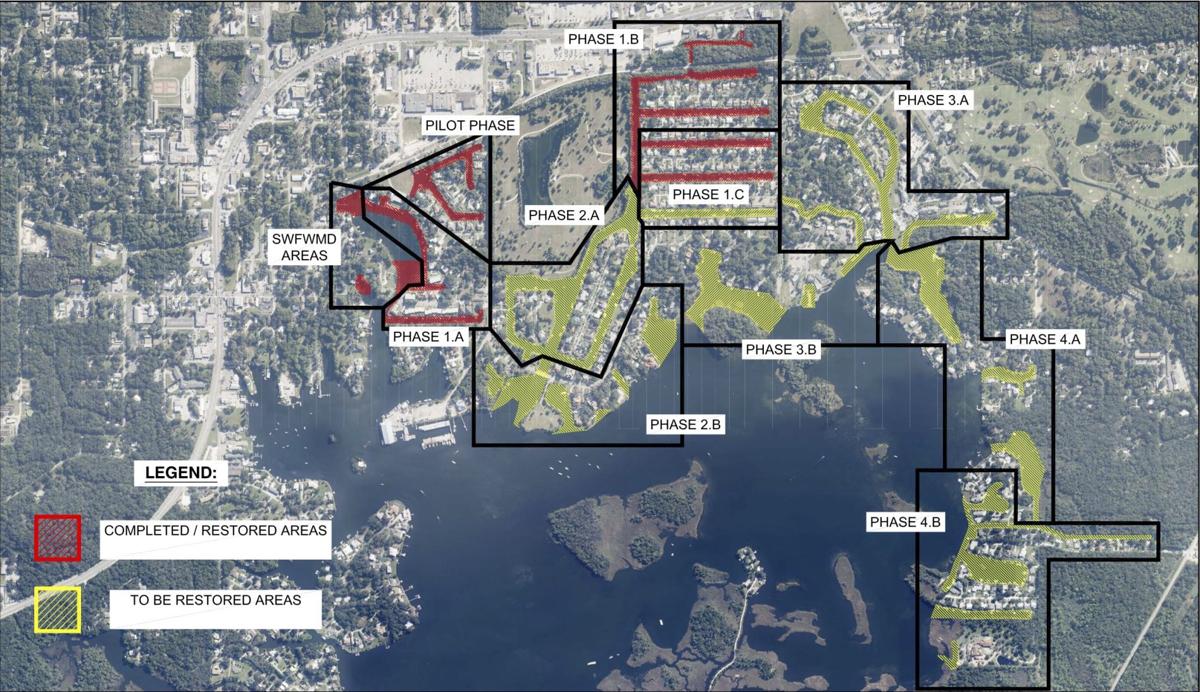 Save Crystal River’s King’s Bay Restoration Project is back in town.

Headquartered for the first time on the peninsula of Schatz Island, workers with Sea & Shoreline Aquatic Restoration began, a few weeks ago, sucking out tons of Lyngbya and other unwanted vegetation from the bottoms of nearby waters.

This is the next of several annual cleanups Save Crystal River and its contractor will keep planning to restore up to 85 acres of the bay by the city’s 100th birthday on July 2, 2023.

So far, roughly 24 acres have been cleared out and replanted, SCR President Lisa Moore said, adding the group’s on pace to reach its deadline.

“That’s our goal, that’s what we’re working towards,” she said.

After a period of public comment, the U.S. Fish & Wildlife Service (USFWS) allowed SCR to use Schatz Island — also known as Paradise Point — until 2021, saving SCR on yearly mobilization costs.

Moore said she expects the project to move one last time, to an area by the Port Paradise Hotel.

Sea & Shoreline, with design guidance from Aro Engineering, setup on the 2.27-acre lot through the rainy weeks of July and August.

“We were in knee-deep mud,” Miller said about grading out the land, moving in heavy machinery and putting up a makeshift office.

A few weeks ago, barges and divers equipped and handling vacuum-like attachments and tools traversed the centers and edges of the waterway, reaching underneath docks and avoiding wildlife.

Teams have already been clearing out the 81,457 square-foot cove right to the south of Schatz Island, where operations there are around 50% complete.

This week, workers will also start floating out inflow pipes to a residential canal in between Southeast Paradise Avenue and Southeast Kings Bay Drive, and a third location nearby, Miller said.

Permitting officials have also allowed SCR to conduct its project during the winter, when manatees migrate inshore from the Gulf, in low-manatee areas.

Along with taking out the visible gunk, pumps are also removing harmful contaminants, like nitrogen and phosphorus, which help algae grow faster.

Site Supervisor Mark Mekelburg said water visibility was six inches when he and his crews began pumping out up to 10 feet of layered muck that’s been clogging spring vents for years.

Mekelburg said they’ve “easily opened” between 30 and 50 vents in the cove alone, and the difference in water clarity and temperature have improved.

“It almost looks like a plume,” Mekelburg, a Crystal River native, said about what it’s like to reopen a doorway to groundwater. “I’ve hand-held and witnessed changing the environment.”

Vacuumed materials gets pumped through a series of dewatering device, which separates water from larger sediments, before it fills up a pair of massive Geotube dewatering bags.

A measured amount of microscopic polymers are also injected into the bags to bond to small particles of floating silt, pulling it to the bottom.

Once these 45-by-90 bags reach the peak of their capacities — up to 10 feet tall — water seeps though the bags’ finely-porous skin, filtering out the remaining pollutants before re-entering the bay at a rate of 2,000 gallons a minute.

“We’re returning water back that is so replenished,” Miller said.

Miller said between 15,000 and 16,000 cubic yards of invasive and intrusive plant life and other leftover materials have been shipped off from Schatz Island to a local farmland as fertilizer.

Schools of snook and mullet have started to return for a visit, even before Sea & Shoreline root and cage off thousands of durable eelgrasses in the new, sandy bottom.

“When the plants get in there, they’re creating the oxygen and they’re absorbing the nutrients, and that’s what’s making this project incredibly successful,” Miller said.

Moore said the open areas of King’s Bay, which are more vulnerable to outside influences, will be a true test for the eelgrasses, which are nicknamed “Rockstar” for its resilience.

Sea & Shoreline continues to maintain SCR’s first areas of restoration, where carpets of eelgrasses wave with the tide.

Crystal River City Council and the Citrus County Commission chipped in a total $335,000 to pay for three years of maintenance.

Florida lawmakers have also been behind the project, allocating roughly a total $17 million in state monies through grants and appropriations since 2015, Moore said.

Miller said that other communities want to mirror SCR’s efforts, adding that Sea & Shoreline got is working with the Homosassa River Restoration Project to start similar efforts in waters farther south.

A local nonprofit has been given the OK to use Shatz Island as a base of operations for the next few phases of its King’s Bay Restoration Project.