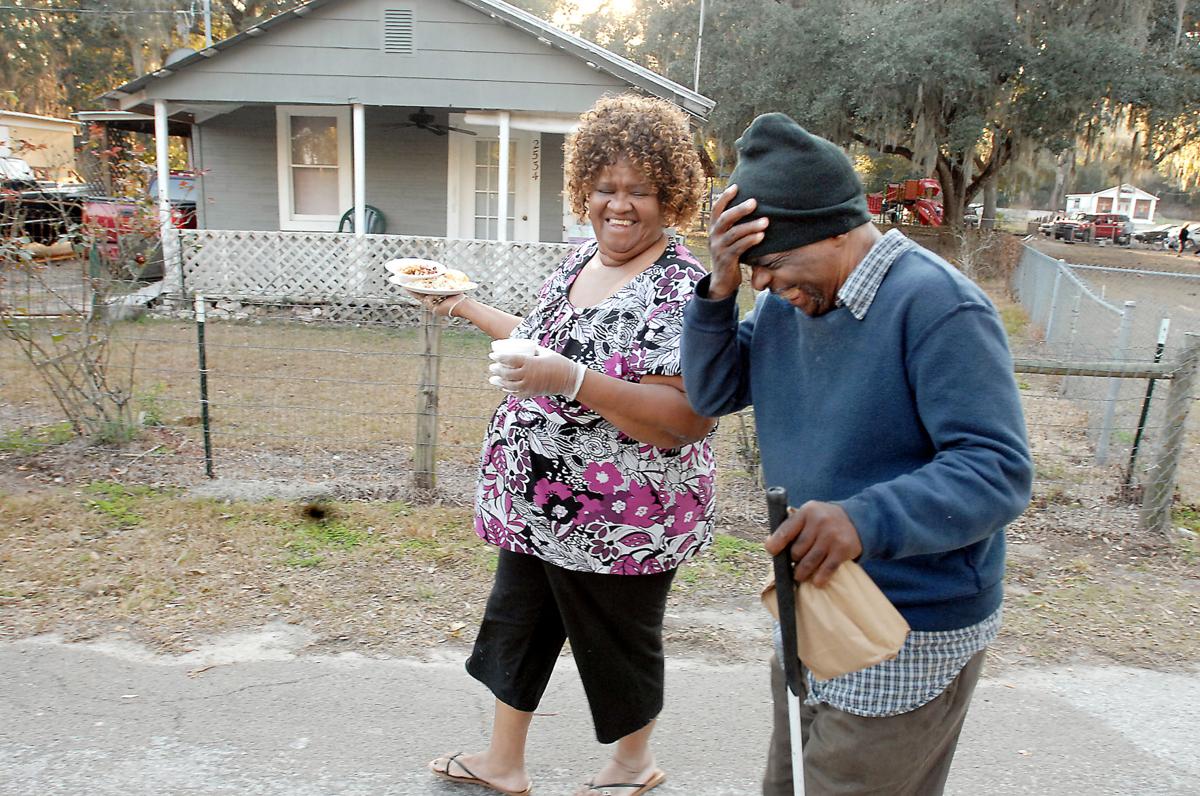 In this photo from 2009, Lynda Simmons takes Sandy Bender and a meal back to his home during the weekly Monday night dinners in Hernando Park. Simmons, who died July 23 at age 70, learned from her mother, the late Joyce Alexander, the importance of caring for others, especially feeding them. 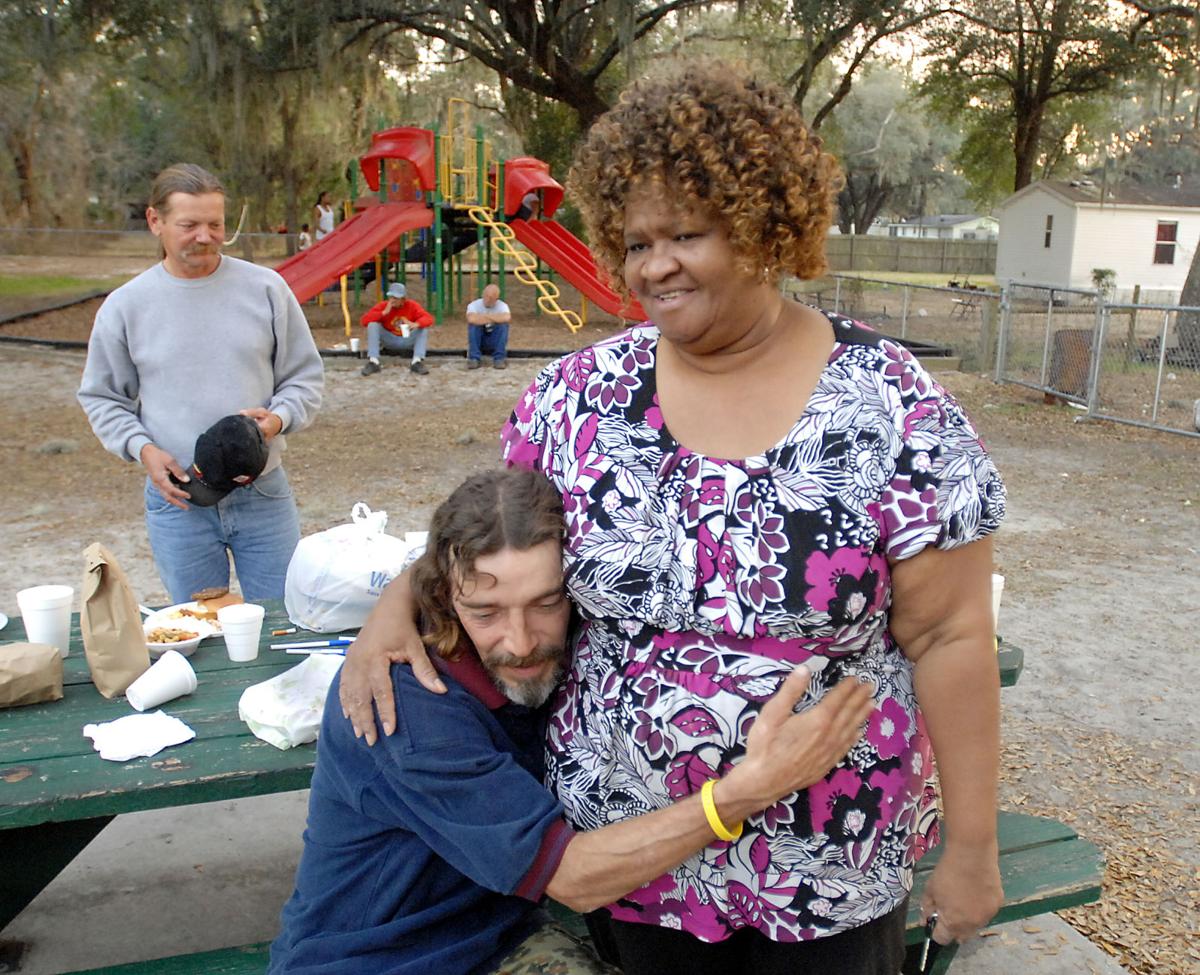 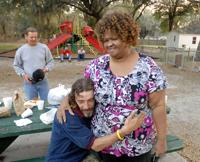 In this photo from 2009, Greg Vogtile hugs Lynda Simmons during the weekly community dinners at what is now Alexander Park. Simmons, who died July 23 at age 70, fed homeless and hungry people every Monday night for 12 years, sometimes as many as 200 people.

In this photo from 2009, Lynda Simmons takes Sandy Bender and a meal back to his home during the weekly Monday night dinners in Hernando Park. Simmons, who died July 23 at age 70, learned from her mother, the late Joyce Alexander, the importance of caring for others, especially feeding them.

In this photo from 2009, Greg Vogtile hugs Lynda Simmons during the weekly community dinners at what is now Alexander Park. Simmons, who died July 23 at age 70, fed homeless and hungry people every Monday night for 12 years, sometimes as many as 200 people.

Lynda Simmons was an angel with a serving spoon.

The second oldest of 16 siblings who grew up in the tight-knit community of Hernando, “Miss Lynda” learned from her mother that feeding people was just something you were supposed to do.

Her mother, the late Joyce Alexander, believed no one should go hungry and she always had food on the stove or in the refrigerator for anyone who knocked on the door, even strangers.

It’s said she would feed a rattlesnake if it looked hungry, and so would Lynda.

For about 12 years, every Monday at 5 p.m., rain or shine, even in the stifling heat, Lynda would set out pans of food on the tables at Alexander Park, the park named after her family, and serve meals to the homeless and hungry people who would come to eat.

They would line up in droves to eat Miss Lynda's food.

After a long illness, Mary Lynda Alexander Simmons died July 23. She was 70.

“The whole family is like that,” he said. “If they’re having a cookout, they’ll call you up and tell you to come over or flag you down and get you to eat.”

Like her mother before her, the first thing Lynda asked someone was, “Are you hungry, Baby? Can I fix you something to eat?”

In 2009, Lynda Simmons was honored with a certificate of recognition for her service to the community by the Citrus County Board of County Commissioners.

The weekly Monday night dinners in the park grew out of Lynda’s concern for the people who live deep in the woods. When her brother, the Rev. Doug Alexander, started the New Church Without Walls in 2001, Lynda and some other people started taking food into Tampa and feeding people from the streets.

After a few years, only a few people were consistently volunteering, so they decided to switch their focus to the people closer to home.

Also during that time, Lynda had started leaving food on the benches on the Withlacoochee State Trail. As people started coming out of the woods to eat it, they found their way to the park when Lynda began setting up her pans of food.

Sometimes she would pack up something special for certain people to take back to their camp in the woods, like the man who especially loved her lima beans and cornbread.

She also had another regular who would go to the store and buy food and bring it to Lynda's house to cook for him.

Lynda told the Chronicle in 2009, “It’s almost a full-time job, but I don’t do it alone. People bring me food all the time, and all I have to do is make a phone call and someone will help,” she said.

“Plus, I’m a coupon and a bargain shopper, so’s my sister, Brenda. We’re always looking for bargains, 20 pounds of rice or whatever. We never know what we’re going to have, but it’s always more than we need.”

When Simmons retired from Citrus Memorial, where she worked in administration for more than 30 years, her friends at the hospital gave her a deep fryer and huge pots as a retirement gift.

After she retired from CMH she worked as a residential aide at the Key Training Center.

“She was my sister and my very best friend,” said Brenda Thomas. “She took care of all of us, took me to my doctor’s appointments, my first dentist appointment. She was kind and warm, a sweet-hearted person.

“She taught me everything, and not just me, but everybody,” Thomas said.

Their favorite activity was shopping at Beall's Outlet on Monday night's — but only after everyone at the park was fed, Thomas said.

Lynda Simmons was part of the last group of students at the all-Black segregated Booker T. Washington School and one of the first Black students to go to Citrus High School.

It was while working at the hospital that Simmons got to know the people of the community and of the various helping agencies. She got good at hooking people up with resources, helping them fill out paperwork.

“She had wisdom, and she knew how to get things done for people — she could’ve been her own social services organization,” Thomas said.

Another sister, Pearlina Alexander, wrote on Facebook: “My oldest sister Lynda Simmons didn’t drive, but I could tell she loved her sister Pearlina. Once a week I’d get a Sprite on crushed ice delivered to my preschool. Her husband would drive her to bring me a refreshing drink because she loved me and knew how a day in my line of work could be.

“I love her and Melvin to the moon and back. That is definitely sister LOVE!”

Lynda was married to Melvin Simmons for 49 years and raised four children: Byron, Dana, Alexia and Luke, who died in 2019.

She is survived by five sisters and six brothers, many grandchildren and great-grandchildren, nieces and nephews and many, many other lives she touched with her kindness and compassion.

“A hard thing about life is death. It is a must that you appreciate the people in our paths for the time we are allowed to have with them. My first time meeting Lynda Simmons was in a hotel in Iowa when she came up to see her son Luke graduate,” said daughter-in-law Elonza Hendred.

“Lynda welcomed me into this big family, supported me, put me through anger management, prayed for me, went and picked up animals with me, listened to me, and most importantly treated me as if I was her very own.

“She was absolutely one of the best,” she said. “I was honored to be with her son and to have her in my life.”

Visitation for family and friends will be from 5 to 6 p.m., Friday, July 30, at Chas. E. Davis Funeral Home in Inverness.

A Celebration of Life Home Going Service is at 11 a.m. Saturday, July 31, at The New Church Without Walls in Lecanto with Rev. Robert Simmons, Rev. Dr. David Houston, and Bishop Dr. Douglas Alexander officiating. Burial will follow in the Hernando Community Cemetery.