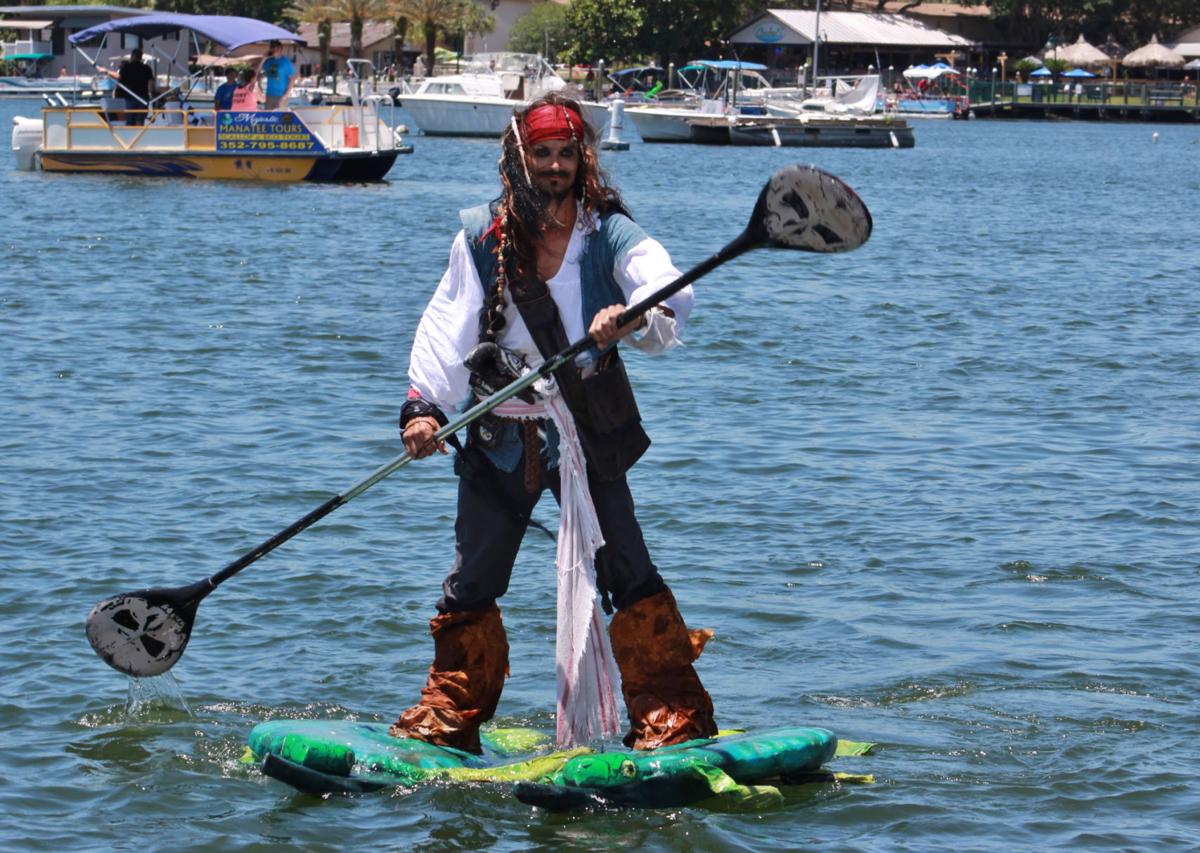 Josh Hensley rides a sea turtle paddle board in King’s Bay at the King’s Bay Pirate Fest Invasion of Citrus Avenue in Crystal River in May, 2016. Hensley died this past weekend. He was 43. 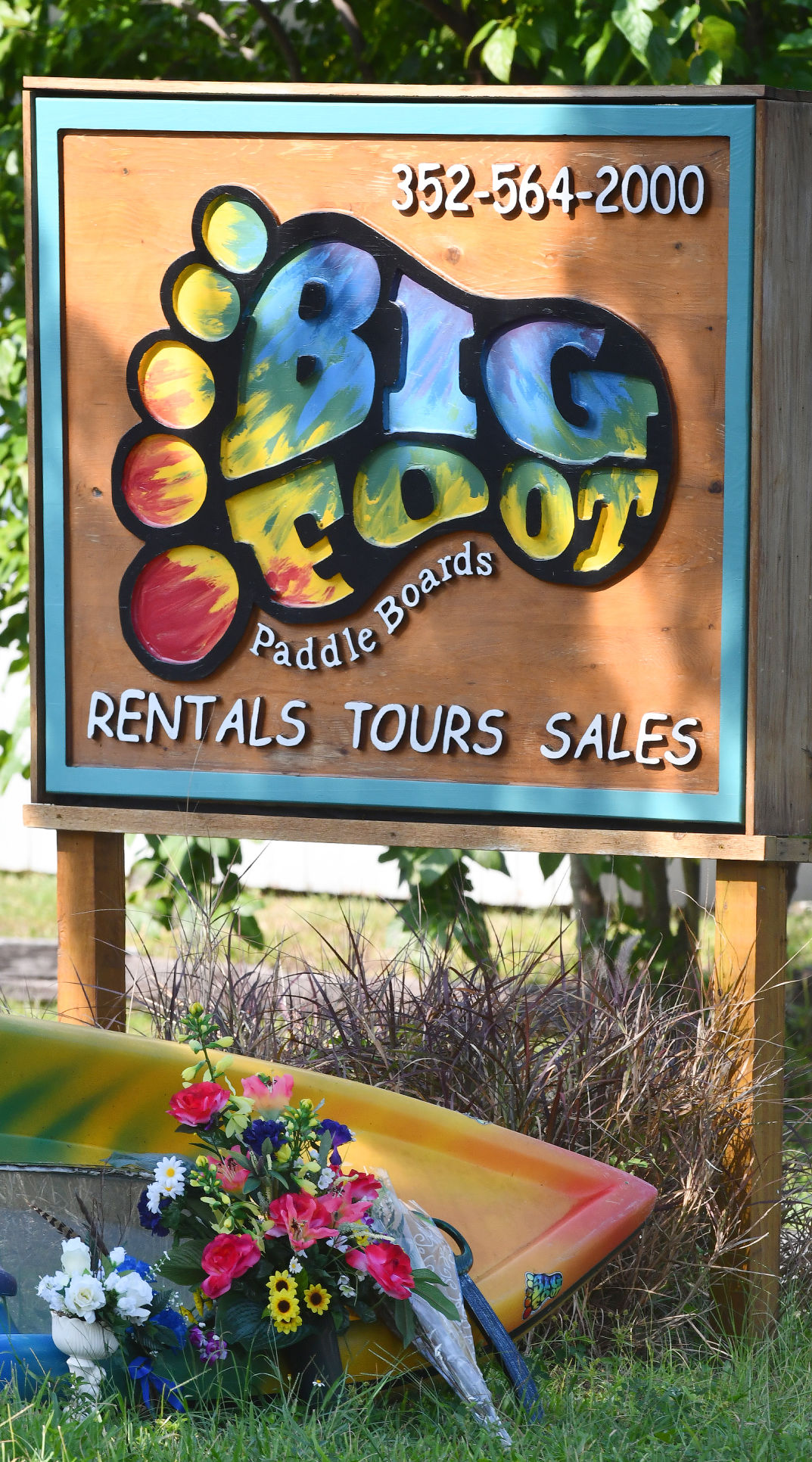 Flowers are placed in front of Big Foot Paddle Boards Wednesday in memory of the former owner of the shop, Josh Hensley. Hensley, a popular figure known locally as Capt. Jack, died over the weekend.

Josh Hensley rides a sea turtle paddle board in King’s Bay at the King’s Bay Pirate Fest Invasion of Citrus Avenue in Crystal River in May, 2016. Hensley died this past weekend. He was 43.

Flowers are placed in front of Big Foot Paddle Boards Wednesday in memory of the former owner of the shop, Josh Hensley. Hensley, a popular figure known locally as Capt. Jack, died over the weekend.

Whether he was Josh Hensley, the designer/artist/business owner of Big Foot Paddle Boards, or “Captain Jack Sparrow,” pirate/entertainer/ambassador of good vibes and good times at Hunter Springs, the Crystal River man on the paddle board was a local legend.

His body was recovered Monday from the waters of King’s Bay near Pete’s Pier in Crystal River. Prior to that, he was last seen around 6:30 p.m. Saturday at Hunter Springs Park, launching his paddle board, most likely heading to Shell Island to watch the sunset, something he often liked to do.

As a young teen, Hensley came to Citrus County from Ohio with his family in 1990.

Childhood friend Matthew Lytton recalled him back then as a “country boy in cowboy boots, jeans and flannel shirts.”

“He didn’t even know how to swim that well,” Lytton said. “But we became friends and hung out swimming in the local rivers — we spent a lot of time in Chassahowitzka on the backwaters at the dam.”

Lytton said Hensley was quiet back then, and always kind.

“We hung out in the woods in the state forest singing “The Devil Went Down to Georgia” over and over,” he said.

Lytton also remembered Hensley as a talented artist who could draw anything and “worked magic with fiberglass.”

He learned fiberglass while working at Pro-Line Boats.

“I met him while working the night shift stringer crew at Pro-Line Boats when he was just turning 18,” said Donald Driver, Hensley’s best friend. “Later on we worked two jobs doing fiberglass — Fintastics in Homosassa. We did a lot of museum work for places like the Chicago Metropolitan Zoo and the Cincinnati Zoo. We did reproductions of whales and sharks ... and even ‘Jake the Crocodile,’ who was at the Homosassa wildlife park.

“Josh worked hard,” Driver said. “He’d work his regular job — he was building dragster (car) bodies — and then he’d go home and work another five, sometimes 10 hours on his paddle boards. He had a big imagination, and he could bring it to life with fiberglass.”

Around 2009, Hensley started building kayaks. At that time his two daughters were 2 and 4 and wanted their own kayaks, which he built for them.

They were out at Weeki Wachee one day when some people on paddle boards paddled by and one of Hensley’s daughters stood up on her kayak and started to paddle.

That’s when the idea for his Big Foot paddle boards were born.

Hensley as “Captain Jack Sparrow,” the Johnny Depp character from Disney’s “Pirates of the Caribbean” movie, was also born around the same time that Hensley started making pirate-themed boards and rafts for local events like the Crystal River Pirate Festival and the Homosassa River Raft Race.

While his daughters were watching the movie trailer, they thought Capt. Jack was their dad — Hensley resembled Johnny Depp, even without the dreadlocks and eyeliner.

Then, once he grew his beard long and dressed in pirate clothing, it was almost a mirror image with the actor.

“He loved costumes, and loved dressing up for Halloween, so this was a natural for him,” said younger brother Benjamin Hensley. “He loved making people happy.”

Big Foot Paddle Boards opened January 2018, and Hensley received the New Image Award for his business from the Citrus County Chamber of Commerce in May 2018.

As Jack Sparrow, Hensley was often seen paddling the waters at Hunter Springs Park, one of his favorite places.

Art Jones, One Rake at a Time founder and president, commented on Facebook: “He could always be counted on to help clean up the swimming area at Hunter Springs every time I had a clean up. Josh loved to be outside living life to its fullest.”

Hensley/Sparrow never tired of having his photo taken with tourists or locals, twirling fire batons in the dark of night out on the water or tipping his hat to passersby.

“He was a celebrity in Crystal River,” said Laura Lou Fitzpatrick, Crystal River native and owner of Heritage Village on Citrus Avenue. “When you live on the river, you can’t help but to become friends with many of those who travel by your home on a daily basis. Josh Hensley — Captain Jack — was one of those regulars. It was obvious he loved to entertain, and if we were lucky enough to be outside on the dock when he was passing by, he would do one of his many stunts he mastered, just to bring smiles to our faces.

“We weren’t alone — he did this for many, every day of the week,” she said. “That is just who he was, a friend on the river that brought laughter and joy wherever he roamed ... and he will be greatly missed.”

Sorry to hear Josh passed. My granddaughters will be very upset. Seeing Captain Jack at Hunter Springs was always a highlight of their trips from DC. He was always surrounded by a crowd,making people happy.