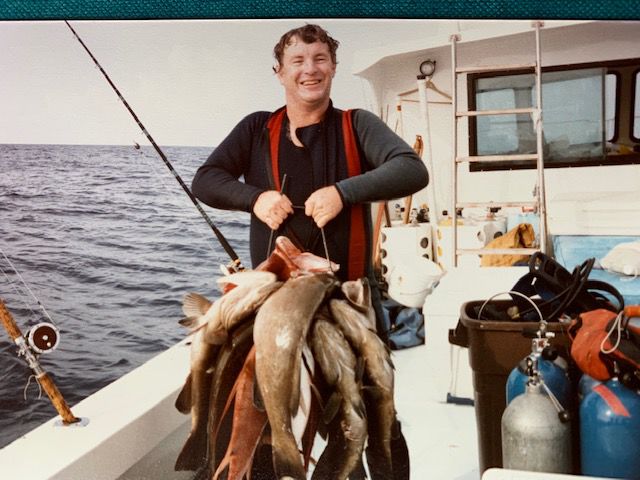 John "Hale" McKethan loved spearfishing, and spent many years as a commercial fisherman. He died Aug. 3 at age 71. 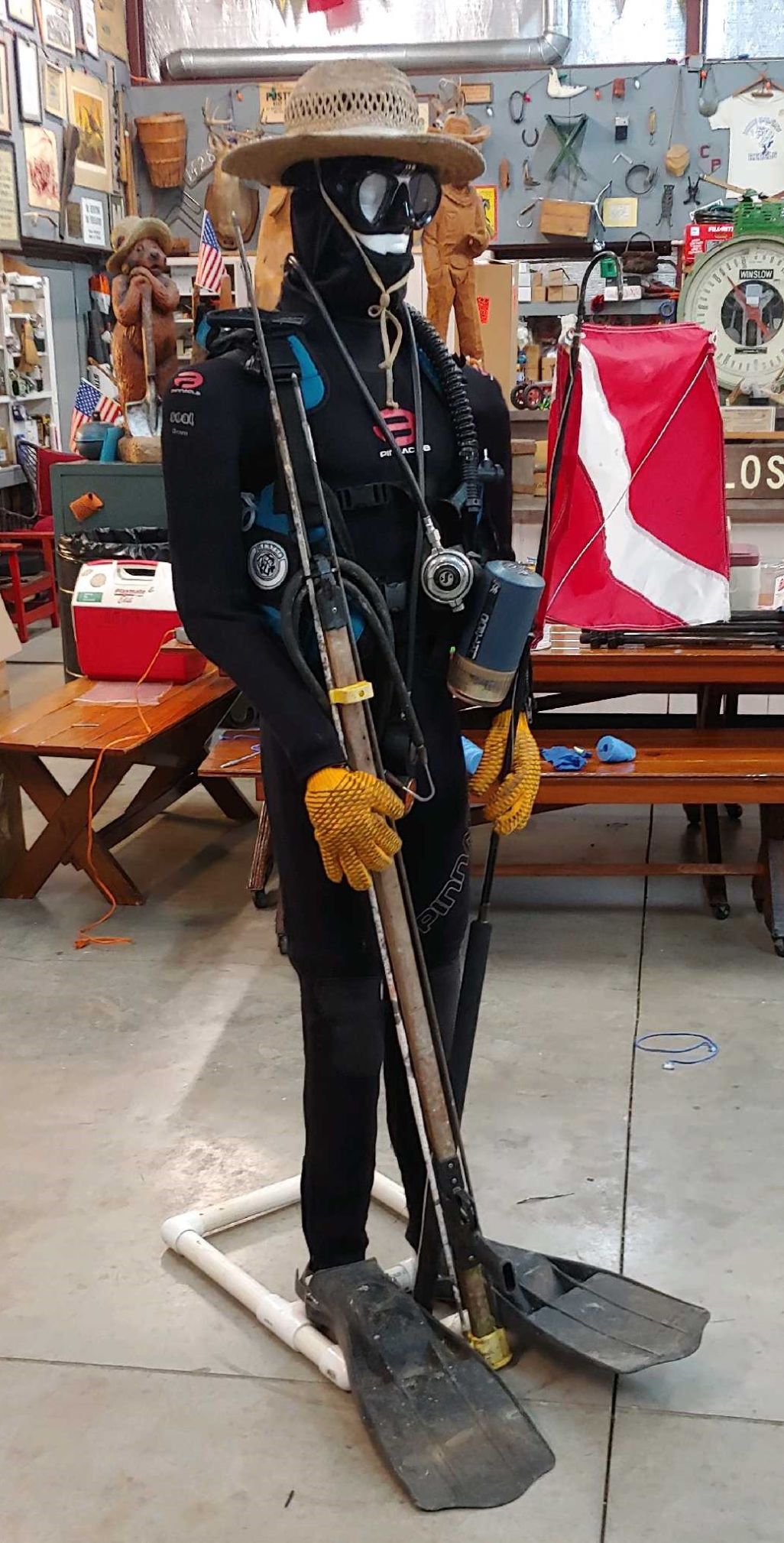 As a tribute to Hale McKethan and his love for diving, friends created what they dubbed "Skinny Hale" using Hale's gear. McKethan died Aug. 3. 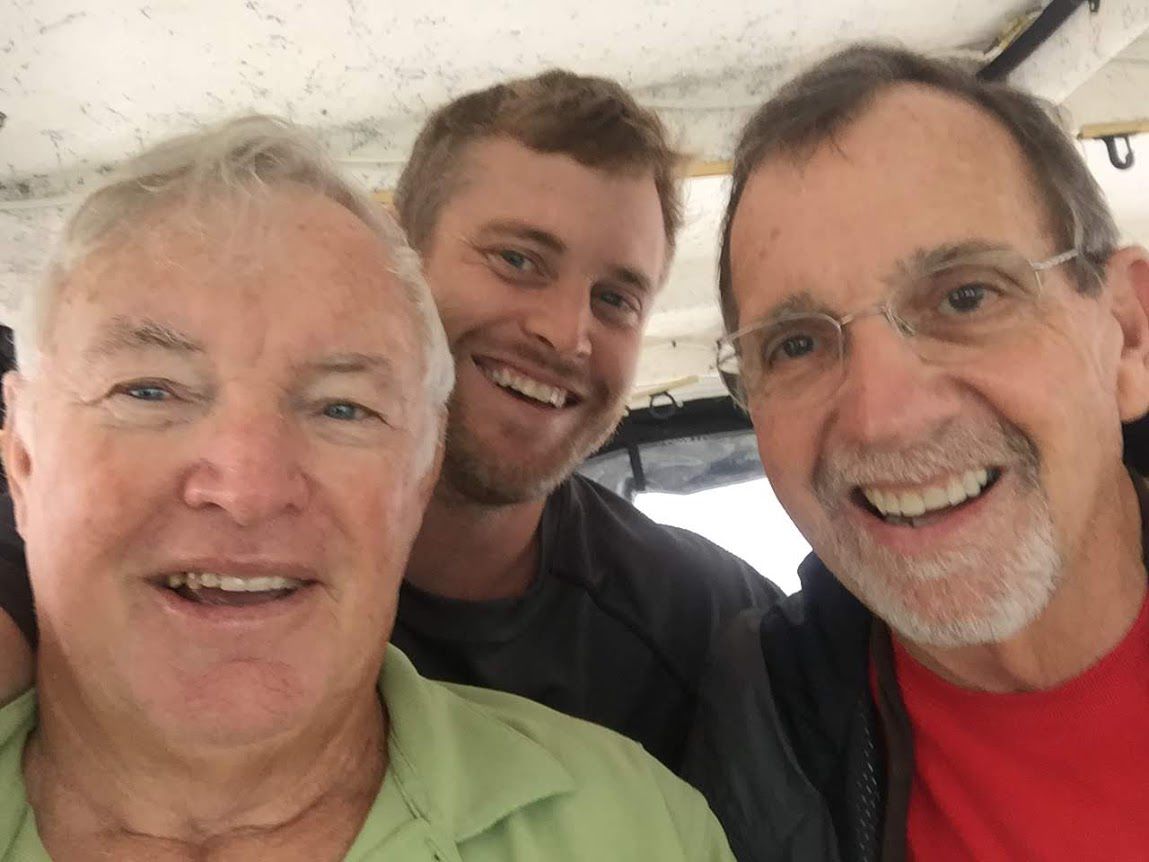 Hale McKethan sharing a good time on the water with his son, John, and good friend Dixie Hollins.

John "Hale" McKethan loved spearfishing, and spent many years as a commercial fisherman. He died Aug. 3 at age 71.

As a tribute to Hale McKethan and his love for diving, friends created what they dubbed "Skinny Hale" using Hale's gear. McKethan died Aug. 3.

Hale McKethan sharing a good time on the water with his son, John, and good friend Dixie Hollins.

Those who were fortunate enough to go out spearfishing with Hale McKethan would surely remember his command: “Dive, dive, dive! Shoot something — get ‘em started.”

Every trip, every dive, no matter if it was your first dive or your 51st, that’s what he’d tell you as you went over the side of his boat and into the gulf water, hunting for grouper or hogfish or mango snapper.

As boat captain, he was THE captain, “through storms, gale force winds and blue water over the flybridge,” said longtime friend Dixie Hollins in his eulogy for John “Hale” McKethan, who died Aug. 3 at age 71.

“He was always there for you: under the water or in the boat,” Hollins said. “He’d always come pick you up, (if) you were a little unfortunate at times, on some of those long drift dives (when) you come up and you say, ‘I hope Hale sees us.’ And he always did.”

Hollins called Hale the finest spearfisherman he ever met and described him as kind and warm, generous with a heart of gold, an adventurer who loved scuba diving and snow skiing, golf and movies.

He loved people, loved the University of Florida Gators — and Hellmann’s mayonnaise.

Born and raised in Brooksville, Hale had a number of careers and business endeavors — commercial fisherman, partner in a dive shop, owner of a cattle company. He also served 40-plus years on the board of directors for SunTrust Bank.

But of all his interests, spearfishing and diving, including diving for lobsters and for “treasures” lost or discarded at sea, topped his list of favorite things to do and share with friends.

However, if he invited you on a two- or three-day trip, you needed to be prepared to be out all week. Hale stayed out on the water until he was ready to come back in.

He owned several boats, but his favorite was the Miss Sharon II.

Hale moved to Citrus County in 1969, three years after graduating from Hernando High School in 1966.

A big man, some might say Hale McKethan was larger than life. He had a big personality and loved life — and loved winning.

On one dive trip, a first-timer came back with his spearfishing stringer loaded with fish.

When the first-timer climbed back into the boat, one of the other guys onboard told him, “Don’t say anything; just put the fish in the box — and no bragging.”

Hale didn’t say a word. He just walked up to the boat’s wheelhouse, drove to another spot and got back into the water by himself.

“He did a solo dive so he could get ahead of us, and he did,” recalled Dixie Hollins. “He was always ahead of us.”

That was Hale. He was competitive, but at the same time generous. There was no rancor or ill will with him.

And that man loved to eat.

He knew every steakhouse in Florida and was particularly fond of Bern’s Steak House in Tampa.

He liked his steaks cooked medium.

For breakfast, he liked to go to Mama Sally’s where he’d order pancakes with butter and sugar-free syrup.

Why sugar-free? He said it made ordering pancakes “justified,” like drinking Diet Coke with a piece of cake. One balanced out the other.

He liked fried venison and fried green tomatoes, Kellogg’s Raisin Bran and bananas — and anything sweet.

Hale played poker every Thursday, but he didn’t drink alcohol or smoke, so at his weekly poker game he and his poker buddies would each bring sweet treats to share and eat cookies and cake and pie, etc. while they played cards.

It’s quite possible, however, that Hale loved Hellman’s mayonnaise best of all. There was no such thing as too much Hellmann’s mayo on a sandwich, and if you skimped on it when making him one while out on a diving trip, you would definitely need to bring it back to the galley and add more.

And you loved doing it for him, because you knew he would give you the shirt off his back if you needed it.

Hollins said the most memorable dive trip he ever took with Hale — and there were many — was the time they caught more than 1,500 pounds of fish.

As all the guys on that trip cleaned fish, the sun was setting and Hollins started playing a cassette tape on his boom box, Clarence Carter’s song “Strokin.’”

The day was magical, the way friendship is magical and imprints memories on a person’s heart.

Hollins said Hale McKethan will be missed, the big man has left a huge hole in the hearts of his family and friends.

Hale will be missed. He was a great man.