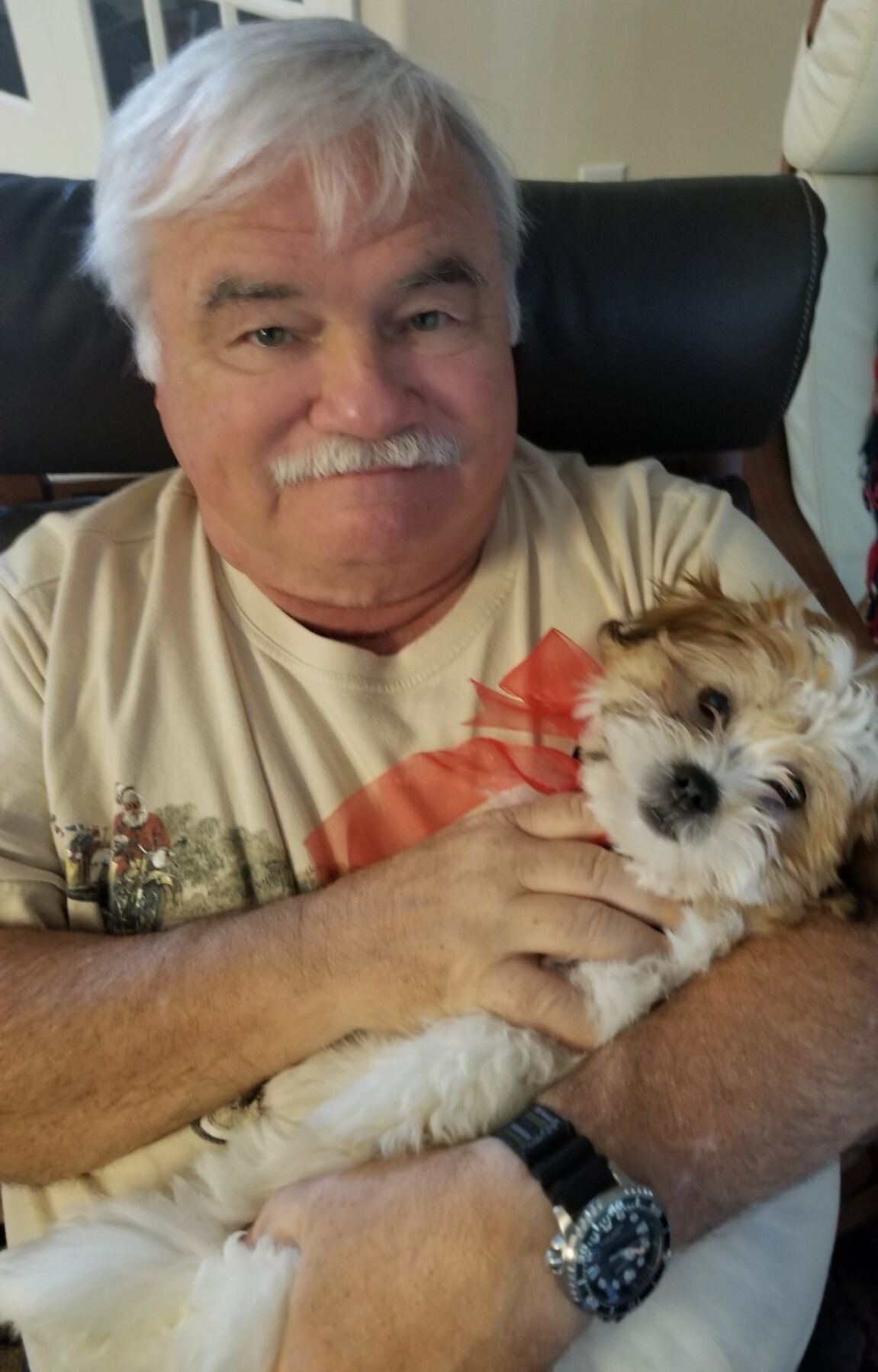 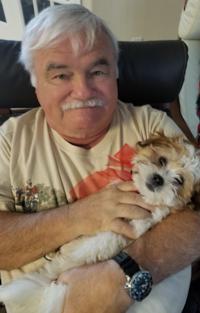 George Bacon, who died April 2 at age 69, and his dog, Bonnie Belle. 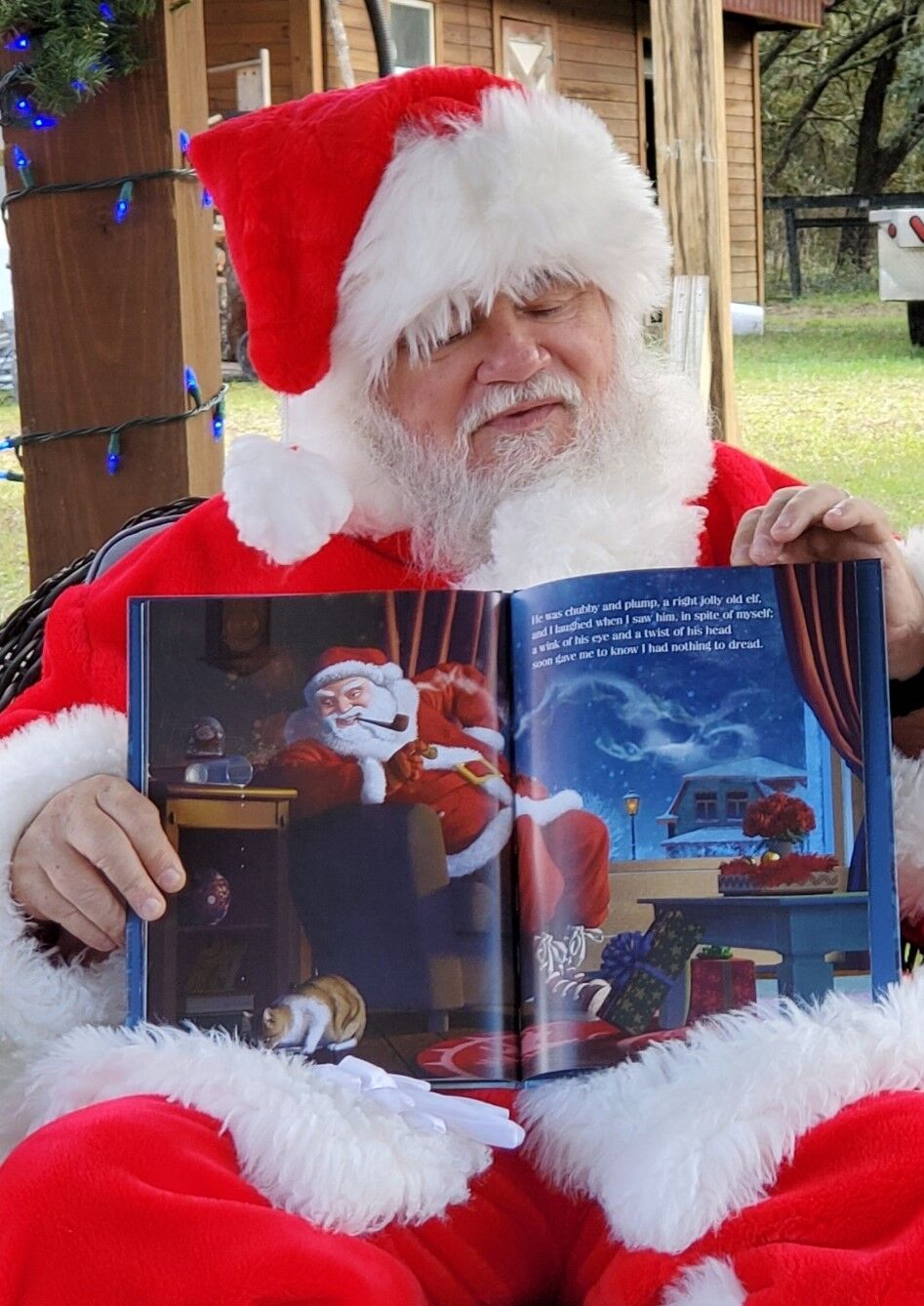 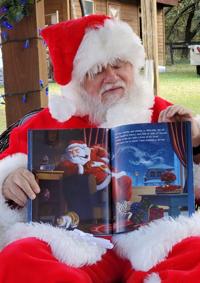 Jovial and joyful, George Bacon was a natural as Santa Claus. Bacon died April 2 at age 69. 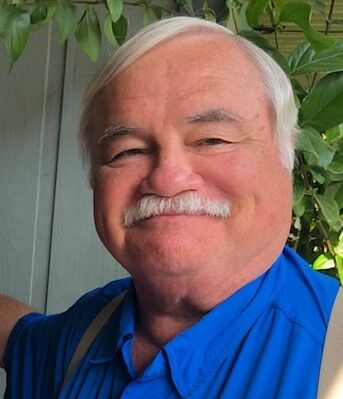 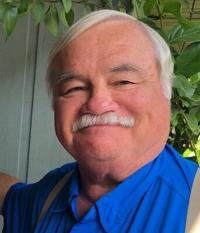 Forever a Pirate, George Bacon was a favorite science teacher at Crystal River High School among students and staff. He died April 2 at age 69.

George Bacon, who died April 2 at age 69, and his dog, Bonnie Belle.

Jovial and joyful, George Bacon was a natural as Santa Claus. Bacon died April 2 at age 69.

Forever a Pirate, George Bacon was a favorite science teacher at Crystal River High School among students and staff. He died April 2 at age 69.

The 2011-12 school year was about to start when Danielle Doherty-Koch was hired at Crystal River High School as a long-term substitute teacher.

“They said, ‘Here’s your classroom. Have fun — Open House is tonight,’” Doherty-Koch said.

Her classroom was filled with boxes and she didn’t have a clue what to do next.

In pops George Bacon, the seasoned science teacher in the classroom next door, saying, “Welcome! What can I help you with?”

“That was the first thing he said to me — ‘What can I help you with?’ And he sat with me for hours, helping me go through stuff and organize. He taught me the ropes...and continued to teach me,” she said. “He was a father figure for me here. He was always there, always ready to drop everything to help somebody.”

For 36 years, Bacon taught science classes at CRHS — and so much more.

It was with great sadness that his former students, co-workers, friends and family learned the news that George Sewell Bacon died April 2. He was 69.

“He was one of the most influential teachers I ever had and served a lot of different roles in my life,” said Duane Redding. “He was a father figure, a mentor, a best friend ... and if it hadn’t been for the time he took and the general good-heartedness to look out for me, I doubt very much I would be where I am today, a chief engineer at NASA.”

Redding described Bacon as an “open thinker,” always talking about possibilities and not limiting your dreams.

“He’d say, ‘You have no limit’ and ‘Decide what you want to do and make that happen.’ You could go to him with any problem, and even if you did something stupid, there was never any judgment,” Redding said. “He wasn’t quick to admonish you on your errors; he was quick to help you learn from them.”

Bacon grew up in Hampden, Maine, near Bangor, and served 10 years as a helicopter medic in the Army National Guard in Maine.

He and his first wife came to Florida as teachers, first to Ocala and then to Citrus County where Bacon taught science, biology, anatomy and physiology.

At his core, he was a healer, said Nancy Bacon, his wife of six years whom he met at church.

“George was a Reiki master, which he considered one of his ministries,” she said. “That was his way of healing people.”

He was also an ordained minister from the Universal Life Church, and he officiated at many weddings and funerals of former students.

“We felt we were soul mates,” Nancy Bacon said. “God brought us together — we were going to grow old together.”

One of George Bacon’s best attributes was the way he listened.

His was the classroom students went to before and after school, just to hang out and talk.

“He was an amazing mentor,” said Megan Bramlett. “He was my home room teacher in high school — full of laughter, guidance and love. As an adult, he tutored me in anatomy and physiology for nursing school.

“He was a godly man who always had a prayer for me," she said. "When I would see him, he always offered his smile and positive words. He epitomized what a teacher is; he never stopped helping his students.”

“He was my ninth grade science teacher ... and we stayed in contact since then — he and Nancy supported my sheriff’s campaign,” said Patrick Crippen. “George was one of those guys that people were attracted to because he was pure-hearted ... and believed in his students unconditionally. We need more teachers like him.”

As a teacher, Bacon had a way of opening up a topic and inviting you in, telling stories that seemed to not have anything to do with what he was supposed to be teaching until he was finished and you realized he had put flesh on a topic, had illustrated a concept.

“He could be talking to 200 people, but he was talking to just you,” Duane Redding said. “Being able to do that is something very rare.”

George Bacon was a man of many interests.

He collected teddy bears and puppets, sang with the praise team at church, Crystal River United Methodist Church. He kayaked, loved to dive and go snorkeling.

He spent many, many hours diving in Bluebird Springs helping to clean it out.

He wore a kilt sometimes, even to school, Stewart red plaid.

He was good at remembering jokes. His dream was to build an amphibian airplane, but never got the chance.

“He was a master at forming relationships with students, which is the most important thing you can do as a teacher,” Doherty-Koch said. “His students knew he cared about them.”

Bacon loved animals and critters, especially reptiles — his lizards Bonnie and Clyde and his bearded dragon.

He was Santa Claus — jovial, joyful.

He was many things, but always a teacher.

After he retired in 2014, he returned to CRHS and volunteered to teach a year of science — without pay — just because they needed a teacher.

A Celebration of Life will be at 11 a.m. Saturday, April 10 at Crystal River United Methodist Church, 4801 N Citrus Ave, Crystal River, FL 34428. Family visitation is from 10-11 a.m. This service will also be streamed on the church's website for those who are unable to attend at www.crumc.com.