Scott Adams believes the corner lot is a perfect location for a six-story office building. "It would put commerce right where it's needed," he said. 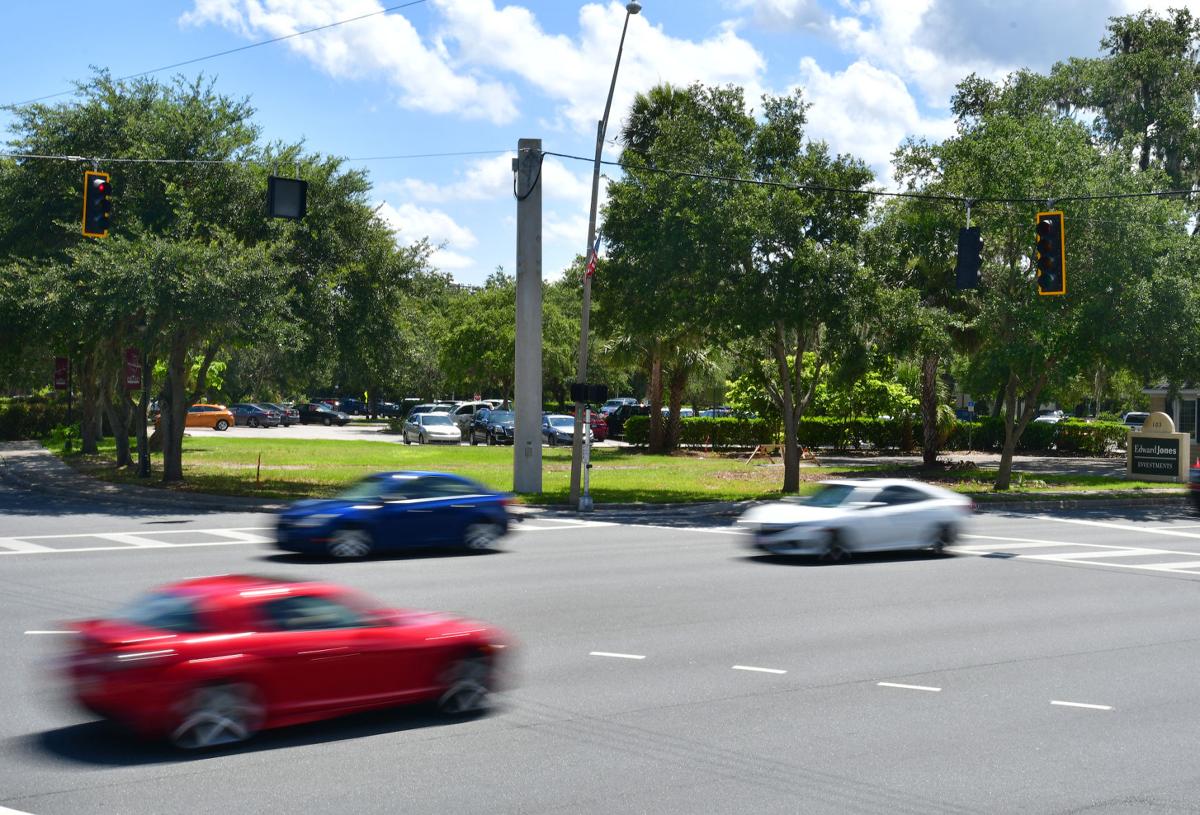 Scott Adams is planning a three-story office building on the vacant lot on the corner of Courthouse Square and U.S. 41 in Inverness. The lot is less than a quarter-acre and sits directly across from the Old Courthouse.

One of Inverness’ smallest downtown commercial lots is another step closer to being home to the county’s tallest building, to measure six stories and tower over the city’s skyscape.

The proposed glass and brick, mixed-use office and retail building would incorporate similar brick work to both Inverness City Hall and the historic courthouse. The building’s metal roof would be bronze, some of the plaster would be sandbar. The ground floor would have textured, red brick with bronze awnings. The building just under the roof would also have balusters.

“We want the building to be compatible with the nicest buildings in the downtown, or nicer,” Scott Adams told the Chronicle. “It (will) reflect between the old (historic courthouse) and the new (city hall) and the Masonic building.”

“So when you come down the road (into downtown) it’s a reflection of all three buildings,” Adams said.

While some critics of the building complain it will be too tall, Adams said the six stories avoid urban sprawl and utilize a smaller footprint, leaving space for pedestrians to walk and enjoy downtown.

“I think it will complement downtown wonderfully,” he said.

The size of the lot will not provide Adams with much room for error, though.

The property is only 0.15 acres, according to the Citrus County Property Appraiser website.

But Adams said he will be up for the challenge.

He said the building will include as much as 30,000 square feet of mixed office space. While the specifics of the design still have to be hammered out, Adams thinks the first floor could include a mix of retail, restaurants, commercial or government office space. But all that will be determined as the process continues and Adams negotiates with potential tenants and their needs for the building.

Adams estimates the cost of the building would be about $4 million. But the price could change, he said, because early tenants would be given the option of designing and building their own interiors to meet their specific needs.

Adams estimates the project will take about a year to go through the city’s architectural/Aesthetic review committee and then the city’s building department’s review and then to make any needed changes. After that it will take another year to build.

“This was no quick deal. It’s a long process,” he said.

But while the process has been slow thus far, interest from potential tenants has been high, including larger franchise chains, he said.

“We’re prepared to put the money out to make this happen and take the risk because we feel confident enough that there’s a demand,” he said.

Meanwhile, with little space for parking, Adams said he’s worked out a deal with city officials to pay Inverness about $100,000 toward its parking program to allow for his building’s parking impact.

“We want to make this a win/win for the City of Inverness (and the office project),” Adams said.

The building, which will also be next to Edward Jones Investments on one side and a county parking lot on the other, will also include an electric sign that will allow for advertisements and local community announcements.

While the signage will generate additional income, that revenue will help keep rental costs down, Adams said.

"The logistics of construction has been a challenge, but we got it down and got it right,” Adams told the Chronicle

Inverness City Manager Frank DiGiovanni thinks that once detailed plans arrive at the city’s building department for approval, city staff could have them reviewed and processed in three to six months.

DiGiovanni said that part of the city’s process will be how well the office building fits with the rest of downtown.

“Could it fit in? Why wouldn’t it?” DiGiovanni said.

The site was previously the location for a bail-bonds business before that building was torn down in the early 1990s, he said, so a well-designed office building with historic features matching the rest of downtown could be an improvement.

The following are documents submitted by Scott Adams to the City of Inverness for architectural review. These designs are proposals and not fi…