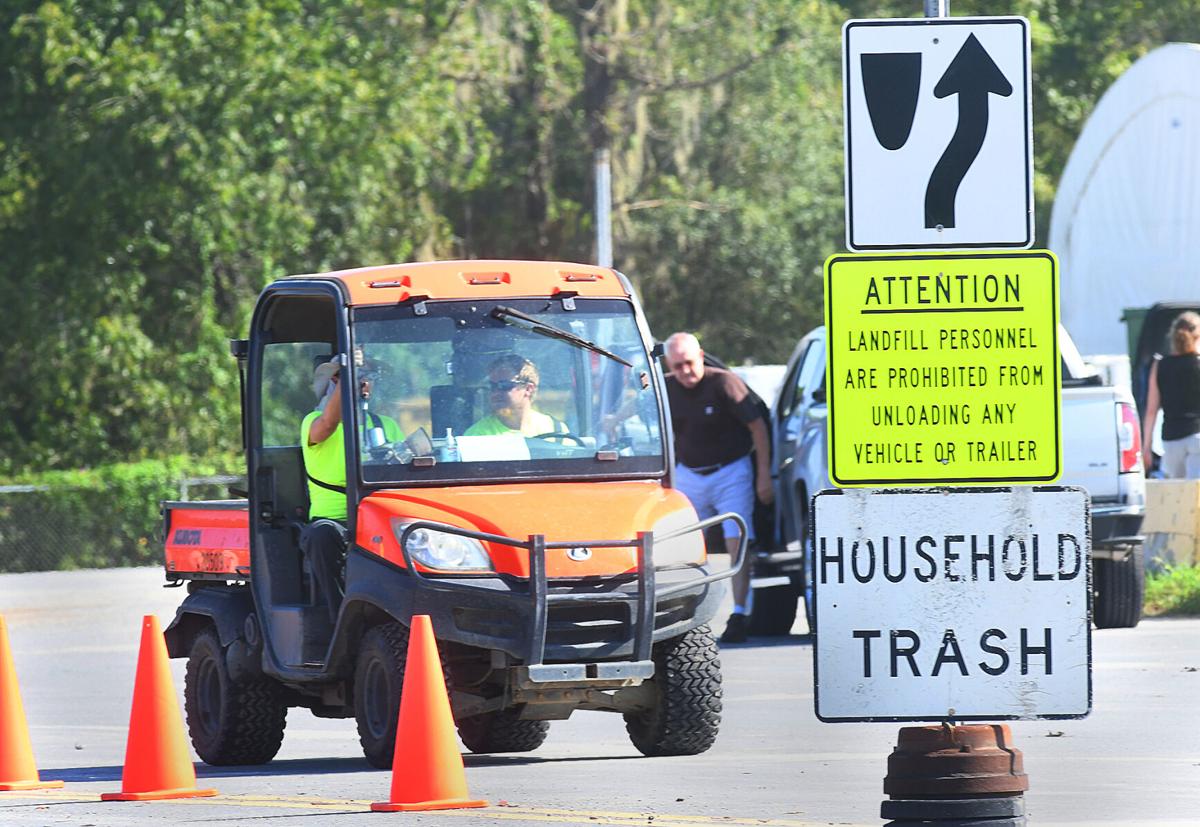 Two Central Landfill workers drive through the landfill Thursday morning, Sept. 3, 2020 as residents dispose of their garbage and recyclable materials. County Administrator Randy Oliver said the passage of Amendment 2 could have a negative impact on the local economy, be detrimental to seniors and lead to lower morale among county employees. 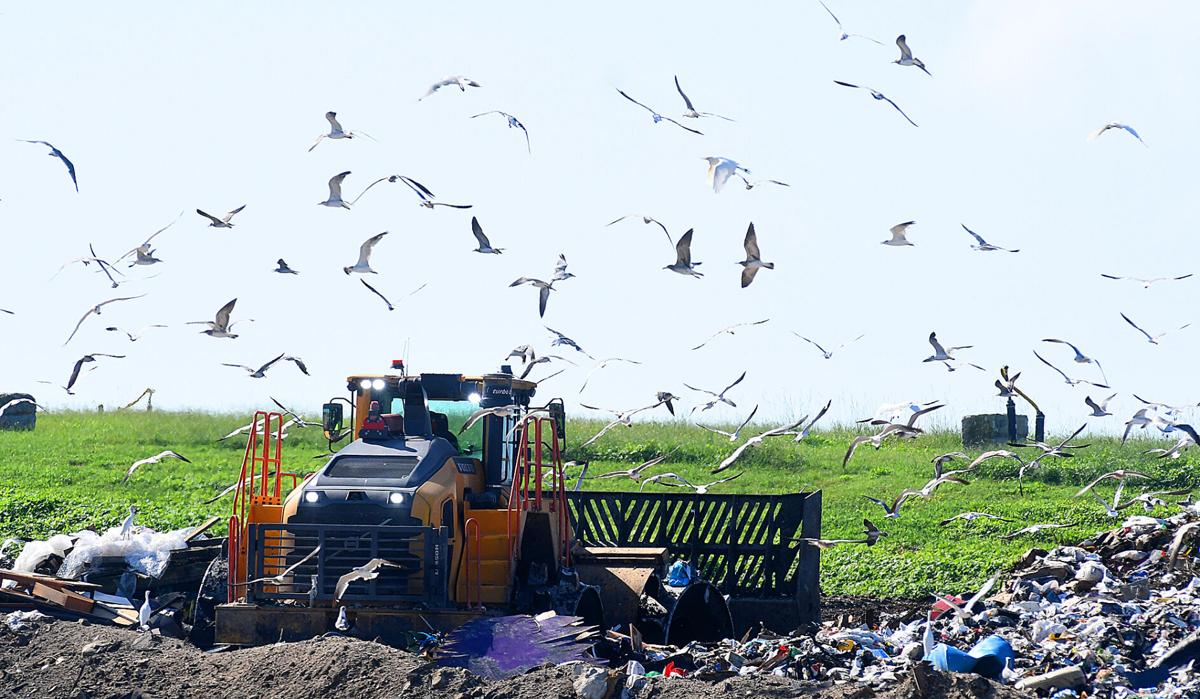 A heavy-equipment operator moves mounds of garbage at the Citrus County Central Landfill Thursday, Sept. 3, 2020. The cost to bring all employees up to $15 per hour per the schedule called for in Amendment 2, would be about $200,000 per year for four years starting Oct. 2, 2022 and affect 194 employees, said County Administrator Randy Oliver.

Two Central Landfill workers drive through the landfill Thursday morning, Sept. 3, 2020 as residents dispose of their garbage and recyclable materials. County Administrator Randy Oliver said the passage of Amendment 2 could have a negative impact on the local economy, be detrimental to seniors and lead to lower morale among county employees.

A heavy-equipment operator moves mounds of garbage at the Citrus County Central Landfill Thursday, Sept. 3, 2020. The cost to bring all employees up to $15 per hour per the schedule called for in Amendment 2, would be about $200,000 per year for four years starting Oct. 2, 2022 and affect 194 employees, said County Administrator Randy Oliver.

Rich Lucy, owner of Hardwood Smokehouse, said he would be forced to close his barbecue restaurant if Florida Amendment 2 passes in November.

“That would put me out of business,” said Lucy, whose restaurant is inside the Crystal River Mall.

Lucy said he’s dealing with rising food and beverage prices because the pandemic has created supply issues. He already has his two daughters helping out for tips only, just to help keep payroll low.

He has 12 employees right now, enough to handle the 50% state-mandated capacity. His dishwasher is the lowest paid at $11-an-hour. His highest paid cook makes $13.50 per hour.

Lucy said he could possibly struggle through and recoup costs by hiking prices but he’s fearful of losing customers.

“Then I price myself out of the market,” he said.

Having to start increasing salaries right now would be crippling, he said, to all smaller mom-and-pop businesses.

“You would finish off the rest of the mom and pops,” he said. “The only ones that would be able to support it would be the chain restaurants because they have the banks to back them.”

But, as with all things in life, there are two sides and this amendment is no different.

“Workers deserve a decent wage so they can feed their families,” said Kate Betsko, vice president of the League of Women Voters of Citrus County, whose organization is supporting Amendment 2. “Who can live on what they’re getting paid now?”

Betsko said the argument that the wage increase would break employers should be softened because the hike is incremental.

“It’s a gradual increase,” she said. “It’s not the next day and hopefully our economy will adjust to the increases.”

Many local families are having a tough time making it, she said.

“I think it will help Citrus County so people can afford to live,” she said. “Right now, the income level is so low they have to work three or four jobs to make ends meet and that’s silly.”

Sundberg: Wrong use of minimum wage

Morgan Sundberg, owner of Kane's Cattle Co., The Loft Bar & Grill and Lollygaggers Sports Pub & Grill, said she and her husband are against the amendment and not so much from an employer standpoint.

Looking at the bigger picture, the cost of goods will increase to make up the payroll difference and the cost of living will go up. The only winners will be the government because of a higher sales tax and federal employment tax, Sundberg said.

Amendment supporters, she said, are declaring the $15 as a “living wage,” which is not what minimum wage is supposed to be, Sundberg said.

“Minimum wage is supposed to be for entry-level, unskilled and uneducated positions in the workplace, not careers,” she said. “This would devastate the small-business community that has already been severely impacted by the coronavirus. It is going to take years for the businesses to recover, if they recover.”

Sundberg said she and her husband Kason would support a small increase, but not one of this size.

Josh Wooten, president/CEO of the Citrus County Chamber of Commerce, said this “one-size fits-all amendment will have a negative impact on Citrus County businesses.”

“We hear the argument that the big-box retailers and burger franchises can afford to pay $15 an hour,” Wooten said. “Maybe they can. But the majority of our members are small businesses working on thin margins. What about your florist, your dry cleaner, or gift shop?

“We believe in a decent minimum wage with an annual cost-of-living increase,” Wooten added. “But after that, the free market should dictate wages for different job categories. This amendment, as written, is not realistic or sustainable for most of our small businesses for financial and geographic reasons.”

“It will hurt businesses and it will destroy Florida’s economy,” Dover said. “We are putting more than 2 million potential jobs at stake here in Florida.”

“It’s becomingly glaringly obvious to everyone that the people who are wealthy are doing quite well in this economy and yet the minimum wage people are hovering on the verge of poverty,” Reagan said.

“If you work 40 hours a week, you should be able to pay your rent and have food and clothes and that’s not true anymore,” she added.

Reagan said small-business owners, including restaurateurs, might have to raise prices slightly to help pay for the raises. But studies have shown, she said, that while they may take a short dip in sales, customers will adjust.

“Is it really a hardship if the local economy charges 10 cents more for a sandwich until things level out again?” she asked. “It comes down to quality of life for Americans.”

A Miami-based organization called Florida For a Fair Wage is leading the campaign in support of Amendment 2. The committee has reported $4.67 million in contributions and $4.55 million in expenditures.

"Florida needs to pass the Fair Wage Amendment to ensure that all hard-working Floridians can receive a living wage,” according to the organization. “The 'living wage' is the minimum cost that covers the basic needs of an individual and the needs of their family without government assistance."

Multi-millionaire trial lawyer John Morgan of Orlando is the Amendment 2 sponsor and chair of Florida for a Fair Wage.

"Years ago in the south they said the economy will not work if we don’t have slaves,” Morgan said. “They were so adamant about it they went to war over it. They fought each other to own people. What’s going on in America today is we’re paying people slave wages and I’m ready to go to war for that.”

• A “yes” vote would increase the state's minimum wage incrementally until reaching $15 per hour in September 2026. A "no" vote keeps the current minimum wage of $8.46 per hour.

• A 60% supermajority vote is required for approval.

• If passed, the minimum wage would increase each year as follows:

• Beginning on Sept. 30, 2027, there would be an annual adjustment to the state minimum wage based on increases to the Consumer Price Index for urban wage earners and clerical workers