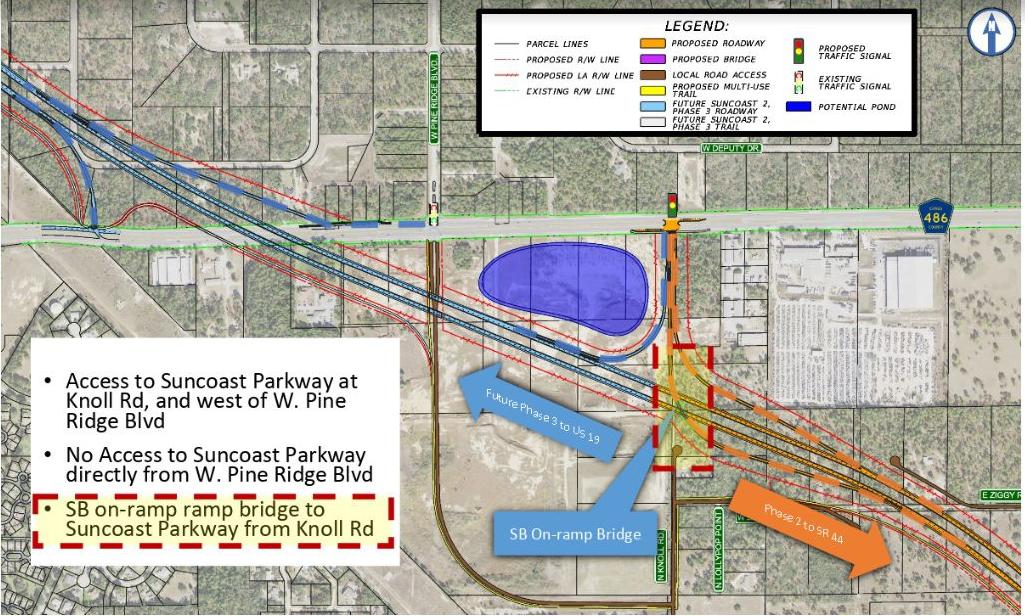 The latest FDOT proposal shows an interchange from the Suncoast Parkway at C.R. 486 east of the Pine Ridge entrance.

The latest Suncoast Parkway maps for the route north of State Road 44 show interchanges at County Road 486 — but avoiding the entrance to Pine Ridge.

The maps, part of a PowerPoint that state transportation officials planned to show at an open house in September, say funding is in place to extend the parkway 3 miles north from S.R. 44 to C.R. 486 in 2023. 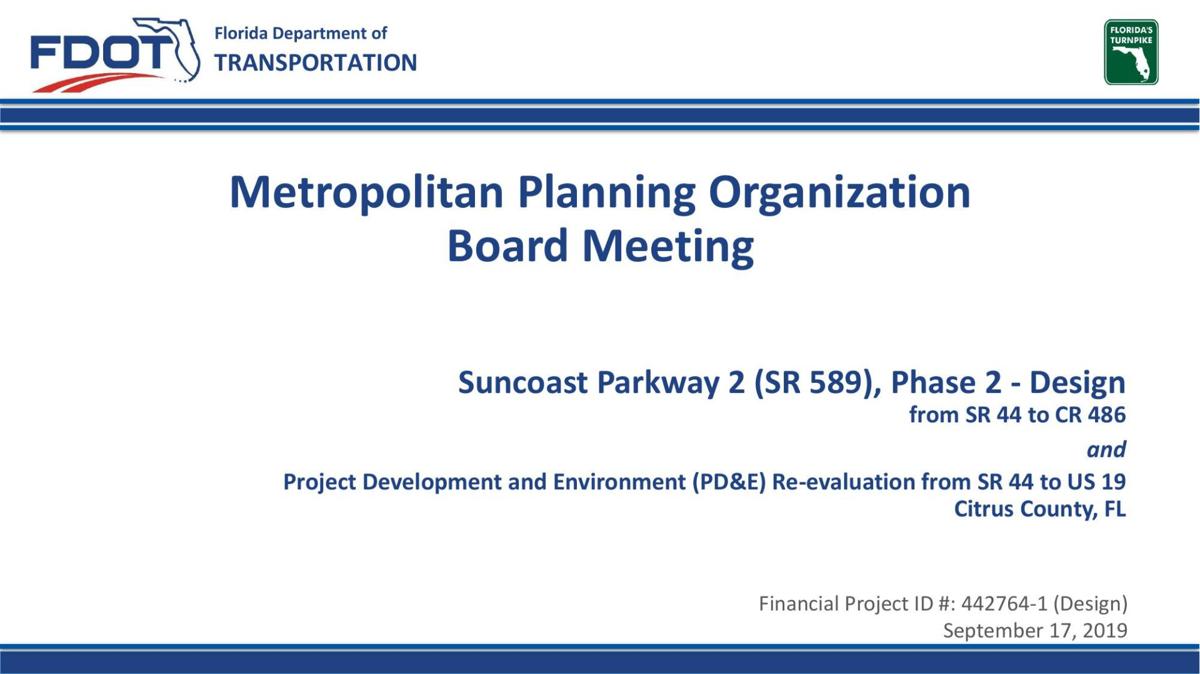 Florida Department of Transportation cancelled the Sept. 19 open house. A spokeswoman said it was postponed to provide more time to develop design alternatives; the date has not been reset.

Maps show two interchange alternatives at C.R. 486. One would come out at Knoll Road, a private dirt two-track road about a quarter-mile east of Pine Ridge Boulevard near LKQ Crystal River, formally Damron’s.

The other alternative shows two potential interchanges for the Suncoast as it continues northwest to U.S. 19: One at Knoll Road and the other about a quarter-mile west of Pine Ridge Boulevard.

Jim Tucker, a board member of the Pine Ridge Property Owners Association who is closely following the parkway discussion, was pleased to hear of the new maps.

“If those are the two locations, I’m glad to see it’s not across from Pine Ridge,” he said.

The preliminary maps are far different than those considered in 2016, when the state’s initial thought brought the parkway to C.R. 486 directly opposite the Pine Ridge entrance. Several Pine Ridge residents and community leaders asked for county commission help in moving the interchange because they feared a rash of traffic in and out of Pine Ridge related to the parkway.

County Commission Chairman Jeff Kinnard said he also was happy to hear the state was moving interchanges away from Pine Ridge.

“That address their concerns and gets an interchange at 486, which could certainly be beneficial from an economic development standpoint,” he said.

The state is currently building the Suncoast Parkway segment between U.S. 98 and S.R. 44. Original plans had it continuing north and west to U.S. 19 north of Crystal River in Red Level, with an overpass at C.R. 486 and an exit at C.R. 495 (Citrus Avenue).

The state is now planning to extend the Suncoast north to Interstate 10 or the Georgia border. Kinnard and Commissioners Scott Carnahan and Ron Kitchen Jr. sit on task forces to discuss both the Suncoast extension and Florida Turnpike extension from Wildwood to the parkway.

Jim Tucker knows as much about the state’s plans for the Suncoast Parkway at Pine Ridge as anyone and even he is in the dark.

Not all paths lead to Pine Ridge, but three of them do.

Eighteen months ago, Ken and Shirley Sponsler found their dream home, the place they would enjoy retirement and reside the rest of their lives.

State transportation officials, for the first time, have confirmed a plan to continue the Suncoast Parkway to County Road 486 to follow the co…

Pine Ridge Estates residents sought support from Citrus County commissioners on Tuesday to keep the Suncoast Parkway from their doorstep.

Since I'm late reading about the extension of Suncoast Parkway. In my opinion they should have left it as is; in Homosassa. It's fine where it ended. I drive on 486 every day to work at the Corporate Oaks Professional Park. I don't care for the way the traffic light on Meadowcrest and 486. The light should one direction at a time. Sometimes it does that, sometimes both directions (opposite) on green and quite frankly I found this very dangerous. There are times if you aren't sure if the opposite direction will stop at the light or not. Now imagine having Suncoast Parkway on 486 and it's gonna be nothing but trouble. The BOCC needs dial all the projects back. They should have focused on finishing Highway 19 then go to 491. Now THAT needs to be done! Terrible job, by the way. Then, we got roads that needs resurfacing all over Citrus County. BOCC is terrible at their jobs. I'll leave it at that.

So now to go to Crystal River, we will have to deal with one or possible two more traffic lights. The high and mighty folks in Pine Ridge should just suck it up, and have the entrance at Pine Ridge. Makes better use of the light that is already there. I for one would not add 10 minutes of drive time to "cut thru" Pine Ridge to get home from the Parkway.

Mr. Wright- thanks so much for those maps!!! Now I just question what the plans might be from Red Level north.