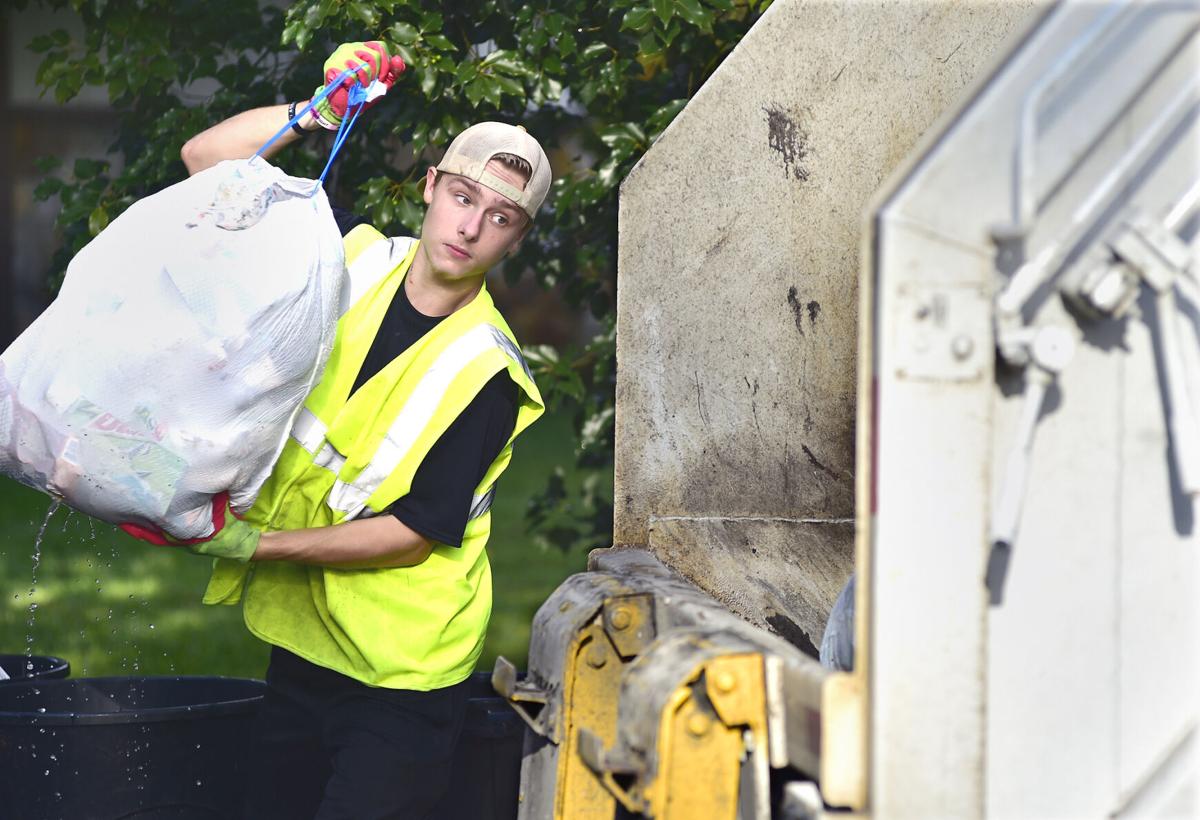 Eighteen-year-old Jeremy Schreifels tosses a bag of trash into Flash Trash truck Wednesday morning, Sept. 22, while on a route in Homosassa. The teen is hoping for a unique surgery to offset the effects of Tourette syndrome. 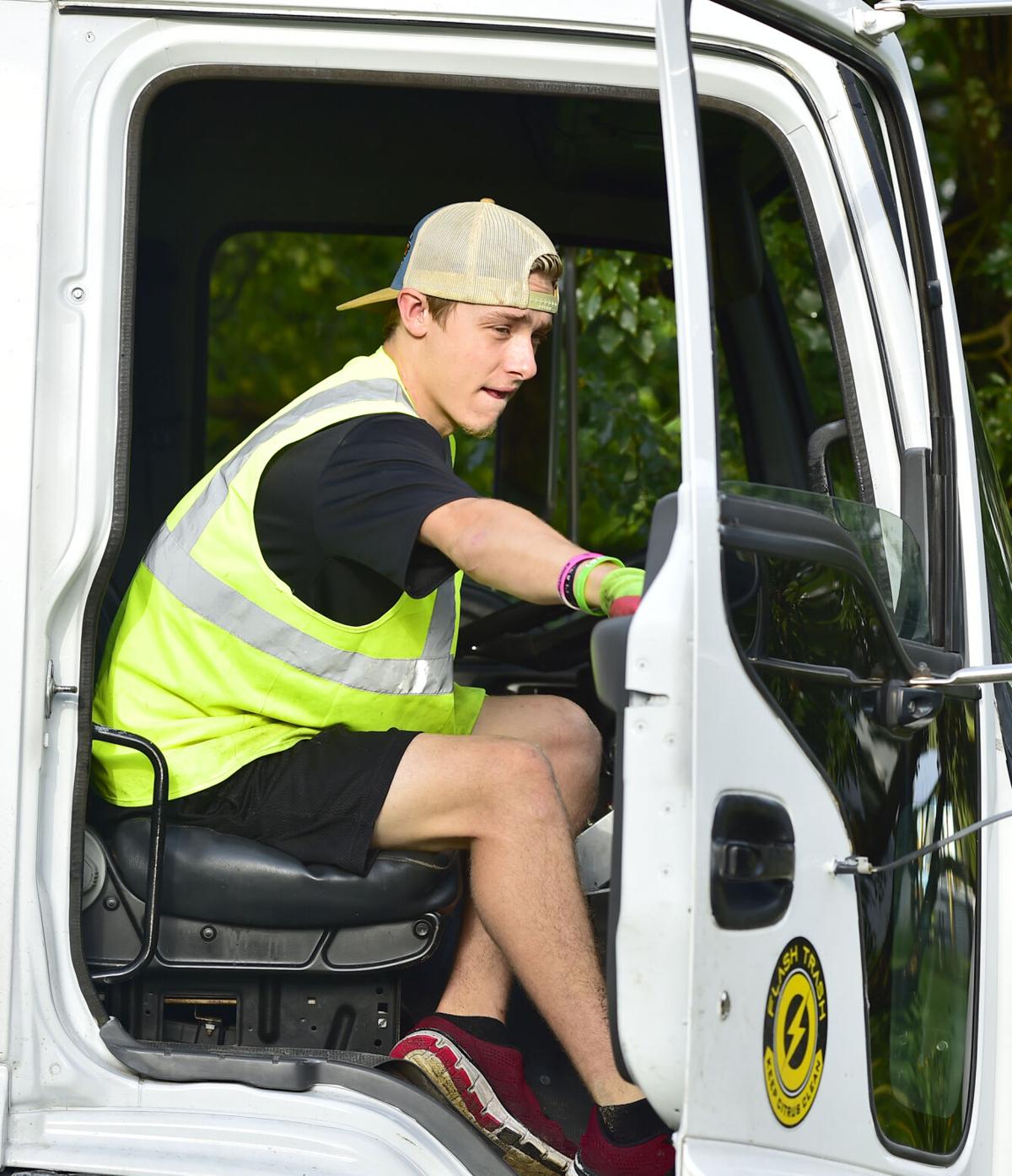 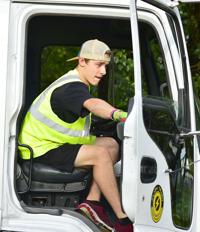 Jeremy Schreifels climbs into the Flash Trash truck he works from Wednesday, Sept. 22, while working in Homosassa. The 18-year-old is hoping for surgery to help offset symptoms of Tourette syndrome. 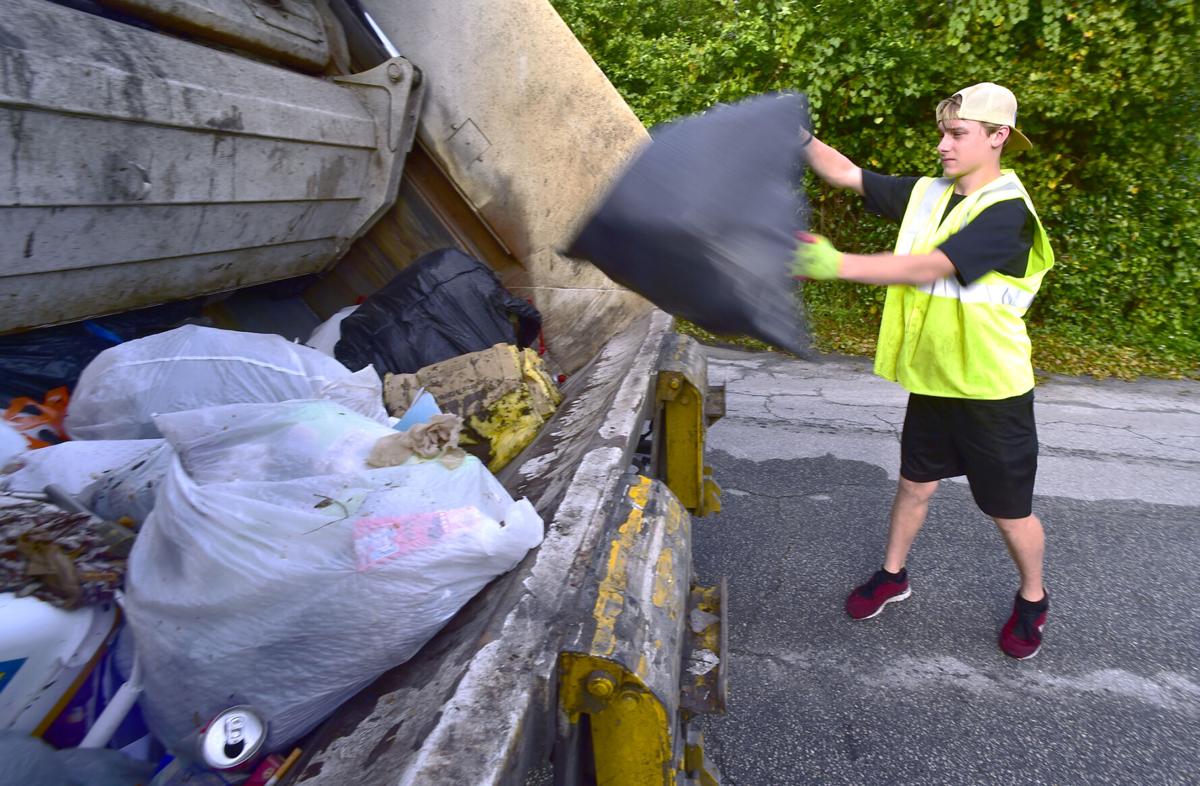 Jeremy Schreifels tosses garbage into a Flash Trash truck Wednesday, Sept. 22, while working in Homosassa. The 18-year-old is hoping to undergo a surgery to help offset symptoms of Tourette syndrome.

Eighteen-year-old Jeremy Schreifels tosses a bag of trash into Flash Trash truck Wednesday morning, Sept. 22, while on a route in Homosassa. The teen is hoping for a unique surgery to offset the effects of Tourette syndrome.

Jeremy Schreifels climbs into the Flash Trash truck he works from Wednesday, Sept. 22, while working in Homosassa. The 18-year-old is hoping for surgery to help offset symptoms of Tourette syndrome.

Jeremy Schreifels tosses garbage into a Flash Trash truck Wednesday, Sept. 22, while working in Homosassa. The 18-year-old is hoping to undergo a surgery to help offset symptoms of Tourette syndrome.

On most weekdays, 18-year-old Jeremy Schreifels is up hours before dawn, getting prepared to toss trash cans into a Flash Trash garbage truck on his daily route.

It puts money in his pocket and takes his mind off his journey toward finding relief from a severe case of Tourette syndrome that he has suffered with for nearly 16 years.

Since May, the community has come together to raise more than $245,000 to pay for Deep Brain Stimulation (DBS) surgery and the related follow-up costs.

His health insurance won’t cover it because it’s still considered experimental for Tourette syndrome, although it has been approved for Parkinson’s disease.

Raising the money, however, was just the first phase in the process.

Jeremy began the second phase this past week when he and his parents, Ronnie and Jennifer Schreifels, met with a team of doctors at UF Health Shands Hospital for two days of consultations and other assorted appointments with doctors, therapists and a psychiatrist, after which they were presented with a plan for the next phase leading up to the day of surgery.

“I had all my questions answered and my fears relieved,” Jennifer Schreifels said.

The first doctor, a DBS specialist, explained the surgery procedure, which involves implanting an electrode deep within the brain to deliver stimulation that is controlled by a pacemaker-like device placed under the skin in a person’s chest.

A wire traveling under the skin connects the device to the electrode.

“That was freaky,” Mrs. Schreifels said. “The doctor said they’ll put a halo on top of Jeremy’s head that’s secured by bolts at each temple and then they’ll make two incisions on top of the skull to insert the leads (electrodes) into the brain; that’s what offsets whatever it is that makes his body ‘tic.’

“The whole time the doctor was telling us, I was holding the device in my hands,” she said.

Jeremy said everything was intimidating and overwhelming but that he, too, had all his questions answered.

"The most reassuring thing was learning that if, during the surgery, my tics get so bad that they can't do the surgery, they can put me to sleep and do it. But it's preferred that I'm awake."

On the ride up to Gainesville this past Monday morning, Jeremy was a little nervous, but his tics were relatively mild.

On his worst days, his tics might cause him to jump, or his arms to jerk, his shoulders to shrug or his head to turn, almost like he’s being slapped or punched in the face by an invisible hand.

Sometimes his tics are so severe that he gets hurt — tripping and falling, hitting his head on something, crashing into things.

He’s currently taking a combination of meds that calm the tics, but that also leave his emotions flat, with occasional bursts of anger.

But on Monday, he was calm in the car as he talked with his mom and dad.

“As soon as the doctor started talking about Tourette’s, Jeremy started getting wiry,” Mrs. Schreifels said. “And then when the doctor talked about the halo, he started ticking really bad. I told the doctor, ‘He wasn’t like this until we came in here,’ and then he explained that anxiety aggravates the Tourette’s, which we knew.”

Another doctor had previously told them that although the DBS procedure stops the tics, it doesn’t take away anxiety.

“On Monday, the doctor explained that the anxiety is caused by the tics, so if we take away the tics, the anxiety goes down,” Mrs. Schreifels said. “That made me feel so much better.”

As Jeremy explained it, the anxiety he feels with Tourette syndrome isn't the run-of-the-mill worrying about things, although that's part of it.

He said it's more of a physical thing. He starts "ticking" and that triggers thoughts of "how bad will this get? How long will this last?" That makes the tics worse.

Another fear Mrs. Schreifels had was the possibility that the DBS surgery would somehow alter Jeremy’s personality.

Again, the doctor assured her that even if that happens, the device can be turned off, adding, “It’s not going to change him.”

After the second day of appointments, the Schreifels returned to Citrus County with hope, but still with challenges ahead of them with the next phase: months of weekly appointments, including with a psychiatrist and an occupational therapist.

“I’m glad we got to talk to the psychiatrist because now I know Jeremy will have comfort and somebody to talk to,” Mrs. Schreifels said.

Before the surgery can take place, Jeremy needs to be able to reduce his anxiety and calm his brain so the surgery has a better chance at being successful.

One way is through Cognitive Behavioral Therapy (CBIT), which trains a person with Tourette syndrome to be aware of their tics and the urge to tic, then learning and practicing competing behaviors to replace them, and also making changes in daily activities that help reduce tics.

Another constant issue is with the medications Jeremy takes, trying to get the exact “cocktail” right that allows him to live his everyday life and be able to sleep at night, and that won’t make him feel like a zombie or an angry monster.

Jeremy said his goal is to get off medical cannabis, which he has been taking since he was 14.

"I want to go into law enforcement, and I can't do that if I use medical marijuana," he said.

The surgery date hasn’t been set, but it will be in the spring.

Meanwhile, Jeremy is hoping to enroll in the Citrus County Sheriff’s Office law enforcement academy as soon as he can.

On Oct. 5 he plans to go to an introductory meeting to see what it's all about.

He said he's positive and hopeful.

"That's my message to everyone," he said. "Stay positive and never let your struggles take you over."

“We’re so grateful,” Mrs. Schreifels said, “and we’re hoping that the support system that has surrounded us will continue to be with us and that people who pray will continue, because we need it.

“Every time something really bad happens, when Jeremy has some bad days, we’ve seen that when people are praying, he comes around and we have another couple of good days,” she said, adding, “It’s stressful, but every morning when I get into my car at 3:30 a.m. to go to work, I thank God for everything he’s given us. I know we’re going to do this. I know everything will be fine.”