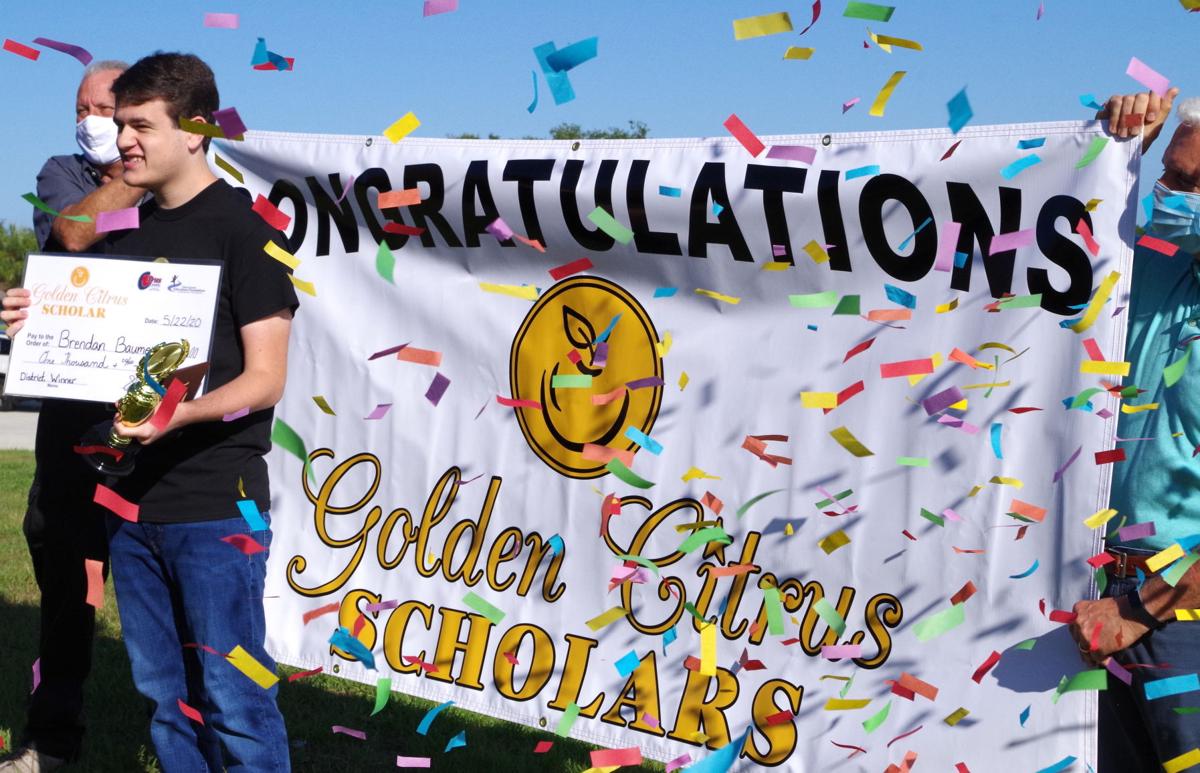 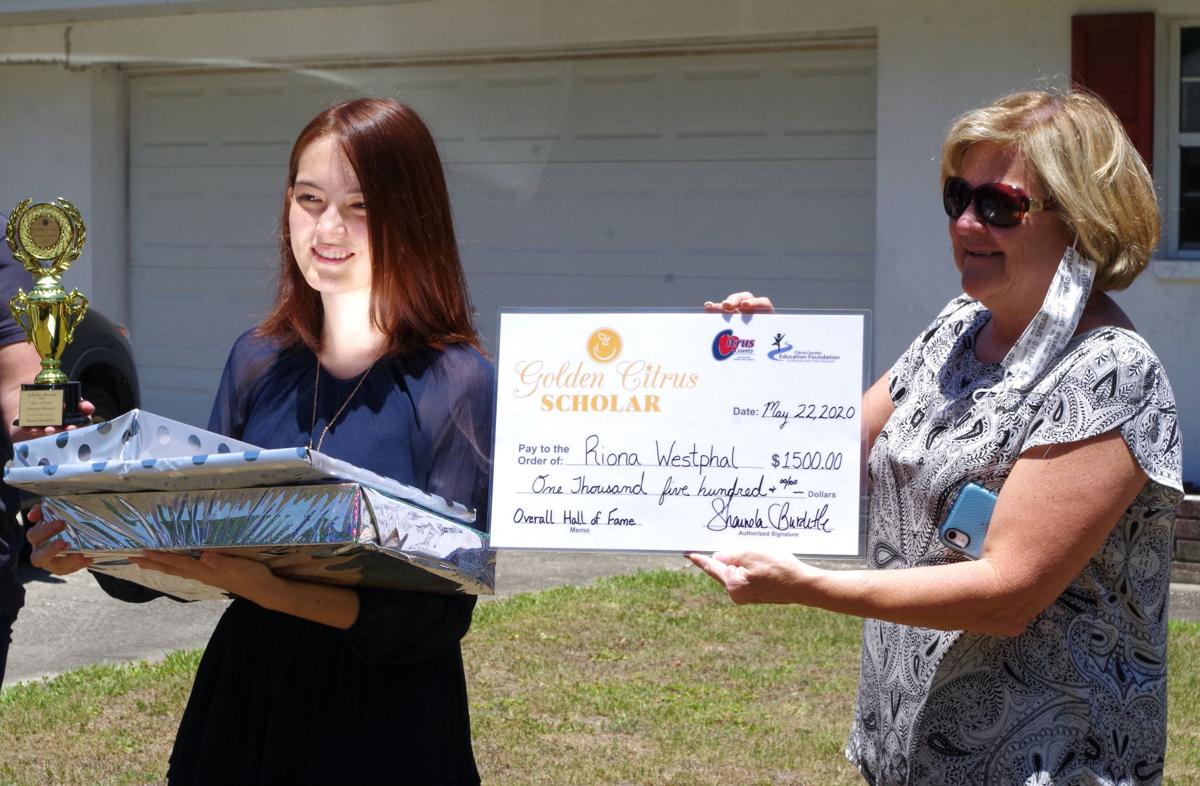 Citrus County Superintendent of Schools Sandra "Sam" Himmel presents Lecanto High School senior Riona Westphal on Friday with a $1,500 education stipend for being the overall Golden Citrus Scholar for the class of 2020. Westphal was also awarded a laptop donated by Coca-Cola Florida. 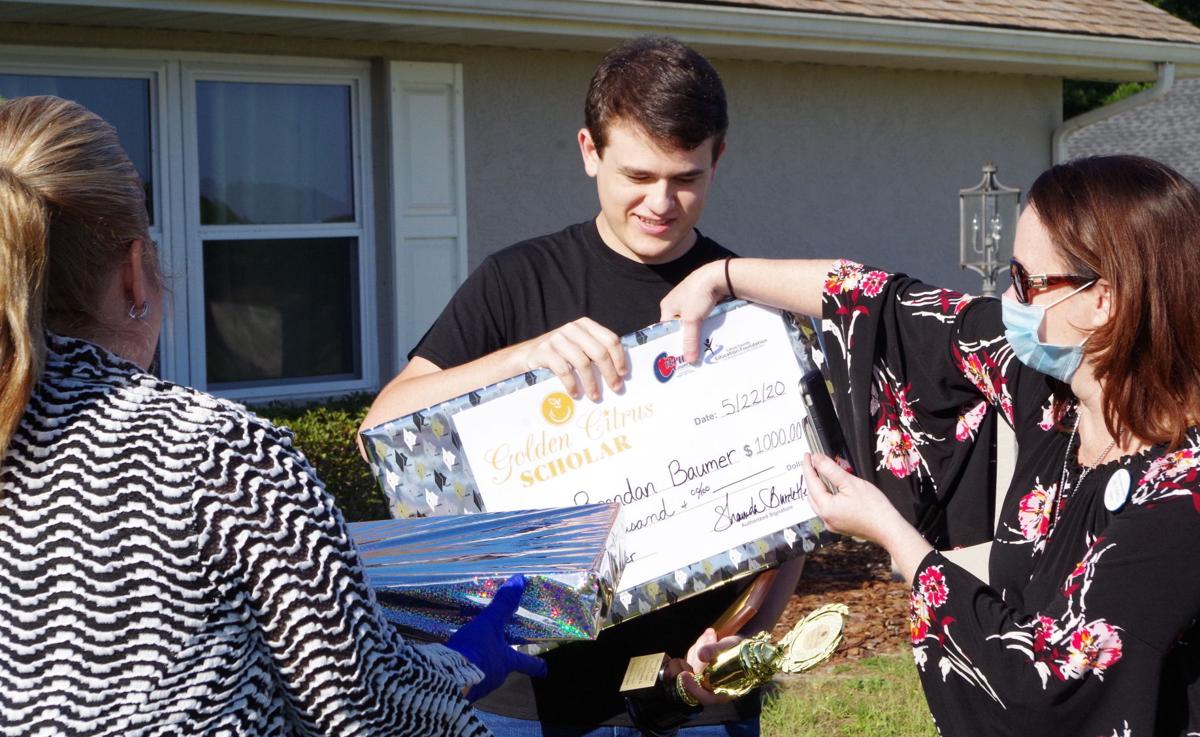 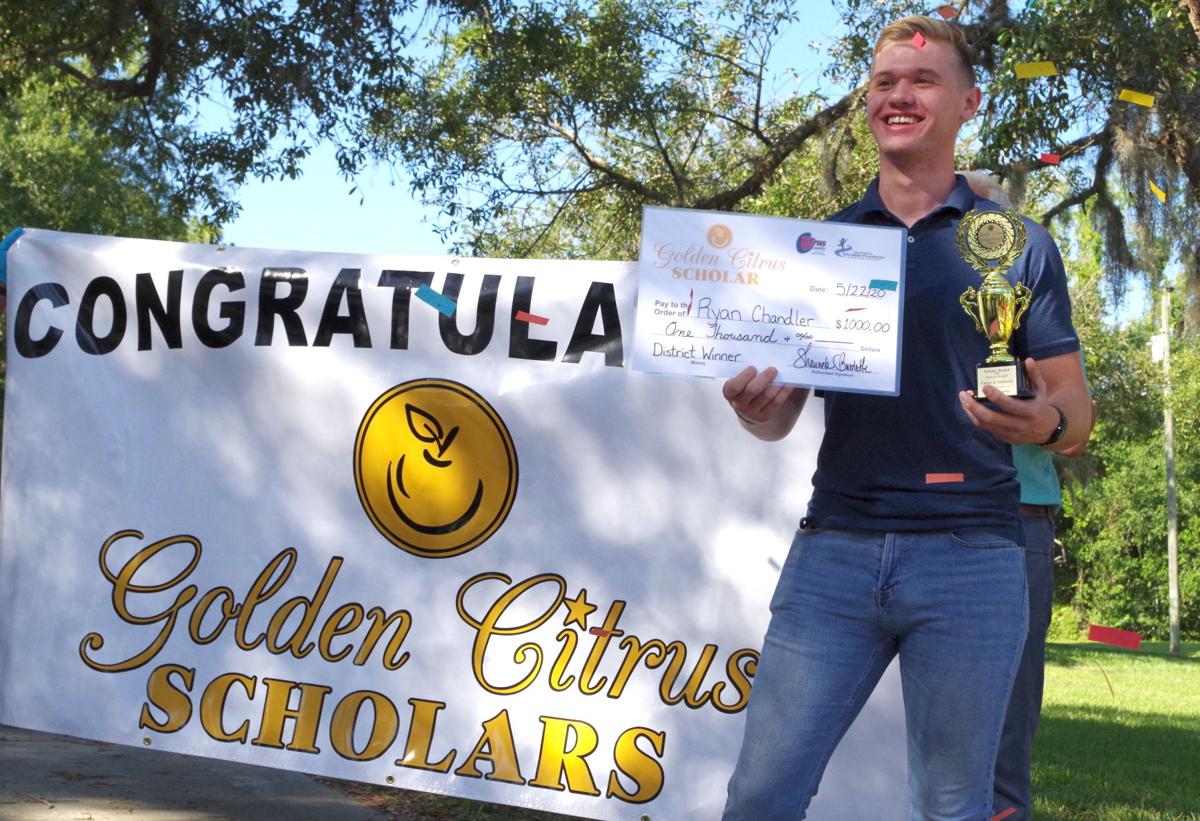 Ryan Chandler, of Citrus High School, poses for photos Friday outside his home after being named the 2020 Citrus Golden Scholar in the career and technical category. 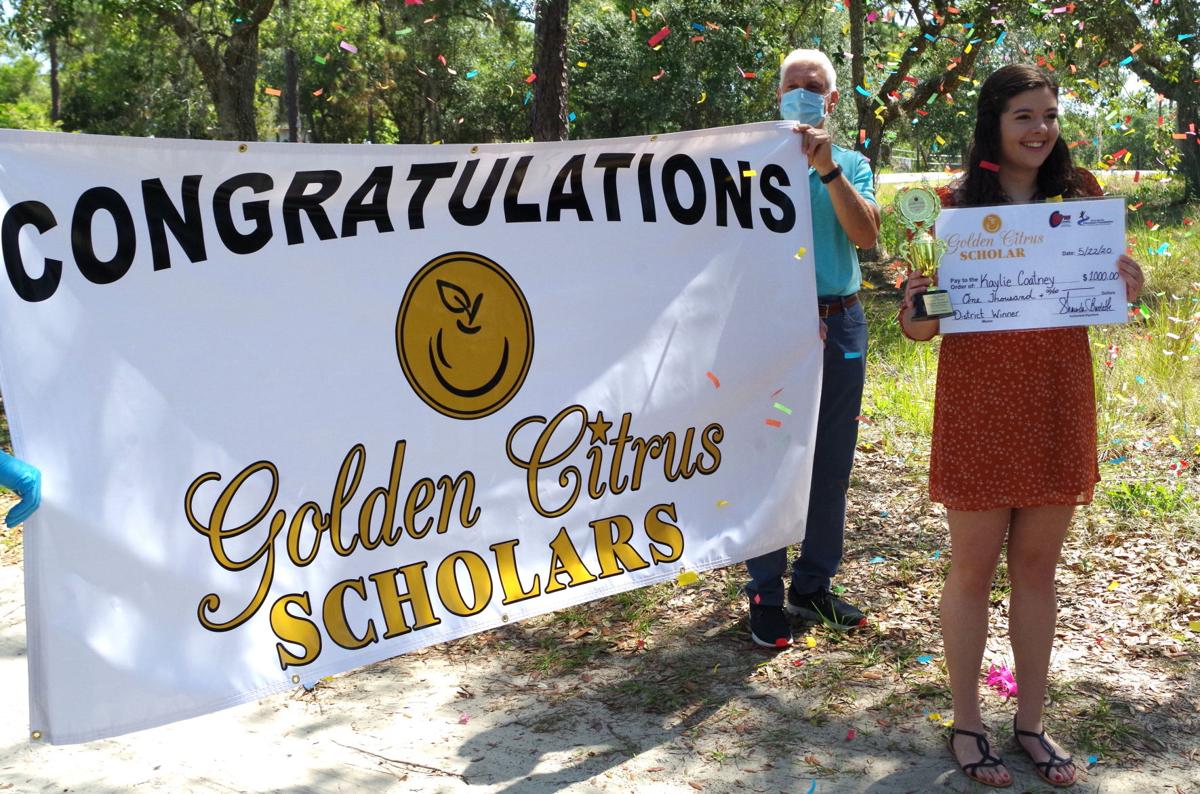 Editor's Note: This story was updated with information about one of the Golden Citrus Scholars.

Citrus County’s top students got a surprise when school officials and advocates stopped by their homes in a bus for a congratulatory send-off, filled with balloons and confetti.

Golden Citrus Scholars traditionally celebrate their impressive high school accomplishments during an end-of-year banquet, but COVID-19 changed those plans for the class of 2020.

However, the Citrus County School District and Citrus County Education Foundation weren’t going to let this year slide without recognizing their best pupils in eight scholastic categories — from “Fine & Performing Arts,” to “Mathematics & Engineering” and every subject in between.

On Wednesday and Friday, school district administrators and education foundation (CCEF) board members rode on school buses to award their successful students in-person.

“It’s a way we can honor the best of the best of our students, who deserve the recognition they’re receiving,” Superintendent of Schools Sandra “Sam” Himmel said Friday, “and what more of a personable way to do this than by taking it on one-on-one...seeing the families, seeing the kids and getting so excited to where everybody can wish the best for their next step in life.”

“It was very important to us as the education foundation to make sure those students know how valued they are,” CCEF Executive Director Shaunda Burdette added. “They represent the hard work of all our teachers, paraprofessionals, coaches, administrators and of course our superintendent and school board.”

Crystal River, Lecanto and Citrus high schools nominated 24 graduating seniors earlier this year for their high marks in the classroom, on standardized tests and in neighborhoods.

“It’s kind of like the Academy Awards for our school district and high schools,” Burdette said.

From those nominations, the school district and CCEF named 10 category winners, including Lecanto High’s Riona Westphal as their overall Golden Citrus Scholar.

Riona attained a GPA of 4.0, a weighted GPA of 4.8 and 213 hours of community service. She scored a 1490 on the SAT, a perfect 36 on the ACT and is planning to major in chemistry at Columbia University before attending medical school.

At bus stops on the front yards of Golden Citrus Scholar winners and nominees across the county, riders from the school district and CCEF handed students diploma frames, handmade masks from the Sowing Sisters of Crystal River and a total $17,000 in educational stipends donated by several community members.

Coca-Cola Florida also donated laptops to the 10 category winners to help them in future studies and endeavors.

“A part of what we do is give back to our local community,” manager of Coca-Cola Florida’s public affairs and community relations John Mitchell said, joined by Coca-Cola Florida Territory General Manager Todd Frampton.

Patrick Simon, founder and president of the Citrus County Coalition for Colleges and Careers, also spent time with the Golden Citrus Scholars to make sure they have what they need to pursue their dreams after high school.

Burdette said the house visits gave her another perspective inside the students’ upbringings, and a chance to have a talk with parents and caregivers. Burdette said CCEF might considered busing Golden Citrus Scholars their awards every year.

“It was special, just special,” she said. “It was a remarkable way to showcase the talent of Citrus County and the hard work and collaboration of everyone here.”

“It’s been fun,” Himmel added. “It’s an eyeopener for many people in our community to see the accomplishments and great things are kids can do and will continue to do.”

Visit citruseducation.org to learn more about the Citrus County Education Foundation and the nonprofit's many services and programs to assist local students and teachers.

English Literature/Journalism: Kaylie Coatney, of Lecanto High School. Coatney is a National Merit Scholar finalist, has a GPA of 4.0 and a weighted GPA of 4.7. Coatney scored a 1470 on the SAT, and is planning to continue education at University of Florida before studying to become a lawyer.

Fine & Performing Arts: Kessid Vonderhaar, of Lecanto High School. Vonderhaar has a GPA of 3.9 and a weighted GPA of 4.7. Vonderhaar scored a 1400 on the SAT, a 30 on the ACT and is pursuing a career in pediatric endocrinology at the University of South Florida Honors College.

Leadership & Service: Raj Shah, of Lecanto High School. Shah has a GPA of 4.0 and a weighted GPA of 4.8. Shah scored a 1400 on the SAT, a 35 on the ACT, completed 423 community service hours and is planning to become a U.S. Navy Nuclear Surface Warfare officer by majoring in electrical and computer engineering and public policy at Duke University

Mathematics & Engineering: Ethan Antonio, of Lecanto High School. Antonio has a GPA of 4.0 and a weighted GPA of 4.9. Antonio scored a 1460 on the SAT, a 32 on the ACT and is planning   to become a nuclear surface warfare officer with the U.S. Navy.

Science: Isabel Huerta, of Crystal River High School. Huerta has a GPA of 4.0 and a weighted GPA of 4.6. Huerta scored a 1290 on the SAT, a 29 on the ACT and is planning to major in biomedical engineering at the University of South Florida.

Science: Diana Ward, of Citrus High School. Ward has a GPA of 3.9 and a weighted GPA of 4.7. Ward scored a 1240 on the SAT, a 26 on the ACT and is planning to major in microbiology and immunology at the University of Florida.

Social Studies & Civics: Brendan Baumer, of Citrus High School. Baumer has a GPA of 4.0 and a weighted GPA of 4.6. Baumer scored a 1500 on the SAT, a 35 on the ACT and is planning to major in mechanical or computer software engineering at either the University of Florida or University of Central Florida.

Career/Technical: Ryan Chandler, of Citrus High School. Chandler has a GPA of 3.9 and a weighted GPA of 4.6. Chandler scored a 1090 on the SAT, a 23 on the ACT in his freshman year before obtaining his associates degree in criminology at the College of Central Florida. He's planning to work as a Citrus County Sheriff’s Office deputy after training at the Withlacoochee Technical College.

World Languages & Foreign Studies: Emma Skelhorn, of Lecanto High School. Skelhorn has a GPA of 3.9 and a weighted GPA of 4.8. Skelhorn scored a 1410 on the SAT, a 32 on the ACT and wants to continuing studying Spanish for later explorations in Latin America.

If there is any doubt that the Citrus County school system produces great students, take a moment to look at Marshall King of Lecanto High School.

Gwen Bittner: For the Chronicle

Correction: Due to editor error, the winner of the Math & Engineering award was misidentified. Anthony DeSomma was the winner.