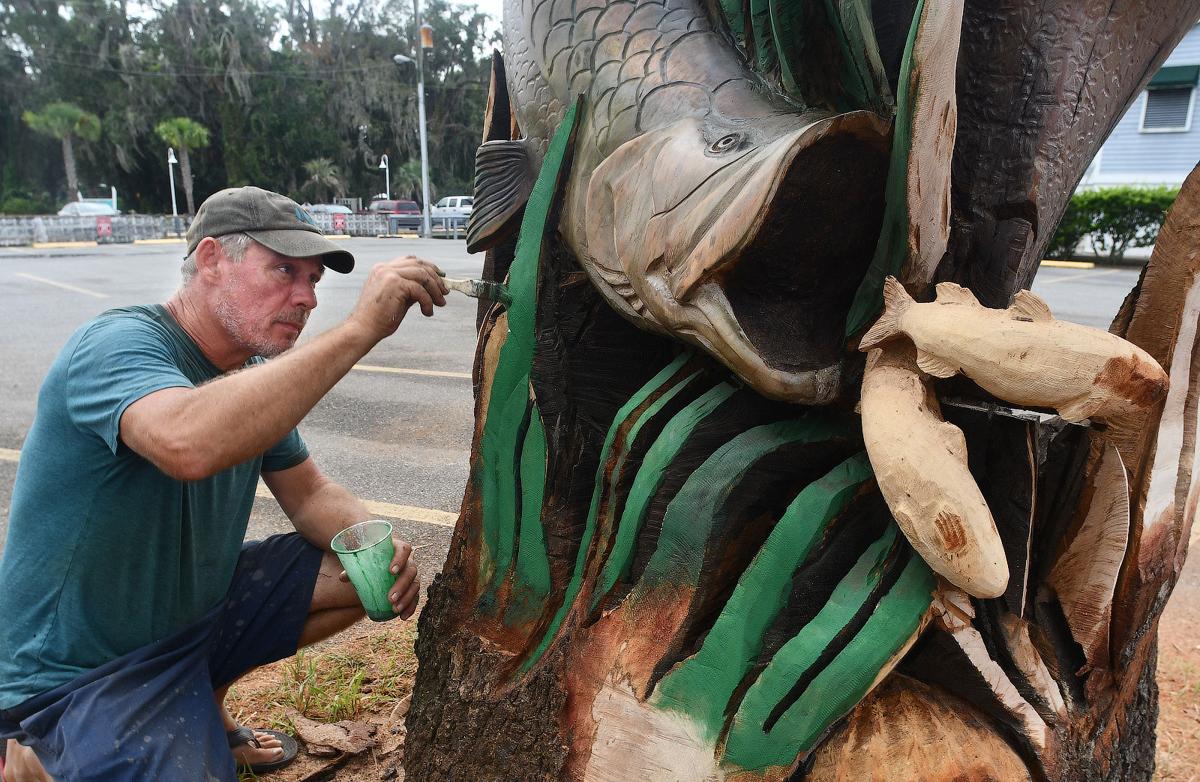 To create the carving Gil Watson used an 18-inch chain saw to create a rough rendition of the artwork and then used more refined tools to create life-like details like scales on a tarpon and lifelike eyeballs. Even before the piece is complete it has attracted attention from many passing by Charlies Fish House in Crystal River. 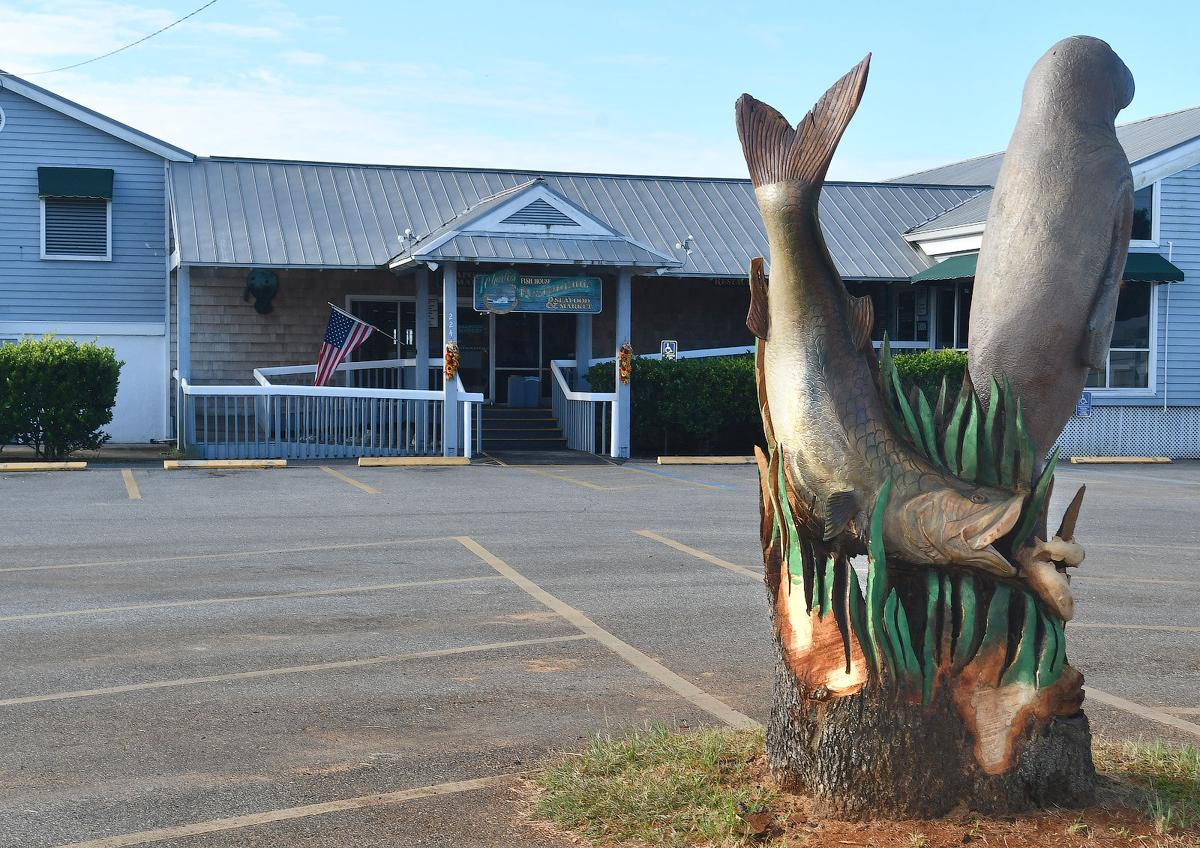 The large wood carving from a live oak trunk stands in front of Charlie's Fish House and Seafood Market along U.S. 19 in Crystal River.

Master carver Gil Watson applies paint to a wood sculpture in front of Charlie's Fish House in Crystal River. Watson, owner of Watson's Art Studio in Homosassa, was commissioned to create the piece and used the giant base and trunk of a live oak tree as his canvas to create a three-dimensional aquatic sculpture. He says with proper care the carving will remain in good shape for several decades or more.

For decades a giant live oak tree has stood in front of Charlie’s Fish House Restaurant and Seafood Market in Crystal River as a landmark for travelers.

This summer the tree was cut down but a portion of it will live on thanks to an intricate wood carving created by local artist and master carver Gil Watson.

“It had just reached the end of its life,” Watson said of the oak. “It was dying from the inside out.”

Watson, 55, is a South African native and has lived in the U.S. for nearly 30 years owning a number of art galleries around the U.S., including Watson’s Art Studio in Homosassa. “I thought it was a beautiful idea to memorialize this tree,” he said Tuesday morning.

Charlie’s Fish House and Seafood Market owner Phillip Kofmehl, 78, remembers the oak as a boy when his family came to the area following the purchase of the property by his father in 1959.

“As a kid, when I came here I was seven and that tree was here,” he said.

Kofmehl, who owns the business with his wife Carol, believes the tree to be more than 100 years old.

Not wanting the tree to be completely removed Kofmehl said he asked the workers who brought the tree down to leave about 10-feet of the forked trunk standing. He had an idea for the trunk.

That’s when Watson came into the picture by submitting a sketch to Kofmehl of what he calls the “flora and fauna” of the local area.

The carving, now nearly complete, includes a large tarpon feeding on mullet, a manatee and other aquatic life, including long, green tentacles of eelgrass that take on a life of their own appearing to wave in the flowing waters of the underwater scene.

Getting a giant trunk of raw oak transformed into a piece of artwork suitable for a museum takes vision, patience and a delicate touch with, of all things, an 18-inch chainsaw.

Watson, who has created countless wood carvings, explained he chooses the 18-inch saw because it’s powerful enough to handle the required rough-cutting work but is light enough to handle by hand from a ladder hours at a time. Working in the summer on a slab of asphalt complicates the process he says, only allowing him to work about 4-hours a day.

“Chasing and driving a chainsaw in that heat, up and down that ladder...I’ll tell you what, it beats you up,” he said. I’m not 21 anymore.”

After roughing in a basic design with the gas-powered chainsaw, Watson then turns to an angle grinder with a course grit to refine the basic shape of the carving. From there he employees a die grinder for additional shaping and detail work and finishes with hand chisels for fine details.

The artist says one of the obstacles with such a project is his steadfast belief that the work should be complete as one solid piece of wood without adding smaller, separate pieces to the creation.

Gil Watson has carved out a niche within the artistic community. His intricate wood carvings depict incredible detail, and many have been view…

Once the wood-working is complete the painting stage follows. A series of stains and paints adds further contrast and highlights to the creation. Finally a spar urethane is applied to protect the artwork.

“Oak is such a good wood to work with,” he said. “It’s very maintenance-free.”

The urethane will be applied once, at most twice a year to protect keep the work and keep it looking fresh.

“Something like this, being an oak tree, it could be here for another 40-50 years,” says Watson if the tree is protected properly.

When the work is complete Watson says he will have about 200 man-hours of work in the process.

Gil and Wendy Watson, of Watson’s Art Gallery in Old Homosassa, have innovated a new form of art called the Watson’s 3D System.

Sitting in his restaurant looking onto the parking lot where the wood carving resides, Phillip Kofmehl reflected on the tree that proudly stood on his family’s property for decades.

“We thought it would be a tribute to a faithful, old tree," he said. "It stood there all those many years as a landmark and we didn’t want to see it completely disappear.”

What a wonderful decision by Mr. Kofmehl. I admire that beautiful piece of art every time I drive by. And I’m amazed at the talent it took to create it.