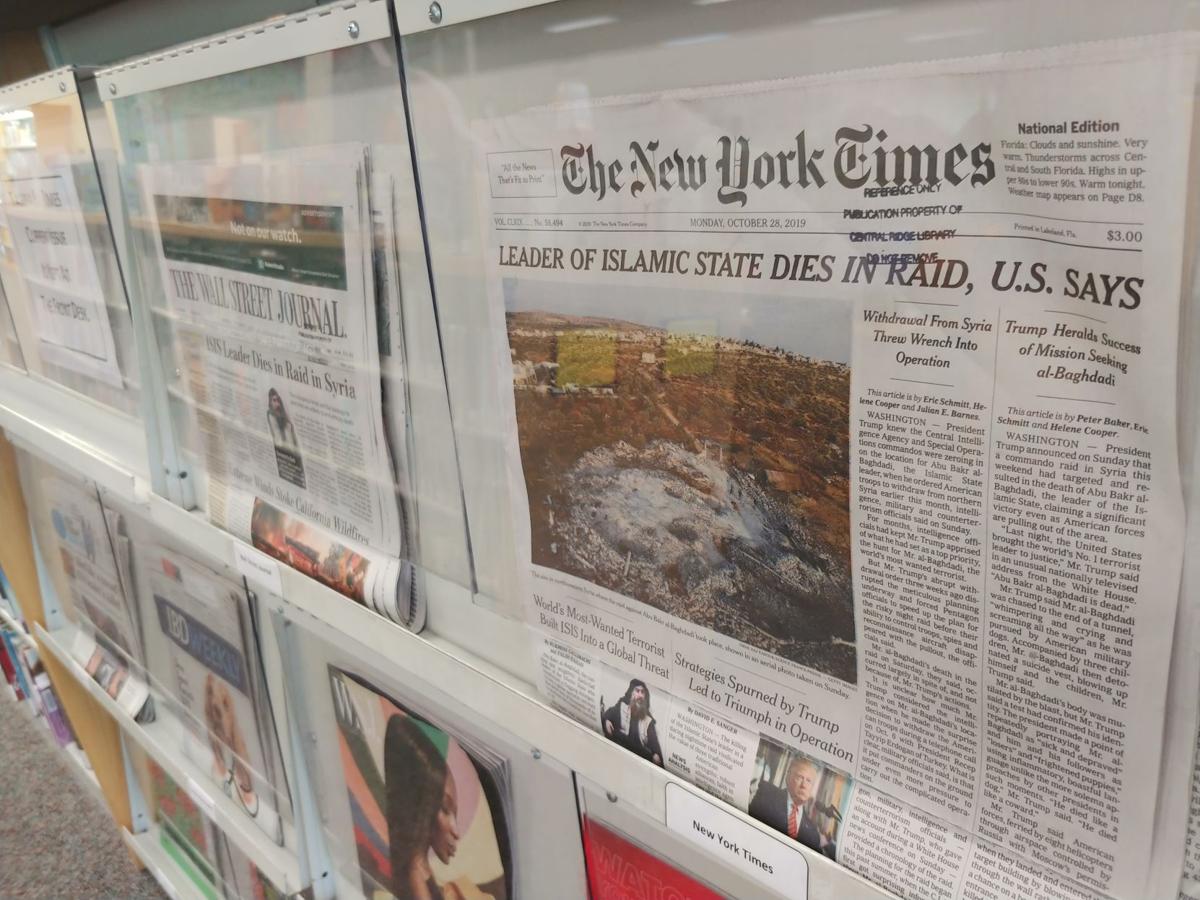 So says the Society of Professional Journalists, Florida Pro Chapter, which sent a cease-and-desist letter to Carnahan for what it said is an improper use of the term.

The chapter shouldn’t expect a response from Carnahan.

“I deleted it,” Carnahan said Thursday. “It doesn’t bother me any.”

Carnahan’s “fake news” comment regarding the New York Times ignited a nationwide uproar over the board’s blocking a $2,700 digital subscription for 70,000 library card holder. Carnahan said he agreed with President Donald Trump that the Times is “fake news” and he didn’t want the newspaper in Citrus County.

SPJ and other organizations chimed in after the Washington Post ran with the story Tuesday morning. Numerous other national media followed, and the result was county phones and emails jammed with comments from across the country.

SPJ Florida has applied to trademark “fake news”, though the organization acknowledges it is doing so “jokingly,” according to a news release where it called upon the county to reverse its direction on the digital subscription.

“Fake news,” the SPJ says, is routinely misused by Trump and others for publications such as the New York Times and Washington Post for which they disagree.

Instead, it should be applied to actual fake news — misinformation purposely spread by individuals and organizations with political leanings.

“‘Fake news’ is a term that should be exclusively used to describe partisan publications that disregard fact, but look like real news stories,” the SPJ release states.

The letter to Carnahan says he is incorrectly using the term and, as it the trademark application is pending, it is SPJ’s responsibility to ensure its proper use.

“You may not be aware, but the widespread misuse of the term FAKE NEWS has greatly confused the American people and shaken their trust in the journalistic community that is so vital to our democracy,” the letter, which SPJ posted on its Twitter page, reads.

“To prevent further confusion, we ask that you immediately cease and desist all references to FAKE NEWS and refrain from using said term as evidence in a misguided attempt to prevent the people of Citrus County from accessing diverse points of view, something that’s crucial to building an informed and engaged citizenry.”

The other four commissioners acknowledged to the Chronicle last week they didn’t read the Times.

Asked this week if he read it, Carnahan said, “I have.”

However, when a reporter asked the last story he read or the topic, Carnahan said he didn’t remember. He also could not provide a single example of “fake news” in the New York Times, other than he knew it had something to do with Trump.

The SPJ letter jokingly suggests it will “pursue legal action” against Carnahan if he does not stop using the term.

“But of course this is satire — which is very different than what you refer to as ‘fake news,’” the letter to Carnahan states. “It might be asking too much for you to realize the difference.”

How to spot fake news

• Google the headline: "If no one else is reporting these AMAZING revelations, they’re probably not true. Let’s face it, if Hillary Clinton has dementia or President Trump’s once killed a guy, it would be covered by more than one reporter.

• Google authors: "Are they even real people? If so, what else have they written? You don’t need to read everything they’ve ever done. Just look at the Google search results. If everything an author has written is on the same topic or covers only one political outlook, little to none of what the article says is likely accurate. Most legitimate reporters cover more than one kind of story, and since neither side of any issue is always right, their coverage includes criticism of everyone at some point."

• Click on the links: "Sloppy fake news offers no links to other sources to back up their claims. So, if there are none at all, be wary. Regular fake news does indeed link to other stories — usually their own, which is a clue that you’re stuck in a feedback loop. Devious fake news links to legitimate mainstream media — but the links have nothing to do with their own story. These fake news geniuses know most readers will click a link and never read the story.

Chronicle reporter Mike Wright will discuss the New York Times digital-subscription issue with hosts of The Florida Roundup, at noon Friday on WUSF, 90.1 FM, and other National Public Radio stations in Florida.

Carnahan isn't up for reelection for a couple of years. He hopes everyone will forget that he made a fool of himself and this county by 2022. Let's prove him wrong.

Carnahan seems to be an expert on creating Fake News himself. Or did I get it wrong that even the address he had "obtained" to be voted for was "Fake News". So what do you expect from a liar anyway ?

one move: vote him out!

I guess that Scotty Carnahan can kiss goodbye to any dreams that he might have to hold any further public office anywhere in North America ........

He'll still get elected in Gooberville.

Come on, Chronicle, Trumpistas know that which is being called "fake news" isn't fake news. Trumpistas wallow in ignorance because they are adhered to Trump, "The Chosen One."

Let's face it. The commissioner stepped in it and now he can't get it off his shoe. Can't get away with calling it 'fake pooh', going to have to clean it up.

Carnahan and the rest of the BOCC can keep screaming Fake News!, but guess what--I heard all about them today on National Public Radio. According to Nielsen Audio Fall 2017 ratings, the total weekly listeners for all programming on NPR stations is 37.7 million people NPR's Newscasts, updated live every hour, can now be heard on 947 broadcast stations by nearly 28.7 million listeners and 27 million people access NPR online. But I suppose Carnahan and the BOCC will just call this national news about their labeling of the NYT as Fake News as "Fake", too, and just stick their heads back in the Citrus County sand,

I’m authorizing my county representative to use “fake news” when ever he refers to the NY times. Over the years I’ve heard on the radio or tv “ the new york times is reporting” only to find later they had misrepresented one story or another and lately appear to be so biased in their reporting that they should lose any protections afforded them by the 1st amendment. They are not news, just opinion. Opinion that runs counter to everything this country was founded on

I suppose that you also label the Washington Post as Fake News, even though their reporters, Woodward and Bernstein, exposed Nixon's Watergate plot to the world. Nixon was so enraged at being busted that he called the Washington Post the "enemy of the people"! Sound familiar? The NYT first exposed Hillary Clinton's missing emails, but according to you and Trump, that would be Fake News, too, from the NYT. By the way, do you even know what a Pulitzer Prize is? The NYT has over 150 of them, but apparently that means nothing to you. Learn to Read, Read to Learn!!!

So you don't want anyone to write or speak about their opinions? Seriously? I guess you want the Constitution to be ripped up and want a dictatorship and not a democracy . I guess that would also mean that your precious Sean Hannity, Tucker Carlson, and Ingraham, all opinionated Talking Heads on Fox to be fired, too. After all, their opinions "run counter to everything this country was founded on," (Jeff McDonald, Nov. 7, 2019).

So you heard on fox news that the nut is " fake news". Priceless.