Hundreds of motorists and their occupants line up along County Road 491 east of Beverly Hills during the morning of the first COVID-19 vaccine distribution at the Central Ridge District Park. 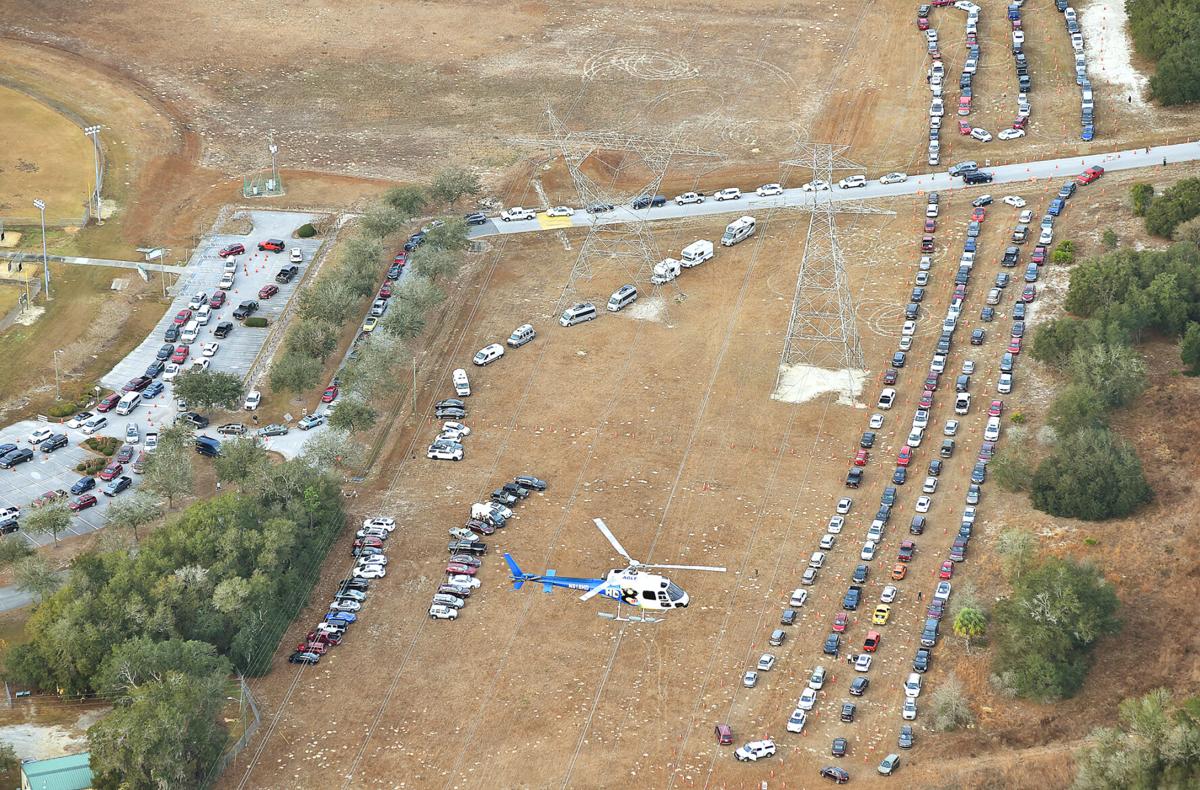 Hundreds of vehicles and their occupants wait for their turn for a COVID-19 vaccination during the first morning of distribution at the Central Ridge District Park near Holder.

Hundreds of motorists and their occupants line up along County Road 491 east of Beverly Hills during the morning of the first COVID-19 vaccine distribution at the Central Ridge District Park.

Hundreds of vehicles and their occupants wait for their turn for a COVID-19 vaccination during the first morning of distribution at the Central Ridge District Park near Holder.

The Florida Department of Health in Citrus County will offer another round of COVID-19 vaccines to people 65 and older.

The drive-thru clinic will give the vaccine to the first 1,000 individuals who come to the event beginning at 9 a.m. Saturday, Jan. 30, at Central Ridge District Park, 6905 N. Lecanto Highway, Beverly Hills.

“Because we got another shipment of vaccine and we continue with our goal to get these vaccines out as quickly as possible, we’re going to have another drive-thru Saturday,” said Audrey Stasko, DOH’s spokeswoman in Citrus County.

The vaccination clinic will follow a first-come, first-served process in which vaccinations are given to those people who arrive first and while supplies last.

But there will be some changes from the previous DOH vaccination clinics at the park.

Stasko said there have been problems with people parking along County Road 491 outside the park the night before vaccination events or several arriving hours early. The DOH in Citrus County asks people not to show up early, but that has resulted in many people who arrive on time getting frustrated when many people are ahead of them and the DOH runs out of doses, Stasko told the Chronicle.

So Stasko said this time local law enforcement will keep people from parking overnight or arriving hours early along County Road 491 or from blocking the park’s entrance.

“No overnight parking will be permitted. The Citrus County Sheriff’s Office will monitor the area and be taking enforcement action if necessary,” Stasko told the Chronicle in a news release.

Vehicles will be allowed entry to the park starting at 7 a.m. to begin staging for vaccinations, the release stated. Access to the park must come from the south, and vehicles will only be permitted to make a right hand turn into the park. Motorhomes and vehicles pulling trailers will be turned away due to height restrictions, Stasko wrote.

Each person must bring a valid Florida ID and plan to be in Citrus County to receive their second-round shot, 28 days after their first dose. Seasonal residents may demonstrate residency consistent with the criteria set forth in 381.986(5)(b), Fla. Stat.

Regardless, Stasko said there are no guarantees that a person coming to the event will get vaccinated.

Meanwhile, the Florida Department of Health continues to work on a statewide program whereby Florida residents can schedule and make appointments for vaccinations. But until then, only Publix is accepting appointments in Citrus County when vaccine supplies are available.

Stasko also said people getting the vaccination Saturday will get an appointment card showing when and where they are to get their second dose.

Stasko said those people must bring their appointment cards and will not receive their second dose without it.

“They have to bring them. That’s your golden ticket. Don’t lose it, and bring it to your second dose appointment,” she said.

People who received their first dose at the DOH’s vaccinations Jan. 5, 7 or 9, will get a postcard telling them when and where to get their second dose. Bring the postcard with you for your second dose.

Only the Moderna vaccine will be given at this time, she said.

Prior to receiving the vaccine, individuals will be required to complete the Department of Health COVID-19 Vaccine Screening and Consent. That form can be found at citrus.floridahealth.gov/_files/_documents/FINALModernaVaccineScreeningandConsentForm12.20.20xx003.doc.pdf.

A Moderna Fact Sheet with information on what to expect during and after the injection will also be given before receiving the vaccine. There will be consent forms available on site for those who do not have access to the computer, or you can visit any Citrus County library to print the form at no cost.

Individuals are encouraged to contact their primary care provider about whether they should receive the vaccine, Stasko said. After receiving the vaccination, recipients will be asked to remain on-site for 15 minutes for medical monitoring.

As more vaccines become available, additional dates, locations and ways to receive the vaccine will be announced, Stasko said. Information regarding availability and future vaccine clinics will be shared with local media outlets, posted online at www.CitrusCountyHealth.org or on Twitter at @FLHealthCitrus.

Publix grocery stores are offering the vaccinations by appointment as vaccine supplies last, but appointment slots quickly fill up.

“Whether you’re waiting for your computer (for a Publix appointment) or waiting in your car (for your first-come, first-served vaccination), it’s about supply,” Stasko said.

He said by Feb. 1, the COVID-19 vaccine will have been offered to every resident and staff member of Florida’s nearly 700 nursing homes and more than 3,000 assisted living facilities. The governor made this announcement during a visit to River Garden Hebrew House for the Aged in Jacksonville.

But Stasko warns that following the vaccinations, people must continue to take precautions. That includes wearing masks and keeping their social distance.