Bette Paniccia, a CERT volunteer, directs motorists toward a tent where they're to receive the Moderna vaccination Saturday, Jan. 9, at Central Ridge Park. 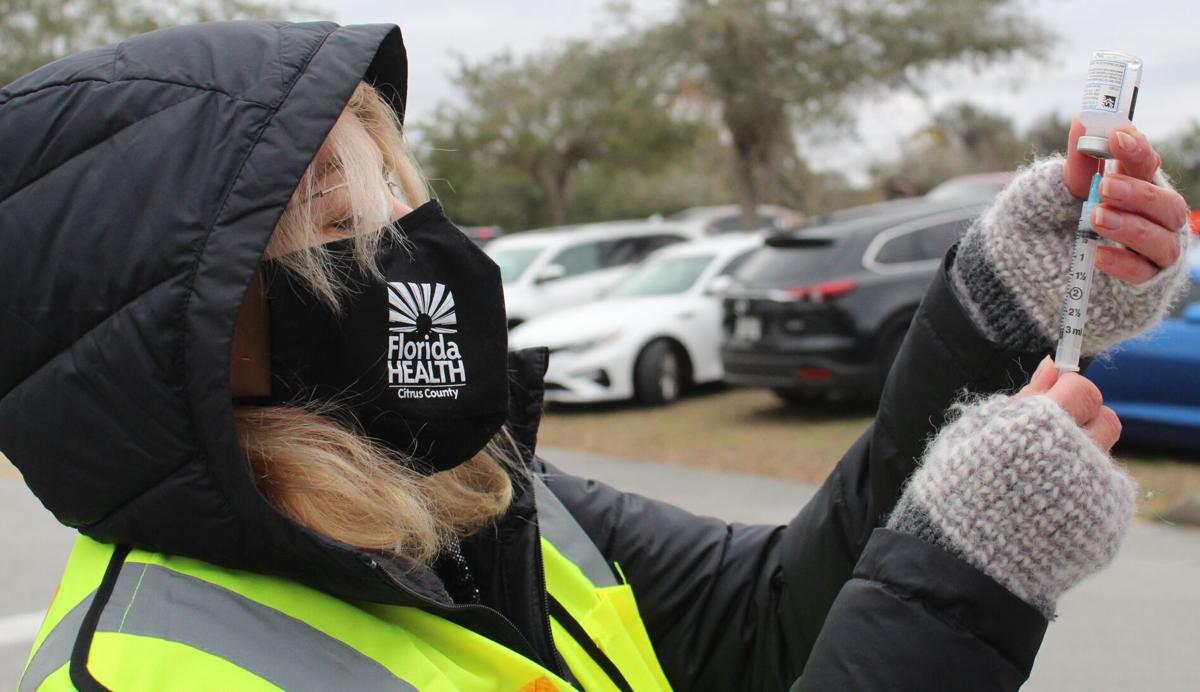 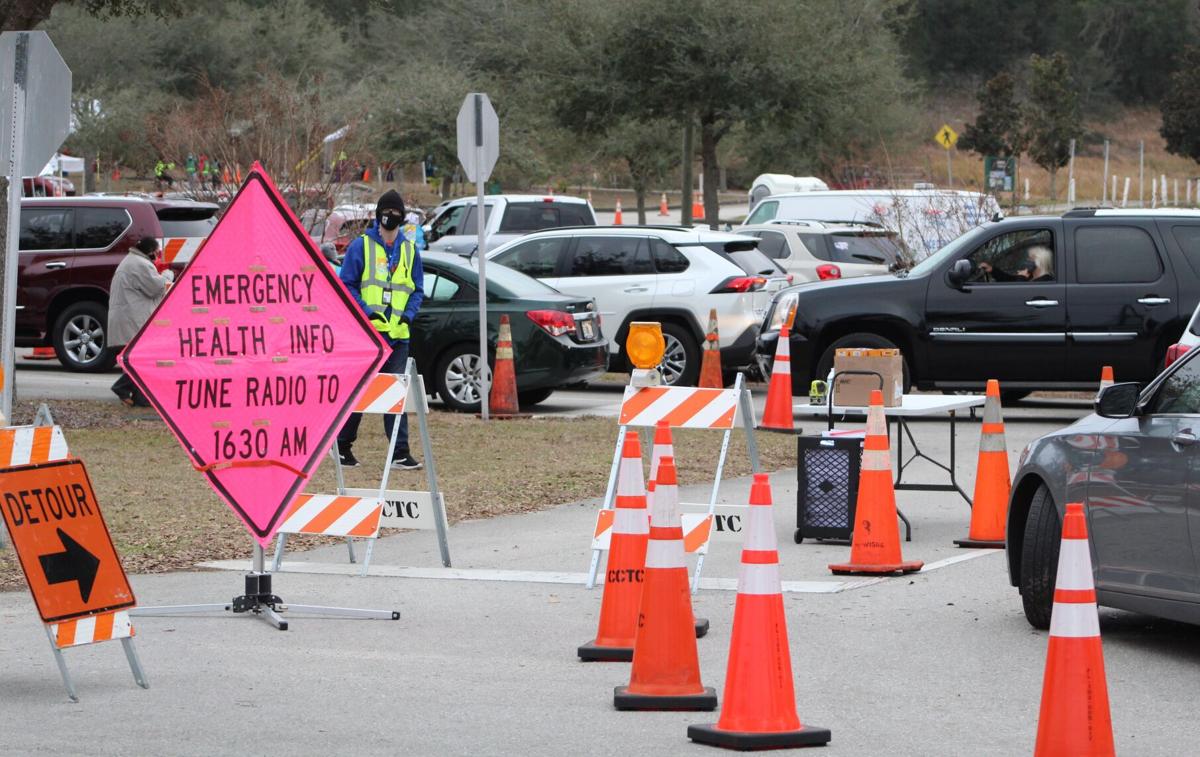 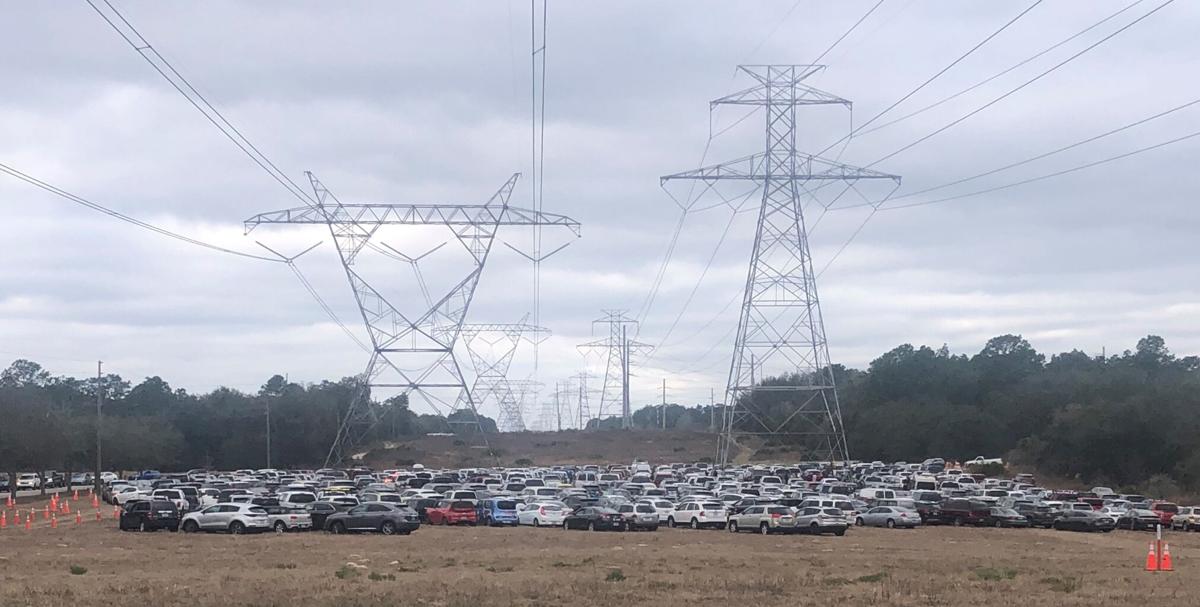 Scores of vehicles mass in a field Saturday, Jan. 9, at Central Ridge Park as residents 65 and older wait for DOH-Citrus to begin offering the first round of the COVID vaccine. The agency provided 1,180 doses to area residents.

Bette Paniccia, a CERT volunteer, directs motorists toward a tent where they're to receive the Moderna vaccination Saturday, Jan. 9, at Central Ridge Park.

Much like Thursday, the lines for the Department of Health in Citrus County’s second drive-thru distribution began forming throughout the late evening hours Friday, Jan. 8, and into the early morning hours of Saturday, Jan. 9, as area residents sought the first of their two doses to combat the novel coronavirus.

Unlike Thursday when DOH-Citrus distributed 800 doses of the Moderna vaccination, which require a second dose in 28 days, the agency distributed 1,180 shots, according to Audrey Stasko, DOH-Citrus spokeswoman.

By 9:55 a.m., the agency had accounted for all vaccinations to be given, turning away those who didn’t make the cutoff despite waiting hours in line along County Road 491. Health department officials wrapped up shortly before 3 p.m, Stasko said.

Stasko confirmed Saturday, those who received their first shot of Moderna from DOH-Citrus, will receive their second shot from the agency, which will receive additional deliveries of the vaccine.

Details about how DOH-Citrus will administer the second dosage are being ironed out, Stasko said.

“We will notify recipients either by phone, the website or through local media outlets,” she said.

Those seeking their first round of vaccines Saturday did so as temperatures dipped into the 40s early in the morning, keeping warm by staying inside their vehicles, sleeping when they could, watching shows on their phones or tablets or reading.

Henry Bormann sat patiently inside his truck, with the heater on, thankful he was one of the first vehicles at the front of the line Saturday; a stark comparison to Thursday, he said, when he was the first vehicle turned away after DOH-Citrus had accounted for all of its doses to be distributed then.

“Disappointed, because you want to get the shot,” he said about Thursday, “but it was good and here I am (today), so it worked out.”

With the Citrus County Sheriff’s Office guiding and directing the flow of traffic into Central Ridge Park, more motorists were able to park inside the county-owned facility as it made use of the open fields under the power lines, said Ernesto “Tito” Rubio, DOH administrator.

“The cooperation between government agencies just surpasses everyone else,” he said about coordination between DOH-Citrus, the sheriff’s office and the county.

With the sheriff’s office leading the way, Rubio said, getting cars into the park was “tweaked a little bit.”

“We learned a lot about how to get the cars inside of the park to keep County Road 491 clear,” he said. “That’s a big boon today.”

The DOH began giving out the shots about 9 a.m. Saturday in a first-come, first-served basis at the county park at 6905 N. County Road 491.

Much like Thursday, hundreds of people were turned away because there weren’t enough vaccines.