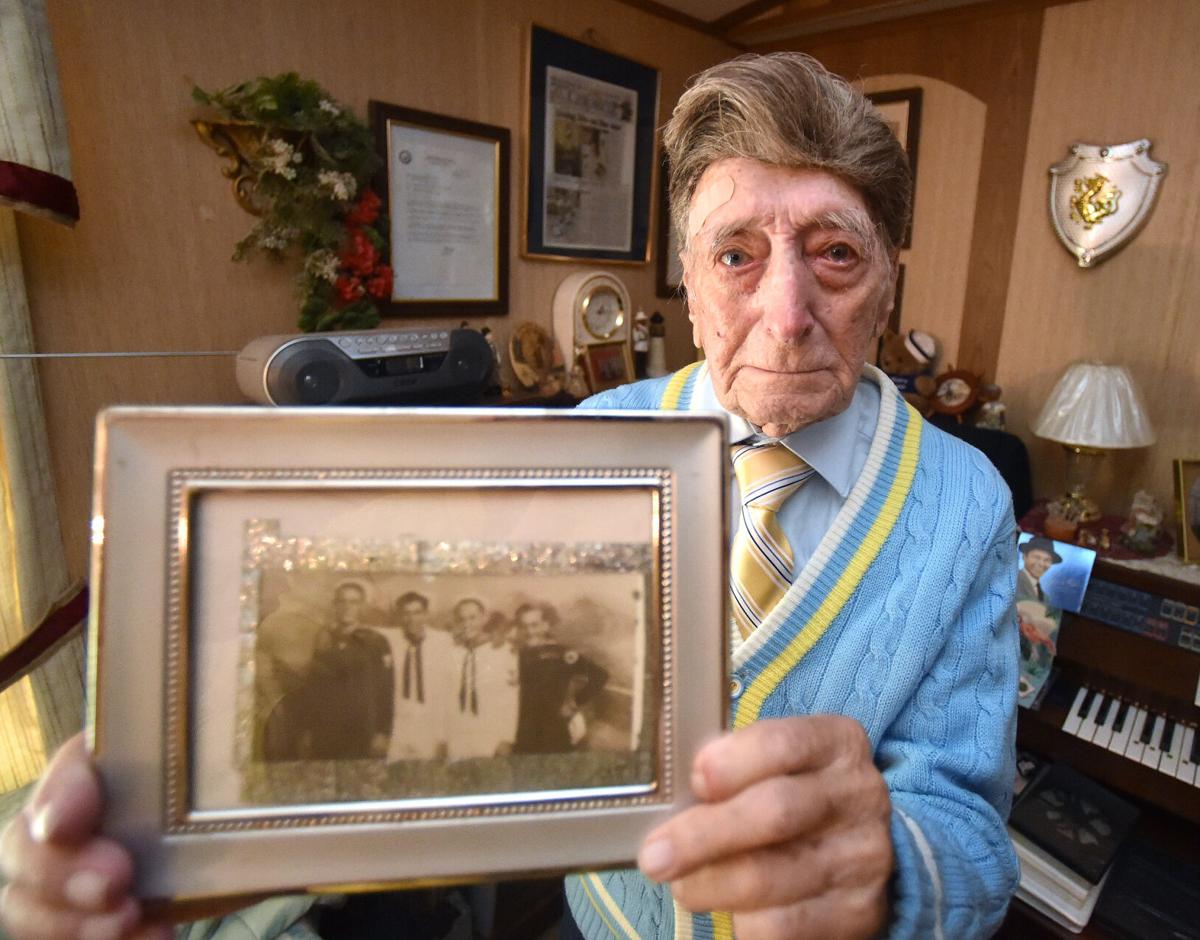 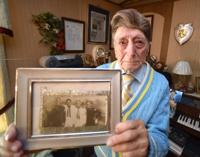 Homosassa resident Nathaniel Davis, 95, holds a photo taken in the early 1940s of himself and three good friends while serving in the U.S. Navy. Davis survived the invasion of Normandy while aboard the USS Hobson. "No one expected us to make it out alive." 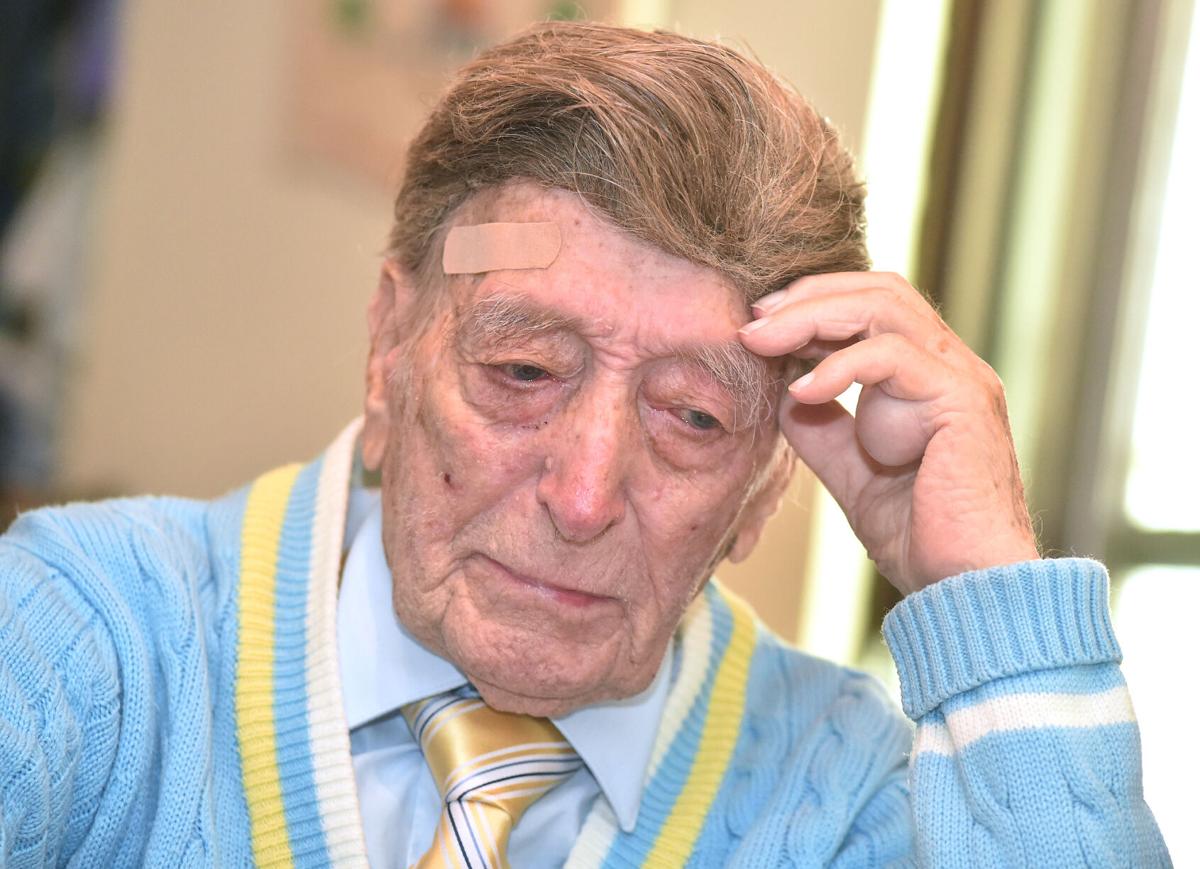 Nathaniel Davis, a 95-year-old Navy veteran, becomes emotional while recounting the war on the beaches of Normandy. "War is Hell," he said with tears in his eyes.

Homosassa resident Nathaniel Davis, 95, holds a photo taken in the early 1940s of himself and three good friends while serving in the U.S. Navy. Davis survived the invasion of Normandy while aboard the USS Hobson. "No one expected us to make it out alive."

Nathaniel Davis, a 95-year-old Navy veteran, becomes emotional while recounting the war on the beaches of Normandy. "War is Hell," he said with tears in his eyes.

Amid the Battle of Normandy, Nathaniel Davis, now 95, was certain that he wouldn’t return home.

“You just thought you were going to die,” Davis said during an interview in his Homosassa home. “You didn’t think any further ahead than that.

“I’ve been in the Navy all my life,” Davis said. “I went from seaman second to lieutenant commander in the Navy.”

In his home, Davis proudly hangs his white service dress uniform on the back of a door. Behind the door is his war room. With a lifetime of service, he treasurers every photo, letter, award and document from his military service.

At just 16, Davis enlisted in the U.S. Navy. At that time, he was living in Jersey City, with the nearest recruiting office in New York. “The place was packed,” Davis said. They told him to come back in a few days and he did.

Before he knew it, Davis was on a bus to Grand Central Station, where he took a train to Newport, Rhode Island. Davis would spend three and a half weeks in boot camp before being assigned to his first station aboard a destroyer, the USS Hobson (DD-464). He would call the USS Hobson home for the next four years.

In the weeks prior to D-Day, Davis took part in exercises and invasion tactics with the crew. Some of Davis’ shipmates gave a written history of everything that happened aboard the USS Hobson in Normandy, which he keeps in a blue folder in his home.

This is an excerpt from their writing, recounting the days prior to D-Day: “We somehow always knew in our own minds, that we were going to invade the German Fortress Europe, invade France. Even then, we did not know when the exact day would be, for it was to be declared by the high command shortly before our hour of departure.”

On June 3, 1944, crew members of the USS Hobson finally learned the role they were selected to play on D-Day. “Destroyers are designed not only to be sea-going, but they protect the biggest ships in the Navy,” Davis said. “When we went in, we were the expendables. No one expected to make it out alive."

On D-Day, June 6, 1944, the mission of the USS Hobson was to load small assault crafts with the first wave of troops toward the beach. When they couldn’t go any further, they would swing to the side and begin their fire on enemy troops.

At the time of the invasion, Davis was a Navy Snipe. “A Snipe in the Navy means an engineer,” Davis said. “I was below decks in the fire room.”

For Davis, the horrors and emotions of that day are still all too real and difficult to recount. “We were scared to death, believe me,” Davis said. “After 70 years. ... It’s hell on earth. War is hell.”

After hours of open fire, the USS Hobson’s sister ship, the USS Corry (DD-463) began to sink after being struck. Davis and his shipmates helped pull the survivors out of the water and brought them to safety, while bullets fired at them from all angles. “We were constantly under attack,” Davis said.

D-Day was just the beginning of the end of the World War II, but Davis said it felt like eternity. He said he feels lucky to have made it out alive. “Those guys that went down — they never had a shot,” he said. “It’s by the grace of God I’m here.”

Another excerpt from Davis’ shipmates’ writing, which recounts the immediate aftermath on the USS Hobson following D-Day, reads: “We recalled the events which had occurred during the previous long hours, thanked the Lord that it was over at last, and pinched ourselves upon occasions, to convince our minds that our bodies were actually still with us, and that we hadn’t gone down in the battle of Normandy, as the odds had seemed to say we would.”

D-Day is just a small part of Davis’ story. As for the USS Hobson, she sunk in 1952 after an accidental collision with the USS Wasp, an aircraft carrier. One-hundred and seventy-six men were lost. At the time, Davis was in the Navy reserve. “By the grace of God, I wasn’t aboard it,” he said.

To this day, Davis stays involved with the Navy, recruiting and educating youths with the United States Naval Sea Cadet Corps. Davis said he swore to himself that if he survived, he would dedicate his life to teaching kids about military service. “If there’s any place to go, it’s going to the service,” he said. “It’s a great crusade.”