As a result of its King's Bay Riverwalk construction, Crystal River will close the popular, city-owned boat ramp in between Bird's Underwater Dive Center and Charlie's Fish House. The ramp offers access to King's Bay and points west to the Crystal River and Gulf of Mexico. 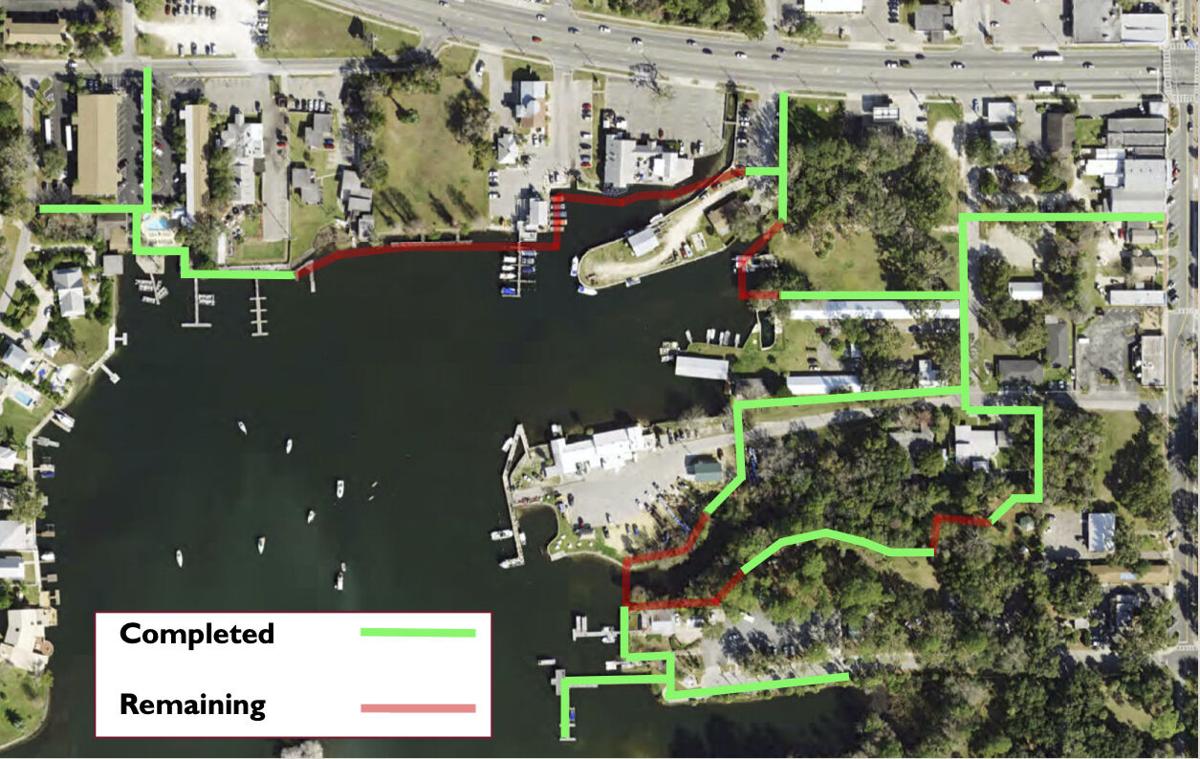 Around 75% of the Crystal River Riverwalk is completed in the city's downtown and along King's Bay.

Crystal River officials wanted to know what people had to say about replacing the city’s boat ramp at the end of Northwest Third Avenue, and the public didn’t disappoint.

It was a two-hour chance for locals to learn about, question and critique the city’s proposal to relocate the boat ramp to one of two locations within the Crystal River Preserve State Park.

After breaking ground later this year, the Riverwalk’s second and final phase is expected to finish in March 2022.

With their boat ramp’s fate determined, city staff searched for another location to build its replacement.

Staffers contacted the Florida Department of Environmental Protection (FDEP), which owns the 27,500-acre preserve, to ask about building a boat ramp within its park.

FDEP leaders asked city staff to host a public meeting to gauge the community backing for replacing the ramp.

If there’s enough local support and the FDEP OKs the location choice, Frink said, city staff will apply for grants to fund the new ramp’s design and permitting.

Without an endorsement from the public and a resulting approval from the state, Crystal River will lose its boat ramp.

If that happens, Frink said he and his staff will try to reassure FDEP a replacement boat ramp will give easier and safer access to the Crystal River and the Gulf of Mexico.

With the Third Avenue ramp, not only do boaters have to encroach on the private properties neighboring the ramp, they have to park on the other side of U.S. 19 afterward, before walking across the four-lane highway to launch their vessel.

Lawrence Wilmer said he doesn’t want to see the ramp go because it’ll restrict access into the bay, including his, as someone who makes a living from the waters.

“I just hate losing a ramp,” he said.

After hearing from city staff that an average of 3.5 boats launch daily from the boat ramp, Mike Engiles, echoed by other open house attendees, asked, “why bother moving it?”

At 27 launches, according to city staff, Labor Day weekend was the busiest day on record for the boat ramp, and an average of 10 vessels launch there on weekends.

Hernando resident Heather Nagy said Crystal River shouldn’t be developing in the undisturbed habitats of the park, damaging the ecosystems of threatened animal and plant species.

“The middle name of the Crystal River Preserve State Park is ‘preserve,’” she said, “and doing this is not preserving."

Jesse Buckley said a boat ramp at the Mullet Hole would disrupt those who fish the popular cove off of Sailboat Avenue and the Indian River Canal, which runs parallel to State Park Drive and many residential canals.

“They’ve been fishing there for generations,” he said, “they’re grandfathered in.”

Husband and wife, Edward and Maureen Elder, who live in a condo off of State Park Drive, said having a boat ramp at the end of their neighborhood street would increase vehicle traffic, making it unsafe for the many who walk and cycle on State Park Drive.

There would have to be a sidewalk built along the roadway, which would also need to be improved to mitigate its regular flooding, Edward Elder said.

Locals living in the Indian Waters subdivision by the state park suggested the city look at ramp locations off of Fort Island Trail or by the Cross-Florida Barge Canal.

Frink said the areas of the state park in question are within city limits, and could provide boaters with faster access to the Gulf.

Frink said the Mullet Hole has enough upland space that can be developed. However, he said, the park's existing boat ramp, which used to be a yacht club, is favored because the site already accommodates what the city is looking for.

If the old yacht club was chosen as its new boat ramp’s location, the city would work with FDEP to redesign the ramp already there so boats aren’t launched right into the river's current, Frink said.

Save the Manatee Club Executive Director Pat Rose told the Chronicle on Friday he supports the Riverwalk and sympathizes with the city’s desire to replace its boat ramp.

Rose is concerned about how many of those boaters who’d launch from the state park would head back east toward King’s Bay, increasing boat traffic and disrupting manatee movements.

He said he wants the city to know what the consequences of a new boat ramp could do, instead of just rushing into it to get grants.

“We need to not just jump at the first thing that comes along,” he said. “I think we need to understand that.”

Crystal River officials say support is there for the city to replace its boat ramp at the end of Northwest Third Avenue.

Citing a lull in COVID-19 infections, Crystal River City Council is comfortable moving ahead with larger city events on a modified scale.

We surveyed 1,000 people who had
The wilderness is calling. Answer It.
GETTING YOU OUT THERE! 16’ BUCCANEER
Voting is going on now for 2021 Best of
BRINGING YOU HOME FOR 37 YEARS Family
Nestled In 100 Year Old Oaks Just Off