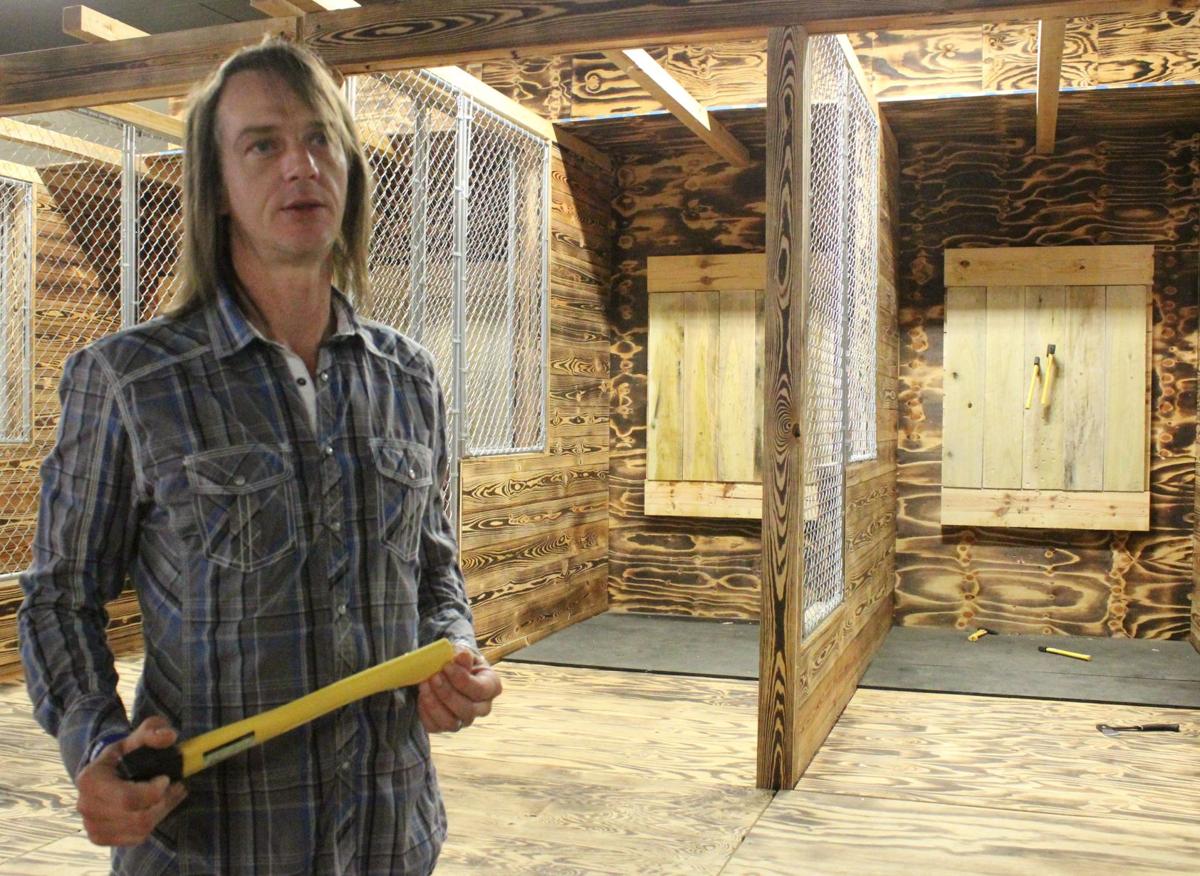 Just Amuse Me! owner Dave Perry believes the axe-throwing section of his indoor entertainment center will prove a hit. 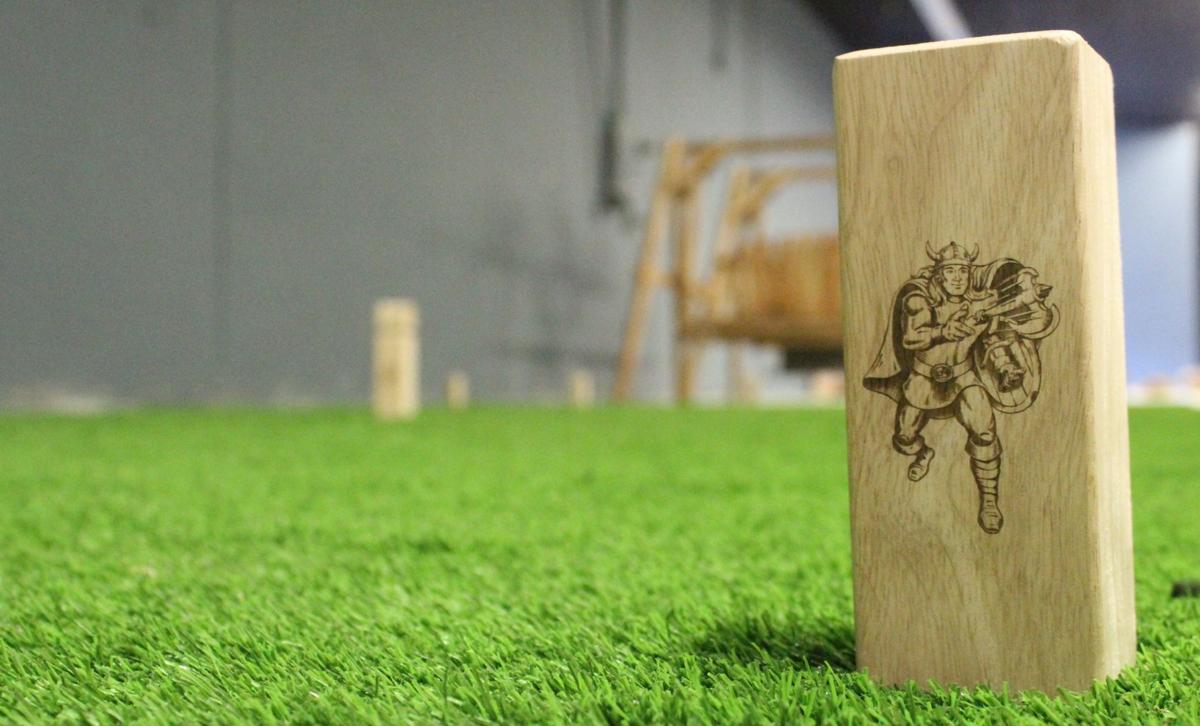 Langley, a Viking-type hero, is displayed on one of the Kubb blocks. This game is a cross between bowling and horseshoes.

Just Amuse Me! owner Dave Perry believes the axe-throwing section of his indoor entertainment center will prove a hit.

Langley, a Viking-type hero, is displayed on one of the Kubb blocks. This game is a cross between bowling and horseshoes.

Anyone for a game of Kubb?

Never heard of it?

Well, learn all about this growing lawn sport at the county's newest indoor entertainment center — Just Amuse Me!.

The opening of JAM was delayed due to the coronavirus crisis. But owner Dave Perry is ready to roll out the first of three phases (he calls them "chapters") and said there is enough social distancing to make everyone happy.

Perry said COVID-19 changed the landscape of Citrus County but he believes people will still come to his place to unwind.

He plans to open the second chapter 30-90 days later with arcades and mini-bowling. The third chapter, featuring electric go-carts and rock-climbing walls, will tentatively debut the first quarter of 2021.

Arcade games, classic and new, will be introduced gradually through each of the first two chapters.

Perry said May 29 will be a soft grand opening.

“We are thrilled to be able to provide the environment where families can come together and create forever moments,” he said.

Dave and Melissa Perry, who also operate Hunter Springs Kayak, said Just Amuse Me! offers another option for tourists and locals looking for something to do after they finish swimming with manatees or scalloping.

He said JAM will make Crystal River a “dynamic destination.”

A comic book fan, Perry chose to represent each chapter of his entertainment center after a superhero fighting off the Dark Suits, who try to rob people of boredom. People come to JAM to have fun and escape the doldrums of everyday life.

For chapter one, he chose the hero Langley, a Viking-type hero, which is apt because Kubb is akin to Viking chess.

A cross between bowling and horseshoes, Kubb is played on a ‘pitch’ where players try to knock down wooden blocks with wooden batons.

In the same room as Kubb, people can walk over to the 12-station axe-throwing competition.

Perry joined the World Axe-Throwing League with hopes of not only lending legitimacy to his venue but also snagging some tournaments down the road.

This sport is gaining popularity across the globe and Perry said people would be hard-pressed to find the game anywhere in the region.

Perry assures people it’s safe for all ages and each station is separated from each other.

Perry believes JAM will attract people from Citrus, Hernando, Levy and Marion counties. He’s working up partnerships for now with mall restaurants to deliver food to JAM customers. Eventually, though, he plans to open his own food concession area where players and visitors can grab a burger or sandwich. He will also have a liquor license. All that is planned for chapter three.

Perry plans to aggressively market his entertainment center. Indeed, he’s already started by reaching out to the cities of Crystal River and Inverness and the county, as well as the Tourist Development Council and chamber of commerce.

He is also forming partnerships with area restaurants and hotels to build synergy in the area.

This will also be a boost for the Crystal River Mall, which has seen top retailers close, he said.

“I see this as a huge catalyst for the mall,” Perry said.

The future, he said, is wide open for more fun and games. For example, batting cages are on his radar.

“It all comes down to space and what the market needs,” he said.

JAM will be an ideal place, he said, for folks to rent space for birthday parties, corporate fundraisers and other family/community events.

Above all, Perry wants to make it clear that JAM is for people of all ages who want to have fun after a hard day at school or work or whatever time they are in the mood to chase off the Dark Suits’ boredom.

“This is a place for everybody,” he said. “It really is.”

Just Amuse Me! Will adhere to mall opening hours at 10 a.m. but stay open later, until 10 p.m.every day.

Perry will have 35-40 employees at full build-out.

The Chronicle reached out to several community, civic and government officials about Amuse Me! Here is what they said:

—Citrus County Chamber of Commerce CEO/President Josh Wooten: “Dave and his team are visionaries. They have a proven track record in the tourism/guest service industry. This latest venture adds a new exciting concept for our residents and visitors. It has the potential to be a game-changer for the mall and will diversify our portfolio of things to do in Citrus County.”

“It’s something that’s a different product than what we have currently,” Pricher said. “There are very few indoor opportunities. This is something that we’re looking forward to being able to promote.

Just Amuse Me! Will give tourists and locals an alternative during rainy days because it’s all inside, he said.

—Crystal River Mayor Joe Meek recently called Just Amuse me an exciting venture and one that should help rejuvenate the mall.

“I think it will bring a lot of traffic to the mall,” Meek said.

What with Regal Cinema closed until July or August, the mall is in dire need of customers, she said.

“The whole mall community is very excited about working with his team,” she said. “(This) will bring some life and some traffic back in.”

Just Amuse Me! Is located at 1801 U.S. 19 in the Crystal River Mall, For more information, visit https://justamuseme.com/

Citrus County will soon have a new indoor entertainment center where folks can climb walls, ride an electric go-kart, find their way through a…