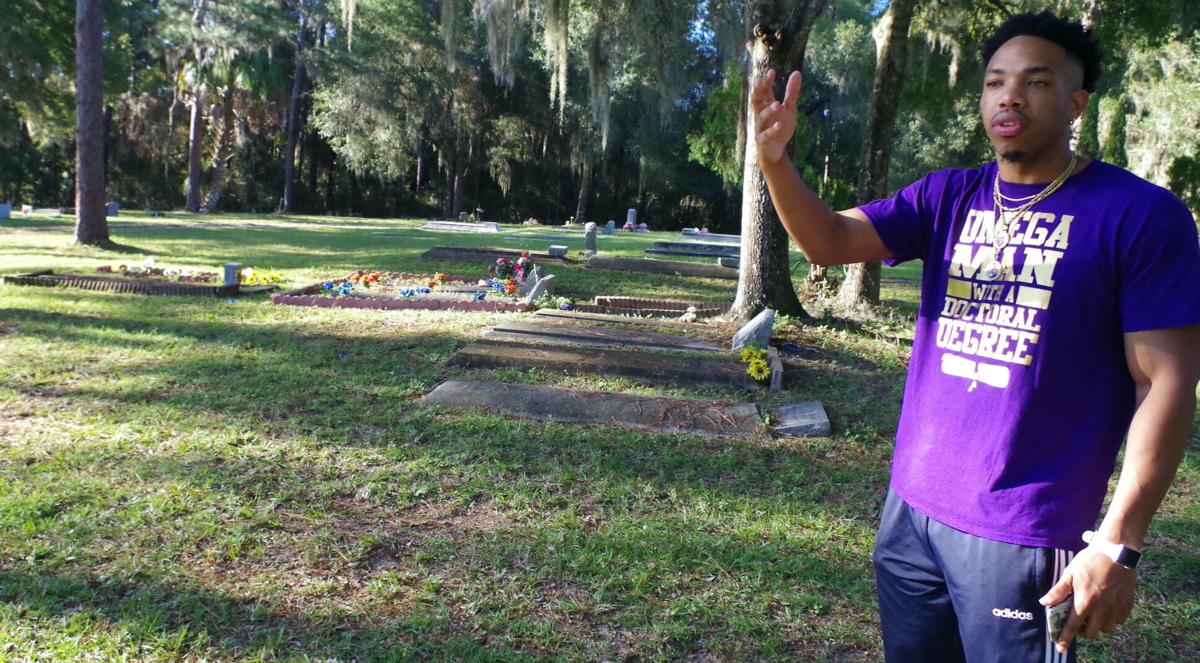 Inverness native Dr. Devonte White explains his idea to renovate Pine Hill Cemetery, a Citrus County-owned burial ground in southern Inverness for more than 322 known people, many of whom are Black. White would like to bring Pine Hill up to the aesthetic standard of the larger Oak Ridge Cemetery next door. 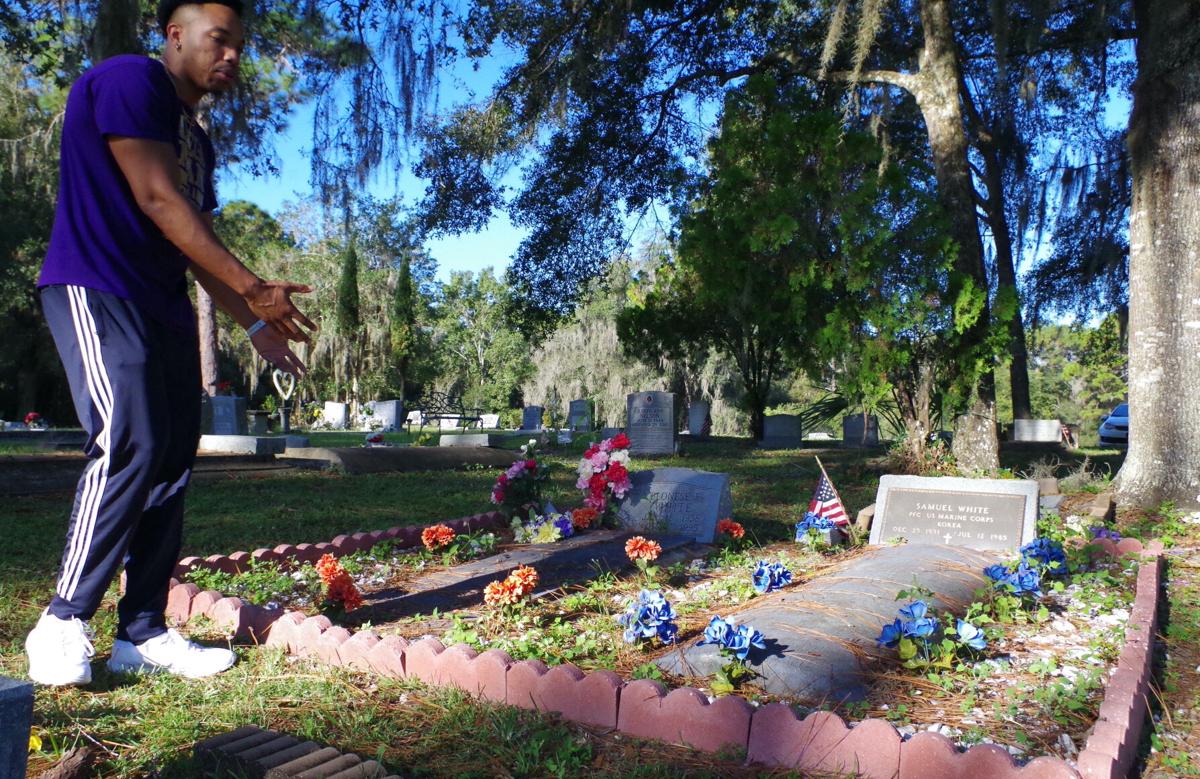 Dr. Devonte White gestures at the gravesites of his grandparents, Samuel and Blonese White, who were buried next to each other at Pine Hill Cemetery in southern Inverness. White said his grandfather was the first African American from Citrus County to serve in the U.S. Marine Corps. 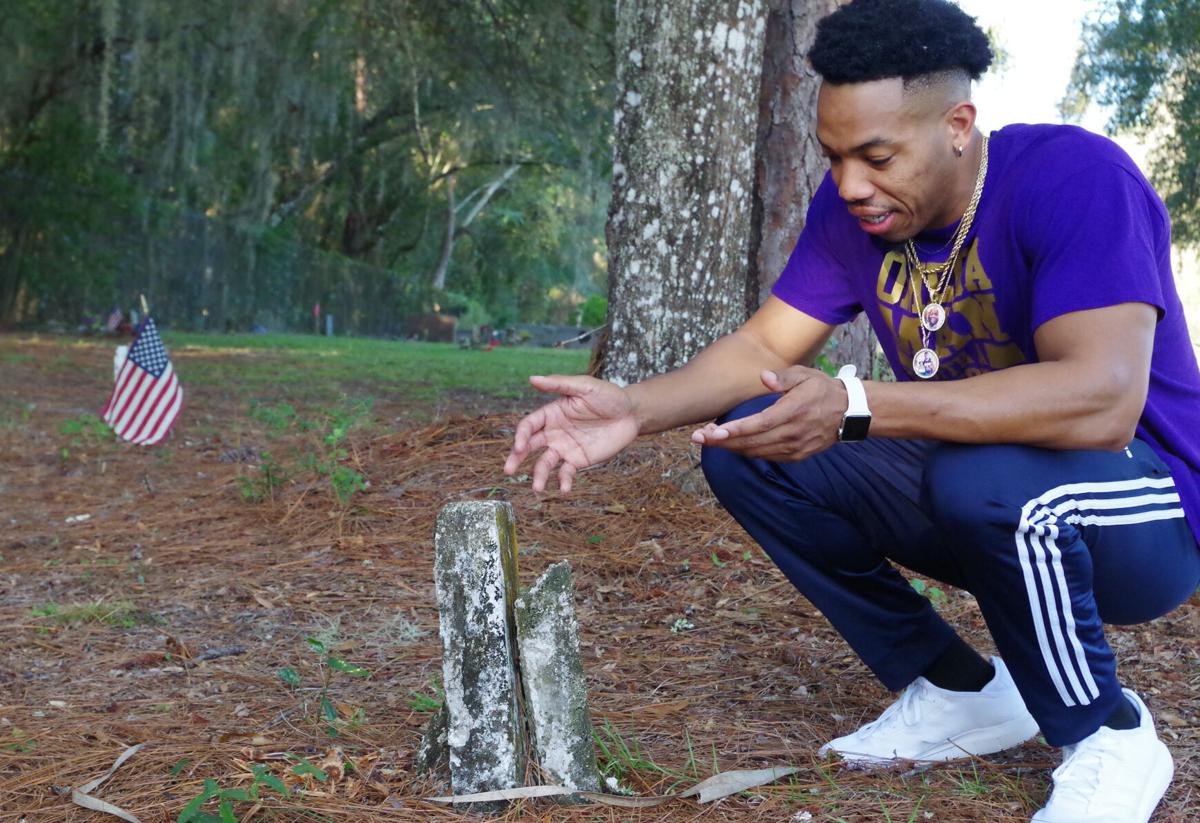 There are many unmarked limestone headstones throughout Pine Hill Cemetery in southern Inverness. Dr. Devonte White, pictured above, would like to work with the Citrus County Historical Society to identify those buried underneath them. 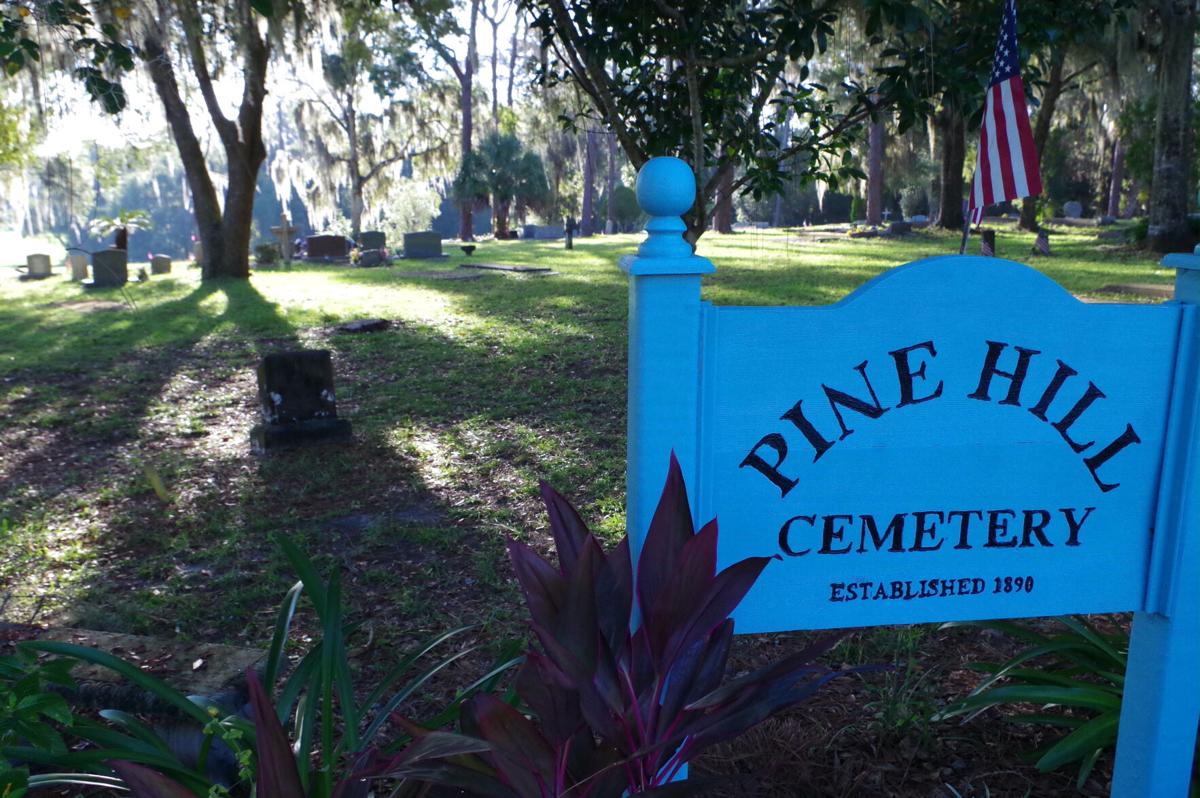 This is the main sign for the Pine Hill Cemetery in southern Inverness, near the corner of Hill Street and Line Avenue.

Editor's Note: Due to a reporter's error, this story was corrected to state Dr. Devonte White is an Inverness native. Also, White's uncle, Charlie White, is still alive. The Chronicle regrets the errors.

Surrounded by the 22-acre Oak Ridge Cemetery near the corner of Hill Street and Line Avenue in southern Inverness, the 1.8-acre gravesite for 322 known people has been trying to stay noticed throughout its 131-year-old existence.

“You wouldn’t know Pine Hill was even back there unless you had family there,” Dr. Devonte White said. “It is history, but I feel that history is being tucked away, in the back.”

White can’t say how many of his own relatives are buried at Citrus County’s oldest African American cemetery alongside the other longstanding county family names he grew up with.

“There’s a whole lot,” he said. “We know every single person out here.”

For as long as the 29-year-old Inverness native can remember, White witnessed a number of county residents and organizations preserve Pine Hill as best they could with weeding, mowing and tidying fallen Spanish moss and pine needles.

White stepped in himself to pick up trash and straighten out graves with others before and after he left his birthplace in 2010 as a Citrus High School graduate to get his doctorate and teach criminal justice at Bethune-Cookman University in Daytona Beach.

It wasn’t until a couple months ago when White noticed more was needed for the county-owned burial ground and its “stark difference” to the Inverness-owned Oak Ridge Cemetery across the small streets bordering Pine Hill.

“I wanted to find out why we have two cemeteries on the same land but look totally different,” he said. “It’s not a big cemetery. Why is it not being maintained as well as the huge cemetery over there?”

White isn’t a stranger to grassroots action. He spearheaded the 2020 renovation of the basketball court at Alexander Park in Hernando.

Now he's on a new mission to help bring attention, funding and movement to "spruce up" Pine Hill, and he’s already reached out to county officials for support and guidance.

County Administrator Randy Oliver said county staff, which mows and tends Pine Hill’s grounds, would be willing to partner with White like they did before.

“He did a phenomenal job with the basketball court,” Oliver said. “If he can achieve the same type of thing, I think that would be something positive for the community.”

White doesn’t want to be the only one suggesting improvements. He’d like to host town hall meetings with community leaders and elders who’d know what’s best for Pine Hill.

“They’ve earned the right to say, ‘Hey, this is what we should have,’ because they’ve been doing this longer than I’ve been alive,” he said. “I want to give a voice to the voiceless.”

White said he does want to focus on planting better grass, paving the single dirt road bisecting the cemetery and installing bigger and additional signage to help direct lost motorists to Pine Hill.

“A lot of times people just pass this thing and not even know,” he said.

According to Chronicle articles citing the Citrus County Historical Society, a land permit for Oak Ridge was granted in 1889 to Alfred Tompkins, the founder of Inverness, deeding it specifically for the burial of whites only.

Early after its establishment in 1890, Pine Hill Cemetery became the resting place for indigents and Blacks. No matter who’s buried at Pine Hill, White said, they deserve the same respect as those interred just next door.

“There’s no mistaking that one cemetery looks different than the other,” he said, “and it’s been going on long enough to where the voices for Pine Hill have fallen on deaf ears ... so I want to be that spark.”

Lettering on many of Pine Hill’s cluster of headstones — some just simple limestone markers — have weathered away. White said he’d like to work with the county historical society to identify unnamed graves.

Samuel White, White’s grandfather and the first African American from Citrus County to serve in the U.S. Marine Corps, was buried next to White’s grandmother, Blonese.

Antonio Hicks, the 16-year-old Citrus High School student-athlete who collapsed during a football practice in late September, was laid to rest at Pine Hill Cemetery.

Friends, teammates mourn the loss of CHS football player known for his smile, his friendliness and his faith

For many years until the 1980s, Eli White from the East Dampier Street Funeral Home oversaw Pine Hill.

Inverness offered to take it over after the city got the title for Oak Ridge Cemetery in 1981; however, local Black churches took over responsibility instead.

After teenagers used Pine Hill as their hangout, the Citrus Garden Club in October 2001 adopted the cemetery, where they’ve organized volunteer cleanups four times a year since.

“It’s in our mission to beautify,” she said, adding the public’s welcome to join the garden club for its next cleanup on Nov. 10.

Club members, along with the VFW, also plant flags on the graves of Pine Hill ahead of Veterans Day and Memorial Day.

Historic Inverness cemetery gets a clean up

Pine Hill, White said, is too important to be ignored.

Have an idea how to improve Pine Hill Cemetery in southern Inverness?

A local community expressed its disappointment over the state of Citrus County’s Pine Hill Cemetery in southern Inverness, but its voice wasn’…

After becoming a community focal point, Citrus County's Pine Hill Cemetery got some upgrades from its owner.